A walk with motivation

It was a fine sunny start to the day, so Meg and I set out for a walk, armed with GPS and camera. We headed south, over the marina footbridge then across the main road and disused railway, into farmland.

Looking back to Braunston Church. 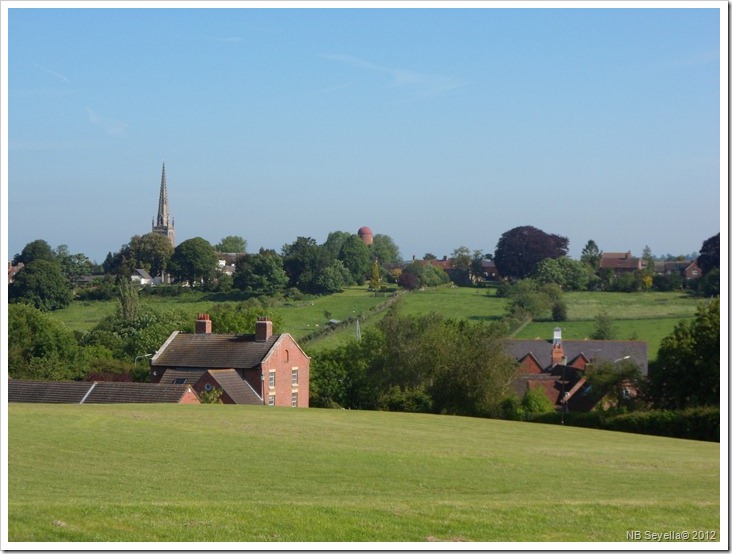 The dome top of the now sail-less windmill is just visible through the trees to the right of the church.

The footpath took us across a field of bullocks, luckily a distance away and therefore not all that interested in two moving specks on the horizon.

Most of the fields crossed were planted with ripening wheat or corn, and some paths were more clearly defined than others.

A good path across a corn field….. 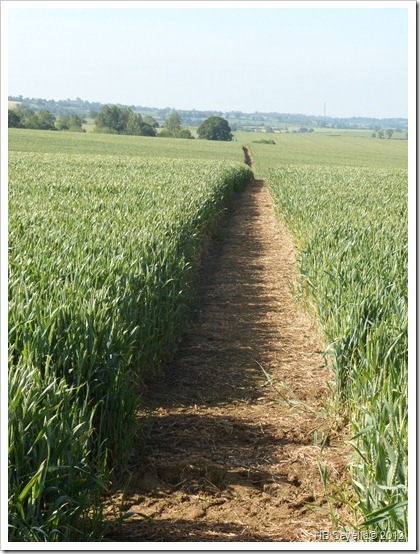 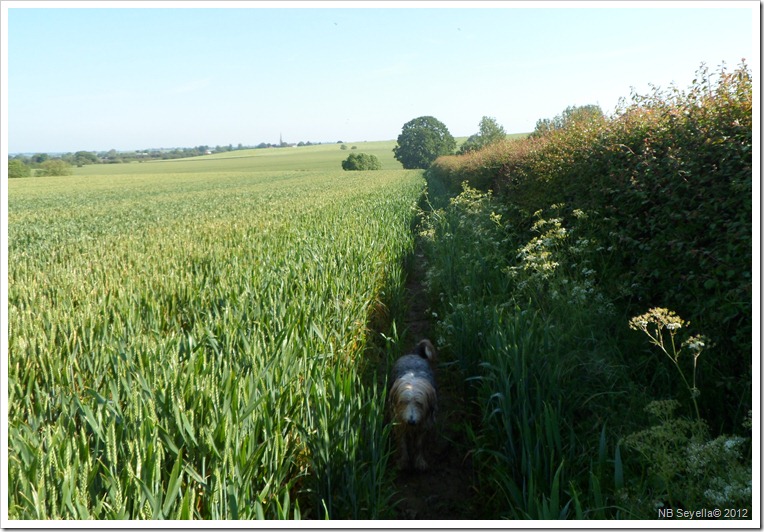 Meg is looking miserable because she’s wet through, as was I from the waist down. Last night’s rain and this morning’s dew had left the stalks wet, and this moisture soon found new homes.

Past Berry Fields Farm and we turned westward and then back to the north.

Looking back, south to Napton Hill 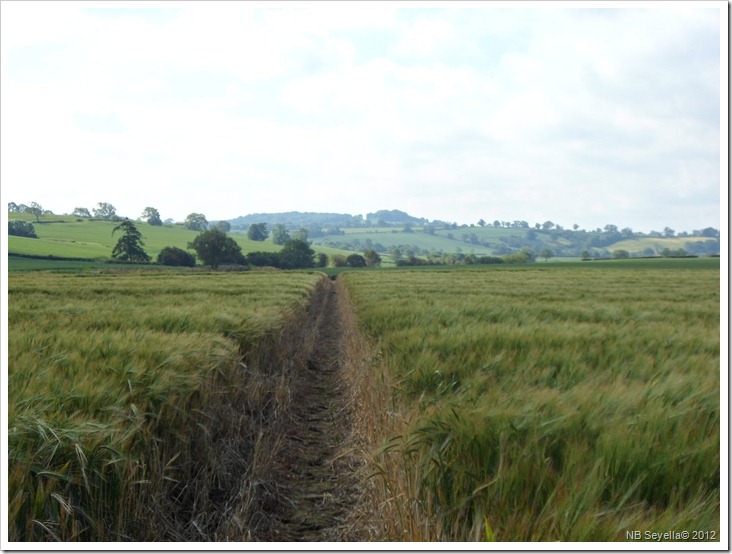 We were now getting close to the reason for choosing this route. If you’ve read the blog over the last few days you’ll know that the Oxford Canal was modernised in the 1820s, loops and meanders on the old contour route straightened using cuttings and embankments. You really do need to visit this site if you’re interested.

Another of these redundant loops runs from the marina in the middle of Braunston, south and west to rejoin the existing navigation near the village of Wolfhamcote. We’d walked parallel but a distance away from the southern leg, and further south, but now heading north we were bound to cross the old course. The trick was recognising it! It’s been nearly 200 years after all.

The bridleway we were now on headed directly towards Wolfhamcote Church and I reckoned that the canal would have intersected somewhere not far south of the dismantled railway.

My first clue was a hawthorn hedge, traditionally the windbreak and boundary planted on the towpath side of the canal.

There’s the hedge, just visible over the bean crop. 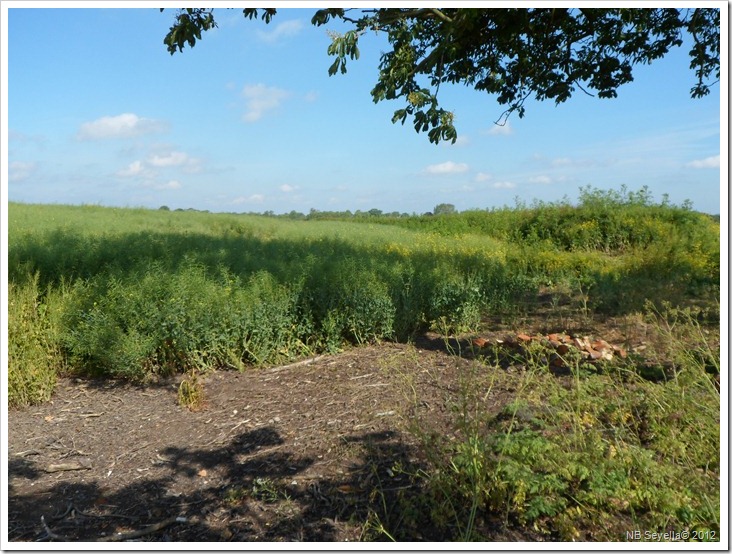 And the clincher, a very muddy area on an otherwise fairly dry track. The canal would have been puddled with clay to hold the water in, and, even though it’s now been filled in, it’s still performing that function. 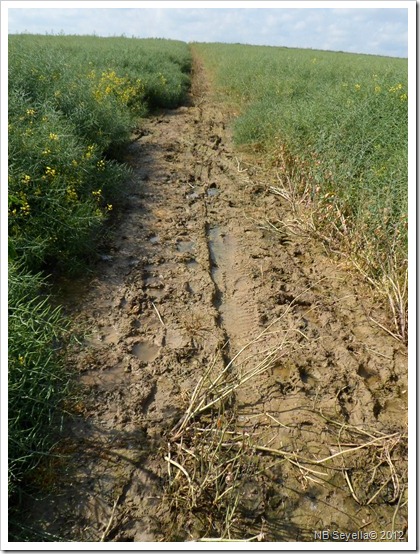 From this point the course was north west, heading towards the brick railway bridge in the distance…. 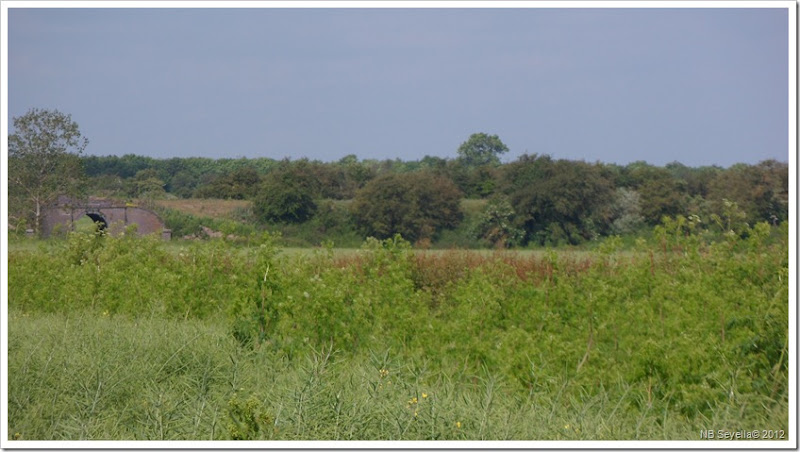 …but doesn’t go through it. Another old railway line, heading north/south, tucks through here. The canal turned northeast before the railway embankment, through the embankment (bearing in mind it wasn’t there, then) then joined the last section still in water, next to Wolfhamcote Hall.

A puddle in the canal bed near Wolfhamcote Hall. 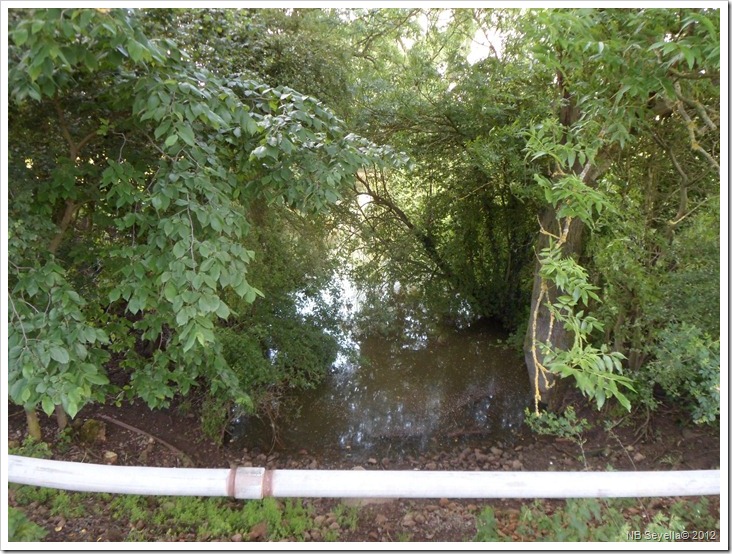 The channel has been filled again here to improve farm access, but is then still in water until it intersects the “new” canal near Bridge 97.

Satisfied that I’d found pretty well all there was to find, we set off along the farm track back to Braunston, past Wolfhamcote Church. 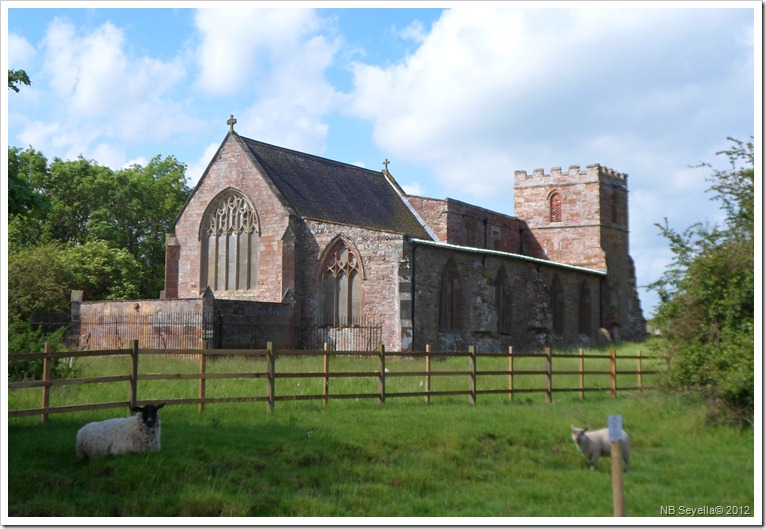 Sadly no longer used for worship the building is still consecrated and maintained. The key is available from the cottage nearby.

The track is unfenced , the fields grazed by sheep that showed little or no interest in one man and his dog. 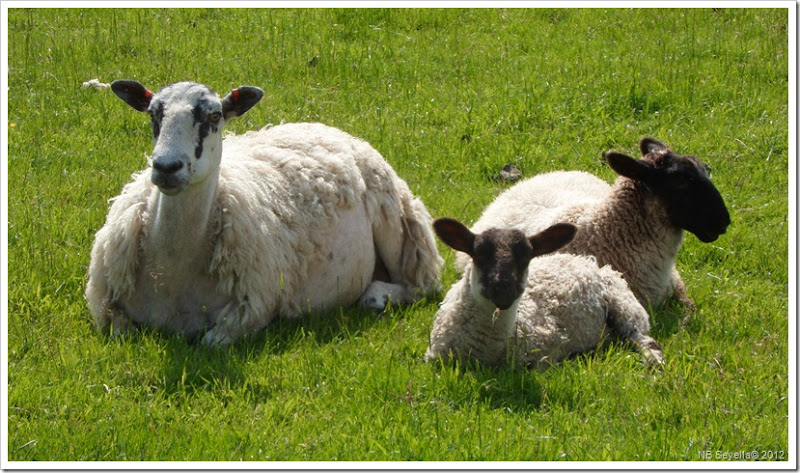 We had one final near encounter with the old canal as we neared Braunston. It headed towards the existing course across the pasture to our right, but the only evidence now is a slight embankment curving towards the trees in the distance. 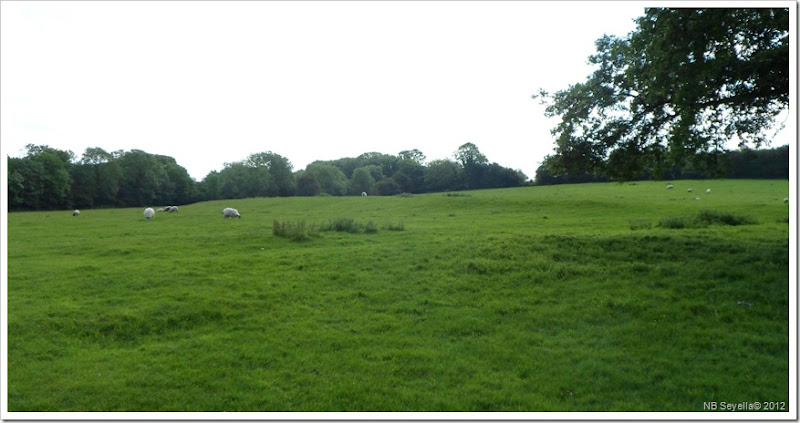 So that’s is, a very enjoyable 5 mile stroll, good weather with a bit of interest thrown in. A fine start to the day.

We had a planning meeting with George and Carol on NB Rock’n’Roll deciding finally to head down towards the Thames via the Oxford Canal. The Nene is just too iffy a the moment; it’s still got a Strong Stream Warning issued, and the EA chap reckons it could be another week, and that’s only if we don’t have much more rain.
We’ve both bought Gold Licences this year which entitles us to use the Environment Agency rivers without any further charges, so at least we’ll get some use out of them if we get to the Thames.