Making a start on heading south…

Purchases made, Meg walked it was time to move out of Braunston. First we had to reverse to the winding hole to turn around, luckily only a hundred yards or so.

Turning (winding) at the entrance to the marina 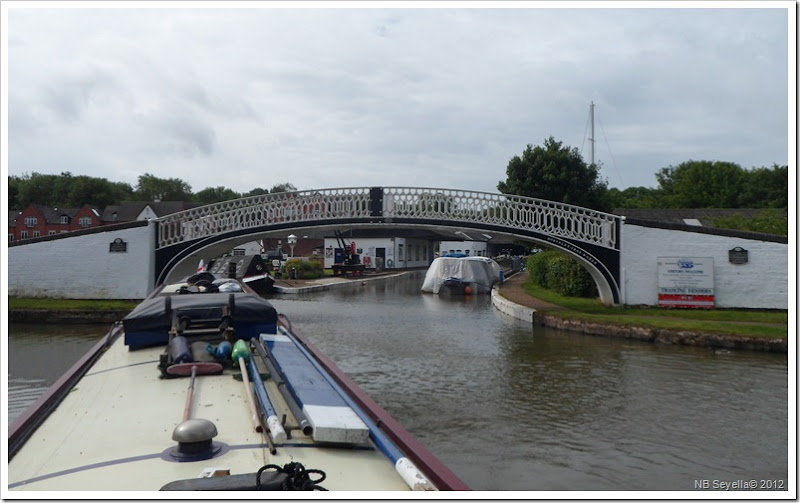 One explanation of the term “winding”(pronounced with a short i, not as in  “finding”) is the practice of using any available wind to help turn the boat. I was able to do just that today; the southerly coming through the bridge ‘ole started the turn as I reversed. Then it finished it by pushing the fore end around. Easy peasy!

The bridge in the picture above, Bridge 91a, was at the point where the Oxford Canal turned onto the abandoned loop I explored yesterday.

We passed NB No Direction on the moorings near the Boathouse, Ray stopped by for a quick chat yesterday afternoon, but we’ve missed the opportunity for a longer get together. Have a good trip back north.

NB No Direction. Next time, folks 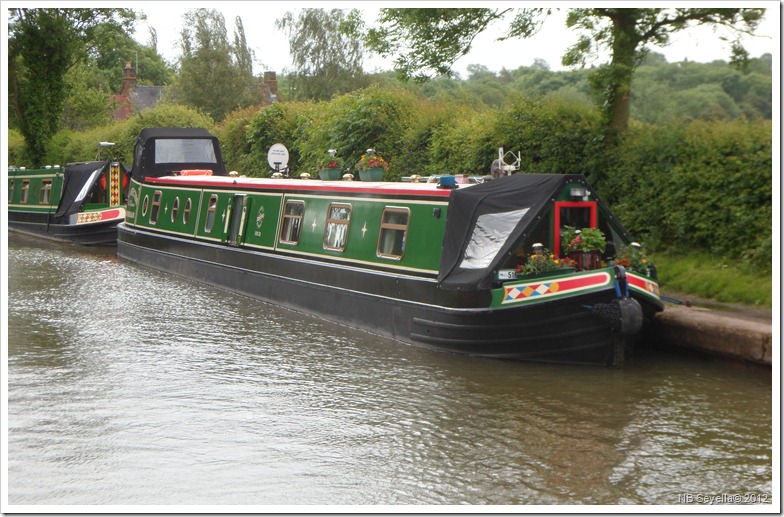 A quick stop for the facilities afforded by the al fresco sanitary station near the main road bridge then we were turning left at Braunston Turn. 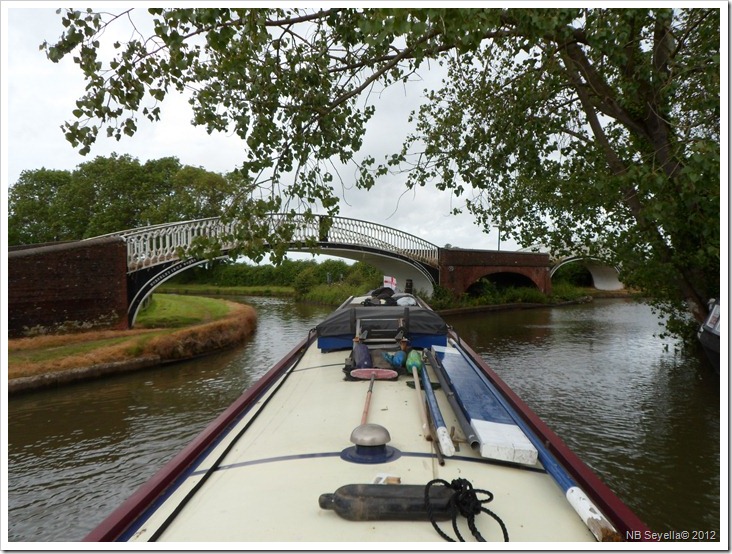 The split junction with a triangular island makes it easy to make the turn from any direction, but you have to watch out for oncoming traffic!

The day had started bright but breezy after heavy showers overnight, and managed to stay dry till after we’d got moored up. A couple of short sharp downpours this afternoon damped things down a little.

There’s a long straight, a legacy of the 1820s modernisation program, over an embankment and through a short cutting to Wolfhamcote, where the original route and the new course recombine.

The original line emerges on the offside amongst this belt of trees.

This section includes a short aqueduct over the River Leam and is know as the Puddle Banks. Quite how it got this name I’ve yet to discover, maybe there were good quantities of puddle clay (used for lining canal beds and therefore a valuable commodity) found here? Answers on a postcard, please….

The Puddle Banks have long been known as the canal boat equivalent of the legendary Elephant’s Graveyard. There always seem to be several old wooden boats along here in various states of disrepair.

I reckon the second one is definitely sitting on the bottom… 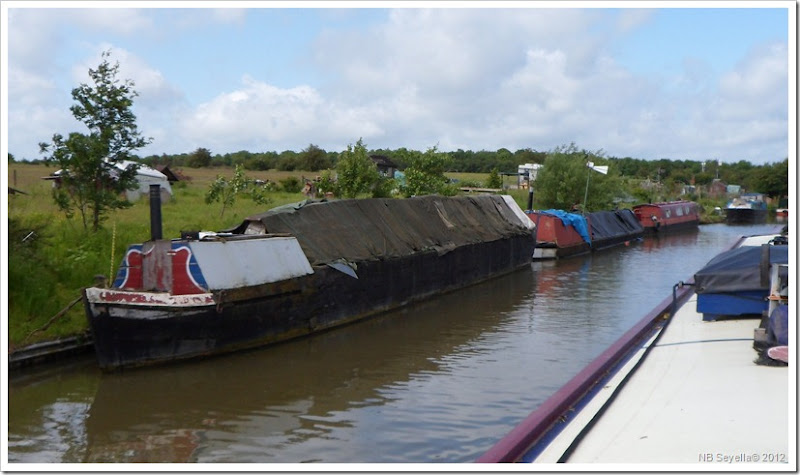 As is this sorry chap on the towpath side a little further on. 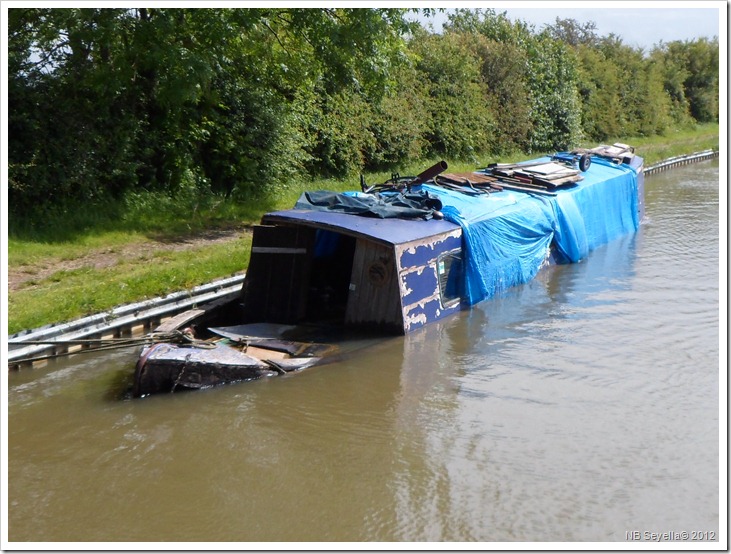 Such a shame. It was once someone’s pride and joy, now it’s only fit for breaking up.

We toddled on just a little further, pulling in just past Bridge 99. 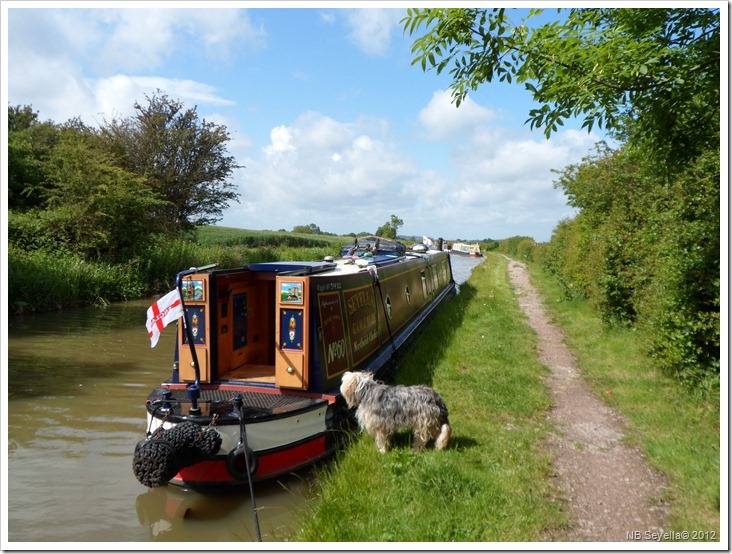 I know, we’ve not got very far, but even though it was sunny when we stopped those showers blowing over were quite nasty. We’d managed to stay dry and I wanted to keep it that way.

George and Carol joined us a little later, mooring in front. They’d a bit of shopping to do before they could leave Braunston.

The forecast for tomorrow is pretty dire, strong winds and rain, so we’ll be staying put, moving on on Sunday. Maybe.