Did you ever have one of those days….

…..where you wish you’d stayed in bed?

I suppose it started on Saturday night, when some young oick took a liking to the Union Flag attached to the swan’s neck. We were in bed and felt the boat move, then a figure running past the windows. At £2 for 5 flags it just wasn’t worth getting up for.

Today started well enough, Meg and I had a fine walk around the common land to the north of the town. 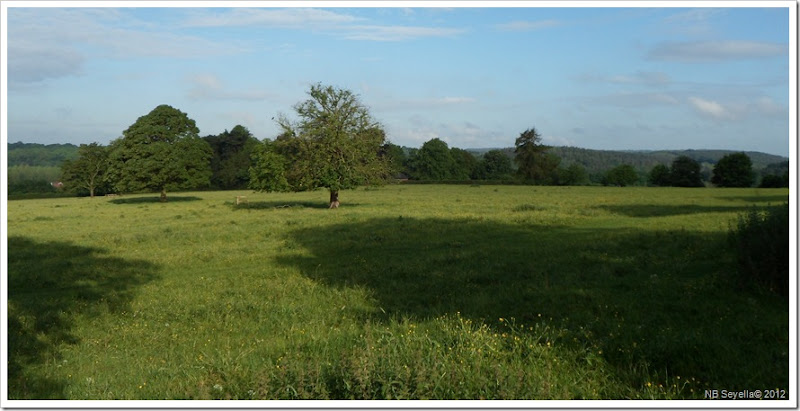 The Duke of Cumberland camped here with his army on the way to meet Bonnie Prince Charlie at Derby. This was in 1745, during the second Jacobite Rebellion. It didn’t go any better than the first; Prince Charles Edward Stuart marched his army of wild Scots down into England in the hope that English Jacobites would join in his quest to regain the throne for the Stuarts.
They didn’t, and the Duke didn’t even need to draw his sword at this point, Charles was advised that he was over-exposed and lacking support so turned around at Derby and headed home. Pursued by the combined armies of Cumberland and General Wade (no relation), the drama came to a bloody conclusion at Culloden the following April.
The Stuart cause was lost and the spectre of civil war dispelled.

We returned back through the town and then along the towpath. 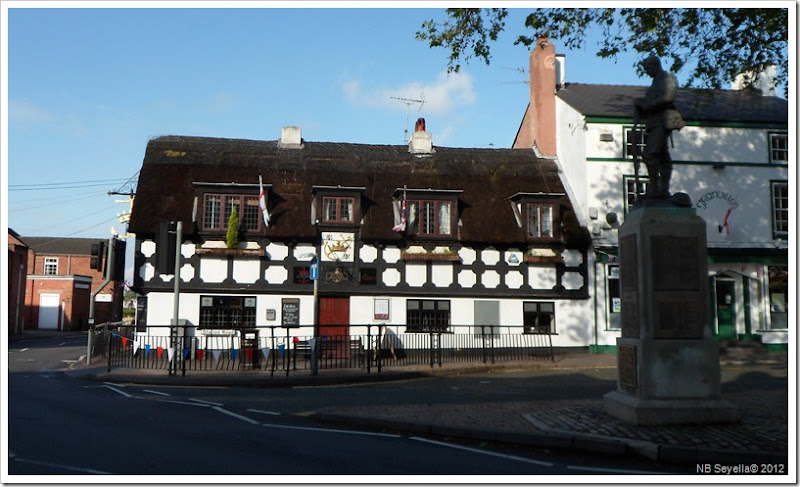 Not much bunting on the High Street. 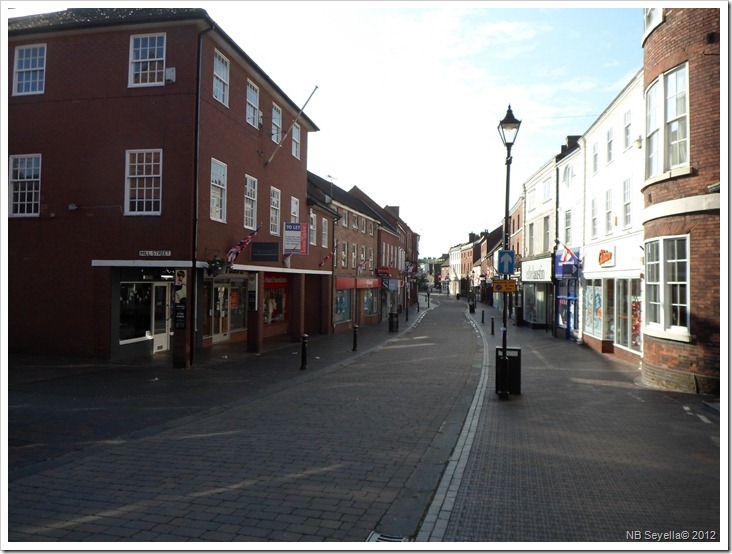 Things started to go awry when we got back; one of our fender hangers had snapped, luckily the fender (a go-kart tyre) was still floating alongside. 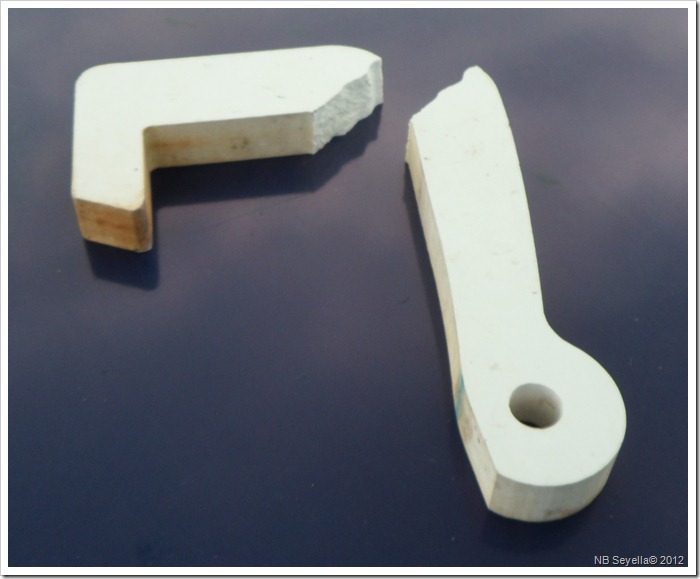 Then I went up to the Co-op for some basics before we left and had to wait 15 minutes for them to open.

Things were looking up as we set off down the locks through Stone, we got away just before a convoy of boats coming down from Meaford, so had the advantage of locks filled by a steady stream of boats coming up. 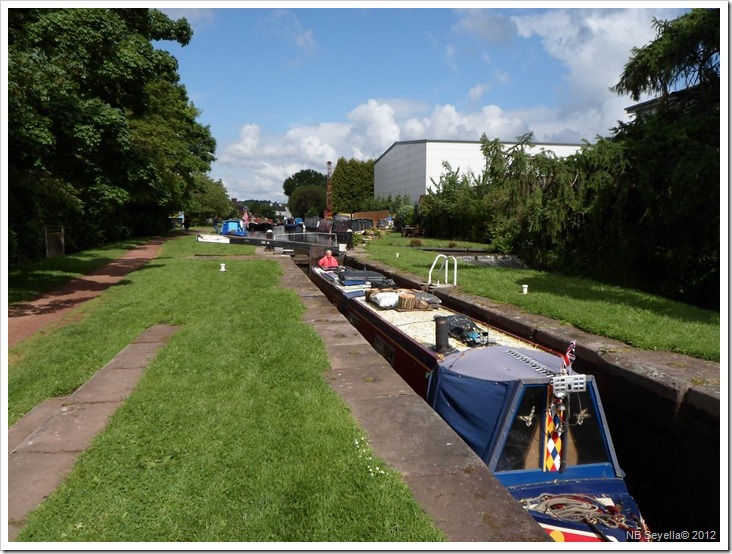 Some of the boats that went up to Etruria for the weekend arrived in Stone last night and had moored near the lock.

Butty Ilford has a curvaceous bottom 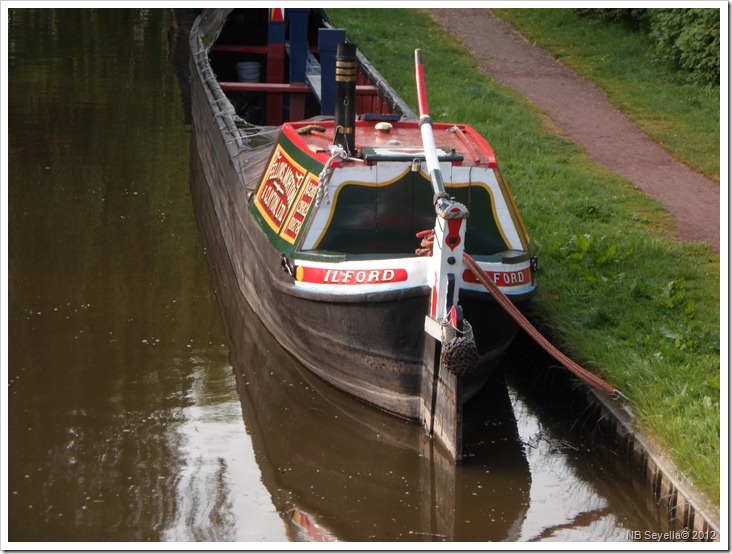 Perch, Sweden, Ibex and an anonymous work boat in primer above the lock. 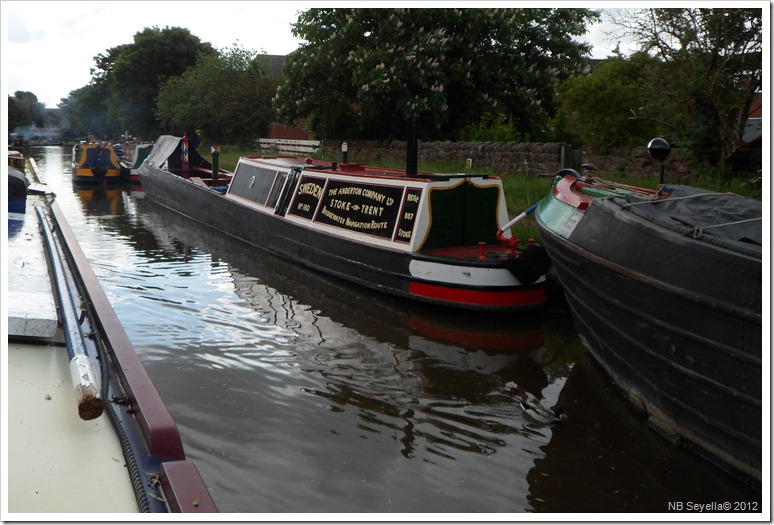 In the boatyard opposite is an Ovaltine boat. 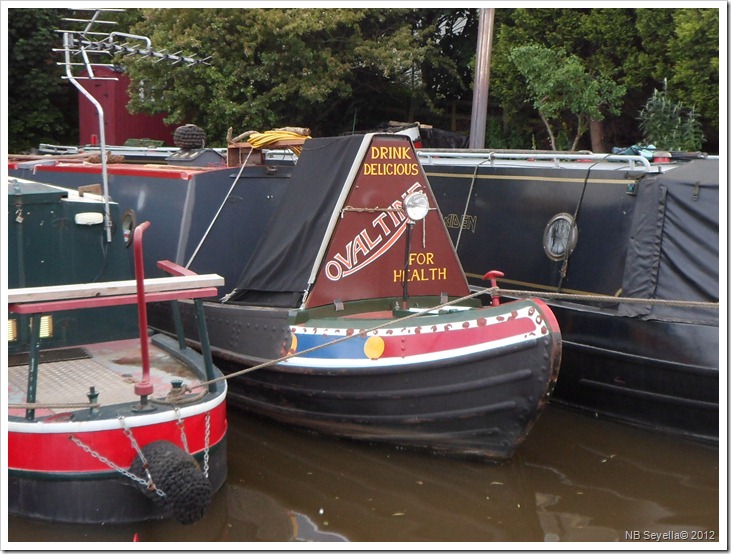 We would have liked to use the services directly below Newcastle Road Lock but it was busy, with a queue waiting, either for water or for the lock, and that convoy was snapping at our heels….

Through Yard Lock and then into Star Lock, with just a short wait for a boat coming up. 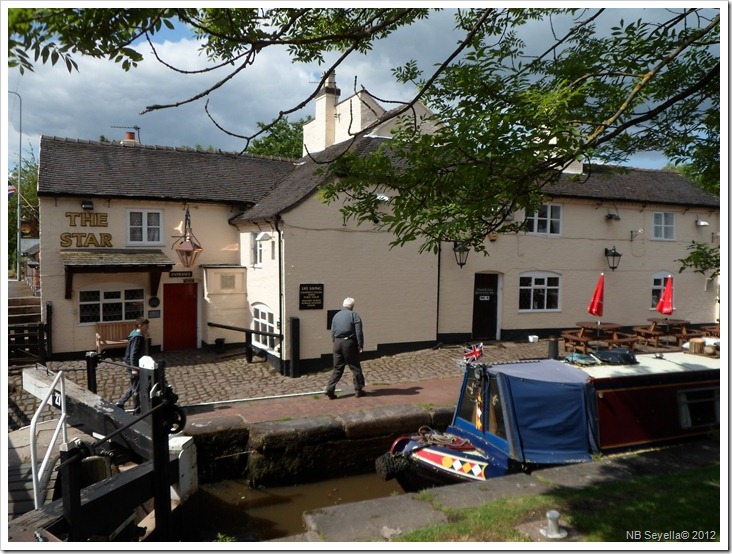 It was here that the next hitch occurred. Mags called me to the back - “we’ve got a red light on”. It was the charge warning light for the domestic alternator. Bugger.

Out of the lock and we thought we’d fill with water at the tap just below, while I had a look to see if it was just a drive belt failure or something more serious. There was a boat on the water point, so I lifted the engine covers to have a peek. Belts intact but a very hot domestic alternator. Bugger again.

Then the guy on the water point was taking forever to fill his tank, then a dozen plastic bottles, then coil his hose… Had enough, let’s get going before we get involved with the boats coming down behind.

The mile and a half to Aston Lock passed pleasantly enough, with an eye on the charge rate to make sure the engine alternator didn’t commit Hara-Kiri as well. At Aston we had our next episode in today’s catalogue of woe. Four boats were in front of us waiting for the lock! FOUR! Where did they all come from?

Shuffling up boat by boat and helping the earlier boats up or down, we got there in the end.
One advantage of having a queue is that you’re often told to get back on board, the following crews then look after the lock.

Unusual view for me, I‘m normally up there! 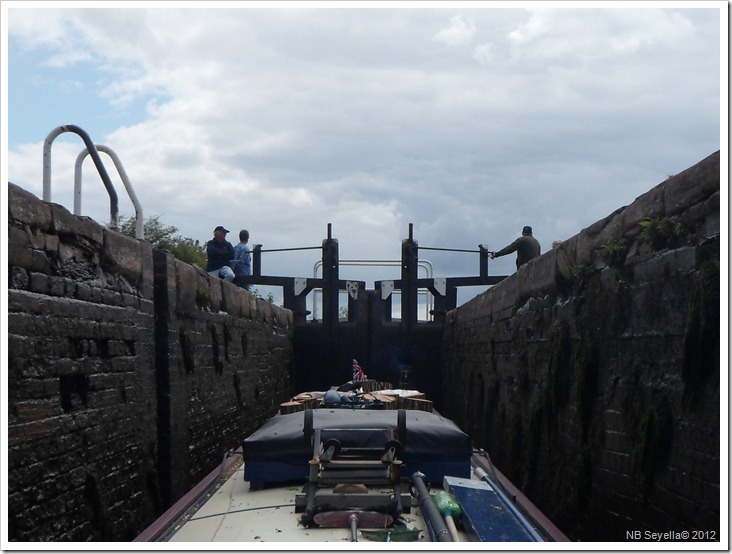 Cruising past the relatively new Aston Marina I started to think things were looking up. The queue at the last lock should have broken up the convoy, Sandon Lock should be quiet by comparison. 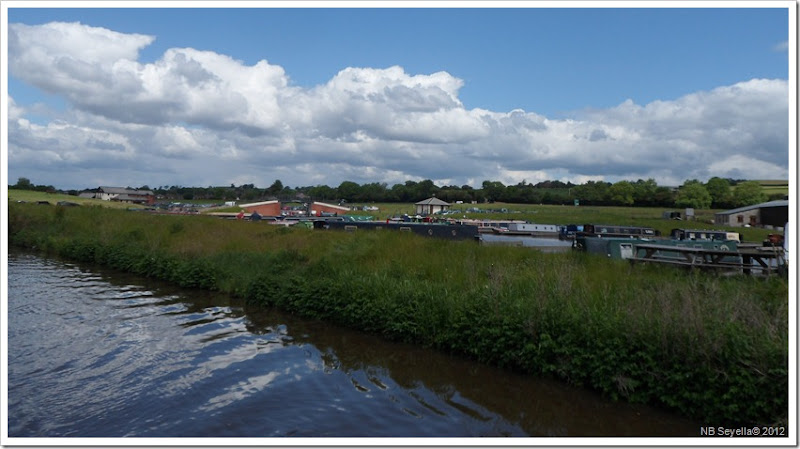 We didn’t even get there! Either side of Carr House Bridge, No 89, BW had left workboats tied up for the weekend. I use the term “tied up” loosely, that’s just how they were, tied up loosely!
Through the bridge ‘ole we could see a push tug attached to the bank with just a fore-end rope, the stern across the cut. So Mags pulled in and I got off to pull it back round and sort out the bits of washing line used as mooring ropes.
That done, I looked back and saw a hopper with a couple of tons of puddle clay in it now drifting along behind us! As we’d passed (slowly) it must have been the last straw for the overburdened bits of string.
That took a bit of sorting out, getting onboard was a challenge, then I had to take a line ashore to pull it back to the bank. Meanwhile, a steady stream of boats were idling their way past. Remember those boats following us out of Stone? Well, we were now following them! As well as a few recently emerged from the marina!

Another of the boat moorings needed a bit of remedial work, and by the time I’d done that I‘d had enough. I didn’t look forward to another long wait in another long queue at Sandon, so we pulled in just past the BW boats, calling it quits for the day. 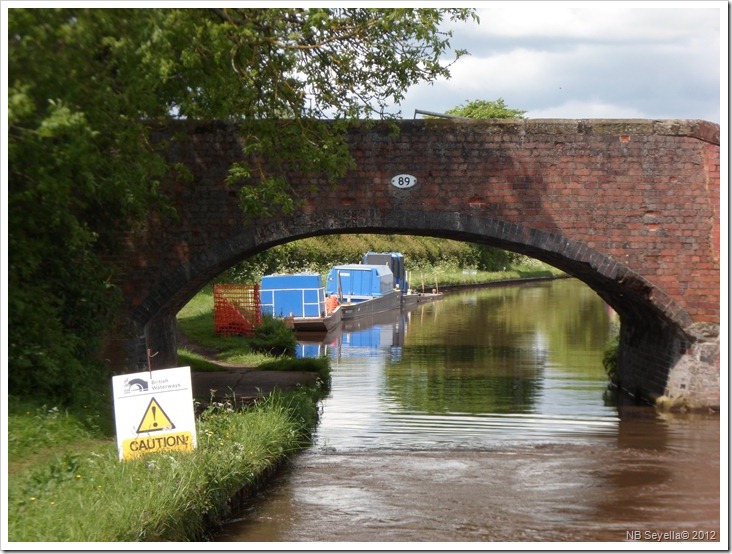 And the day started so well!

Still, it finished OK. I fitted our spare alternator, so that sorted the charging problem out, and then repacked the stern gland, a task I’d scheduled for when we’d stopped anyway.

We spent all yesterday afternoon glued to the TV, hoping for a glimpse of NB Indigo Dream and Sue in her greyhound costume in the Pageant. We were a bit disappointed that the narrowboats got so little airtime. But I suppose the same applied to all the groups represented. So many boats, so little time.
It could have been a better day, but it looked like fun was had by all. Have a look at Indigo Dream’s and Herbie’s blogs…

Not sure what we’re doing tomorrow, it’s supposed to be a bit grim again. We’ll see….

Only once in a while is the answer. Hope you have got it all off your chest after all that writing! :-))

Aaah, feeling much better now, thanks!

Piggin’ ‘ell, what a day, I was so exhausted after reading it, I had to pour myself a glass of wine! Things could have been worse though...........it could have been raining!! Take care you two.

I made do with a (very) large whisky!We saved the rain for today....

Thanks for sharing, and I do hope you'd have a great day too tomorrow!

Thanks for the comments, Albert. We did...!