18½ miles, 1 lock, over 6 hours in the rain? We haven’t done that for years! I can’t think of a good reason why we did today, either.
We could have moved yesterday when it was fine and dry, but I got stuck into a few jobs that needed doing instead. And Meg got a good long walk in the morning, too.

Up above Hartshill, near the site of an Iron Age hill fort

You can see why they chose this spot. Mancetter, on the edge of Atherstone, is behind the trees on the left.
There was a Roman settlement here (Manduessedum) on Watling Street (now the A5) and it’s believed that in around 60AD Boudicca and her Iceni tribe fought and lost a last battle against the invaders around here. Rather than capture and humiliation, the Briton queen poisoned herself.
I suspect the seat is relatively more modern… 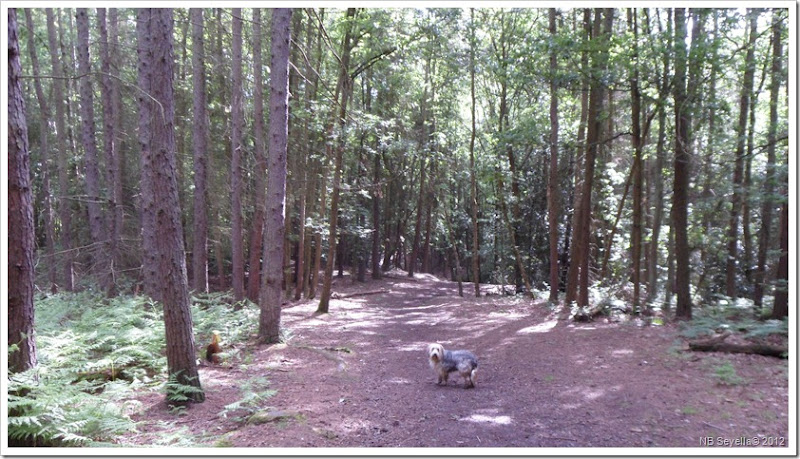 Washing and polishing the bankside of the boat, cleaning the windows and a bit of brass,  and giving the inside a good going over took most of the rest of the day, with a break for roast pork, roast spuds and cauliflower cheese. Smashing.

So this morning Meg and I had an early walk in the dry, but by the time we were ready to go at around 08:20 it had started to rain. Half a dozen boats had already gone by, including Bruce and Sheila, NB Sanity Again. Sorry I didn’t shout, guys, I’d just got up and was in a state of undress! 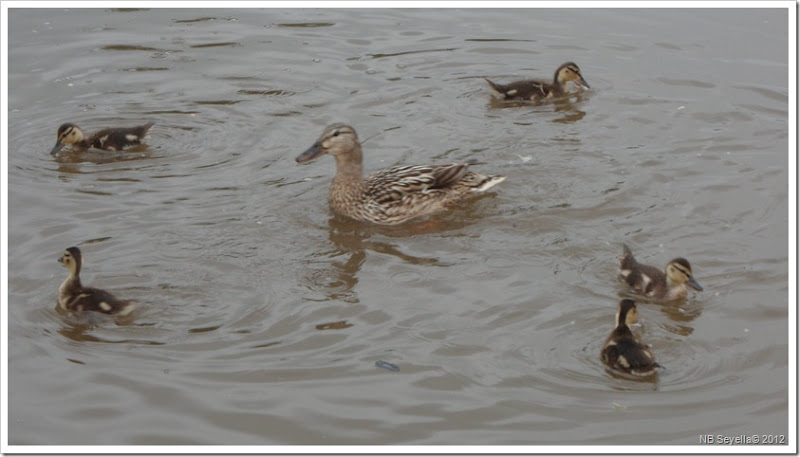 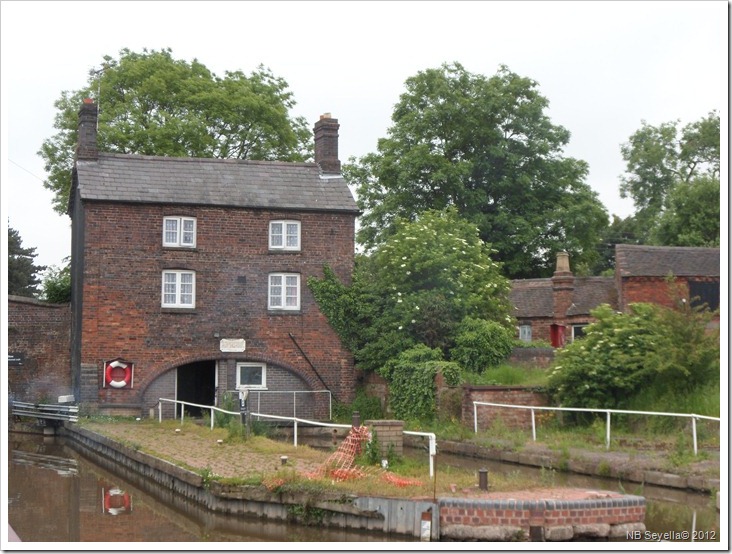 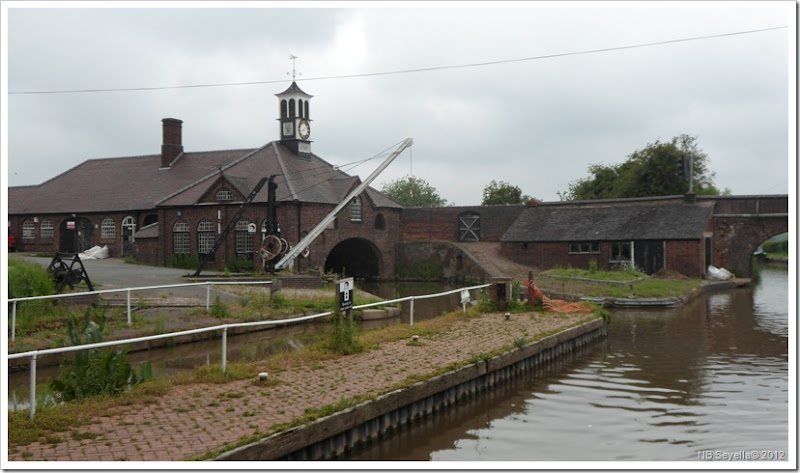 The buildings here are contemporary with the canal, about 1790.

That’s funny, they seemed to be going quite fast yesterday… 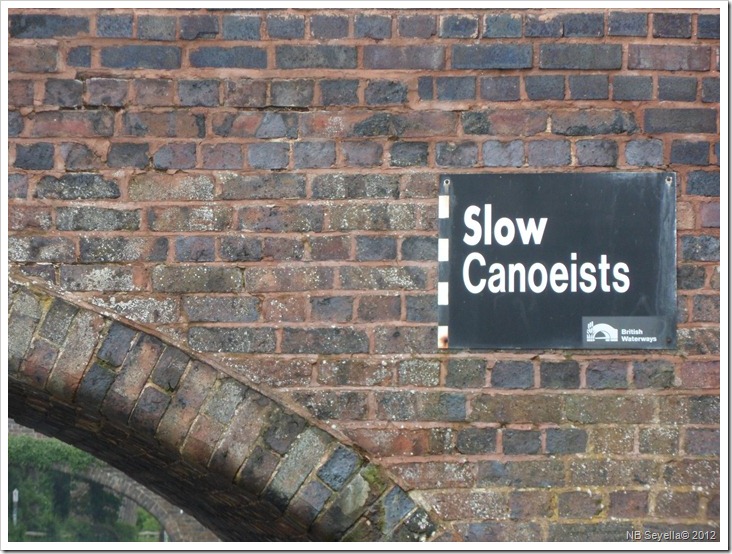 This area’s main industry was and still is quarrying, the underlying granite being of a particularly good quality. Sorting at Judkin’s Quarry near Camp Hill has produced a conical heap of spoil, known locally as Mount Judd. Under conveyor bridges near Judkin’s 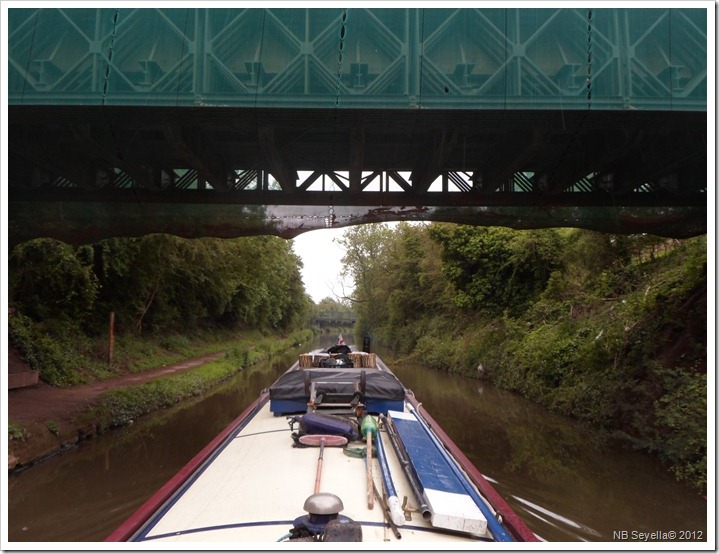 Nuneaton was a bit of a surprise today. The town’s not known for it’s caring attitude towards the canal, in fact on one trip we encountered a three-piece suite, coffee table, fridge and washing machine in the canal. No discarded furniture or appliances at all today, but then my faith in human nature was restored when I spotted a large slab of Kingspan insulation.

But no, what’s this? A local chap retrieving it for disposal! Well done Nuneatoners! 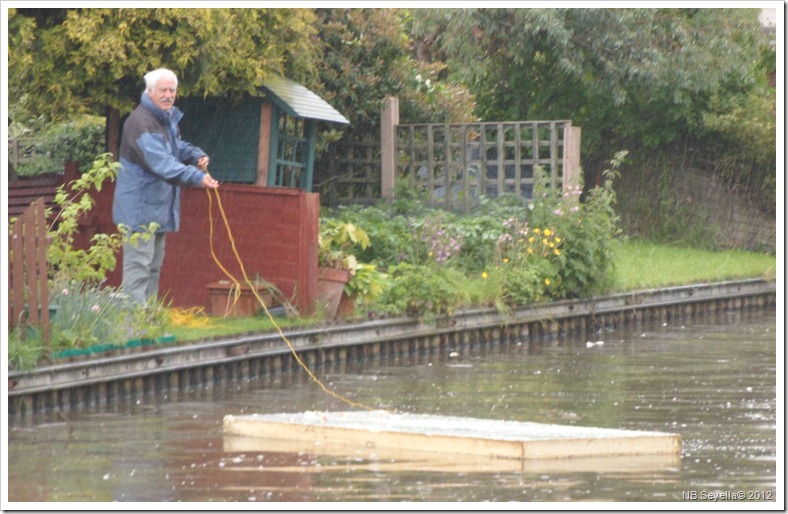 Past the always busy Boot Wharf and you start to leave the built up area behind, heading towards Marston Junction where the delightful Ashby Canal sets off eastward. 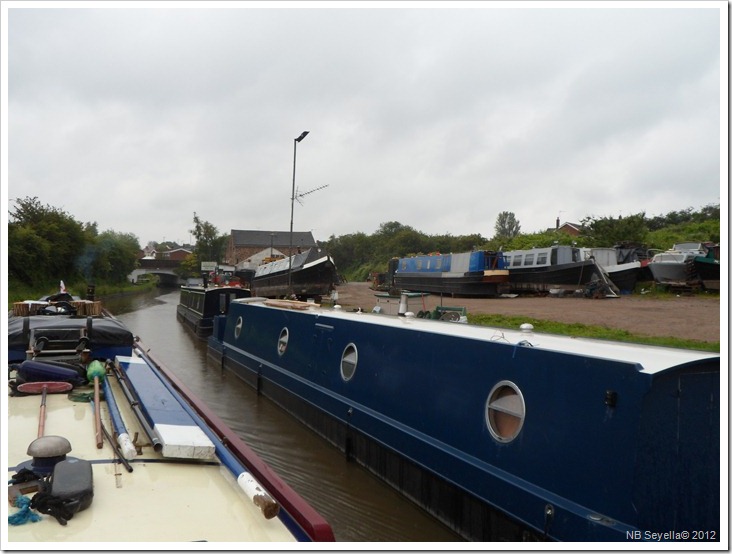 They were craning in and out last time we came past.

An old colliery arm, this one once led to the Griff Colliery. 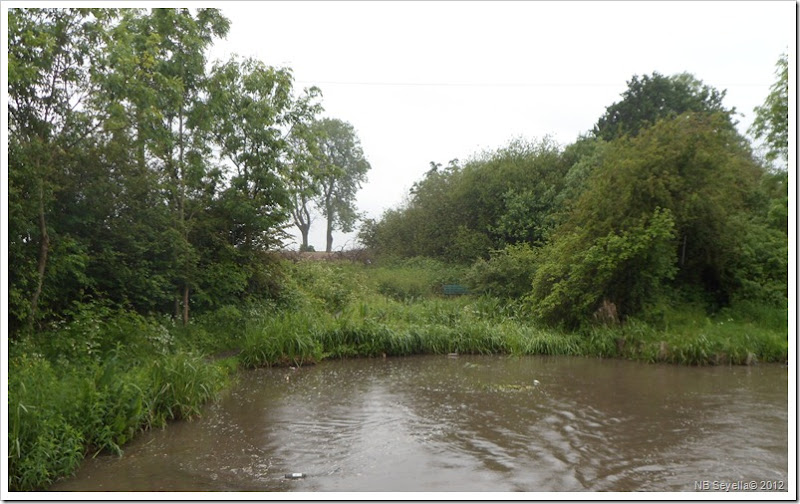 This is just before Bridge 18, called by Nicholson’s guide “Turn Over Bridge”. Traditionally turn over or snake bridges swap the towpath from one side of the navigation to the other. Not this one though. 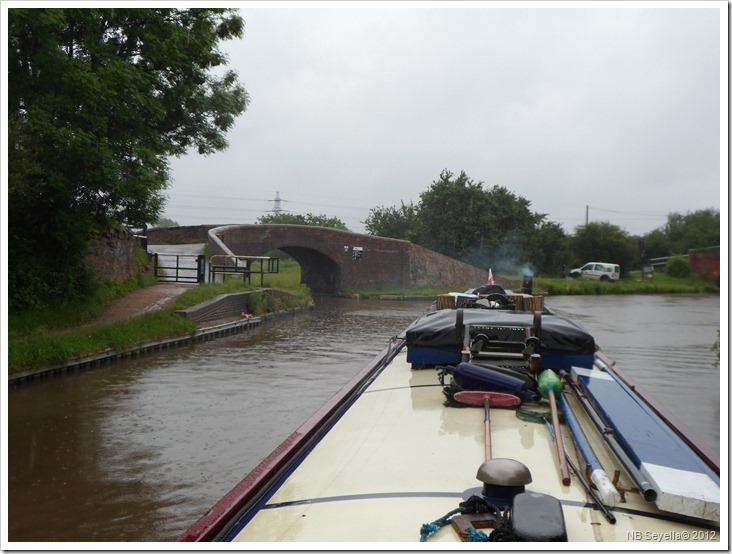 Charity Dock sits on the offside on a bend soon after the junction. It doesn’t seem to change from year to year…. 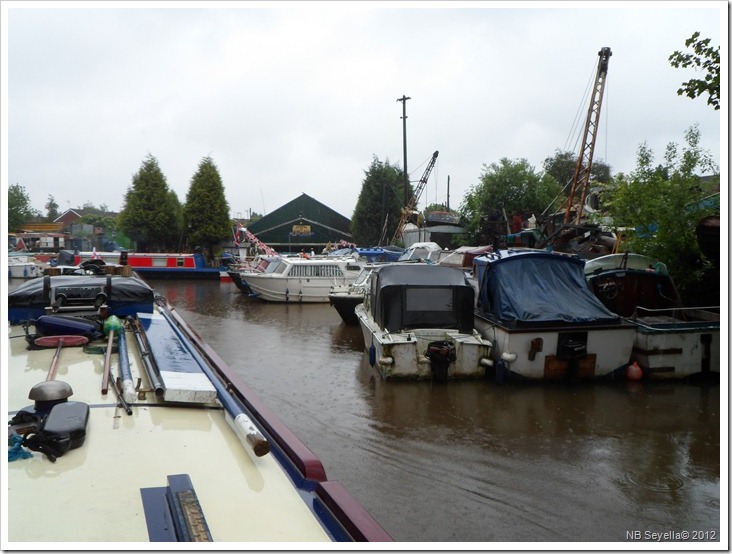 There’s another colliery arm, this one for the Newdigate Colliery, a mile from Hawkesbury.

Newdigate Colliery Arm to the left 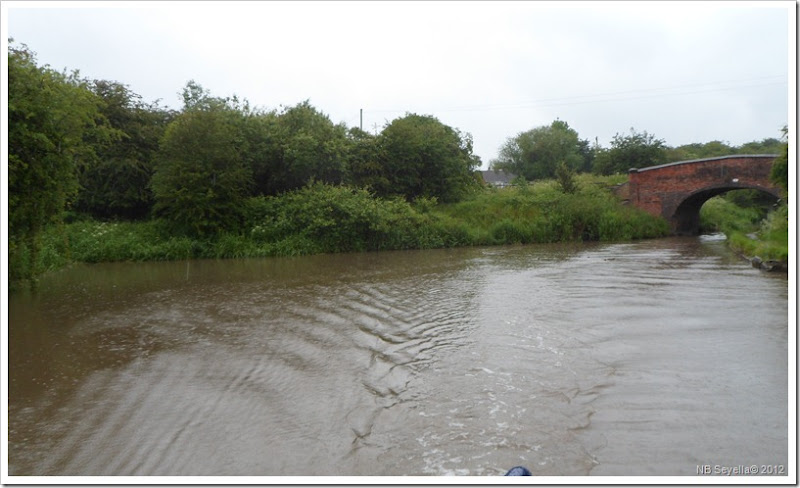 Margaret Cornish, in her book about the Idle Women, Troubled Waters, talks about loading here at Newdigate and at Griff during the war years.

Saw a pair of coots around here. Unlike the mallards and moorhens, these birds (fowl?) seem to be very localised. Some waterways don’t seem to have any at all. 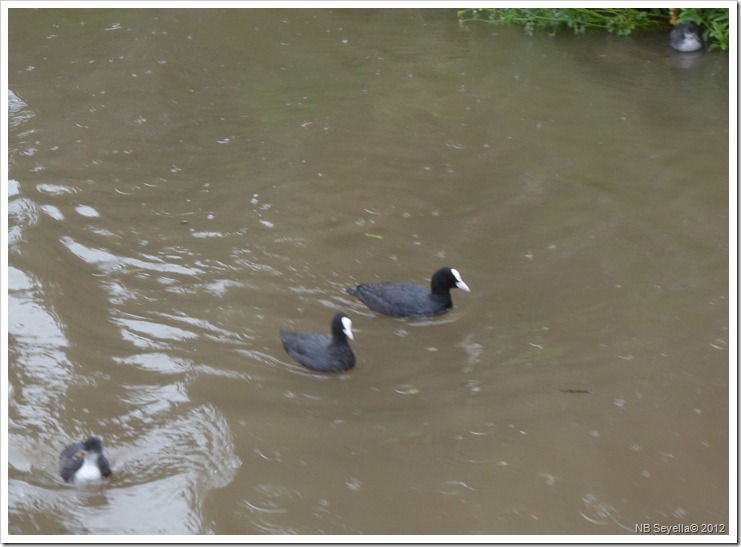 Sorry, hastily taken photo. There’s another chick in the weeds top right which I hadn’t spotted till now…

And so to Hawkesbury Junction. We pulled past the turn onto the Oxford Canal, filled and emptied the appropriate receptacles, then reversed to turn under the fine cast iron bridge and through the stop lock onto the Oxford.

Junction Bridge, with The Greyhound beyond 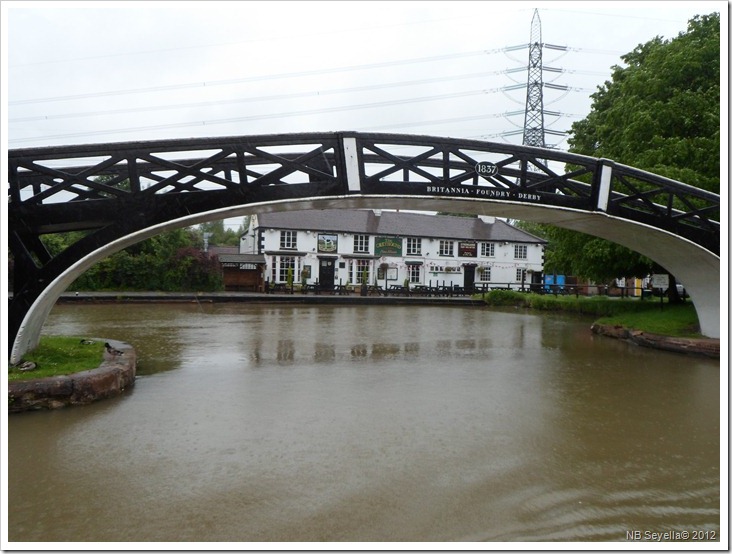 Stop Lock, Toll Office, Keepers Cottage and beyond the chimney and engine house for the steam pump which raised water for the canal from an underground stream. 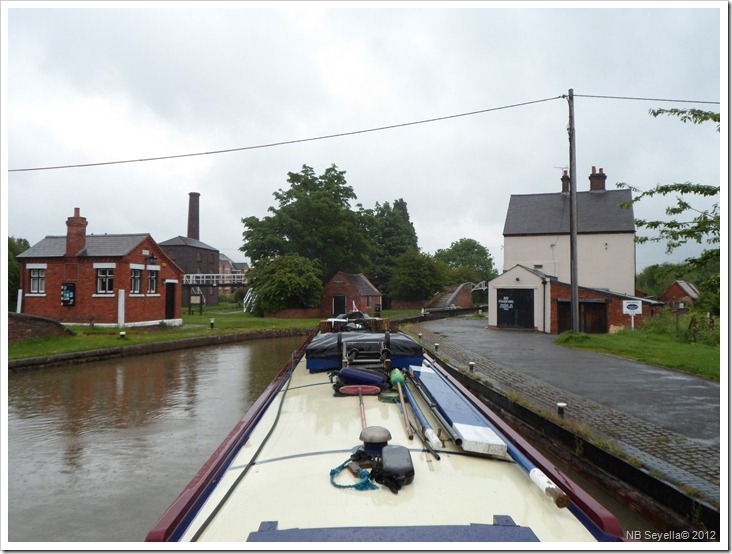 Hawkesbury or Longford Power Station has long been demolished, but the distribution network remains.

Transformers, distribution  and switching gear for the National Grid 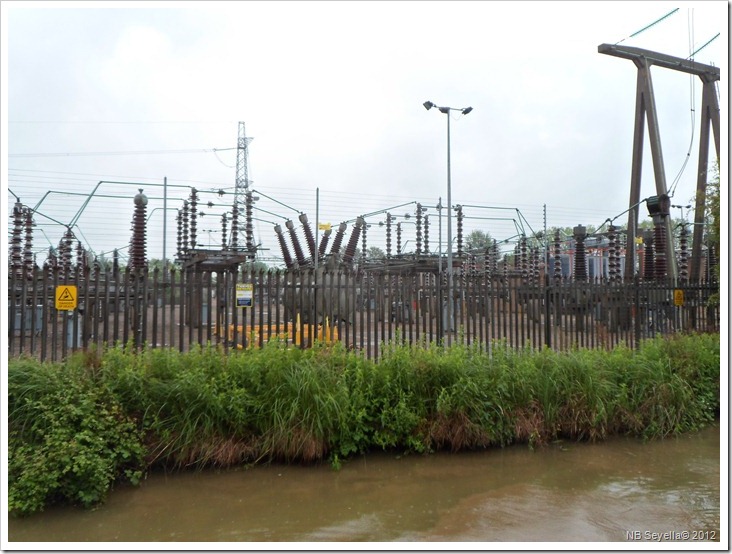 Happily fizzing away in the rain.

The power station site was once a colliery, then the power station and finally a tip. It was offered to the Coventry City Council for just £1 in 2003 for conversion to parkland, but the costs of landscaping, decontamination and ongoing maintenance were considered too high and the offer was rejected. It's still a wasteland of rubble and brambles.

The Wyken Colliery site is now a nature reserve the other side of the M6, the arm leading to the wharves is now used by the Coventry Cruising Club. 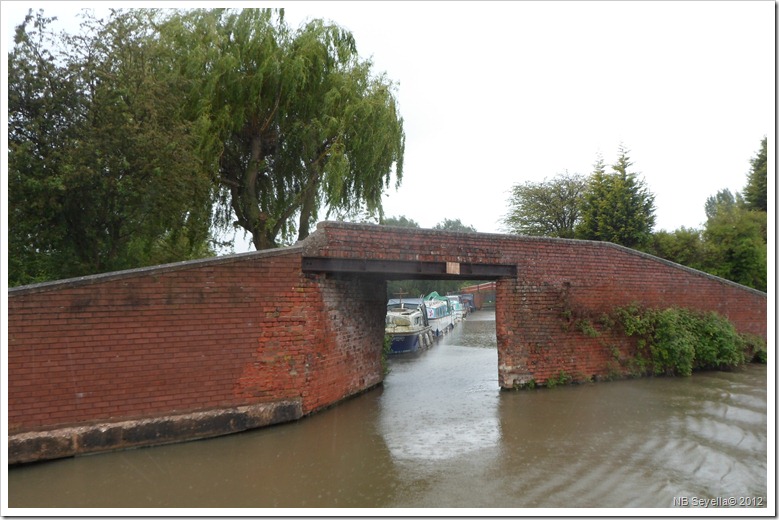 The canal runs alongside the motorway for a while (shouldn’t that be the other way round?) and we were going faster than the traffic at one point! It then heads off north-east (the canal, that is) ducks under the M69 near Ansty, and is then joined by the railway instead.

Railway arches and rhubarb alongside the canal near Hopsford 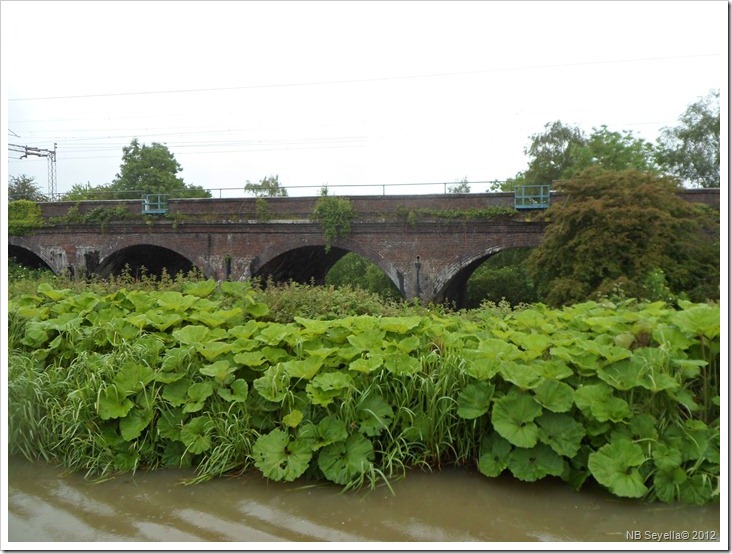 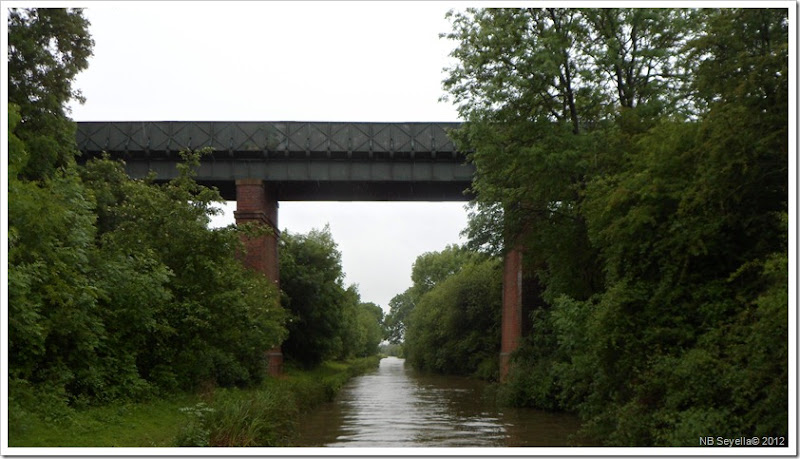 Now heading generally south-east, the canal passes through Stretton Stop, home to Rose Narrowboats. There’s a little swing bridge here, and then the short arm leading to Stretton Wharf and Brinklow Boat Services. This company specialises is restoration of old working boats. Sorry, no photos. It was raining quite hard as we came through and my last camera died through getting damp…

Approaching All Oaks Wood we were a bit worried that there might not be a space for us, but we managed to squeeze in. It’s a popular spot to moor. 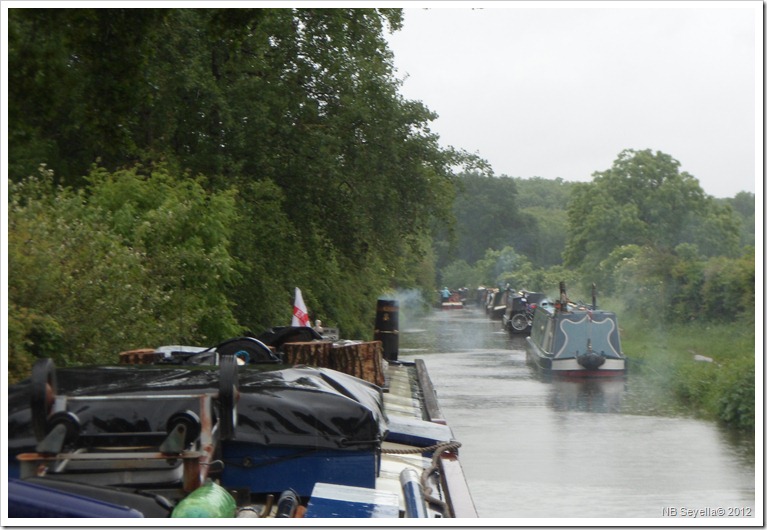 Yes, it’s still chucking it down, and yes, we’ve a fire lit again!

Tomorrow looks to be a bit drier, we’re moving on to do a bit of shopping at Brownsover, then heading down towards Braunston.

You look as though you are on a mission!