So good to be moving again!

We finally left Ellesmere yesterday, after several weeks of hanging around the local area.

Val and Johnny came over for a last visit early afternoon, then, as the temperature started to cool a little, we turned around at the bottom of the arm. Hopefully for the last time for a while! 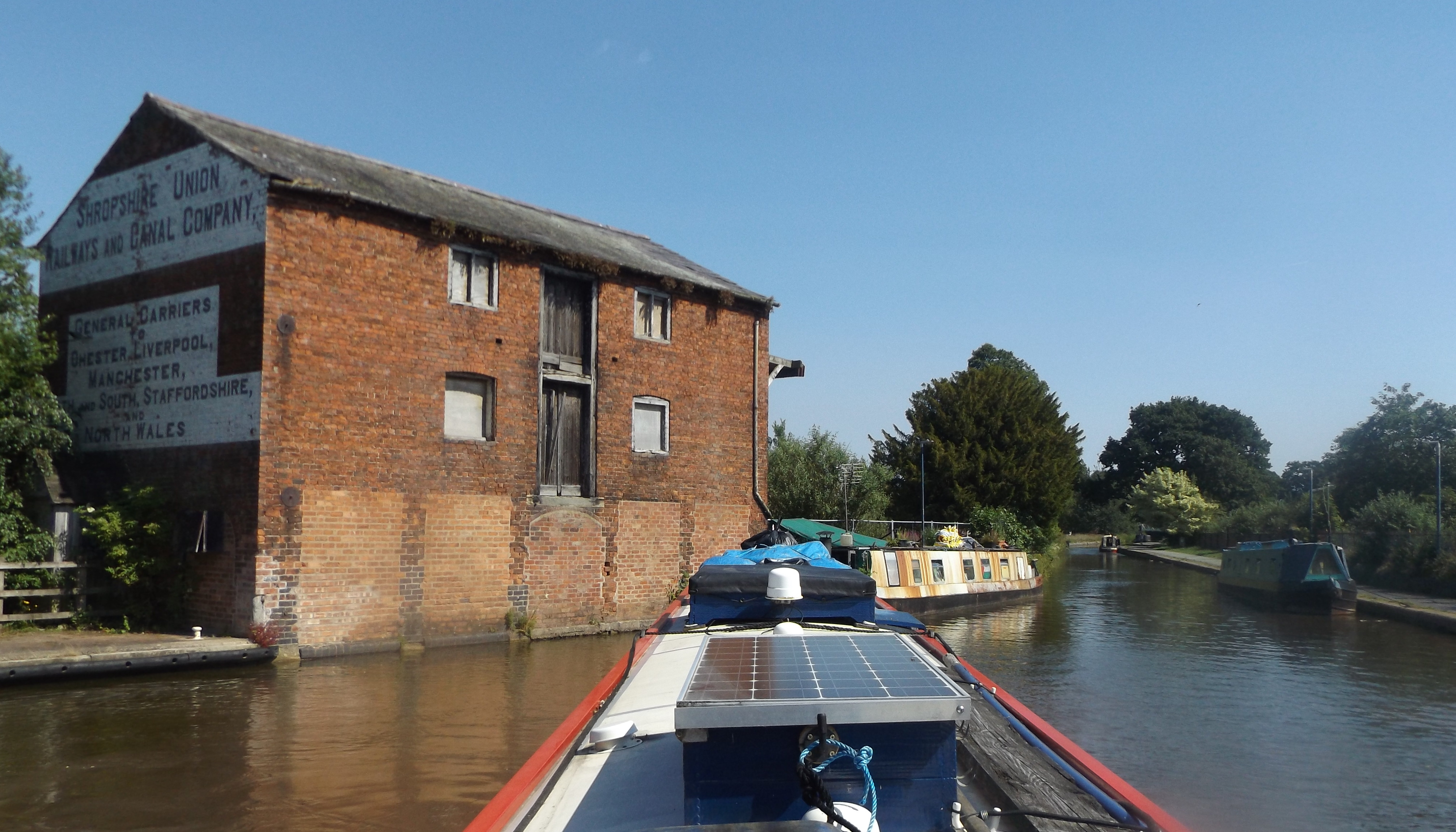 A visit to the wharf saw the water tank filled and rubbish and recycling disposed of, then we set off downstream, to Whitchurch and beyond.

The cool atmosphere of Ellesmere Tunnel was a welcome relief… 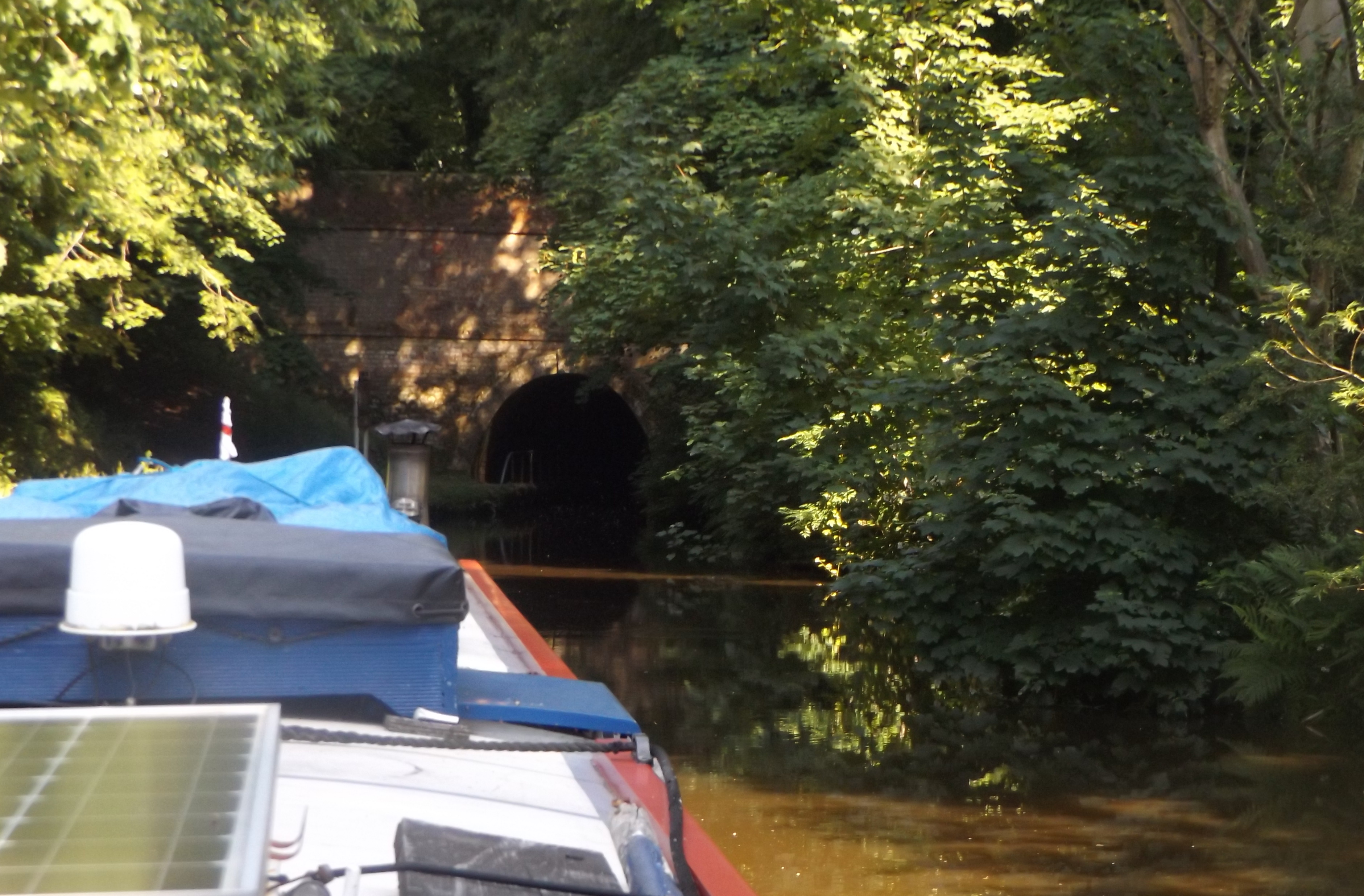 …as was the sun-dappled shade beneath the trees alongside the meres. 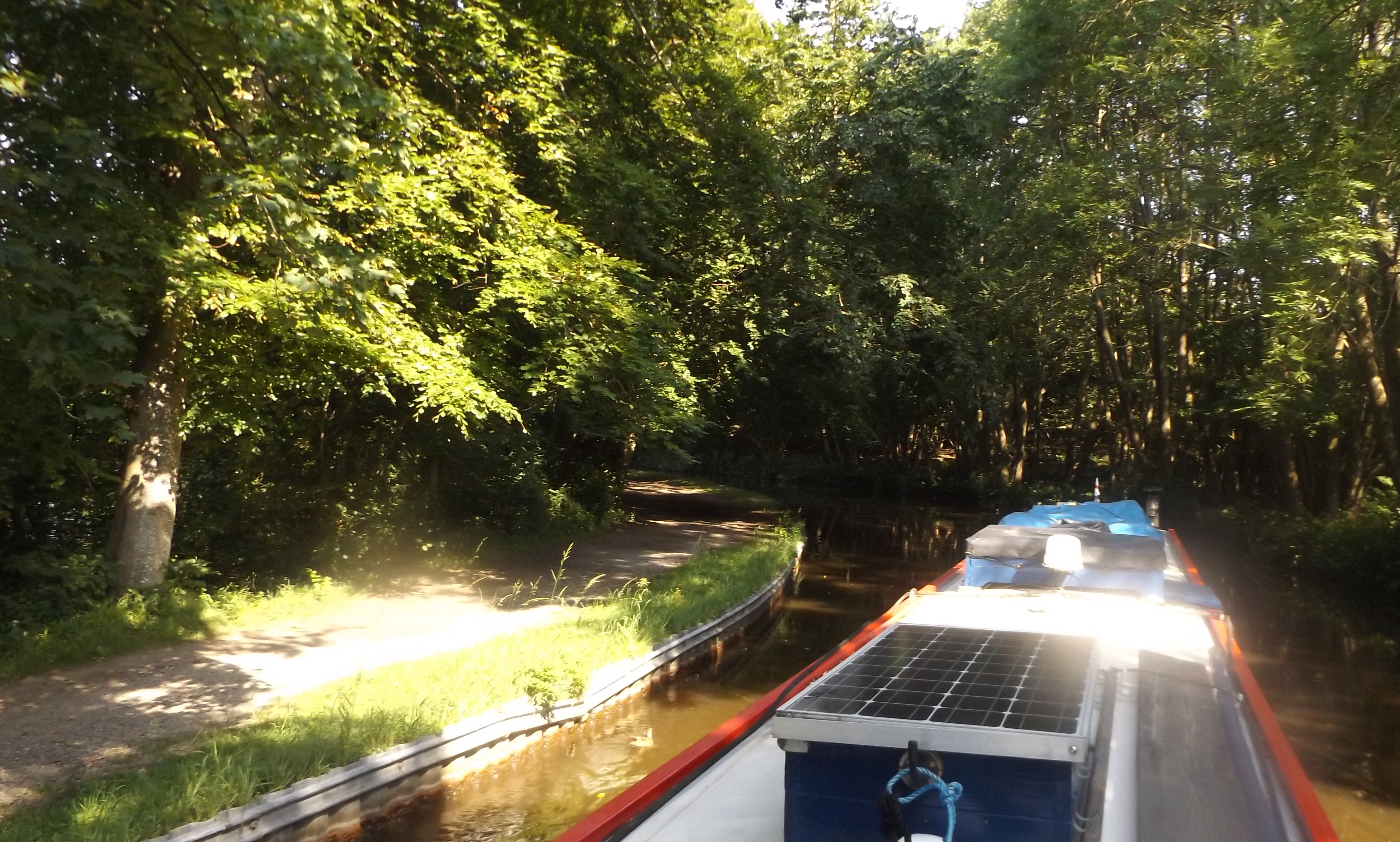 We toddled on for another half-hour or so, passing Lyneal Wharf and pulled in  near Hampton Bank. 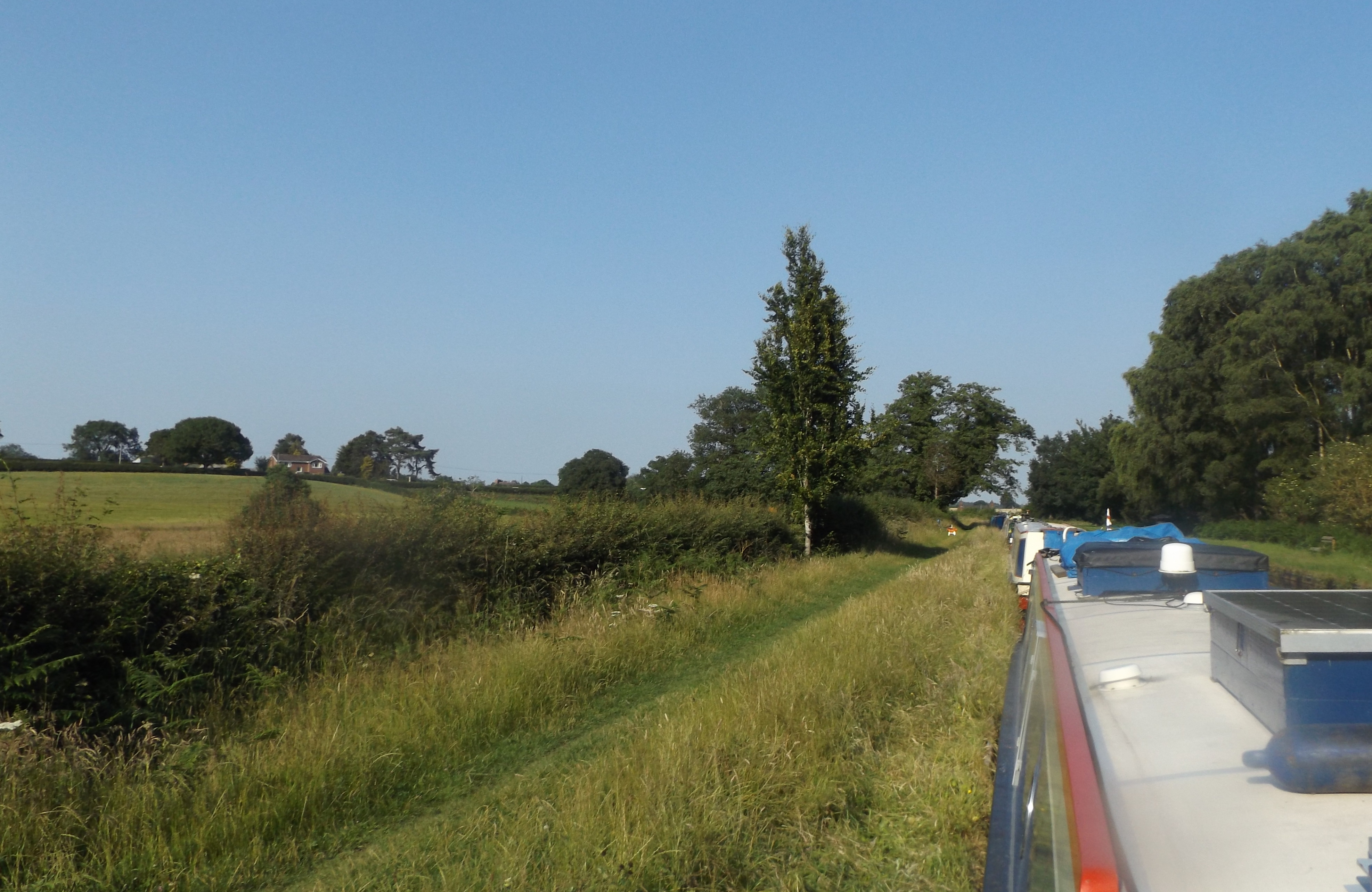 This morning Amber and I had an early walk, then we were off again at 9 o’clock, aiming for a short trip and to tie up again before it got too hot.

The wharf next to Hampton Bank Bridge must have been of some importance at one time, judging by the size of the house on the offside of the canal… 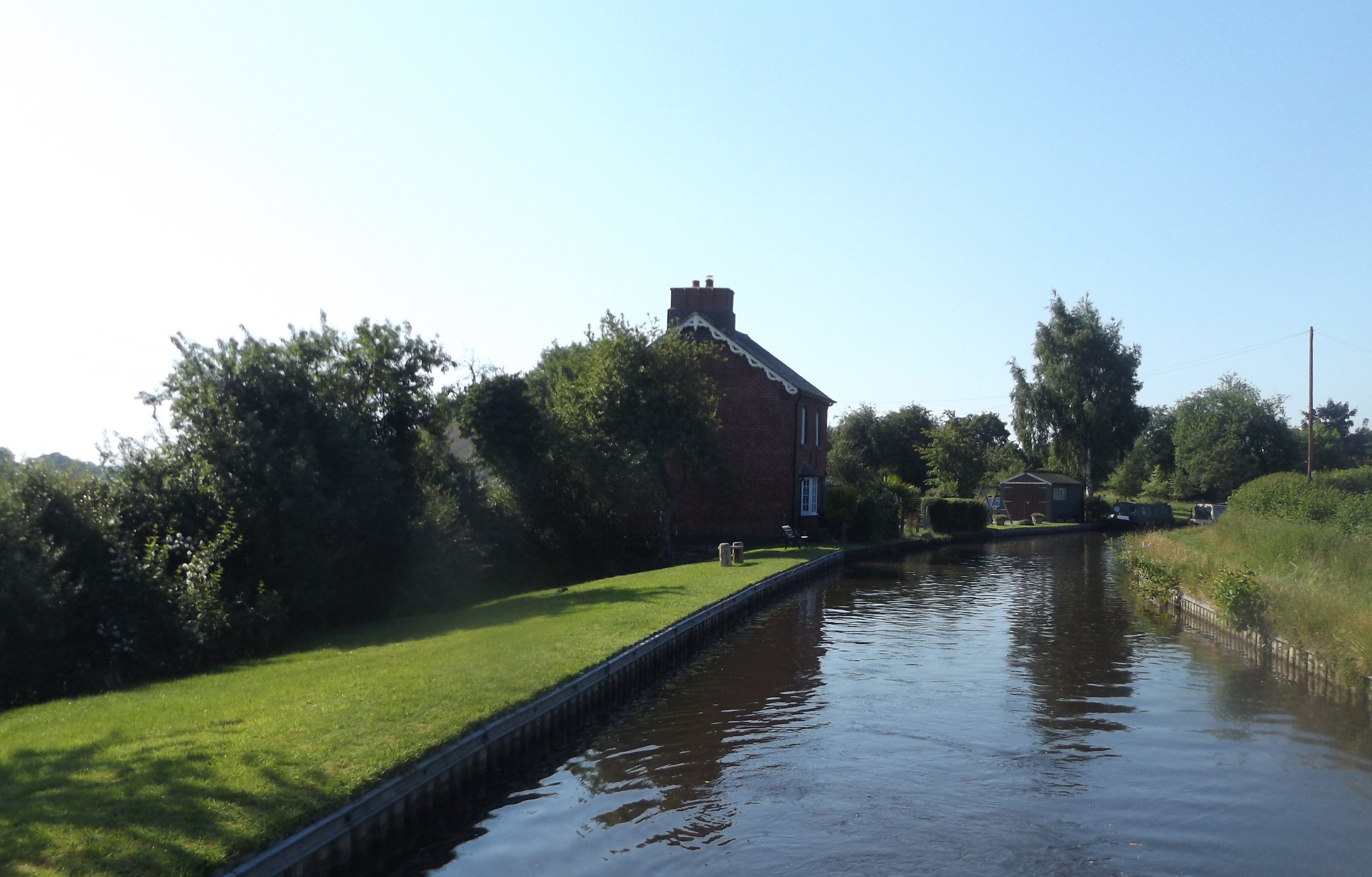 The canal sweeps across the embankment at Hampton Bank then loops around, past Bettisfield and onto the long straight past the flat, peaty expanse of Bettisfield Moss. 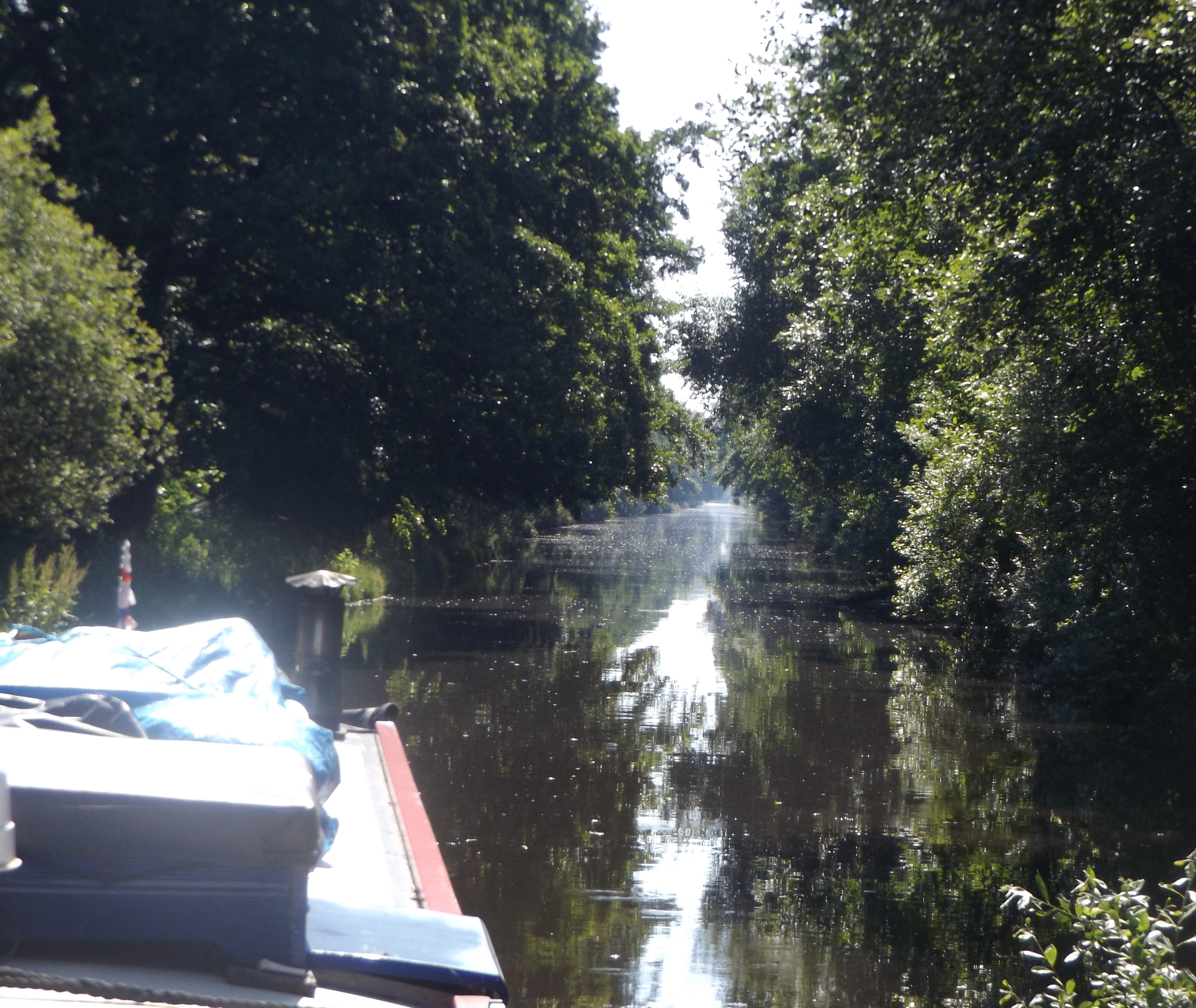 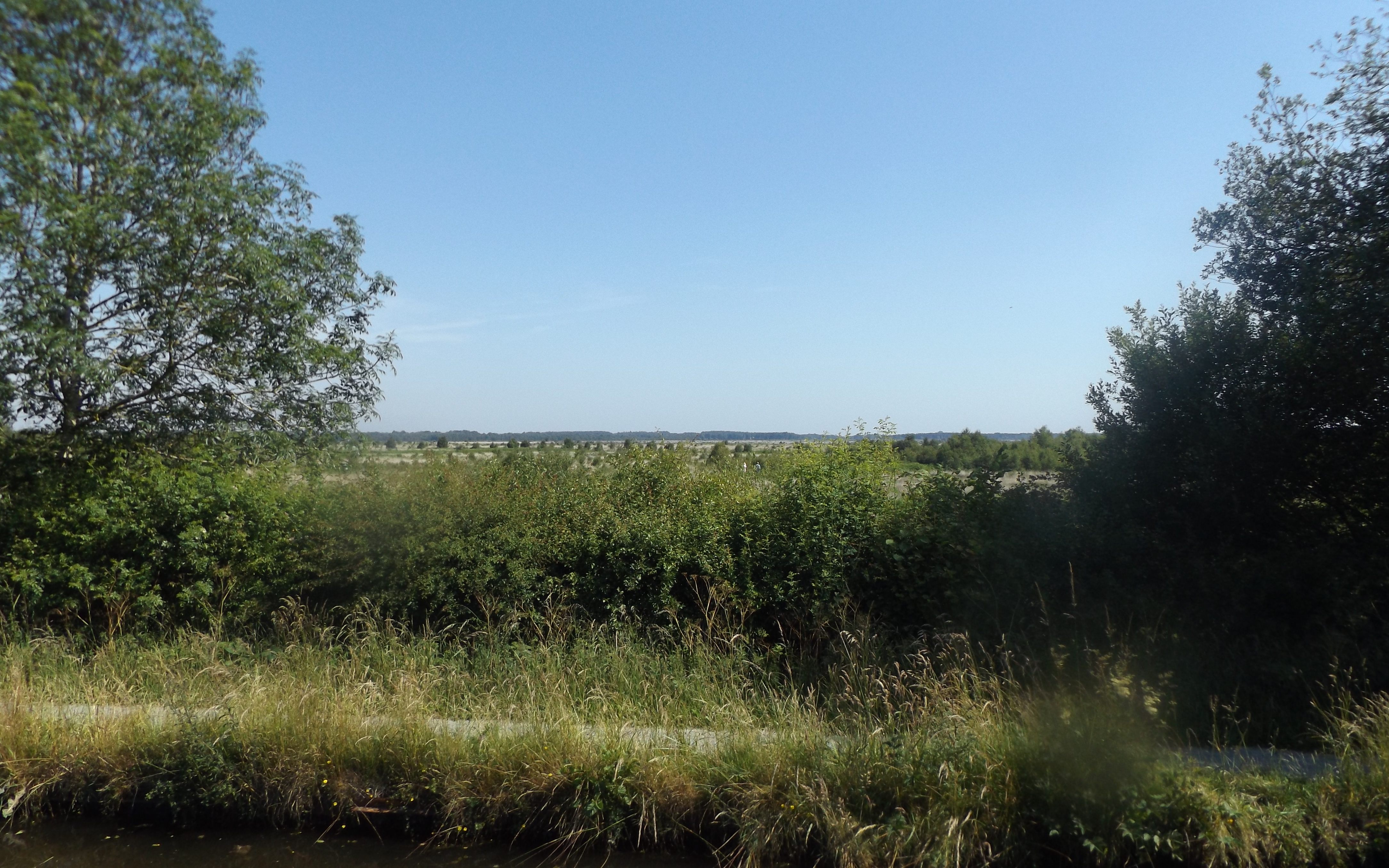 At the end of the straight the Prees Branch heads off to the right, south-east, with a large house overlooking the junction. 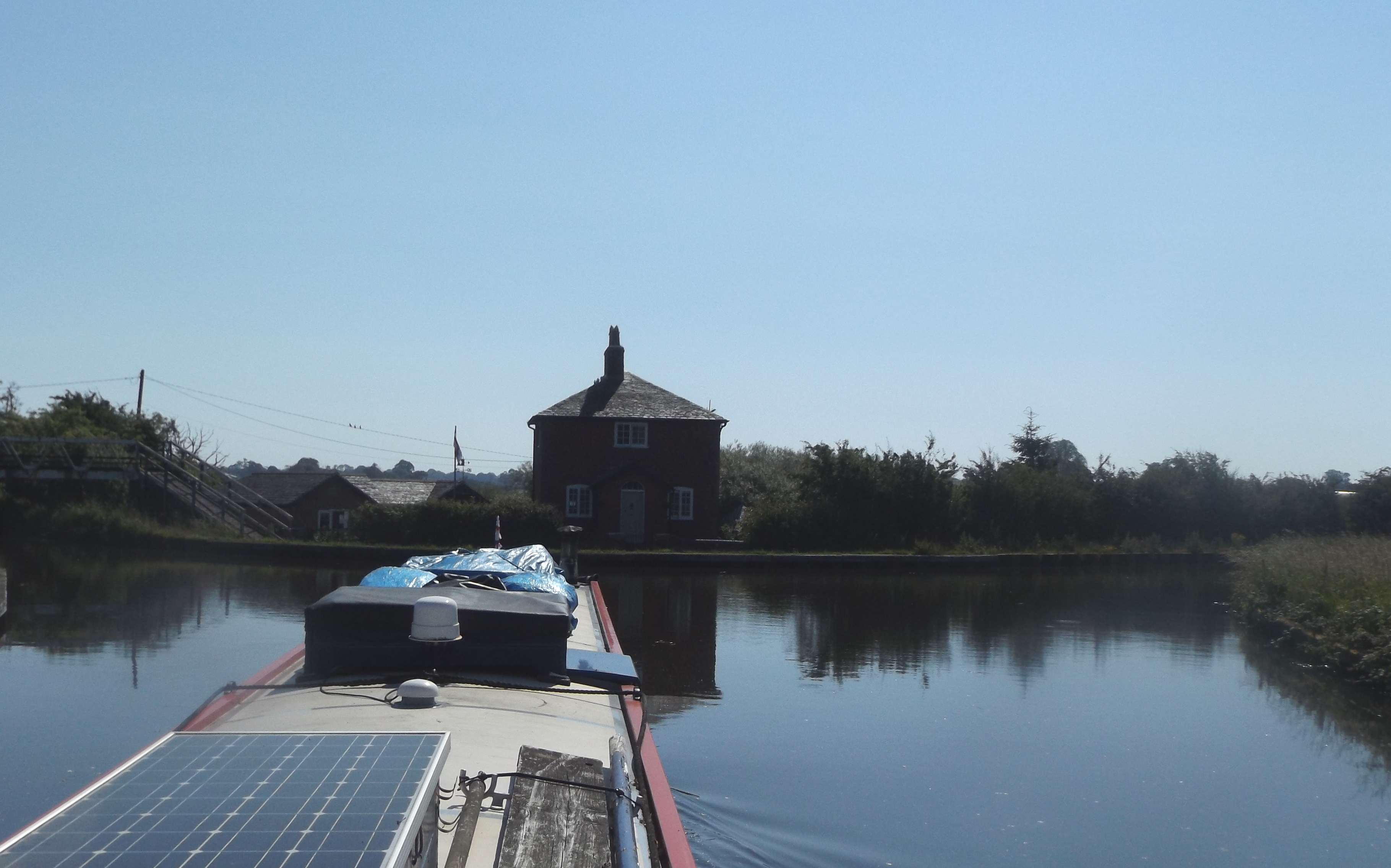 As is common with a lot of the projects started at the tail end of the canal era, the branch didn’t actually get all the way to Prees, running out of steam (and money) at Quina Brook, several miles short of it’s planned destination.Now only the first mile or so is navigable down to Whixall Marina. The remaining 2¾ miles is mainly a series of shallow weed-choked ponds, a lot of it a designated nature reserve.

We negotiated Morris Lift Bridge, still requiring 80 turns of the hydraulic pump to lift the road bed and the first time I‘ve used a windlass for several weeks and then moored just the other side of Roundthorn Bridge. I expect we’ll wait out tomorrow’s stormy weather here. But the internet is so poor we may brave the weather and move on a little.

Amber is getting more used to cruising now, she’s comfortable enough that she is prepared to crash out on the back deck. 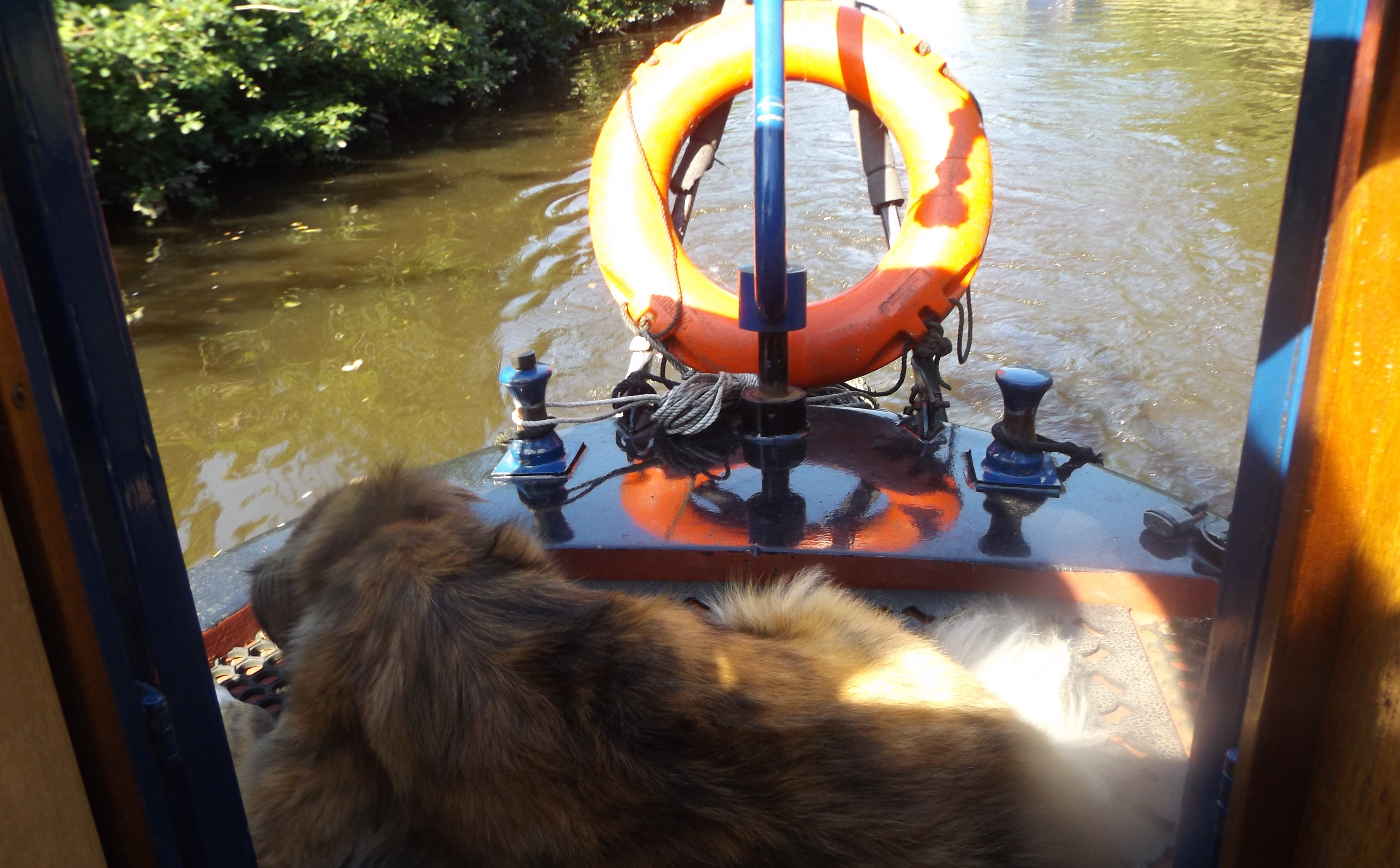 But she does prefer a little “me time” when we stop… 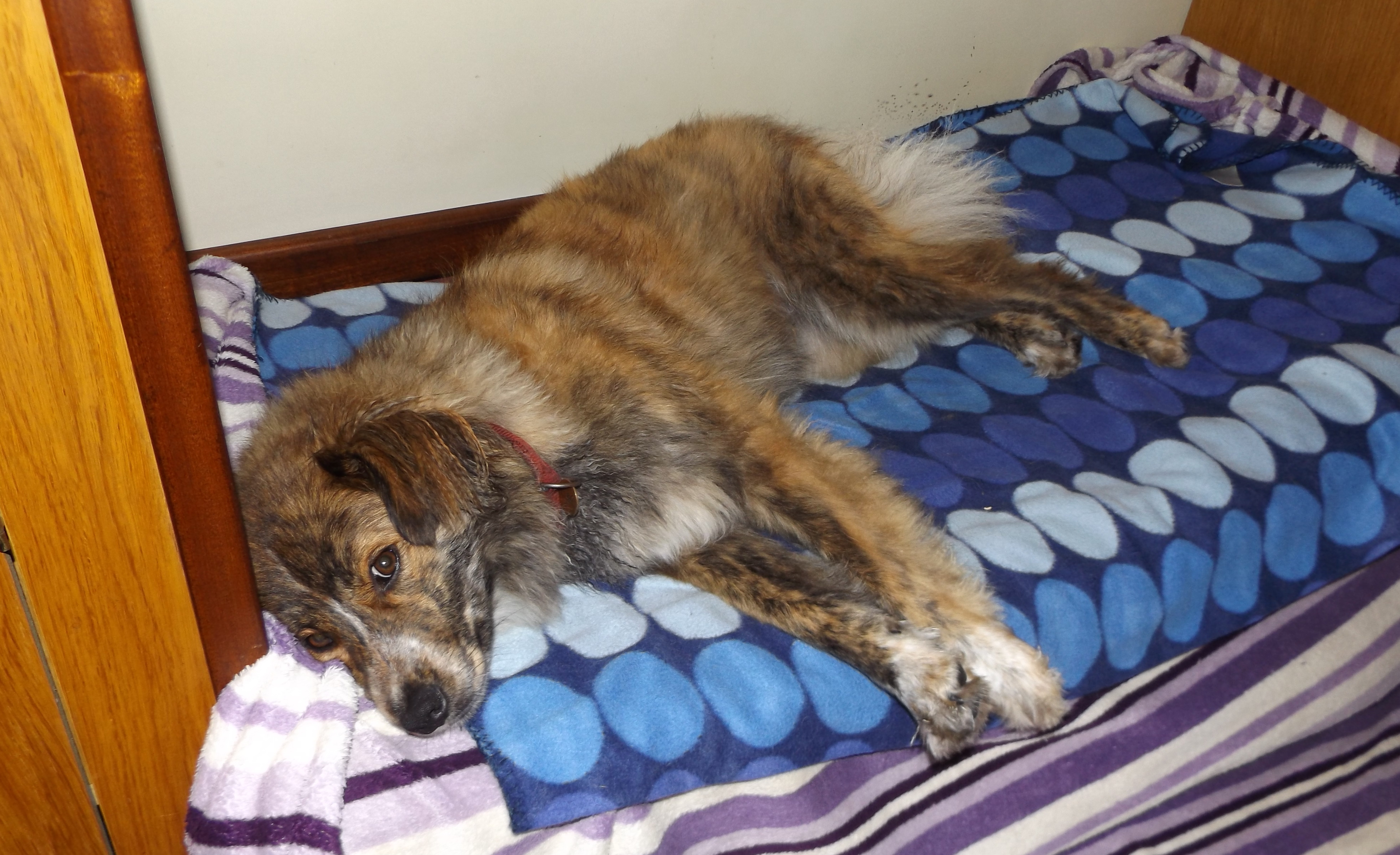 Well, we’re still here, in and around Ellesmere. There are a few more boats coming and going, but the canal is still very quiet.

Just two or three boats on the Ellesmere Arm at the weekend. 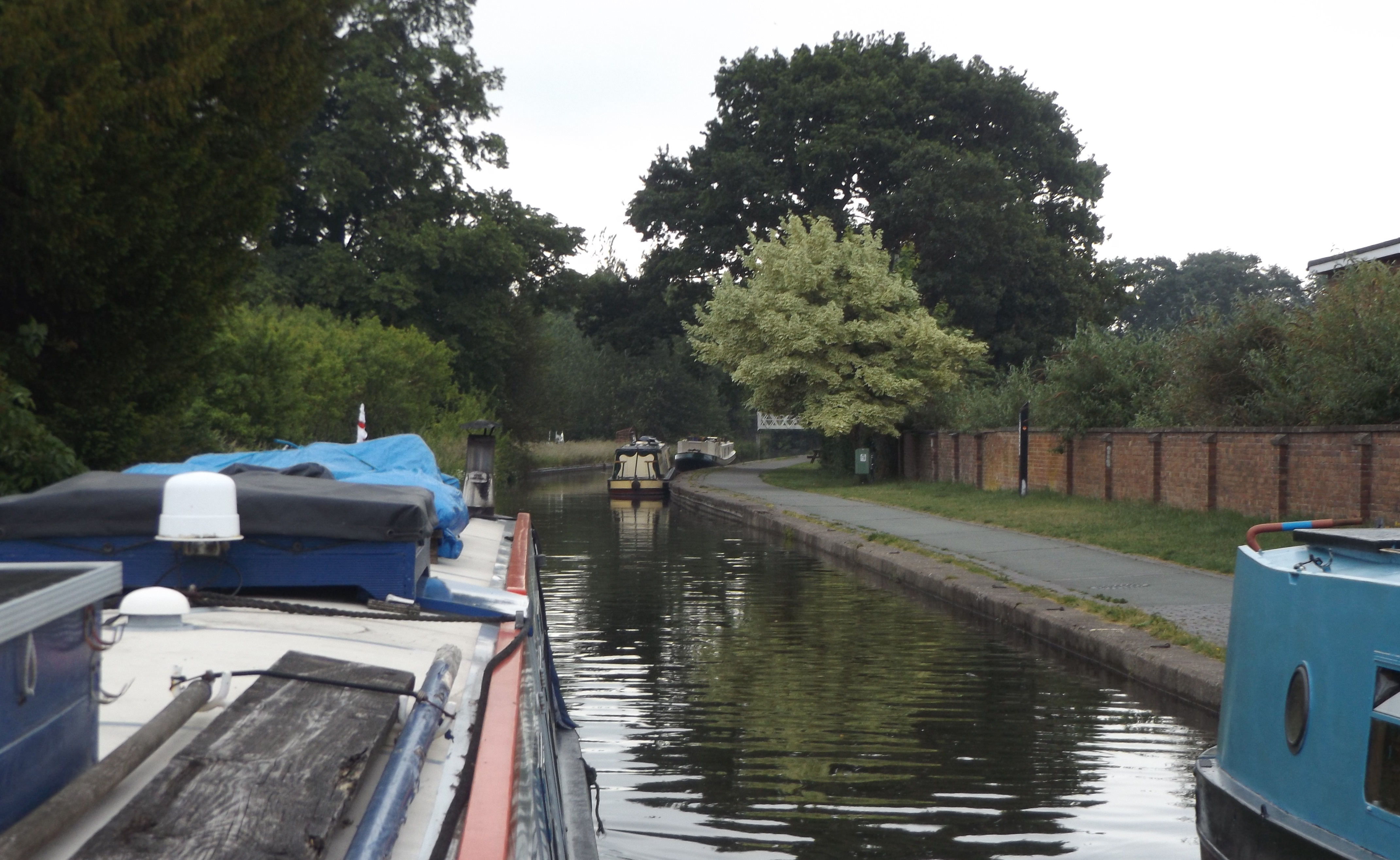 Did I mention that we had a new Shoreline fridge delivered last Friday week? The old one went out through the side hatch, and the new one came in the same way. I started it up and left it for a couple of hours to settle then set it the same as the old one and loaded it up. The following day I discovered that it is far more efficient than the old one… 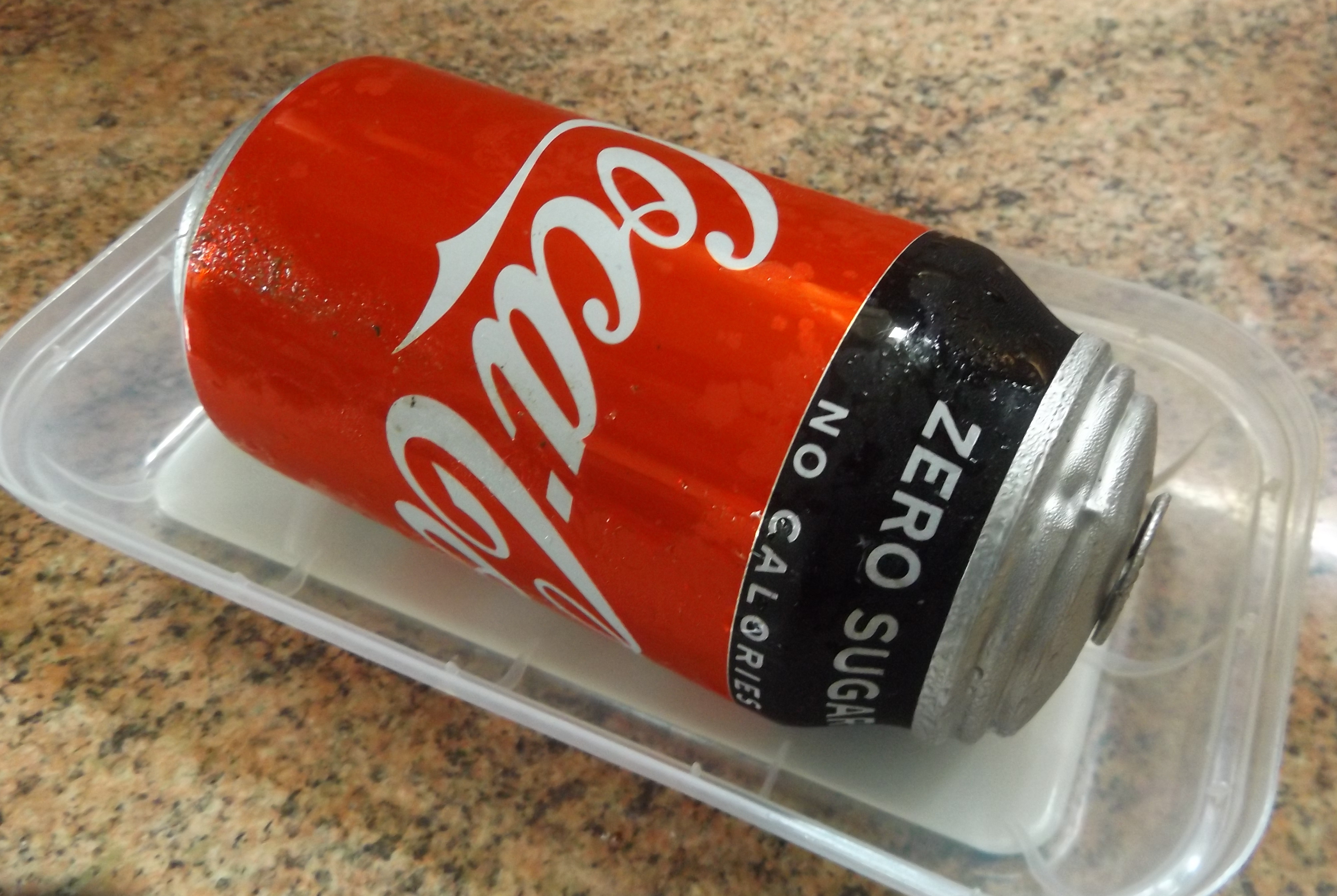 To get rid of the old one I hired a car from Enterprise on Monday, no dearer than finding a man and van I thought, loaded it up and took it to the tip at Oswestry. Then in the afternoon we snuck across the border and into Wales to visit Val and Johnny who are still isolating. Social distancing rules were rigorously observed, apart from by the dogs who got to know each quite well…

The car was collected on Tuesday morning, and the checks revealed a scratch along the offside wing extending onto the door panel which wasn’t there when I parked up Monday evening. Bugger. I do have insurance to cover damage to a hired vehicle, but I still have to pay up front before claiming it back. And I’ll lose the excess. So the cheap option  wasn’t so cheap after all. Turned out to be a very expensive fridge. Ah well.

Amber continues to settle in to boat life, she’s more confident on the counter when we move and likes to have a good sniff around when we moor in different places. 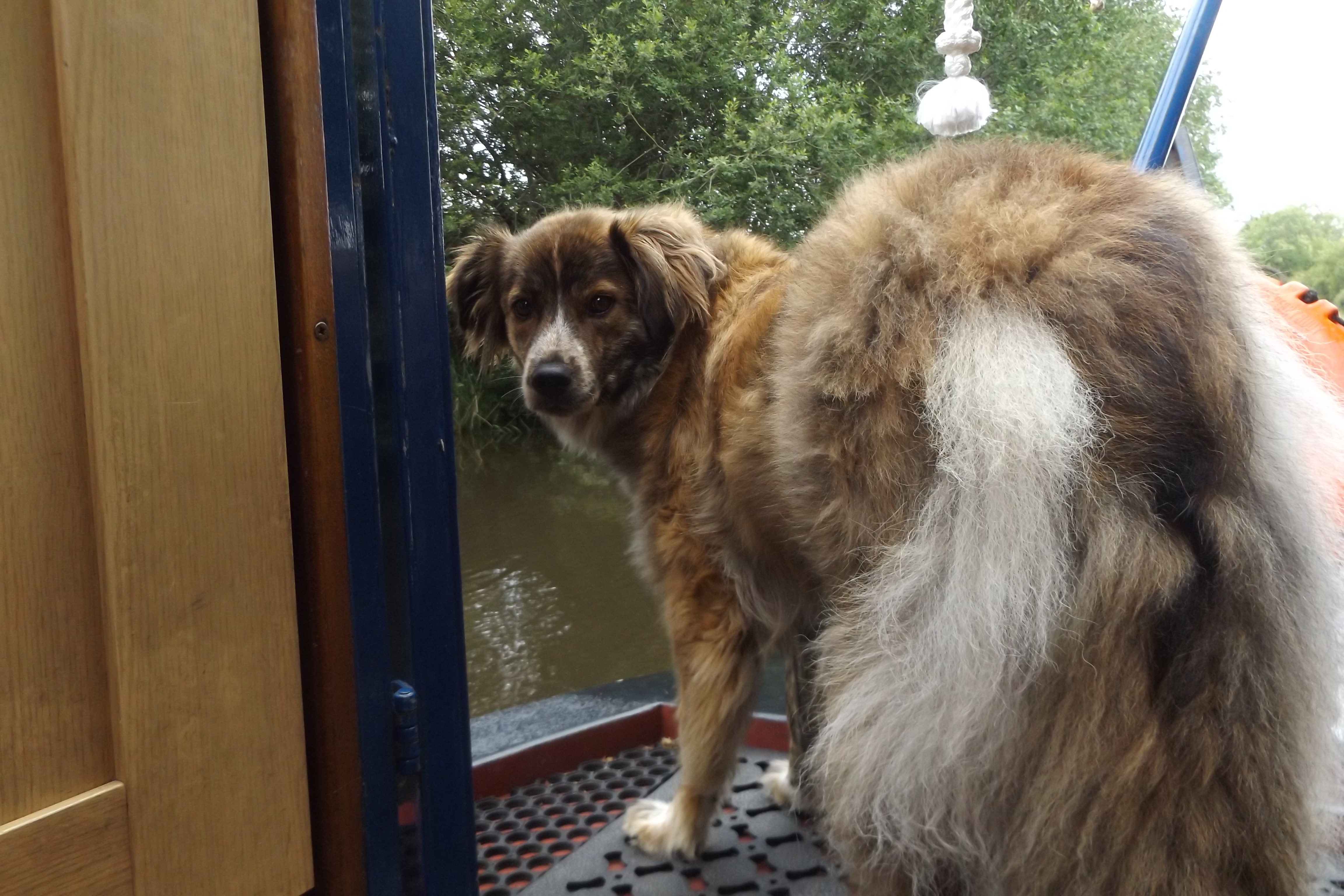 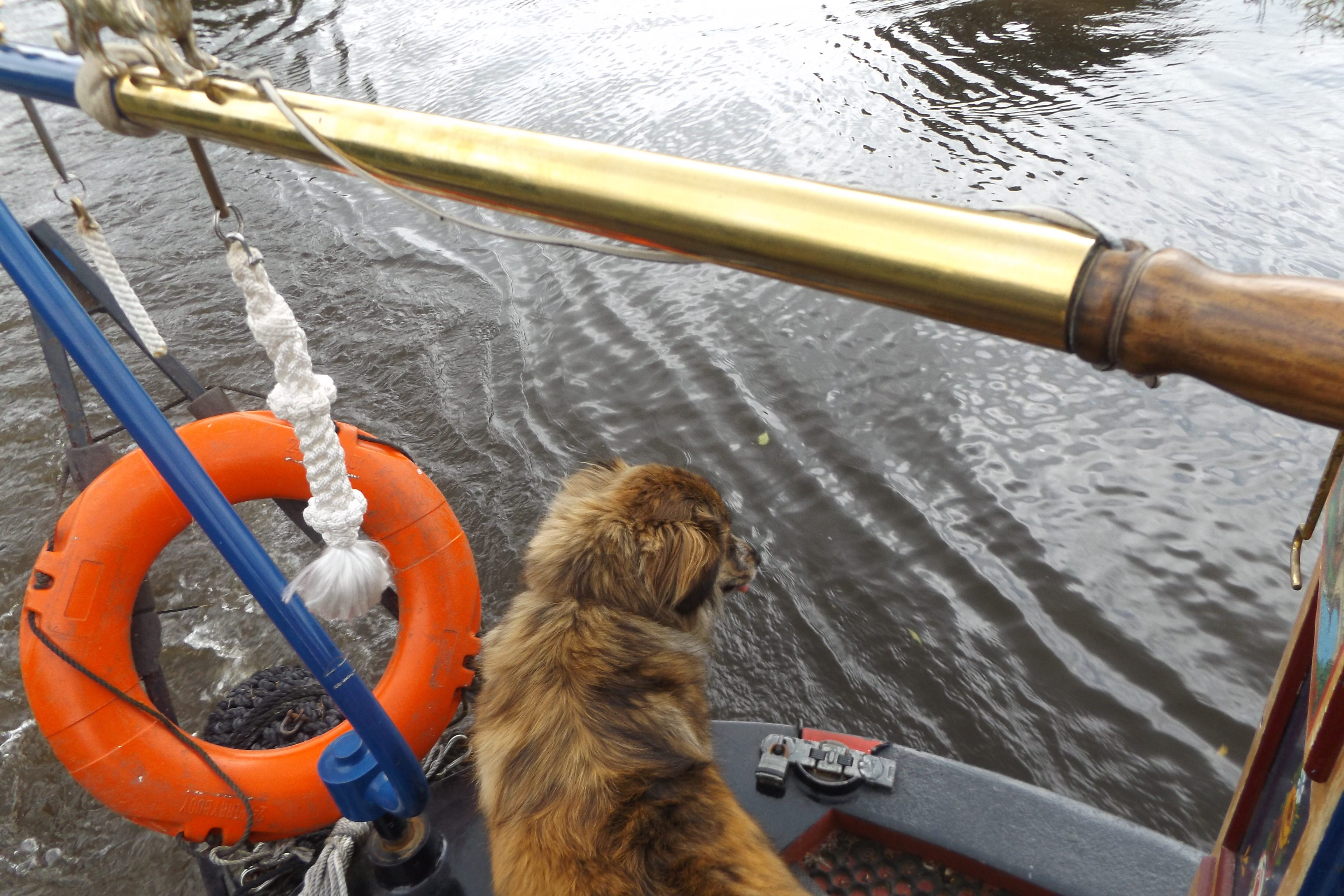 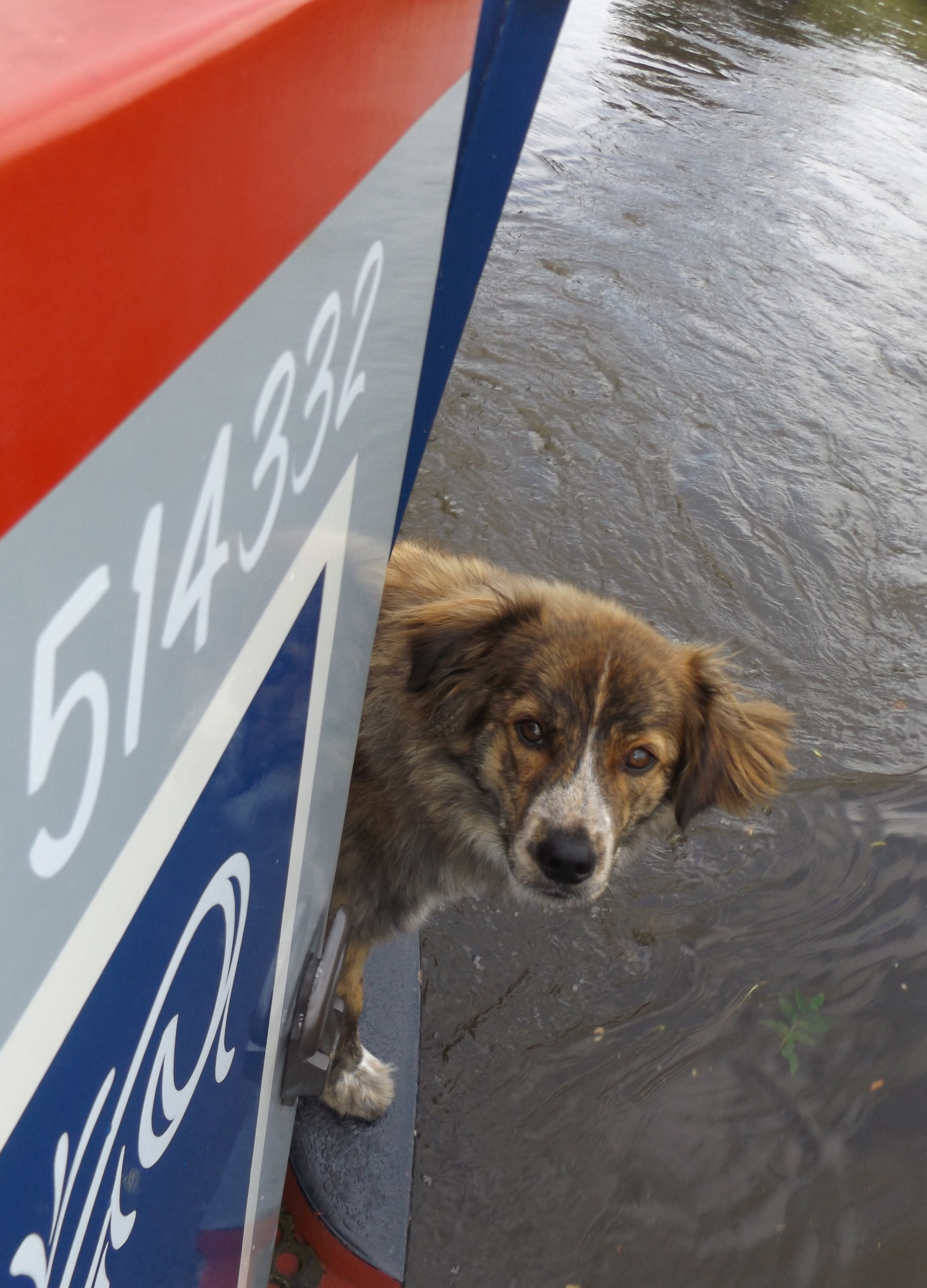 I’m happy to let her have a mooch about off lead as well, so long as there’s no distractions. Recall still needs some work but we’re getting there. 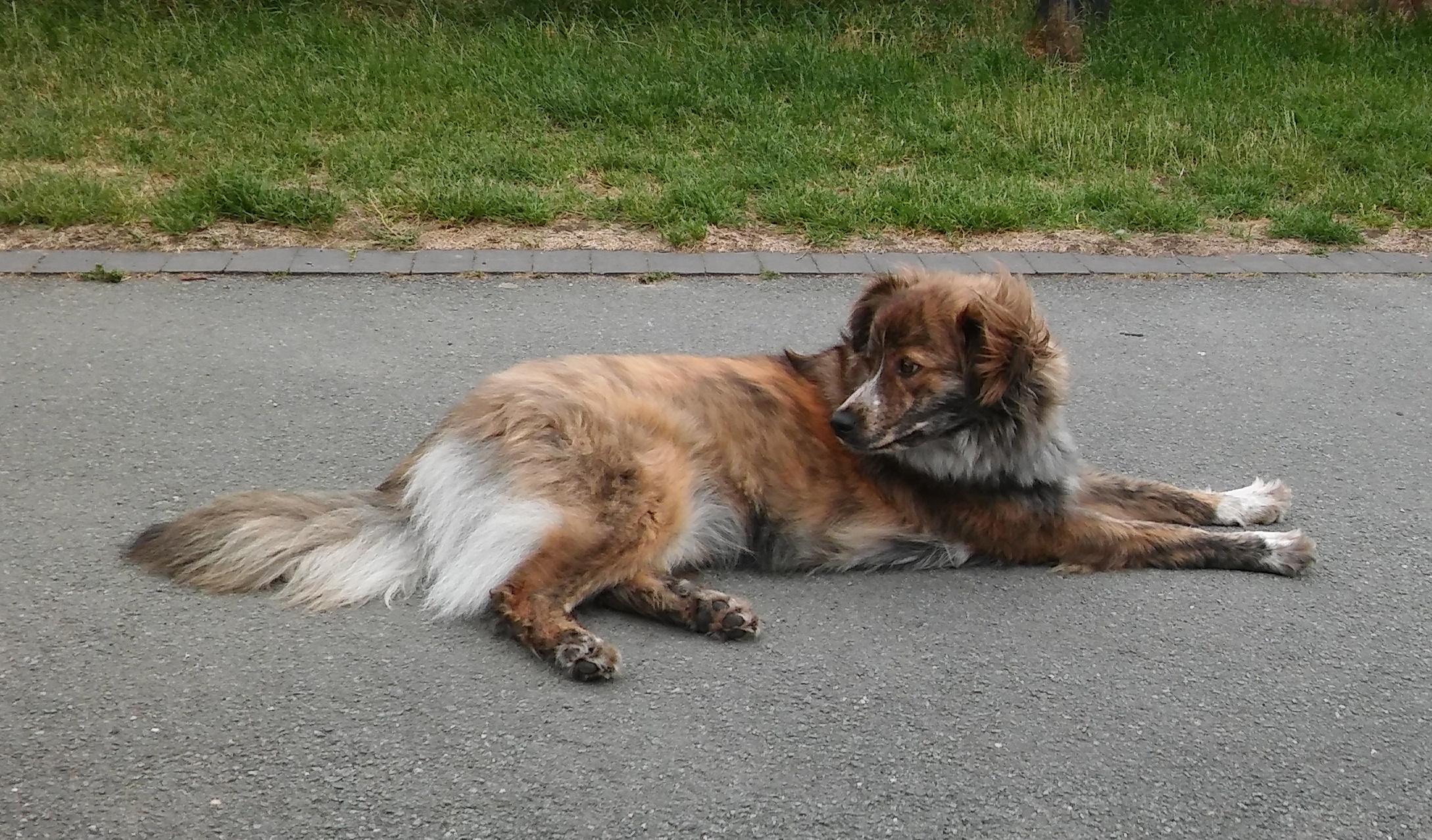 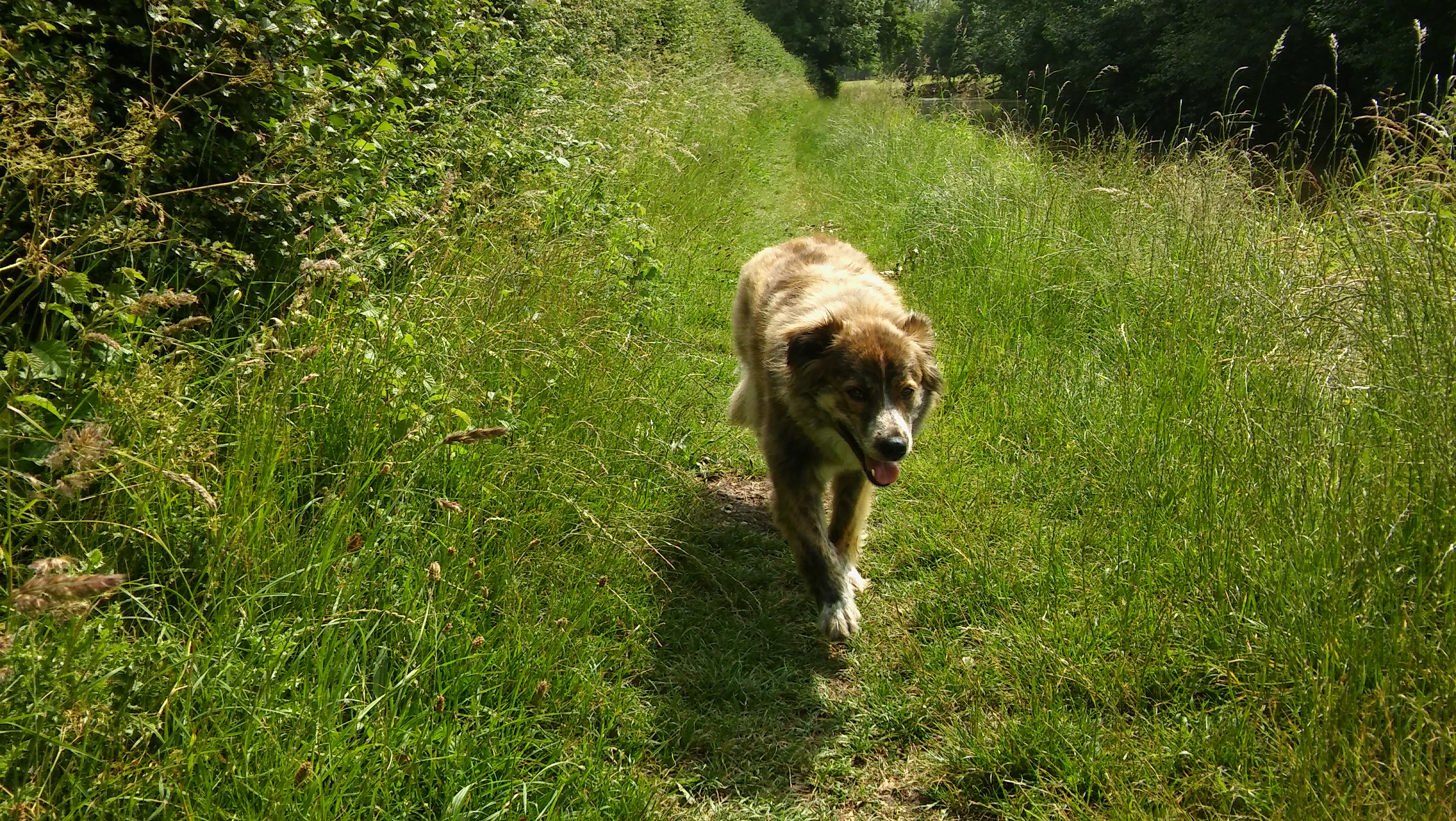 Something interesting down in the field… 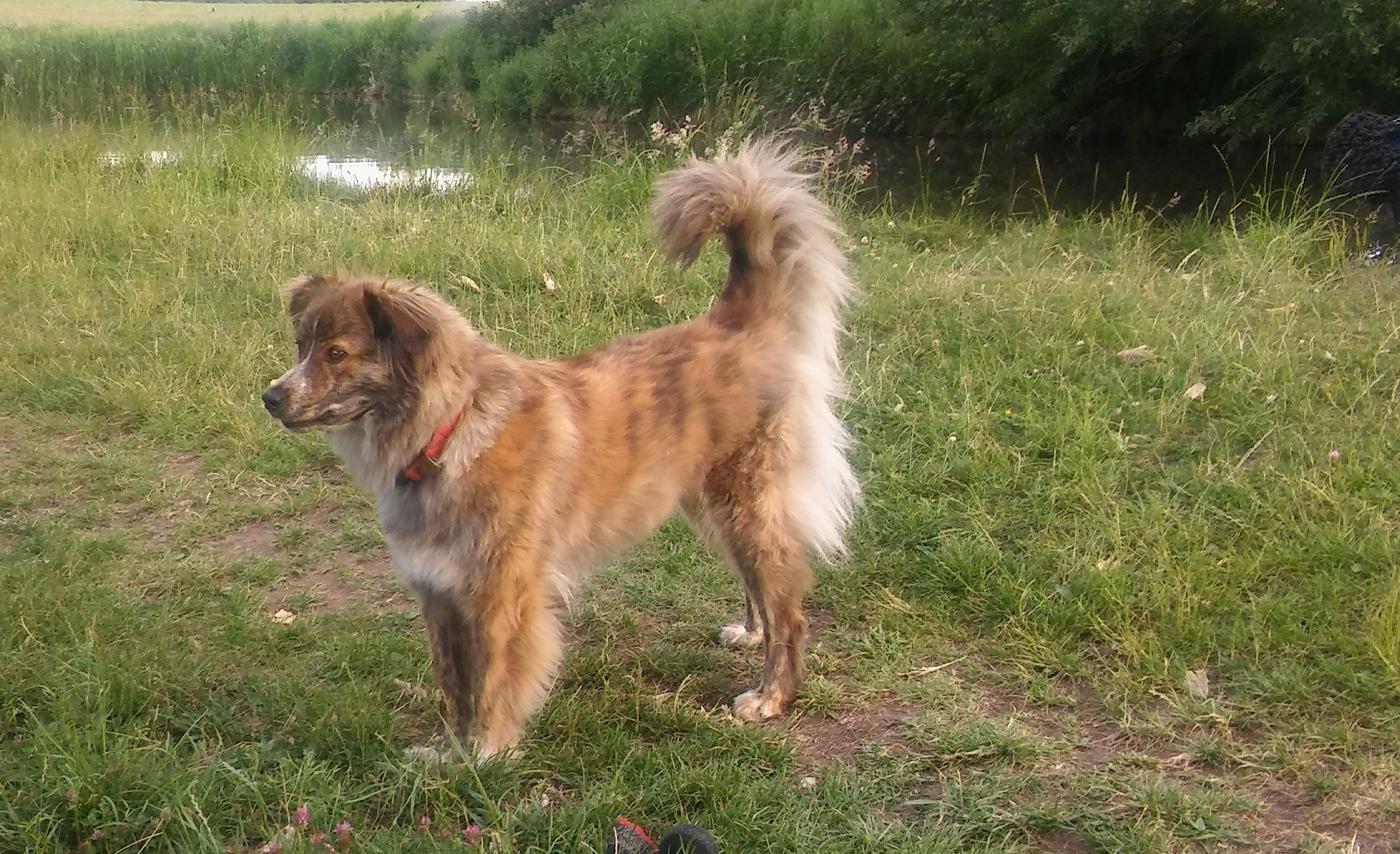 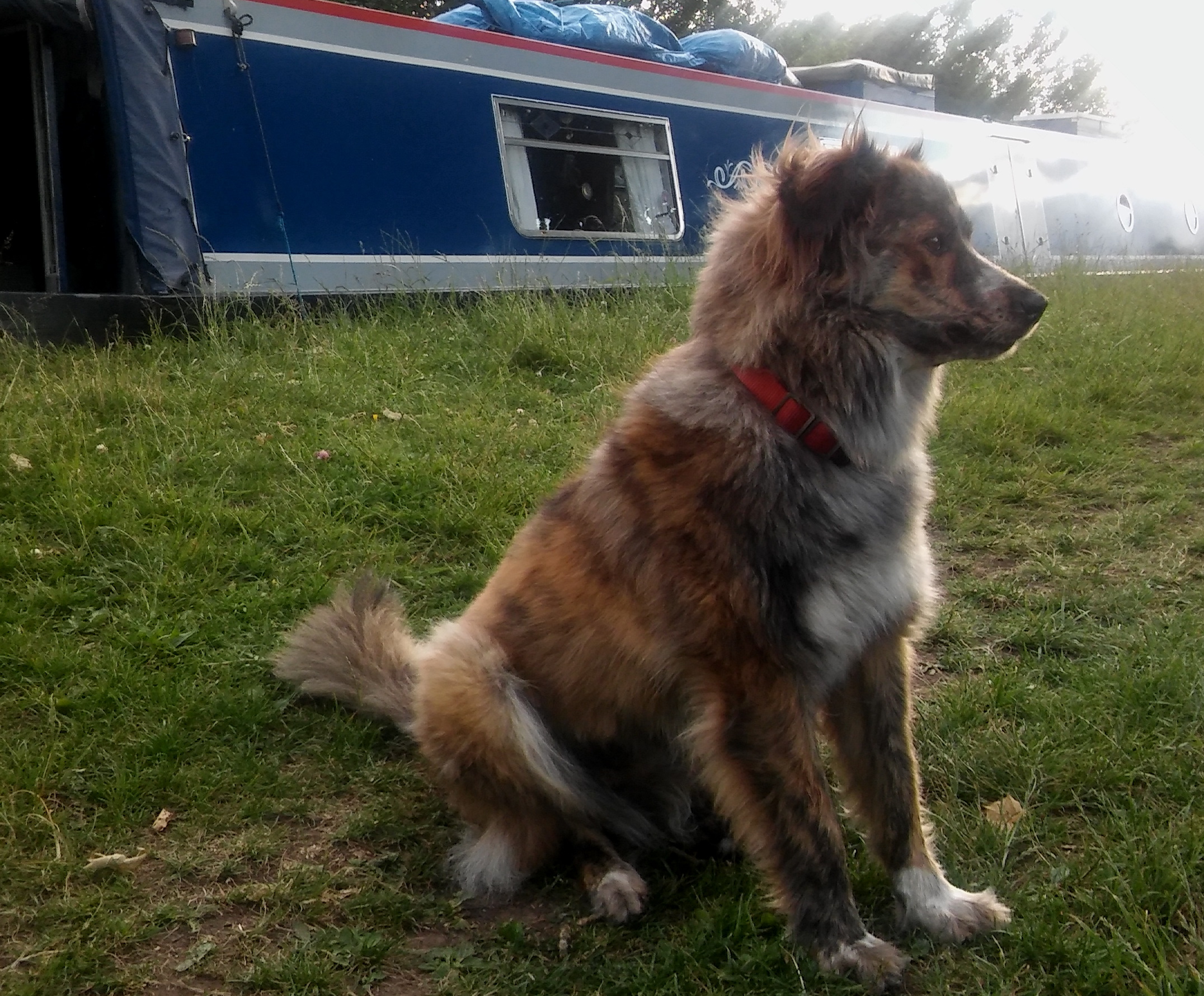 I bought her a Kong biscuit ball to complement the classic Kong she likes to have her lunch out of. Typical child, she was more interested in the packaging than the ball! 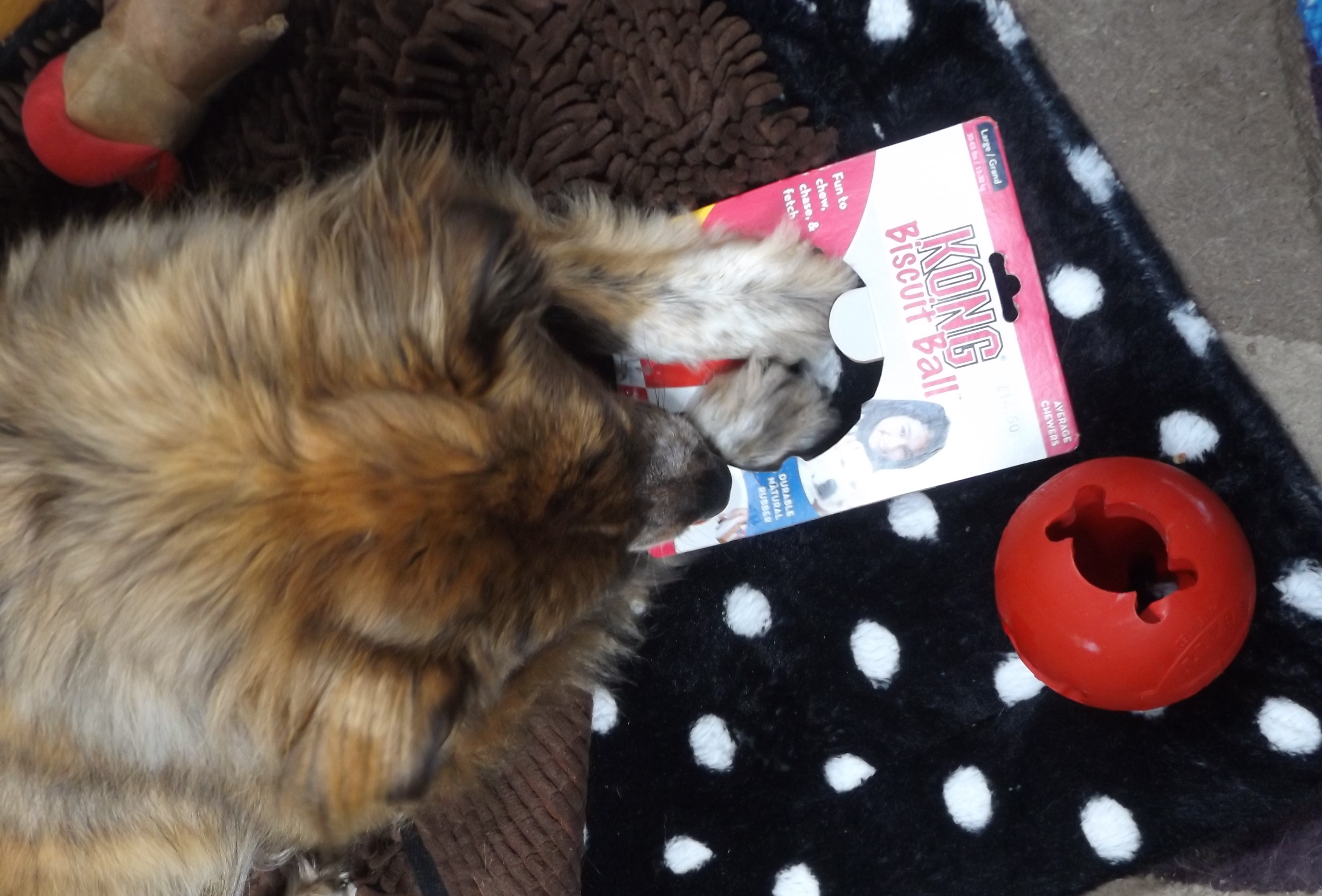 That’s about it. Another week hanging about, I’ve some ebay items coming to the garage next week, then we’ll be off, heading back to the Shroppie. One of the purchases is a Furminator, a grooming brush that is supposed to be extremely good at removing the dead hair from the fine undercoat beneath Amber’s outer, guard coat. The double coat is a legacy of her genetic link to Carpathian shepherd dogs which were bred to protect flocks on the mountains all year round.

And that’s about it. Thank you SheilaToo for your kind comments, I‘ve not posted them as there’s some personal information there you may not want sharing with all and sundry. Interesting though. Hope we get a chance to see you and KevinToo later in the year. Keep well.

There’s not much cruising to report so I thought I’d just write about Amber’s progress. It’s been 10 days now since we collected her from the van which had bought her over 2000 miles from her rescue shelter in Romania, and she’s doing pretty well. Apart from paperback books having an uncontrollable fascination in the middle of the night… 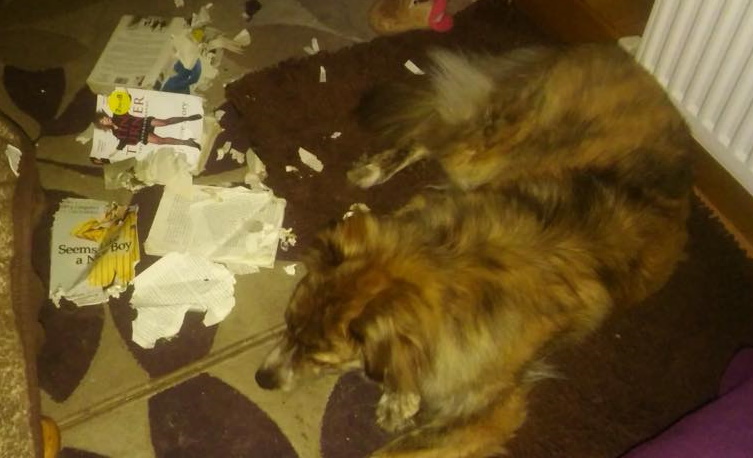 To be fair they are the only things she’s taken her boredom out on, and only at night. So barricades against the book-cases are the order of the day until she loses interest. She has her own toys and chews anyway, so any sign of interest in a book while we’re there gets intercepted and a nylon chew bone shoved under her nose.

She sleeps on a rug in the saloon, having shunned the £30 bed I bought her. Too well stuffed we think. I have a pad on order for her which she should find more comfortable. At first light, unfortunately at around 4 AM at the moment, she toddles through and stuffs her wet nose in my ear, but goes back and settles down for another hour or two before reminding me in the same abrupt manner that she needs a pee. 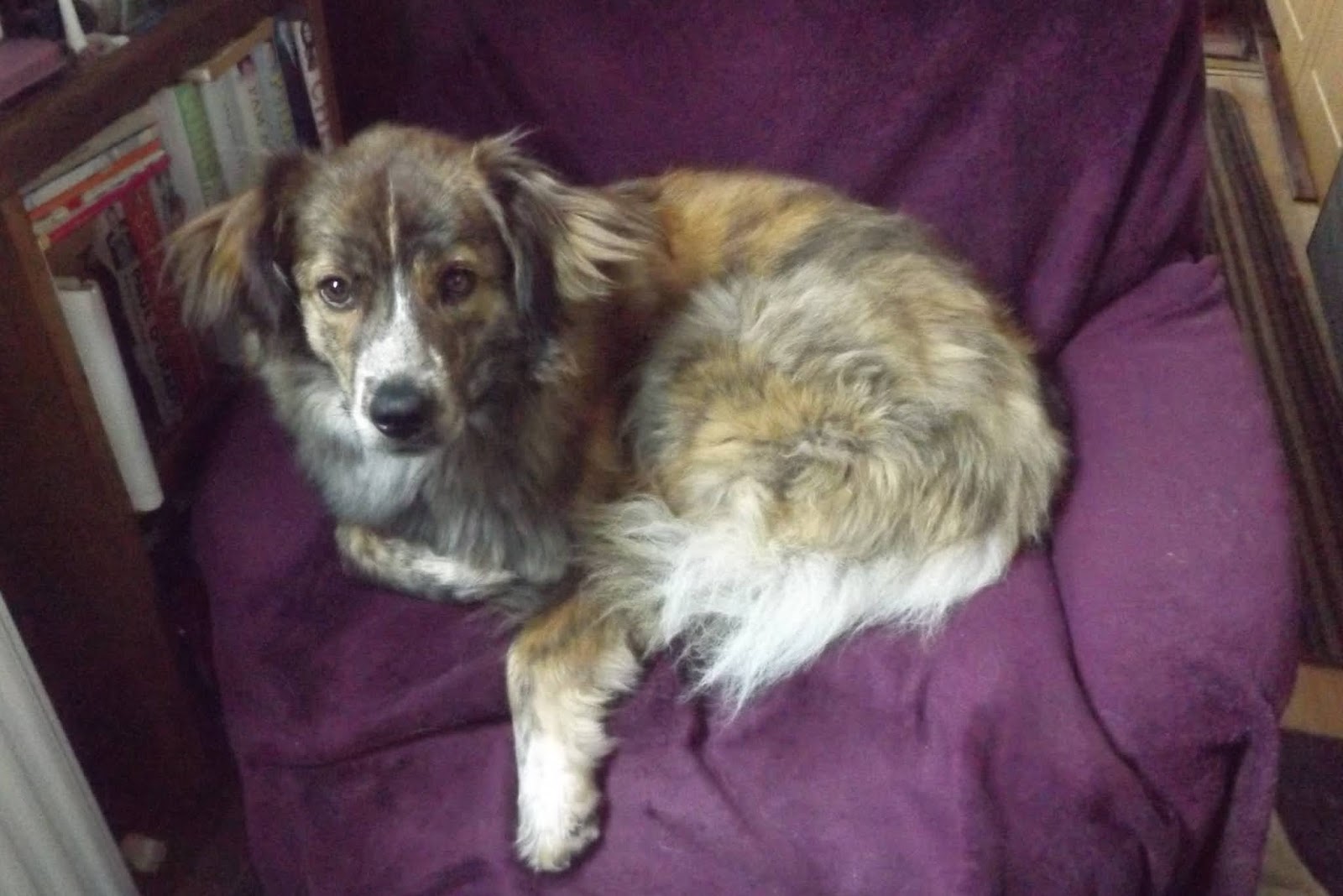 She lets us know when there are people passing, very vocally at first but that’s getting a bit better as she gets more settled. The other morning she woke us at 1:30, barking loudly. I found her stiff-legged in the middle of the saloon, glaring at the stove. The bright moonlight had allowed her to see her own reflection in the door glass and she was barking at the ghost dog. A sheet of black-painted cardboard sorted that out.

With the very hot weather I’ve made a half height barrier to fit across the front doors so she can’t molest passers by but can still see out. She’s happy to stand on the step and rest her paws on the top.

Outside she started out a bit of a hooligan, barking at approaching dogs and strangers. Focus and distraction training have improved her attitude to the extent that she completely ignored an oncoming dog on a very narrow stretch of towpath this afternoon. She kept her eyes fixed on me – and the bag of chicken morsels in my pocket!

She walks well on a slack lead, but that’s not really down to me, she does it anyway. When we get out in the fields I let her roam on a long lead and take the opportunity to do some recall training too. At first she was nervous of the wide open spaces, but now she enjoys herself rooting around. 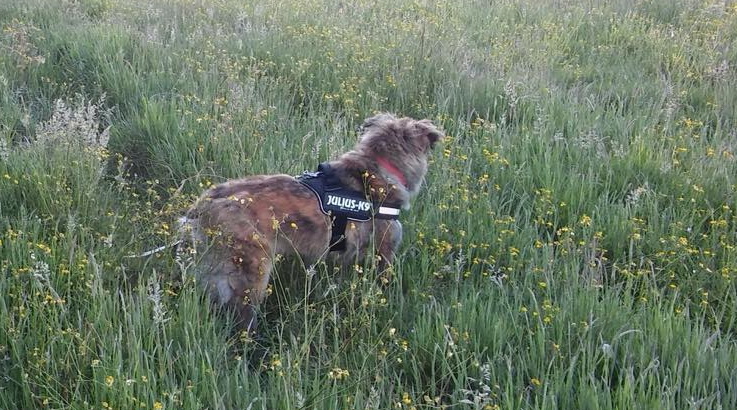 So long as there no one around I’m happy to let her have short periods off her lead local to the boat.

Food wise she’s been on dry food when we come back after the morning walk, then cooked chicken and rice in the evening. That’s what she was on with Valentina in the rescue shelter. But now I’m slowly weaning her off the cooked stuff and she’ll be a wholly dry diet soon. Quality stuff too. Growling Tums was recommended (thanks Alison) so I got in touch with them for advice and they were very helpful. Unfortunately until the C-19 situation is resolved their courier won’t deliver to a collection point, so we’re stop-gapping with another dry food I was able to source.

Didn’t realise that 12kg of dog food would be such a tight fit in my rucksack! 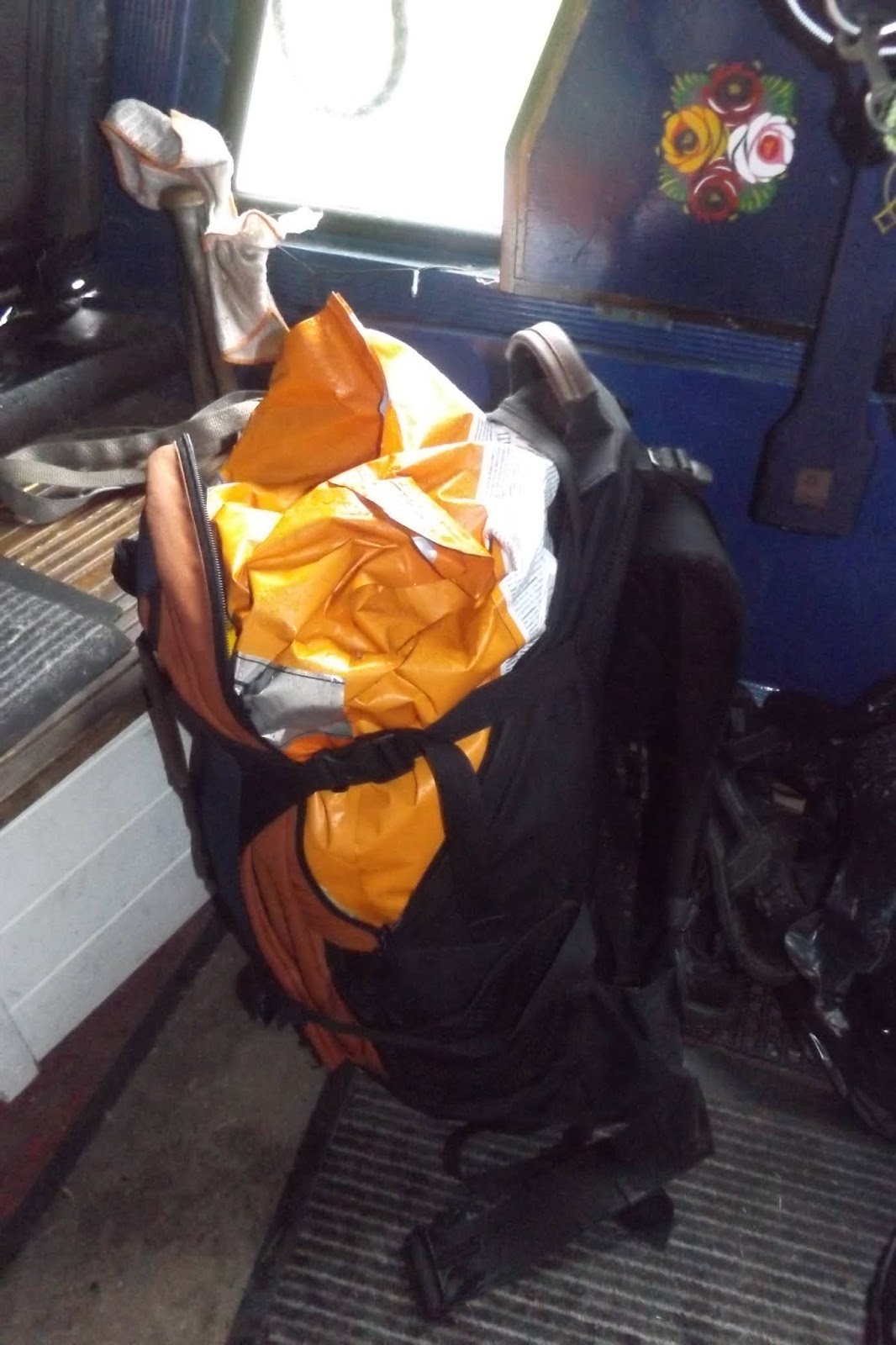 That’s about it. She’ll sit and lie on command without any problems, and I‘ve started mat training to calm her somewhat excitable tendencies. She’s going to make a good dog, I reckon. Everyone admires her looks, when asked what breed she is I just say “pick one, it’s probably there somewhere!”

We’re still pottering between the towpath and the Ellesmere Arm, going into town at the weekend for shopping. 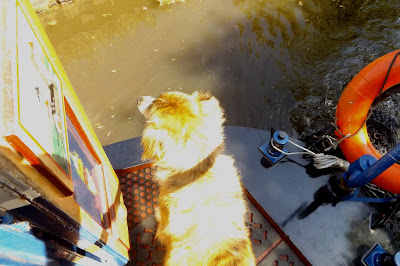 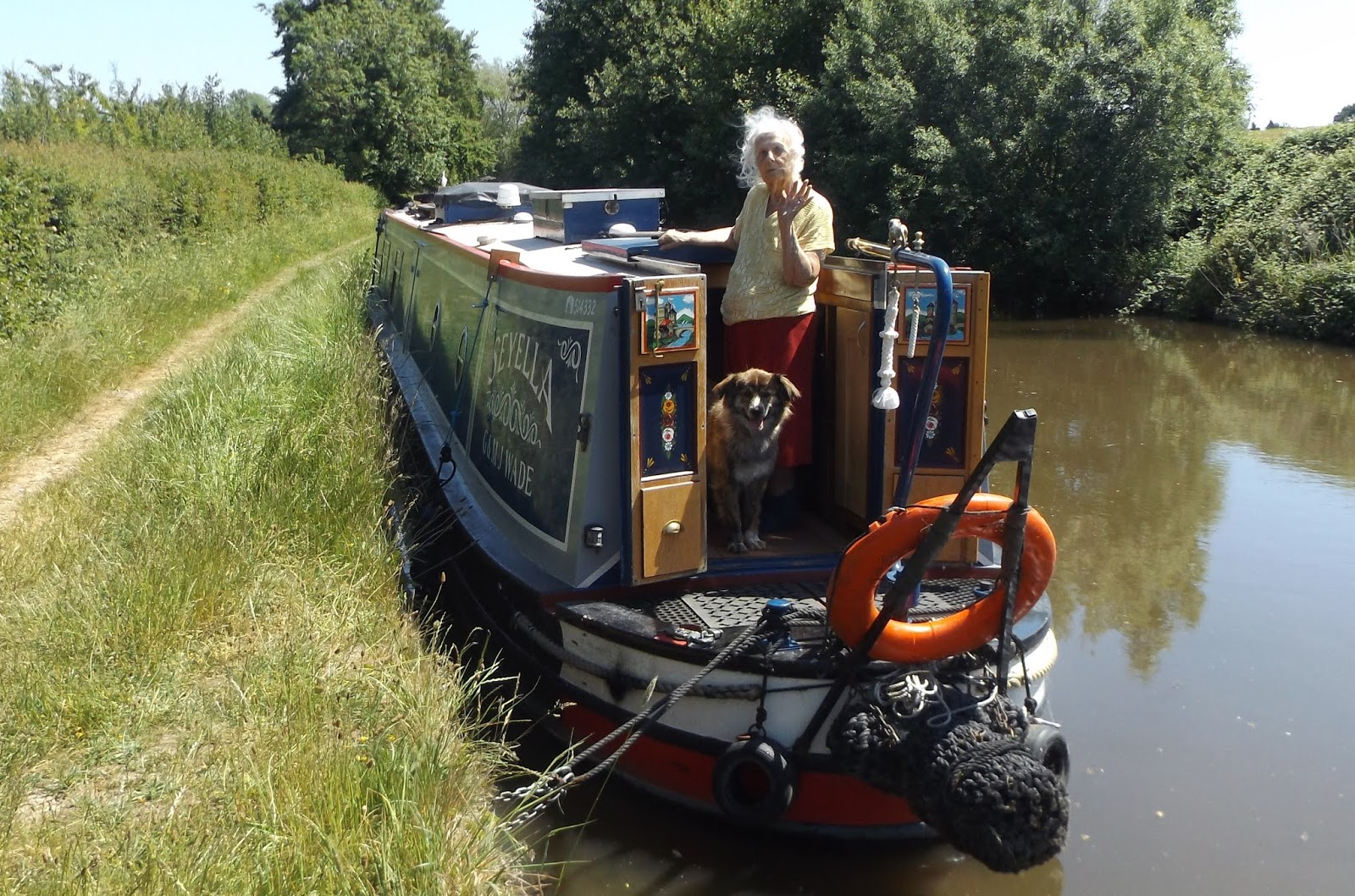 This Friday there’s an extra delivery, though. Our ageing fridge has finally turned up it’s toes. The compressor is running all the time but the freezer compartment won’t drop below 1 or 2 degrees. So it’s either the compressor itself or a loss of refrigerant gas.Rather than mess about trying to repair the 14 year old unit we’ve a new Shoreline coming on Friday afternoon.

That’s it for this week. Take care, keep well. TTFN.
Posted by Geoff and Mags at 9:53 pm 4 comments: