My posts recently have been weekly, or thereabouts. While there's nothing much happening I reckon they'll stay that way for a while.

So, we stayed just at the start of the Ellesmere Arm for a little longer than planned, but we moved across to the services on Monday to fill and empty before moving out a little way into the country. It seemed everyone else had the same idea, and it was nearly two o'clock by the time we'd got sorted.

Consequently we didn't get very far, pulling in after just 15 minutes near the winding hole. It was a bit damp and gloomy anyway.

Moored on Monday afternoon with a pair of swans for company. 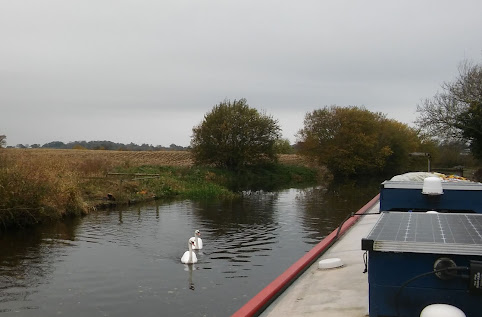 We stayed here until today, enjoying the relative quiet, moving on later this morning.

Autumn has definitely arrived, there are more leaves in the water clogging the prop than are left on the trees! 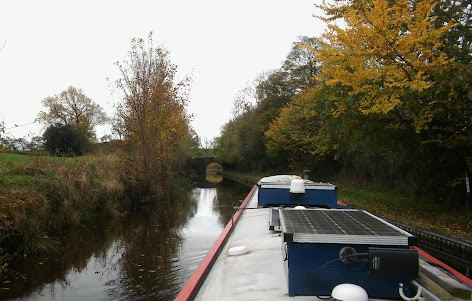 We cruised slowly past the moored boats between bridges 60 and 61, then past the Tetchill visitor moorings, before we could speed up a little as we approached Val Hill. 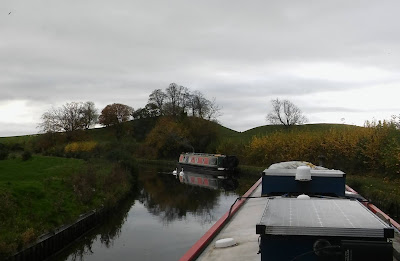 Not too fast though, the batteries were getting a little low with all the idleness we've enjoyed these last few days, so extending the time we cruised by going slowly would give us a few extra amps. And anyway it was a pleasant day so what's to rush for!
The canal curls around the base of Val Hill, passing through three awkward blind bridges. 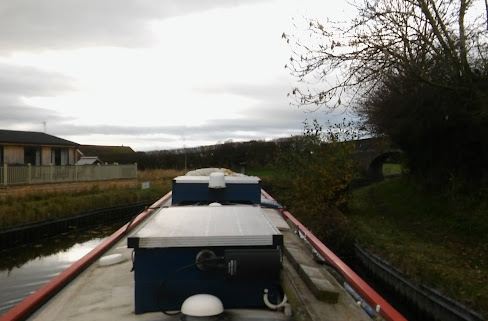 Interesting when the summer traffic is about!

We toddled on to Frankton Junction, where we interrupted a fisherman by reversing in to moor above the locks. 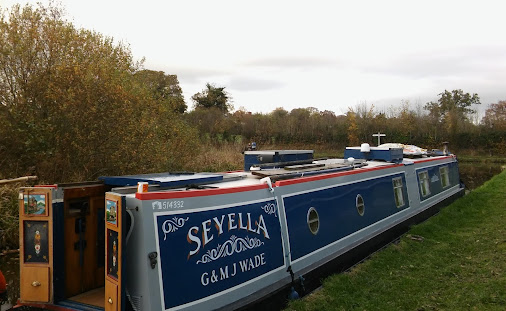 He wasn't too bothered though, and a mug of tea smoothed the way!

We'll have a couple of nights here.

You may have noticed that the photos are a bit sharper than they have been. My elderly and much abused Fuji camera has gone a little fuzzy, so I've pressed an old phone with a particularly good camera into service. Might even stick with it for a while. And I'm having to replace this laptop soon, it's starting to switch itself off unexpectedly. Yes, I have checked that the cooling vents are clear and the fans are working! The touch pad hasn't worked for ages, as well. I'll miss the old girl though. She's given me several years of service, upgraded through from Windows 7 to 10, and I installed more RAM and a 512Gb solid state drive a while ago. Shame she's getting a bit flakey. Good time to buy a new one though.

Not much to report.

We've not done so much in the last few days, in fact a trip that would normally be a good day has taken us eight! Such is our winter cruising.

We picked up the Tesco delivery a week last Monday evening as planned, then on Tuesday pushed on to moor near Prees Junction for the night.

Morris Lift Bridge, the one that takes a shoulder-numbing 85 turns of the windlass to lift... 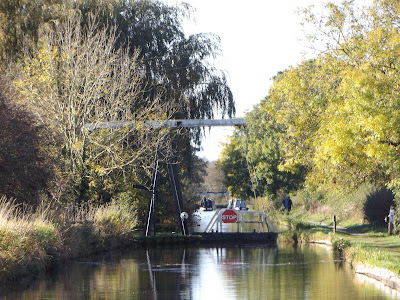 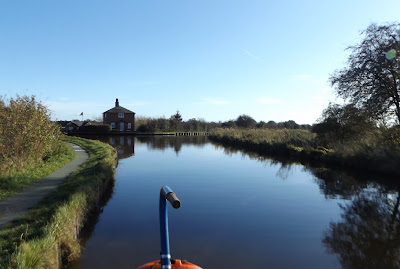 We would have stayed longer at the junction, there's access to several good walks from there, but the water tank was getting low so we had to move on again on Wednesday. 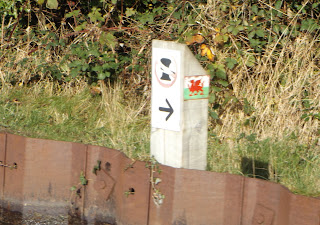 Topping up the tank in the sunshine at Bettisfield. 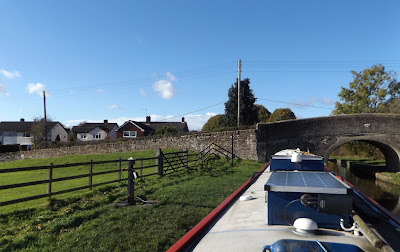 With a full tank we've a week before needing to find a tap again, so we cruised around to Hampton Bank and spent several days moored there, looking out over the Shropshire Plain. 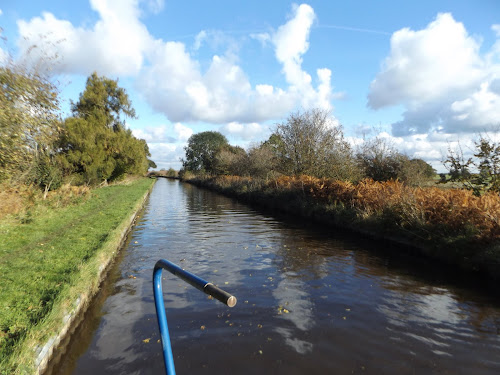 The weather was a bit mixed, some pleasant sunny days and some windy damp ones. But I was able to do some paintwork repairs where I'd scraped the top of the swan's neck under New Mills Lift Bridge the other week.

A few other smaller jobs kept me busy until we moved on up to Ellesmere yesterday (Wednesday).

Autumn has arrived near the meres... 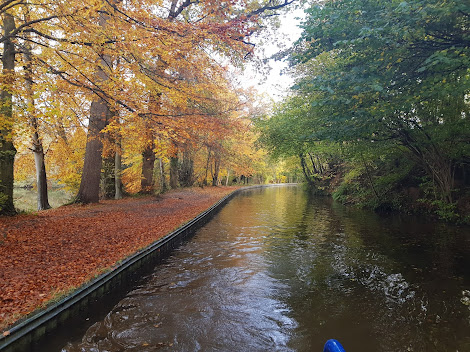 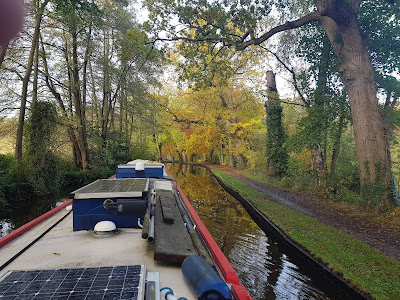 We topped up the water tank, emptied the loo and got rid of accumulated rubbish and recycling at the wharf opposite the Ellesmere Arm, then pulled across to moor just outside the arm. 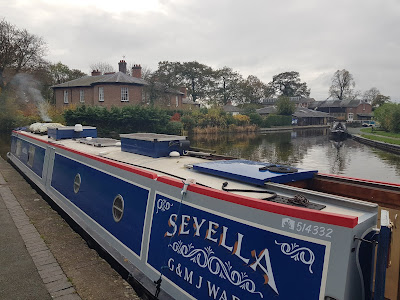 It's pleasant here, sunny when we have any and a little less footfall than down the arm. We'll be here for a few days I reckon.

Posted by Geoff and Mags at 7:56 pm No comments:

I’ve been a little remiss, not posting for nearly a week, but in my defense the interweb has been a bit patchy…

Anyway, we came up the Grindley Brook Locks last Wednesday, not meeting a single boat in the three singles, but having to wait for a descending boat coming down the staircase. An easy run though, about an hour and a quarter all told.

Through the railway bridge below the locks. 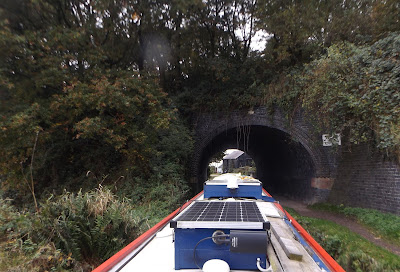 Lock 5 the middle of the three singles… 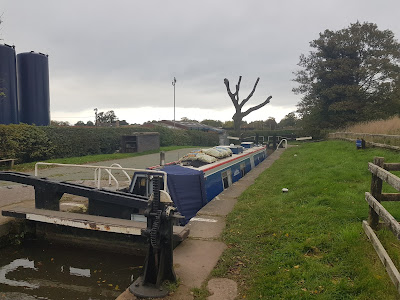 …and coming up the triple staircase. 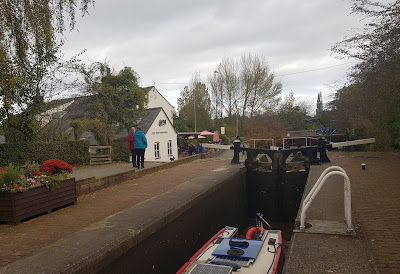 We filled and emptied above the locks and I was hoping to get moored on the rings but didn’t hold out much hope. A lot of boats were waiting here until Quoisley Lock was fixed, and several others were just lurking…

But one pulled out and headed for Whitchurch just as the tank filled, so we dived into the vacant slot.

The weather wasn’t conducive to cruising on Thursday, wet and very windy. Most everybody else thought so too. There was no-one coming up of course, and only a couple of hirers heading down.

By lunchtime on Friday the weather front had pushed through and the clouds started to thin so we pushed on, towards Whitchurch. 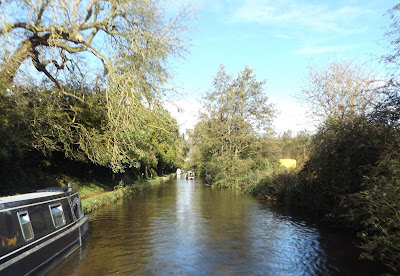 There are another three lift bridges to deal with just up the canal, the first next to the Whitchurch Arm junction and the others close together a half-mile further on. I got through the first two on my own, at the third a boat was coming the other way after I’d got the bridge up so their crew crossed over our counter to drop it after they’d gone through.

Lots of boats at the hire base at Whitchurch. 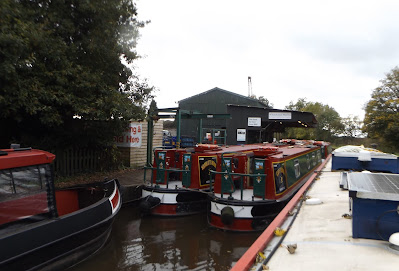 Several were from Wrenbury, they’d obviously arranged to leave them here rather than be late back because of the stoppage.

But they’d be able to sort them out quickly, Quoisley Lock was fixed and re-opened at two o’clock that afternoon.

We toddled on in steadily improving weather, finally stopping in a sunny spot just past Duddleston Bridge.

Another weather front passed over through Saturday and into Sunday morning, but had cleared to blue skies by half eleven so we upped sticks and moved on.

We’ve a Tesco delivery organised at Roundthorn Bridge on the mosses for Monday evening, and I wanted to be there on Sunday to make sure we were handy to the walker’s car park there.

Just one lift bridge to do, and that was lifted for me by a chap and his son out for a bike ride. As I approached the bridge he shouted from the towpath that he’d lift it for me if I threw him my windlass. Not one to look a gift horse in the mouth I obliged… 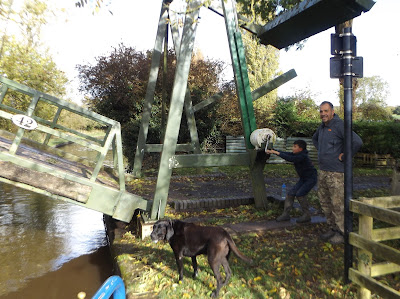 He put his son to work keeping up the family tradition. His father used to bring him down here to help the boaters too!

At one point I thought I was going to get wet, but luckily it blew over with only a few drops shed. 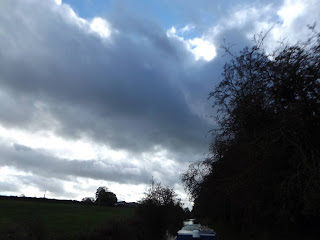 The squirrels were very active on the towpath, setting aside acorns for winter stores. 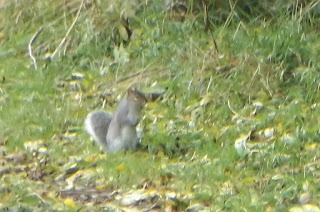 Not a good photo though.

We got tied up at Roundthorn Bridge before one, just where we wanted to be. 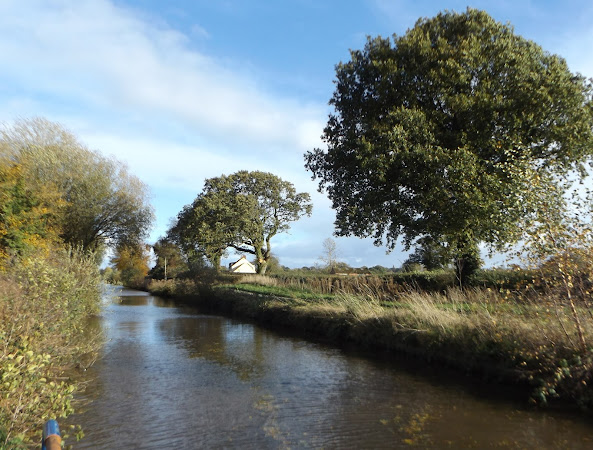