Meg and I came across these remains yesterday morning. 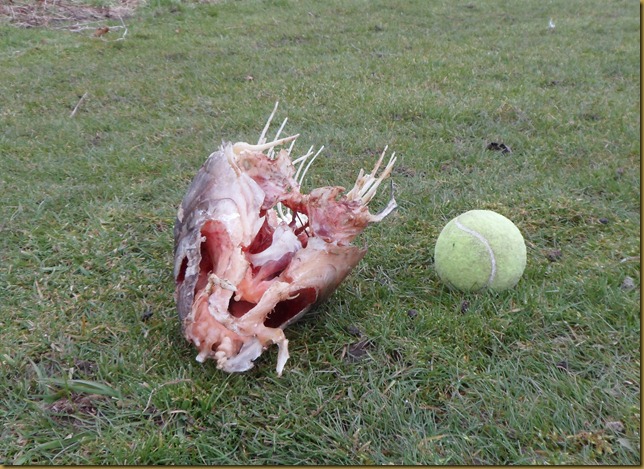 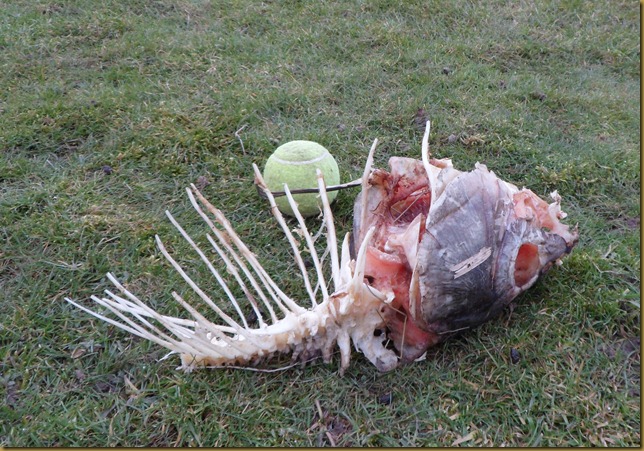 Meg’s tennis ball is there to give an idea of size….. that was a big fish!
Must have been a particularly strong heron to have landed this beast – maybe he used a crane????

Less than a week to go now till we re-emerge onto the canal. Working through a list of things to do before we head off.
I’m pretty well finished with all my little “projects” that have occupied my time over the last couple of weeks, the last job is to fit the new deck boards leading down from the counter after I collect them tomorrow. A thorough cleaning in the engine bay, get all the laundry up to date while we’ve power and water easily available, do a big shop to top up the cupboards and take Flossie back to Dad. Then we should be ready to hit the {water} road on Friday morning.

We’re both looking forward to leaving now. It’s been a useful interlude, allowing Mags to recover from her stroke without any stress, but it’ll be nice to look out of the windows again and see countryside instead of boats. 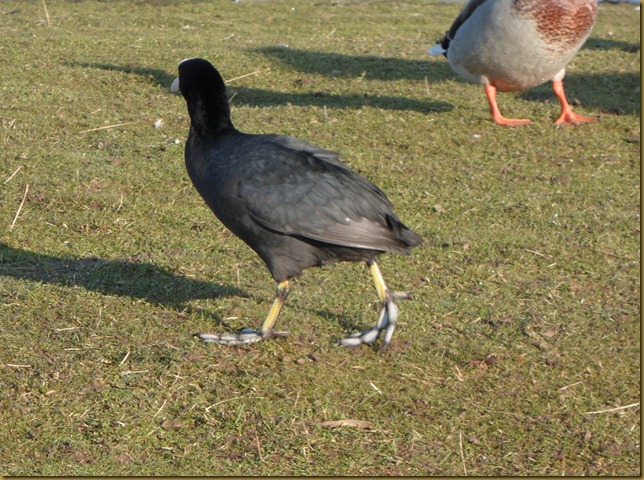 Great for walking around on unstable footing, though. 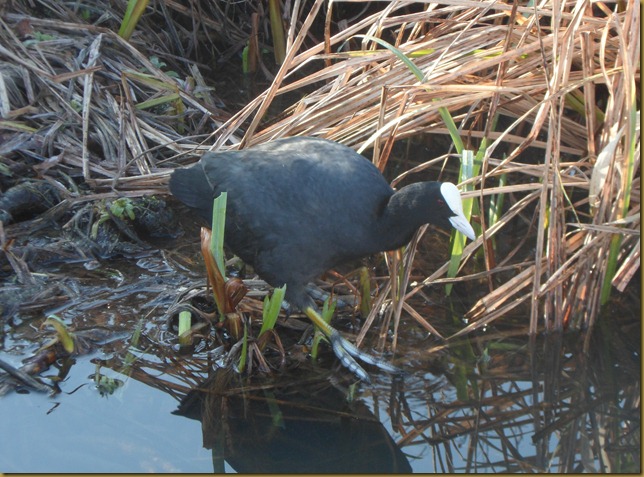 Of course, these water birds are rails (Rallidae), rather than the ubiquitous duck, and are specially adapted for mooching about in reed-beds and other vegetative water fringes. Like the moorhen, another common resident, their long toes allow them to spread their weight over a bigger area.
I just hadn’t realised how odd they look. There’s a large population on the old gravel pits adjacent to the marina, and they’re used to being fed and are therefore bolder than most of those out on the canal. It’s rare to get so close to one on land.
They’re not so good for propulsion, of course, and running…. well I burst out laughing this morning as a coot hurried up the bank to the breadcrumbs and fell a**e over tip over it’s own toenails. 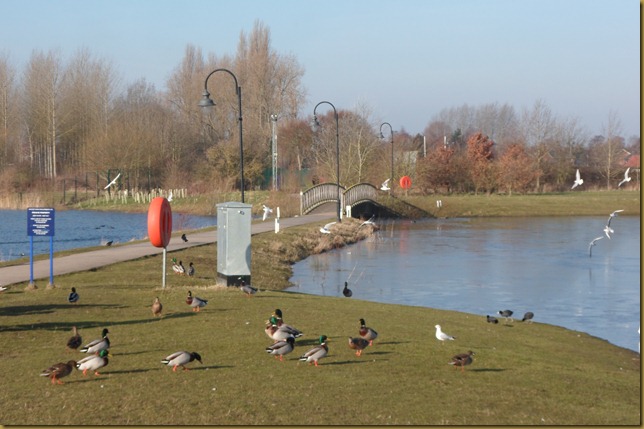 Black-Headed Gulls sunbathing on the ice this morning 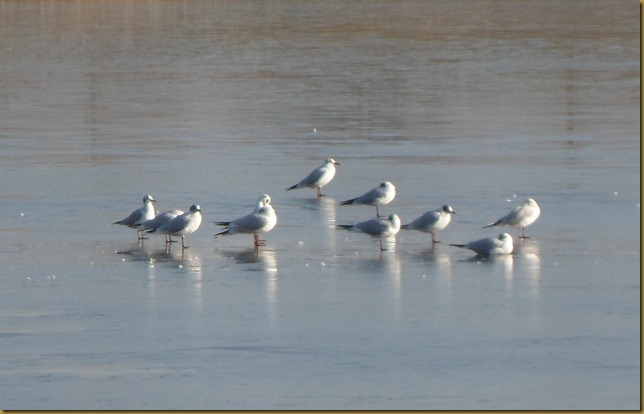 Yes, I know they’ve not got black heads. They’re still in winter plumage. When they moult in the spring the new feathers will include a distinctive black ski-mask.

I’ve seen some weird and wonderful additions to narrowboats over the years we’ve been afloat, but this is a first…. 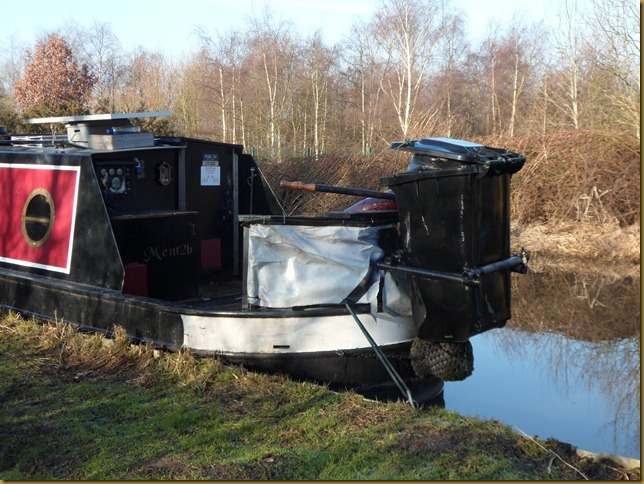 Yes it is a wheelie bin!
They’re often encountered in the cut…..

Reflections of the access bridge from the opposite towpath. 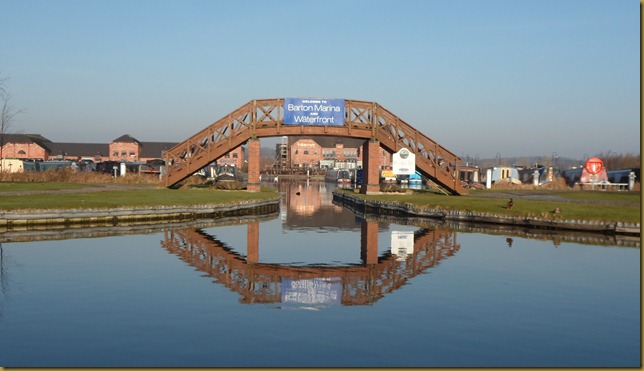 The other day I spotted a small damp patch next to the front cabin steps. On investigation I found that the domestic water pump had started to leak. Unfortunately not from the outlet side or the regular “running-up” of the pump to recharge the system would have alerted me sooner.
It’s happened before, about 3 years ago, but then the water ran a considerable distance under the laminate flooring and the corner cupboards before I realised. This time it was nothing like as bad, just affecting the area under the steps.
I bought a new pump and a repair kit for the old one last time, so had a spare to fit straight away, but didn’t want a leak to have such an effect the next time. So I’ve moved the pump position from the floor adjacent to the tank onto a drop down panel, vertically mounted on the face of the forward bulkhead. Any drips now will drop into a shallow tray which can be regularly checked through the access hatch to the tank, and it’s oh so much easier to get at the pump now than it was. 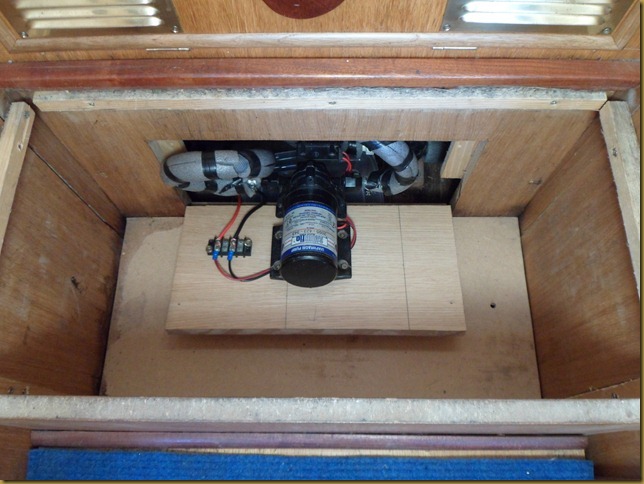 All closed up and ready for me to replace all my tools….. 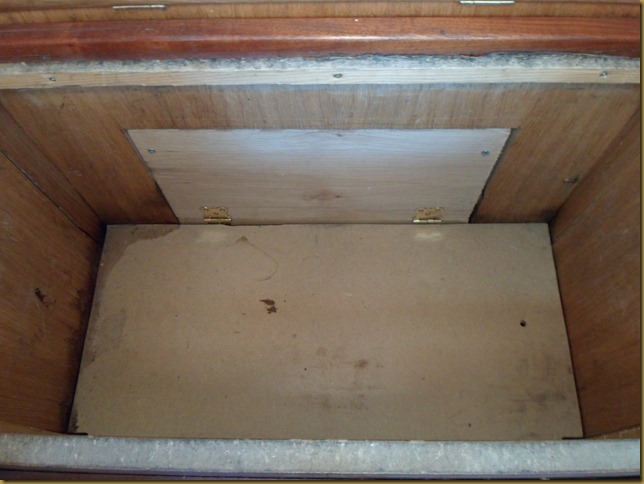 Note the lagging around the pipework in the top picture. The pipes froze in January 2009. Not since.
I’ve a seal kit for the leaking pump on order at Shobnall Chandlery.

Mags is still making steady progress, she’s sometimes a little wobbly and her left hand isn’t as strong as it was, but she’s getting there.

Early this afternoon, as I was heading back after a ball-chuck session with Meg, a boat on the canal gave me a shout and a wave. It was Jan and a couple of friends on NB Jandai.
They were moored in Birmingham in January when Dai had a fatal heart attack while out walking the dog, Foxxie.
I sorted Meg out then jumped on my bike to meet them at Barton Lock as they dropped down. Jan seems to be bearing up, although she’s not decided yet about the future and boating. Enjoy the trip to Thailand, Jan, and all the very best. Hope to see you again soon.

Hi Tom, yes that’s probably the easier solution. I have one already, cut to fit the side I’ve fitted the doors to, so it’s too short for t’other side. And it’s glued together with Araldite after it fell out one time… A new one with a hardwood frame would look better, eh.

Pip, I racked my brains to get around making them weatherproof, but in the end admitted defeat. It could be done, but I’d have had to leave the interior doors open when the exterior ones were shut. Not such an elegant solution. And anyway, I’d rather have the exterior doors shut in wet weather to protect the varnished panels.

That’s how I feel today having completed my latest little project. We’ve hatches on both sides of Seyella, one over the dinette table and one almost opposite. It’s very pleasant sitting at the dinette eating, or tapping away on my laptop, with the hatch open and lots of natural light coming in. But of course, this is only practical in warmer weather.
Several boats have internal glazed doors that can be closed when the outer hatch doors are open, giving light and a view out without the draught. That’s what I’ve been working on these last couple of weeks.

What do you reckon? Neat, huh? 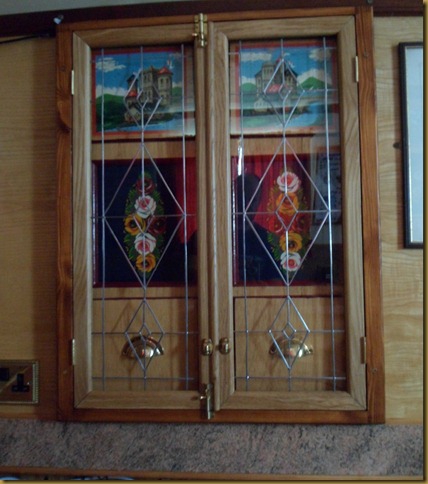 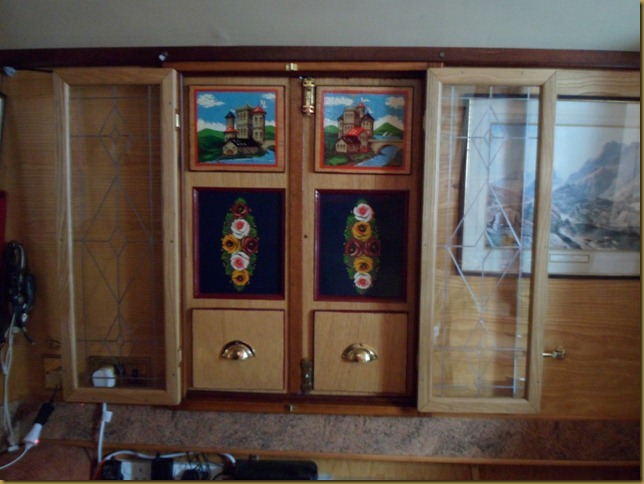 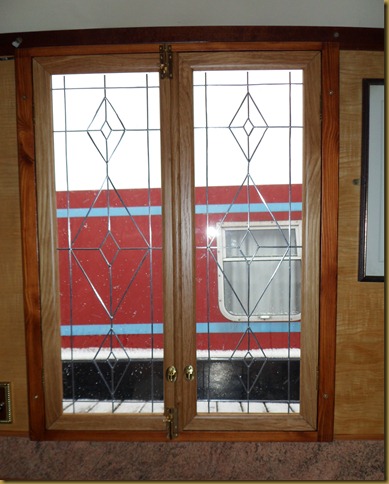 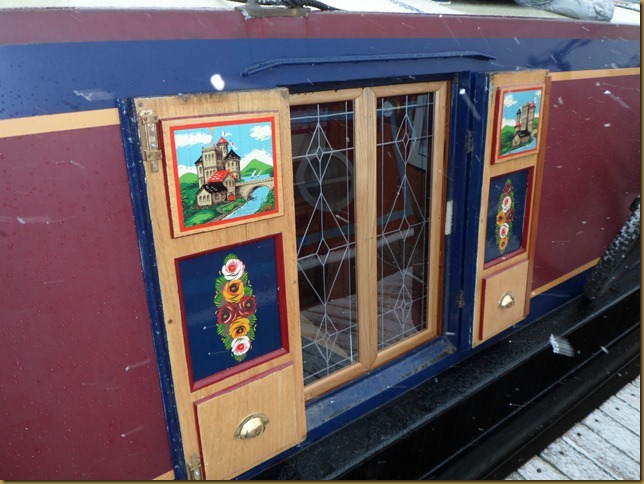 The streaks on the last photo are flakes of todays snowfall….

Not sure if I’m going to do the other side. There’s a roof hatch above the side doors as well, so the doors go right up to roof level, and there’s a cupboard on the left side which will prevent an interior door from opening right back. 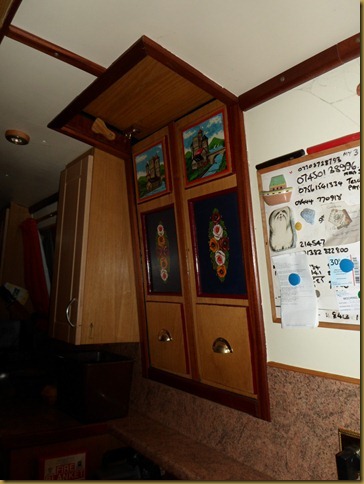 Nothing insurmountable, though. Bifold doors?

There’s another, rather larger, project started this week near the southern end of the marina. 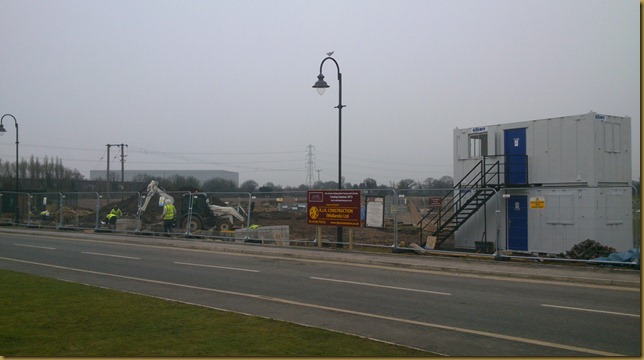 There’s going to be a two-screen cinema and cafe/bar here. Have a look - http://www.redcarpetcinema.co.uk/

The snow is turning to rain now, and the week is supposed to be getting a bit warmer. I hope the weather does improve, we’re supposed to be out of here in just over a fortnight!

For the first time in a week we woke up to calm conditions, the water on the marina just gently rippled in a light breeze. 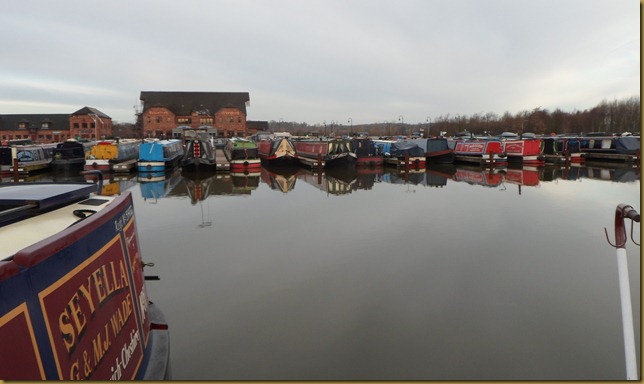 We’ve had a steady week, Mags’ appointments at the docs on Monday went well, on Wednesday we went to my folks for lunch and to pick up a couple of parcels, and in between I’ve been working on my little project.
Lewis and Pawel, you were close, but not right on the money. I’m not relining the side hatch doors, I’m fitting interior glazed doors. 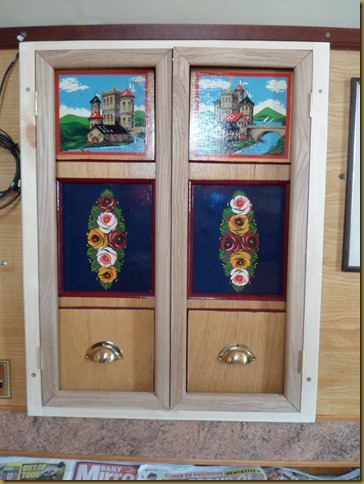 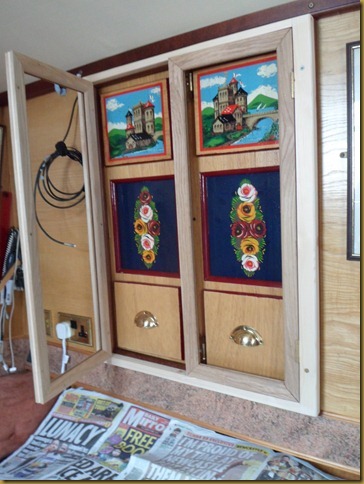 All the construction is done, now comes the hard work. Sanding, staining, varnishing, glazing and fitting of the “furniture”. Another week, maybe. Should be OK.

A bit of a project…

I mentioned the other day that I had a small job in mind, one that I’ve conjured with for some time. While we’re here, stationary, and with transport to hand, it seemed a good time to get started. With a trip to B&Q and Wickes.

Know what it is yet? 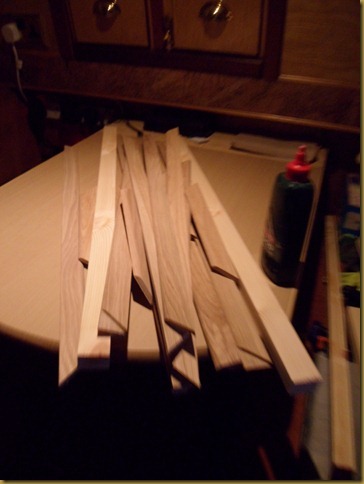 A bit unfair, eh. Maybe this will help. 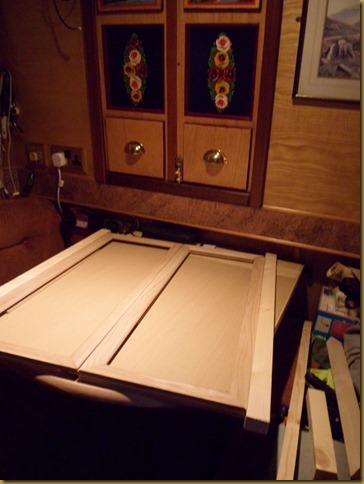 There’s a clue in the background.....

I had a bit of a drama this morning while out on my morning run. I lost my gate key.Unfortunately it not only opens the security gates, it also affords access to the “facilities”. An essential part of marina equipment. But that’s not the worse, there’s a £35 deposit on the thing!

Postponing my shower and breakfast, Meg got a quick comfort walk and then I set off to retrace my route on trusty old John Sage. Only he wasn’t so trusty this morning. I’ve been a bit lazy these past few weeks, with Dad’s car Flossie to hand (see where I get it from…) the bike hasn’t seen any action. It was only when I set off that I realised the back brake was dragging. This made the trip more of a workout than the gentle pedal it should have been. Another job to sort out, then.

Anyhow, I found the key, still on it’s distinctive keyfob from Red Lake Gold Mine in Canada, courtesy of Mag’s son Neil on his last visit. It was lying at the side of the path alongside the A38, just short of the turn into Branston Water Park. Whew, what a relief.

So my steady morning 5½ miler had another 4 miles of pedalling added. Ah well. What doesn’t kill you does you good.

We had a good day on Tuesday, went to Dad’s to pick up the mail and for lunch, then called to see Mo and Ness at Barrow. Balmaha is stuck on Barrow Cut, with high water on the Soar at either end. The towpath was pretty muddy though, so we met up in Peppercorn’s, a pleasant tea-room on the main street. A fine afternoon, chatting and catching up.
We’d planned to join them on what promises to be an interesting trip across the Wash in the Spring, but we’ve cried off till Mags is 100%.

That’s about it, Mags has two visits up at the local surgery tomorrow, one for a blood test then another to see the Doc to review her prescription. We’re getting far better service here than from our own surgery up north. Mags wanted an appointment with her own doctor to keep her up to speed, the earliest we can get is 26th February!

Oh, one other thing. Did anyone see yesterday’s Mirror front page? “RED ARROWS FACE AXE” Apparently the latest round of defence cuts could impact on the iconic RAF display team. Now, I‘m not going to get all political and controversial, I‘d just like to say that if the team is grounded I and 49,999 others runners will miss the lift in spirits we get when the formation of Hawk aircraft pass over Tyne Bridge as we cross the river. 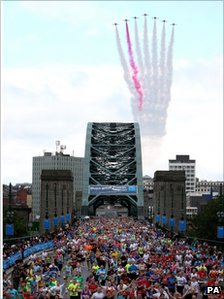 (courtesy of www.bbc.co.uk/news/uk-england-tyne-14963484
No, what I wanted to express was puzzlement over the main article on page 5. It appears that they must be very fit guys, those pilots. After all, they’re members of the “Royal Air Force Aerobic Team” Good job they can do aerobatics too….
It’s not just the printed version either: http://www.mirror.co.uk/news/uk-news/red-arrows-face-axe-threat-1569983