Back in Ellesmere again after waiting out the weather…

Last Wednesday we moved on from Monks Bridge, past St Martins and dropped down New Marton Locks. The locks are planned to close today for around 6 weeks, and we’re not the only ones wanting to get downstream of the stoppage. We stopped for the night below the locks, then moved on to moor less than a mile from Ellesmere. 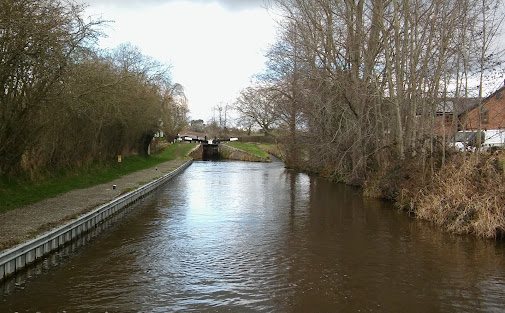 A brief splash of sunshine on gorse bushes near Tetchill 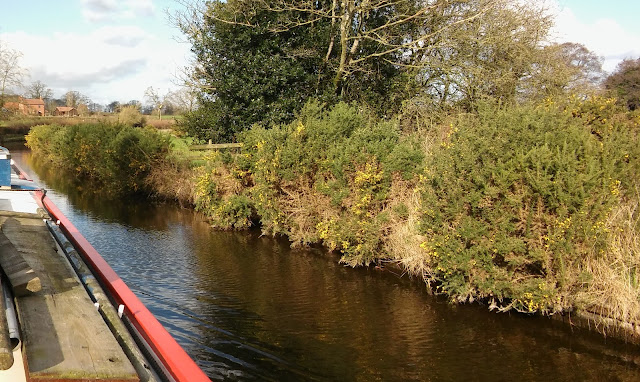 The weather, dull for the days we travelled, deteriorated rapidly with strong winds and heavy rain deterring me from moving in to the town moorings, so we decided to stay put but I walked in for some essentials on Friday morning. And got wet doing it…

Today dawned breezy but dry so we had a 20 minute chug and moored just on the outskirts of Ellesmere. Just in time, the rain moved in again and it’s been a wet afternoon. 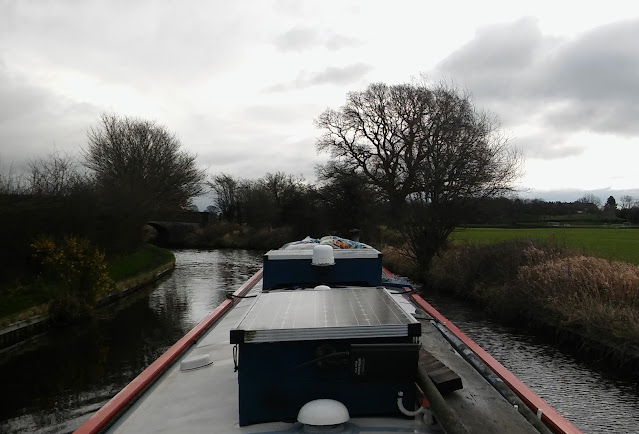 With the forecast as it is we’re planning on pushing on on Wednesday, looking to get tied up ready for the stormy weather that’s supposed to arrive on Friday.

You remember I said I was disappointed that I couldn’t install that extra hard drive in my new Huawei laptop? I finished up having the new 1Tb SATA drive plugged into a USB port to extend the original 256Gb CLIe NVMe solid state drive. I decided that it wasn’t a long term solution, it meant, among other things that the laptop wasn’t portable, with an external drive hanging off a connection cable. So I’ve now installed a 1Tb NVMe SSD in place of the original. That should last a while now. And it was remarkably easy.

Posted by Geoff and Mags at 7:19 pm No comments:

Plans made and cancelled!

We’ve spent the last few days over the border, but crossed back into England yesterday. 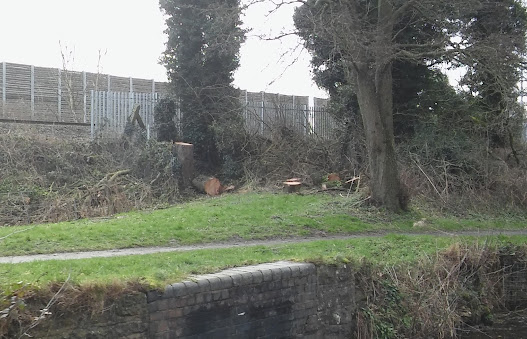 But this blow-down was too good to ignore! 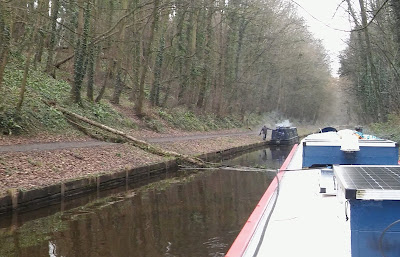 Mark on Great Escape, the boat in front, helped to haul it out as I chopped it up into logs, and he took the thinner bits, not having a chain saw.

There it was, gone! 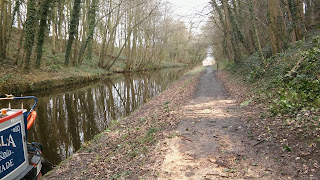 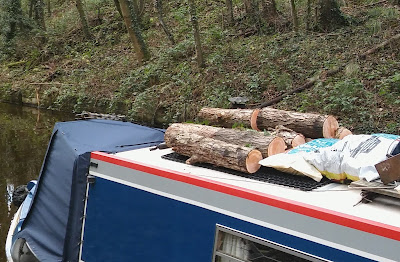 Back across Chirk Aqueduct into England. 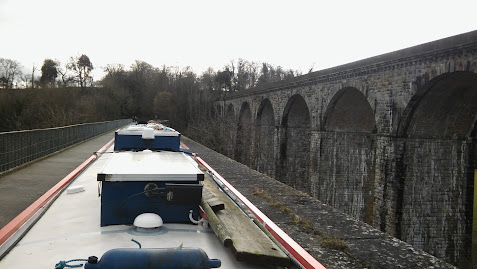 The stoppage at New Marton Locks, originally planned to be starting on the 21st, has been bought forward a week. So there are a fair few boats heading downstream.

We’d arranged to meet Val and John at The Poachers, but decided to pull in at Monks Bridge instead in case the Poachers moorings were full. 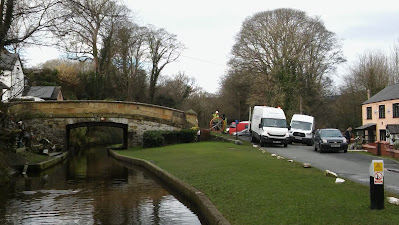 We had a good afternoon chatting and catching up, before they left us to head home. They brought us our mail and some bits I’d ordered online, and some beautifully fresh leeks uprooted from John’s veg patch that morning.

We stayed here last night and will be moving onward tomorrow. We’ll be needing water soon and the nearest tap is just this side of New Marton Locks.

I mentioned last week that we were waiting for Mags’ ERCP appointment to come through, but to move things along I rang the hospital directly instead. I was surprised and pleased when they offered Mags an appointment for the 17th! I thought we’d have to wait longer than that, the way things are.

So I arranged for a hire car for Monday 14th, a taxi to get me there to pick it up, and passage down Frankton Locks for the Friday before. The plan is to go from Queens Head down on the Montgomery Canal.

Feeling rather smug with my logistics prowess I unearthed my driving licence (not used for a while) and you can imagine my reaction when I found it had expired in the middle of January!

So Saturday morning was spent cancelling everything I’d sorted the day before!

There’s no chance of getting a new one in the time available, I can’t apply online without a current passport and that expired 25 years ago! So my paper application along with a new photo is winging it’s way to Swansea as you read this. When I know the new licence is coming I’ll do it all again.

Did I mention that I’d bought a new laptop before Christmas to replace my aging HP? It was cheap, a Huawei Matebook D15, even cheaper as I opted for the cut-down version with only a 256Gb SSHD but with a spare drive bay. The plan was to install a second drive, just a standard one though, for data. The stuff that Val and John bought included a 1Tb drive and SATA connecting cable. I knew it was an easy job, there are several UTube videos demonstrating just that. What I hadn’t realised was that they related to the 2020 model of the D15, not the 2021! This one doesn’t have the SATA connection on the mainboard! Why not???

I do have a spare hard drive enclosure so the large drive is now permanently plugged into a USB socket and is recognised as D drive. A bit slower to access than it would have been, but I’ve now got 1,256Gb of storage. It’s amazing to think that my first proper PC had just 2.1Gb!

Chirk Aqueduct and railway viaduct from below this morning. 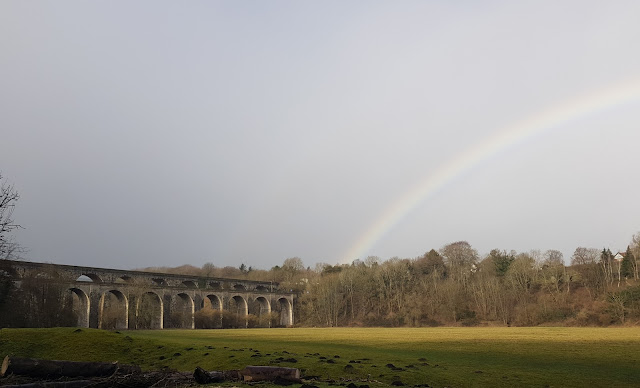 Well, another month has been put to bed, with not much happening here on the Llangollen Canal. We've been hanging around the Ellesmere area mainly, up to Frankton and back. 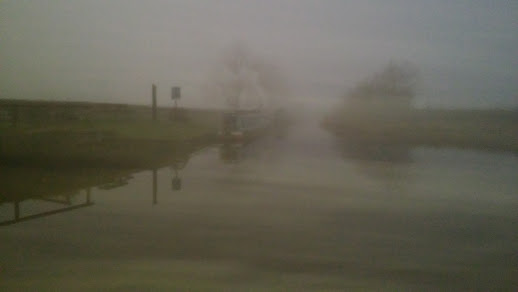 ...and a fine sunrise at Ellesmere. 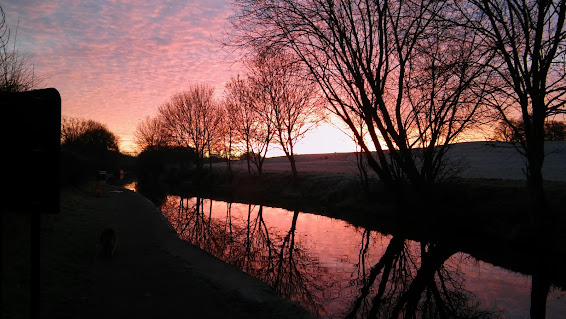 As you're no doubt aware it's been an exceptional January, a lot more sunshine than we'd normally expect. The solar panels have been making the best of it... 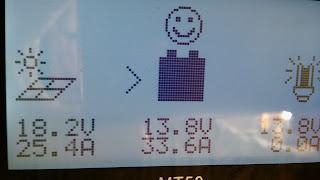 Not bad eh, nearly 34 amps in the middle of January! Only for a couple of hours, but that's ⅔ of our daily usage. The new lithium batteries are responsible for this, with a lower internal resistance than lead/acid, they're able to accept a higher rate of charge.

With this in mind and looking towards the (hopefully) long sunny days in the summer, I've been thinking about how to use the potential surplus energy generated. One thing I'd toyed with is water heating. We run the Webasto for an hour in the morning to provide hot water for ablutions, but by late afternoon this is too cool for washing up after dinner. So we have to boil the kettle twice (using gas), or run the engine or Webasto for an hour, wastefully using diesel.

A twin element immersion heater is now installed, the 230 volt 700 watt side for when we're on shore power, and a 12 volt 300 watt side to run when the batteries are fully charged and we've surplus solar power. An adjustable voltage sensitive relay ensures that the 12 volt side is only on when the batteries exceed 14.2v and disconnects at 13.7v. The draw down from the battery bank will be in the order of 25 amps, easily achievable with our 510 watt array on a bright day. 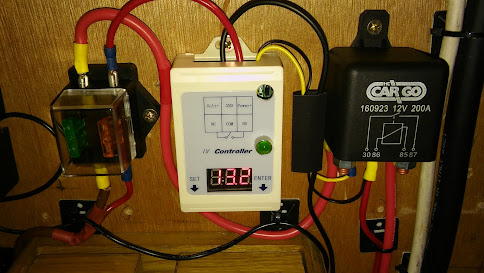 I got the bits from Bimble Solar, very helpful.

According to my high school thermodynamics, I reckon we could get 25 litres of reasonably hot water in a couple of hours. We'll know better when I've had a chance to try it out in real-world conditions. Roll on summer!

We've toddled up to Chirk for a few days, just killing time and giving us the opportunity to see friends again, but will be heading back downstream to clear New Marton Locks before the closure there on the 21st.

The triple at Chirk - aqueduct, viaduct and tunnel. 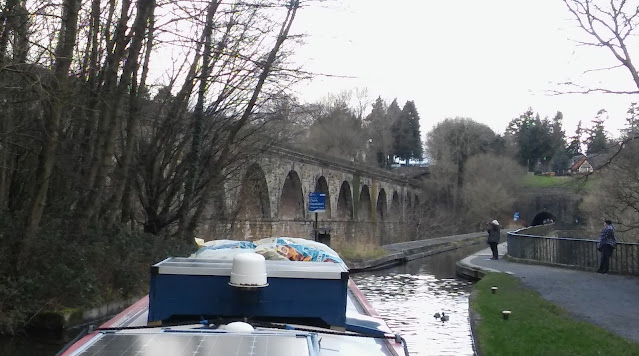 We're waiting to hear from the Royal Shrewsbury for an appointment for Mags bi-annual ERCP to keep her bile ducts clear to prevent jaundice. When that's out of the way we'll be heading back to the Shroppie then south, south and south!

Hi Sue, Mac. Sorry to hear Mac is still struggling, hope he improves soon. Looking forward to seeing you hopefully before we head off.

Hiya Lisa. Tell Dave he really needs to do the upgrade!