Off we go again….

We spent the last two days tied up near Banbury, waiting out the weather. In fact, Thursday wasn’t as bad as predicted, but Friday was worse, so it was a good move.
This morning was the first time in three days that Meg came back from a walk still dry, at least from the armpits (legpits?) upwards!

We pulled pins at around 10, us on point today.

Leaving our mooring of two days near Bridge 172. 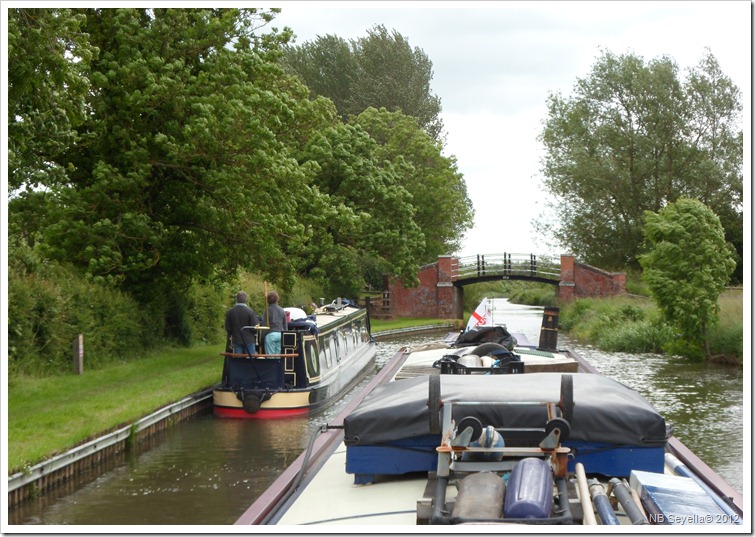 Although dry it’s still pretty windy, you can see that the tree-tops are bent over.

The M40 has been a constant background to our stay here, but I’m glad we were on this side, upwind, of it. 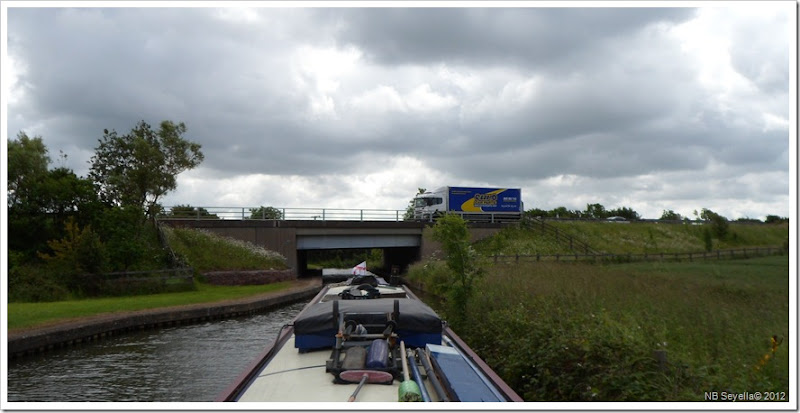 On the other side the noise from the carriageway was deafening, even on a Saturday. I dread to think what it’s like during rush hour. (Then again, if it’s anything like the M25 or the M63, it’ll be fairly quiet at that time. Traffic is mostly stationary.)

Grants Lock was our first today, a little over 20 minutes away. 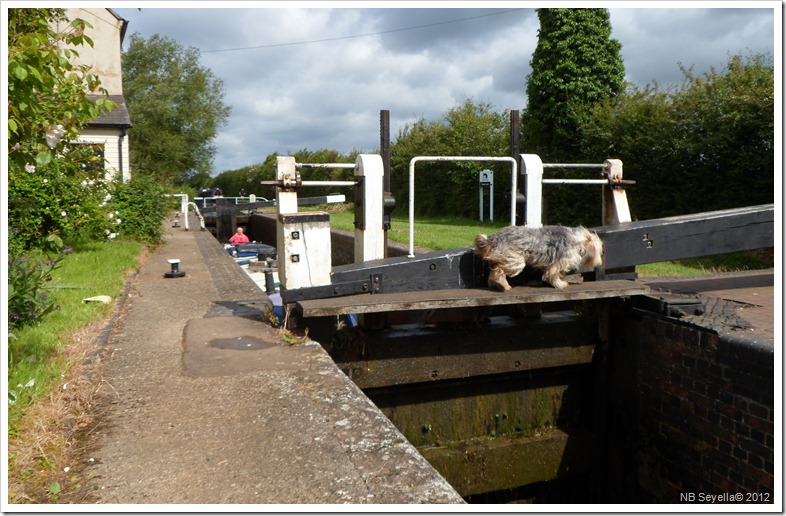 All the locks today were unusual for narrow ones, in that they have single gates at the bottom end. Most narrow lock chambers have a pair of mitred gates in this position.
The paddles are mounted on the gate. It makes for easy working from one side of the lock, but those gates can be heavy.

Spells of sunshine highlighted the newly washed countryside as we headed slowly south. 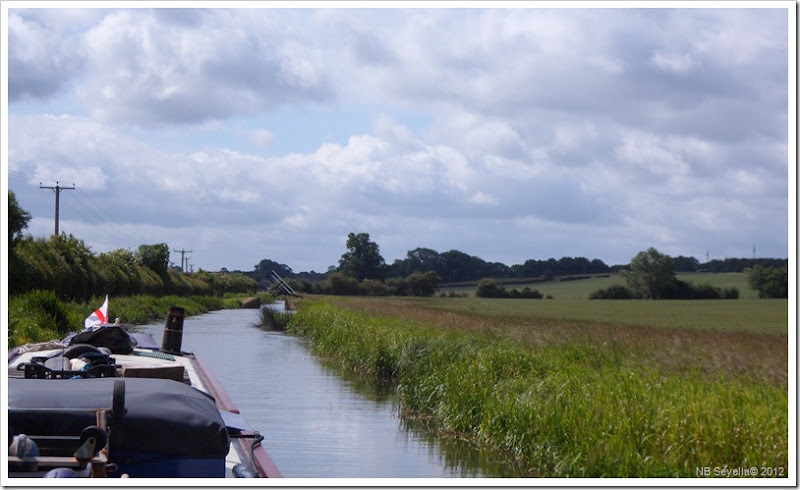 You might have noticed that the chimney has made an appearance again. Well it was so damp and miserable yesterday that we had to have a fire, if only for the cheerful glow…

The village of Kings Sutton lies to the east of the canal, the other side of the River Cherwell. The spire of St Peter and St Paul’s Church is visible for some distance like All Saints’, Braunston. And also like Braunston it’s decorated with stone “crockets”. That’s the knobbly bits up the sides.

Looking at the website, it would be well worth a visit, but it’s a roundabout route from the canal, with the river in the way. The village was recorded in the Domesday Book of 1086 as “Svdtone”, and was listed as belonging to the crown, which state of affairs continued until the estate was granted to Richard De Camvill in 1156 by Henry II for his support.
The royal prefix didn’t appear for another 200 years (Suttun Regis in 1252, then Kinges Sutton in 1294).

There’s a lock on the canal here too. 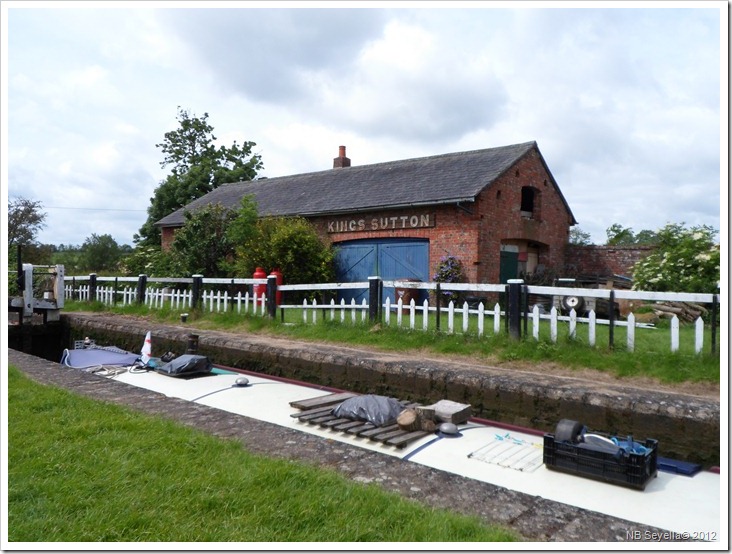 Meg met a beautiful English Setter here, who lives at the lock cottage.

Leaving King’s Sutton we dived under the M40 for the last time before it veers off to the east and heads towards London. There’s a contrast of old and new here, the motorway bridge and the wooden lift bridge both crossing the canal within a hundred yards. 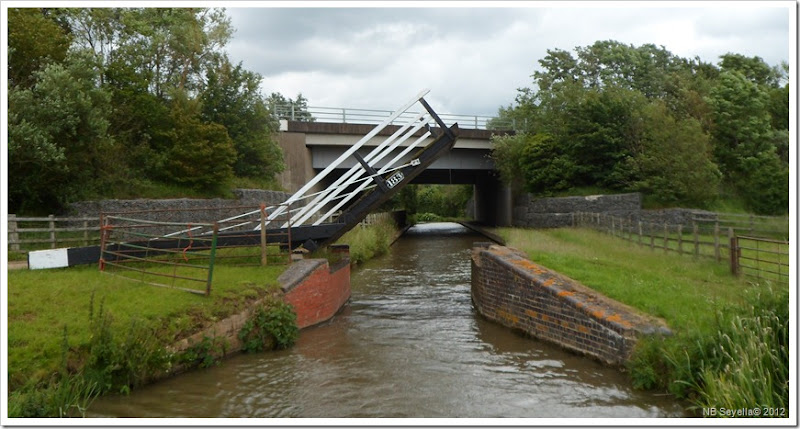 The canal follows a horseshoe course out to the west, before arriving at Nell Bridge. We passed a field full of flowering something or other, a delicate shade of Wedgwood.

There’s a Farm Shop here (oh, why didn’t we stop!), BW maintenance yard and another lock. 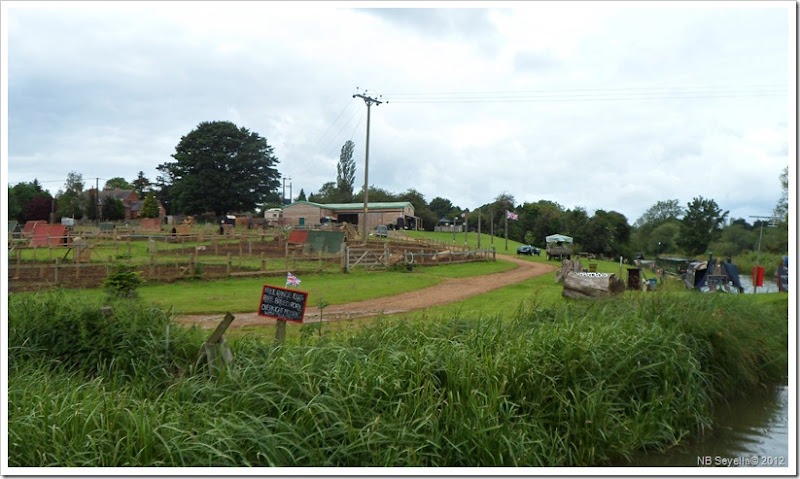 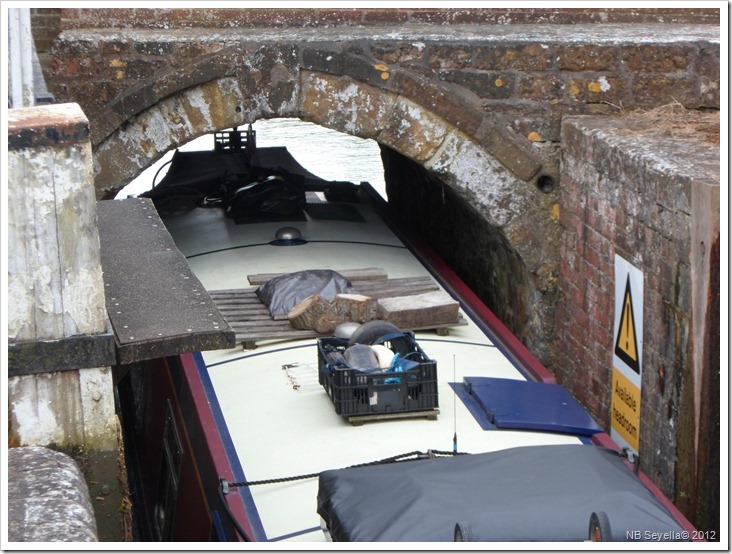 I took the chimney off again here!

The marker on the right indicates headroom from water level. As you can see from the picture above it’s fairly critcal. This section below the lock has the river running across it and is therefore subject to varying water levels.

Today, although we’ve had a fair bit of rain, the stream was quite gentle. 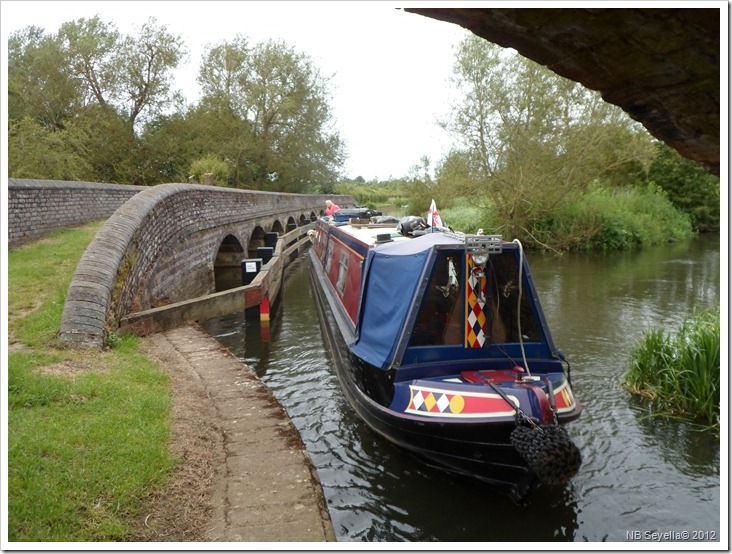 It’s a good job that the flow was amiable; it took me a while to fill the lock as I hadn’t realised that a previous boat had left half a bottom paddle up.

Just a piece of trivia; I already mentioned that the county boundary follows the river. Well, as we've now crossed the river... Yes we're in Northamptonshire, but only for a mile and a quarter till we cross it (the boundary) again. 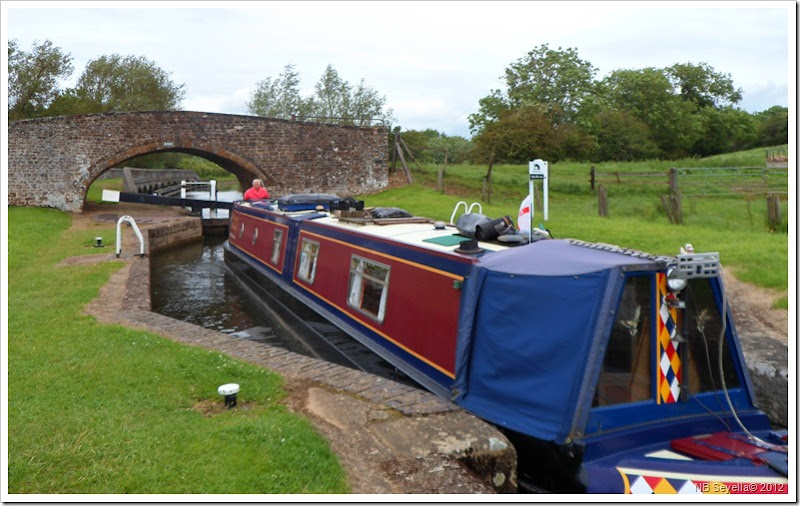 The shape is to ensure that a decent lockfull of water is sent downhill, even though the fall is only a foot. No you can’t really get two narrowboats in, and even if you could, that sort of defeats the object, doesn’t it?

Both boats pulled over to avail ourselves of the services on offer at Aynho Wharf, just a mile further down the canal. 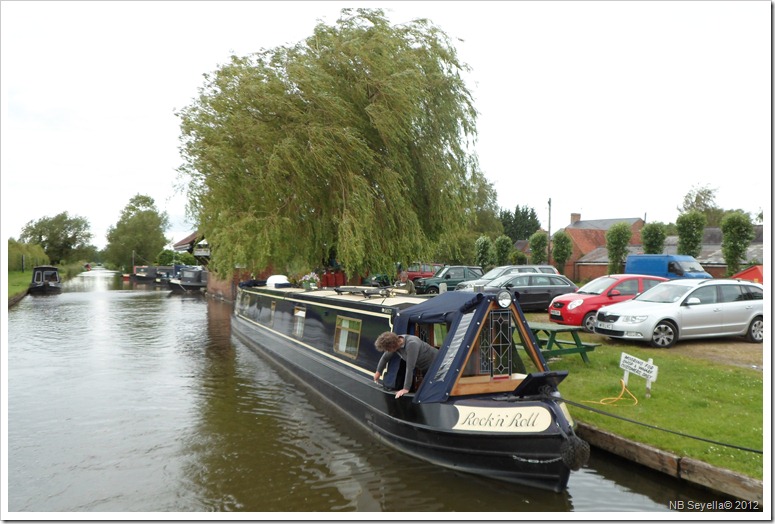 We had intended to moor somewhere near Somerton, another lock and a couple of miles further on, but spotted a pleasant looking bit of bank near Bridge 193 so pulled in there instead.

Moored about a mile from Aynho Wharf. 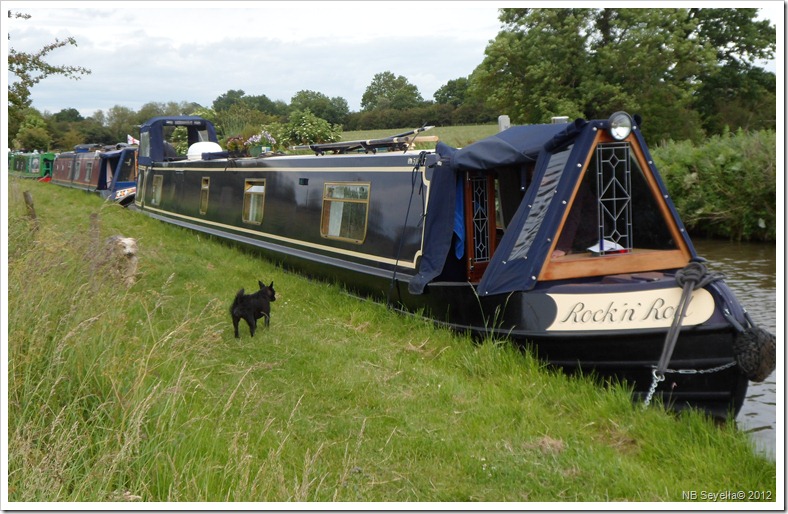 Although windy it’s been fairly mild and thankfully dry. Tomorrow we’ll head on a bit further, it’s supposed to be nice… although it's raining now.