Yesterday evening George got out the trusty barbeque, and we joined the “Rockers” for a very enjoyable few hours. Consequently I didn’t get this done last night…

The day dawned bright and sunny, and it fulfilled the promise of being warm and dry. We were off at 09:30, on the long summit pound to Claydon.
The canal does a sharp loop around Wormleighton Hill before passing the site of the abandoned medieval village of the same name.

Just humps and bumps indicate the site of the old settlement. 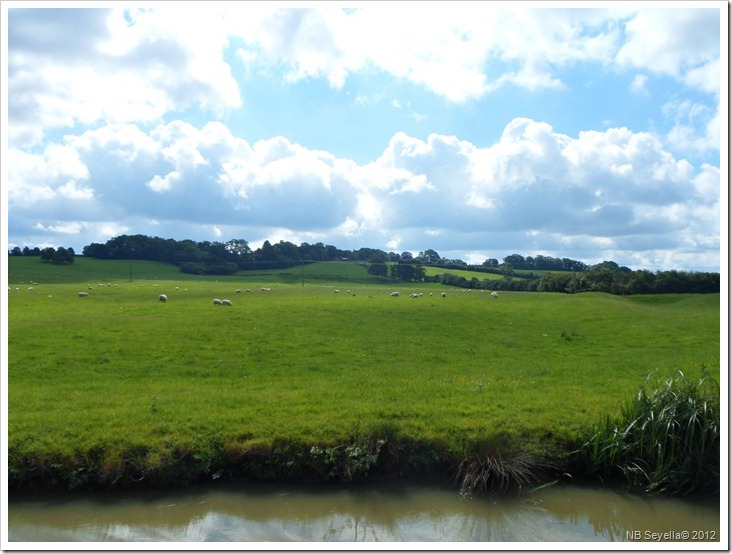 The “new” Wormleighton is behind the hill in the distance.
The old village was abandoned following the destruction of Wormleighton Manor by Royalist Forces in 1645. Although the owner, Robert Spencer, Baron of Wormleighton and Earl of Sunderland, fought with the Royalists under Prince Rupert, this didn’t offer any protection for his property!
The new village was established in the 19c.

There are a couple of unusual bridges either side of Wormleighton Hill.

Ladder Bridge is based on a single RSJ supported on brick pillars…. 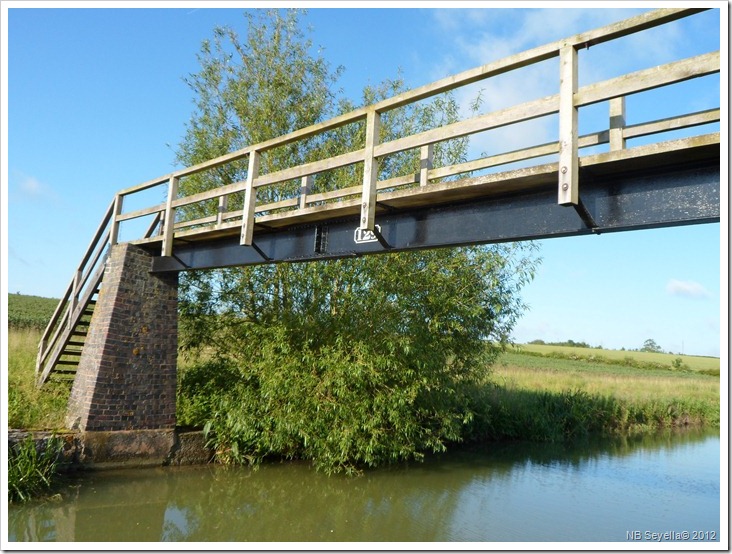 …while a footbridge further on is an all-timber span 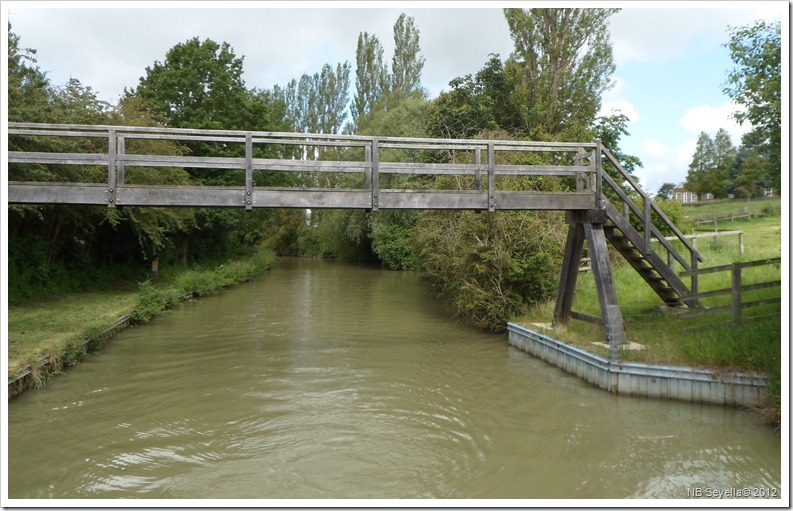 The support beams carry the legend “Wedding Bridge 2009”. Any idea why?

Fenny Compton was a scheduled stop, us to fill our water tank, R’n’R to top up the red stuff.

Fenny Compton Wharf, The Wharf Inn alongside the bridge. 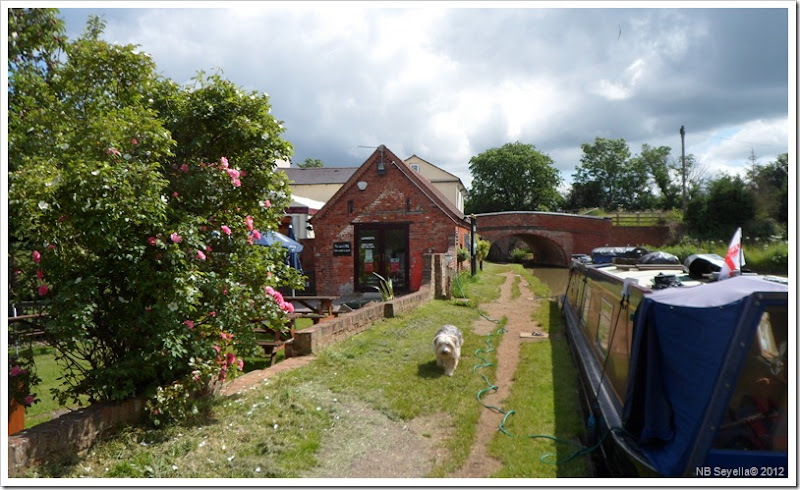 Looking back at Fenny Compton Marina, you can just see the nose of Rock’n’Roll moored at the service wharf. 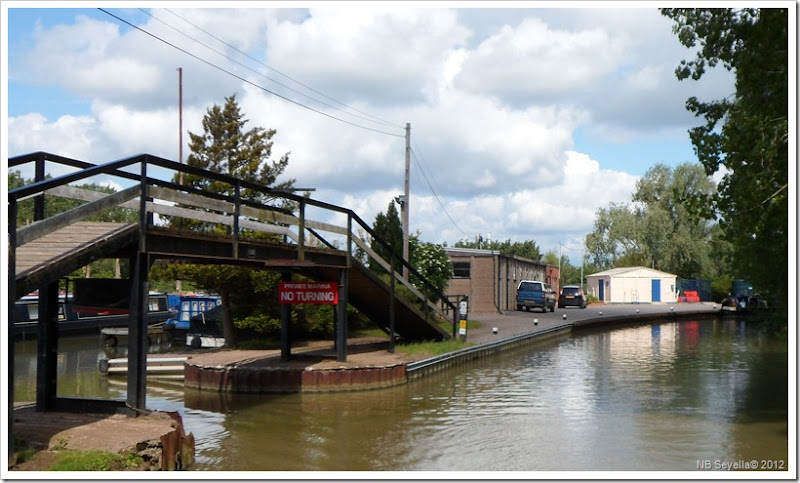 Leaving Fenny the canal enters a long straight cutting which once led to a tunnel. 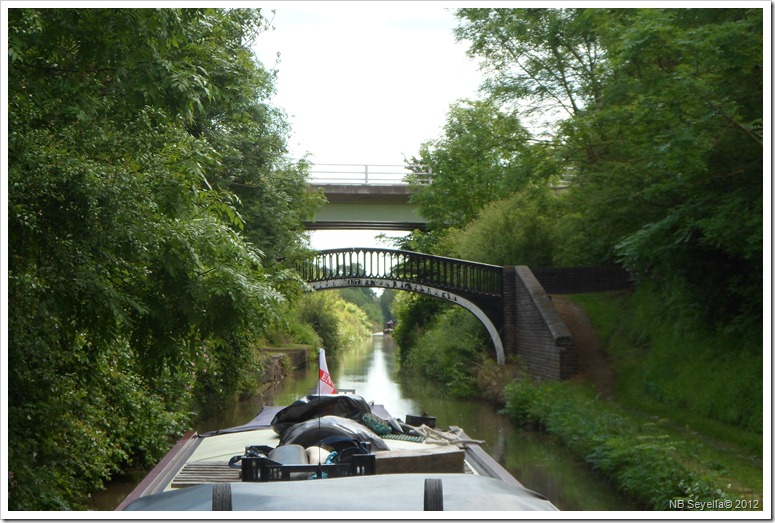 The tunnel was around 1200 yards long and opened in 1776. It was only wide enough for one boat, so passing places were cut at intervals. There must have been some heated exchanges about rights of way! With no towpath, rings were set in the walls for the boatmen to use to haul the boats through.
In 1838 the decision was made to open it up, and roof sections at either end and a bit in the middle were removed, leaving two short tunnels. The final removal of the roof took place in 1870, and bridges had to be built to cross the gap. The iron bridge dates from this time.

A mile or so of twists and turns took us to the top of the delightful Claydon Locks, dropping the canal 30’ 6” on the start of the descent into the Thames valley.

We passed from Warks to Oxon at Boundary Lift Bridge, the first of Oxford Canal wooden lift bridges heading in this direction. During construction the company were often strapped for cash, and these wooden bridges were a far cheaper alternative to the more traditional brick arch.

Mags crossing the border. Fore-end in Oxfordshire, back end in Warwickshire. 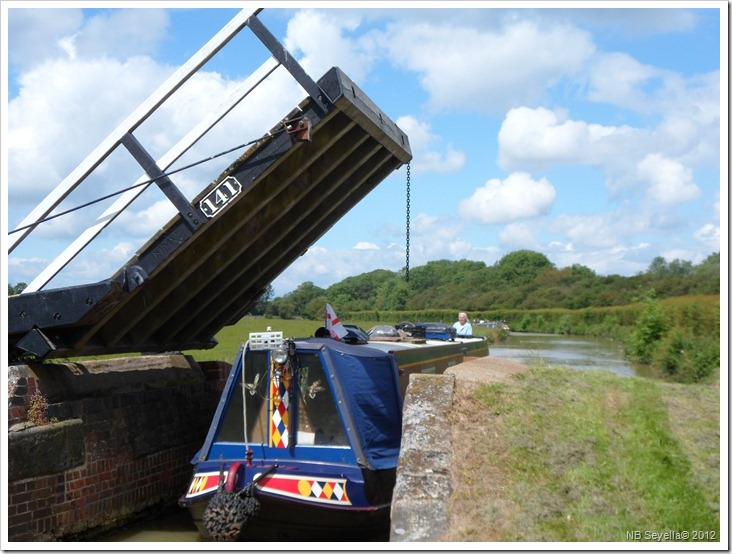 Into Claydon second lock, no 18 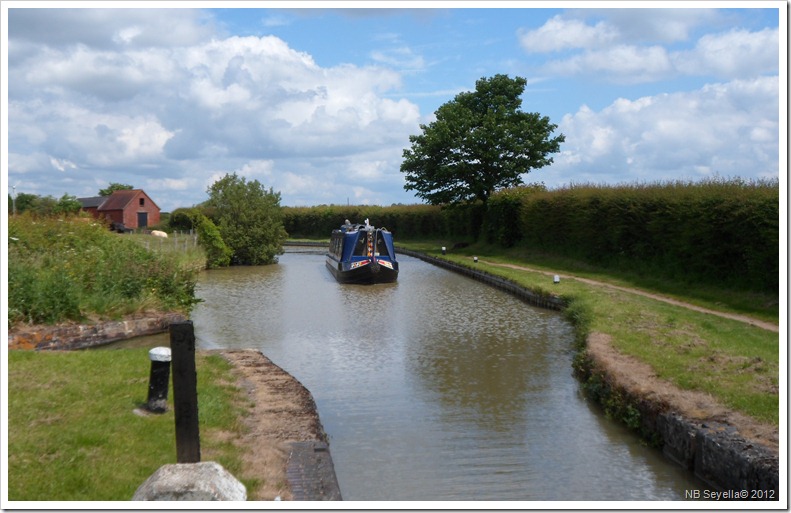 As she came into the lock, Mags shouted to tell me that a calf had fallen in the canal just below the top lock. I walked back to see what could be done, and managed to encourage it back along to the drinking ramp.

Come on, stop messing about! Back to dry land 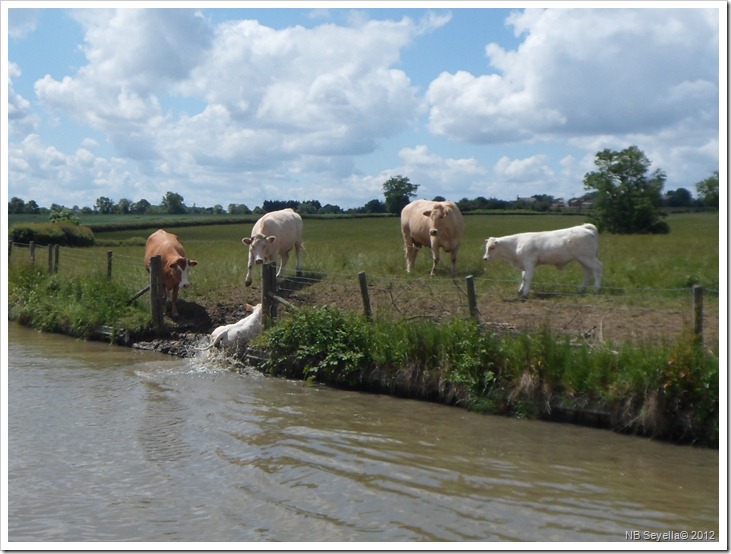 We dropped down the rest of the locks without further incident, meeting several boats coming up.

Heading to the bottom lock 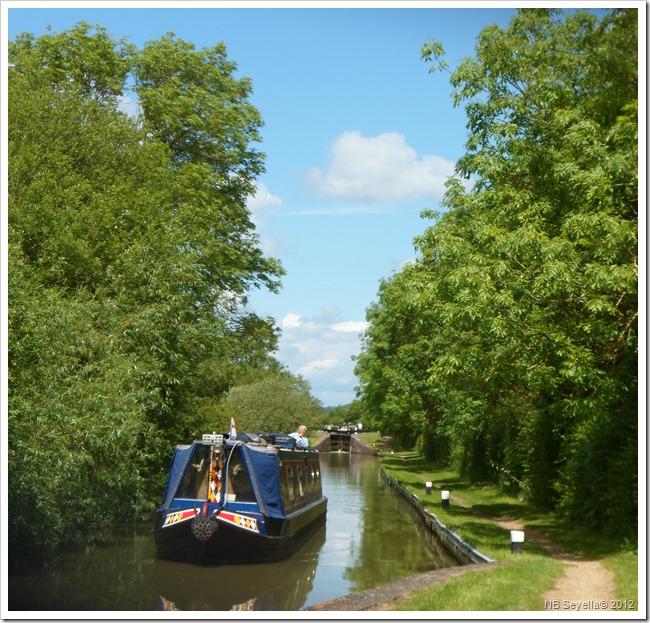 Just above the next, Elkington’s, lock, is Clattercotes Wharf, which must have been a busy spot at one time. 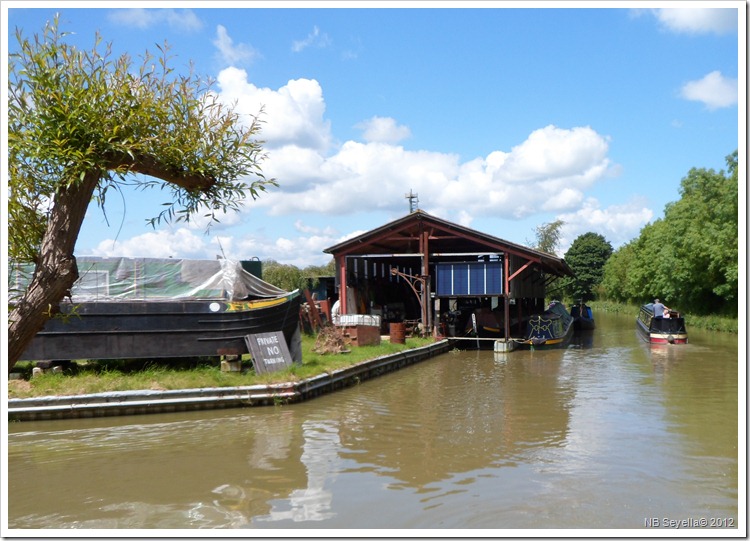 Varney’s and Broadmoor Locks follow in quick succession, above Broadmoor there’s another collection of old boats that the Oxford seems to be home to.

Needing a little work, maybe pruning for a start? 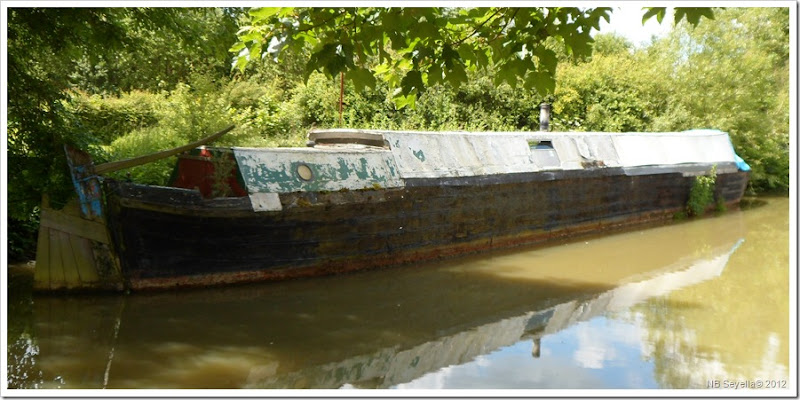 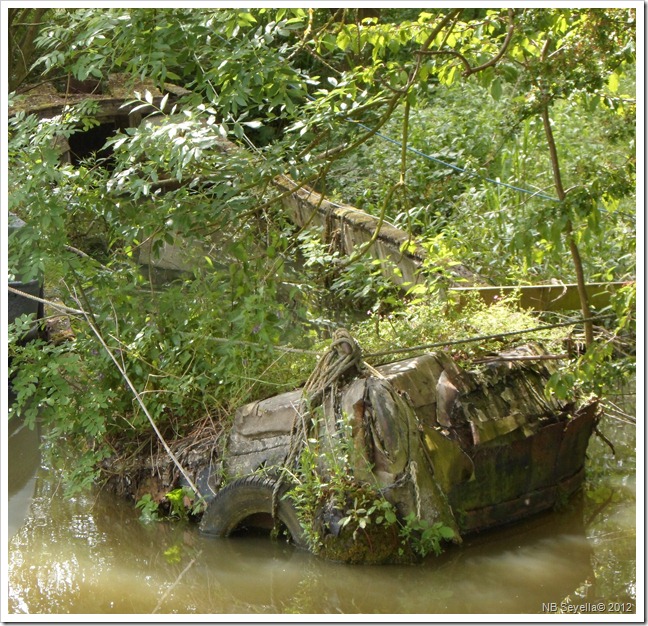 We moored half-way between Broadmoor and Cropredy Locks. Just as well, walking down we saw that the moorings nearer Cropredy were pretty busy.

I think that bridge way always called Wedding Bridge, although why I don't know. 2009 is when it was replaced. It's predecessor was the same construction, with just a single piece of timber, but sagged rather alarmingly, to such an extent that you worried about your chimney getting under the middle of it. I was pleased that it was replaced with something so similar, because it's pretty unusual.