I didn’t expect to be doing that today…. 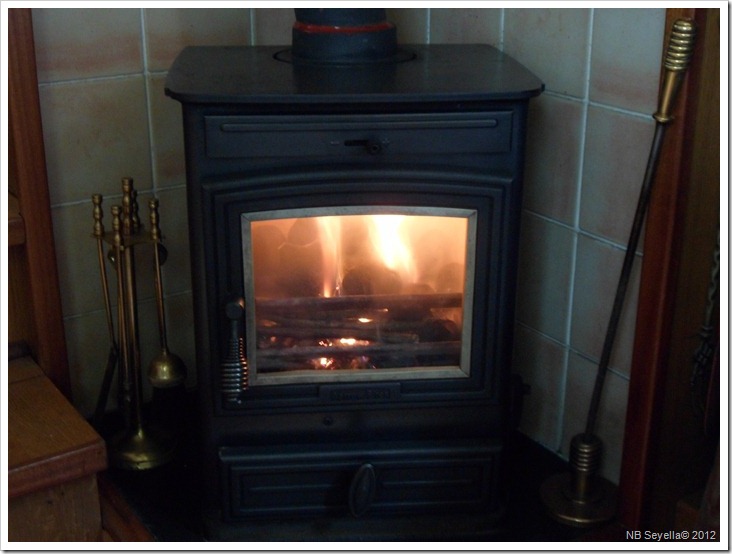 Today has been cold, damp and breezy, and we’ve more of the same due for tomorrow, with temperatures down to below 9°.

I could have put the heating on, but it takes a while to make a difference, costs around ¾ litre of fuel an hour to run, and uses 3 amps for the fan and the pump. The diesel is no problem, we filled yesterday, but if the boiler is on for any length of time then I’ll need to run the engine later to replace the power used from the batteries. And that will cost another litre an hour….

So all in all it’s cheaper and more efficient to light the stove, especially as we’ve foraged wood for fuel. I’d stripped it down last week for a thorough clean, replaced the fire bricks, door glass and rope seals, then blacked it so it was looking brand new. I was hoping it’d stay that way till Autumn. Some chance!
It didn’t get lit till we arrived in Stone, Mags wrapped herself up in a fleece blanket so I took the hint.

We got off a little later today, a bit after 10 o’clock. It’s a pleasant enough trip from Barlaston to Stone but nothing out of the ordinary. 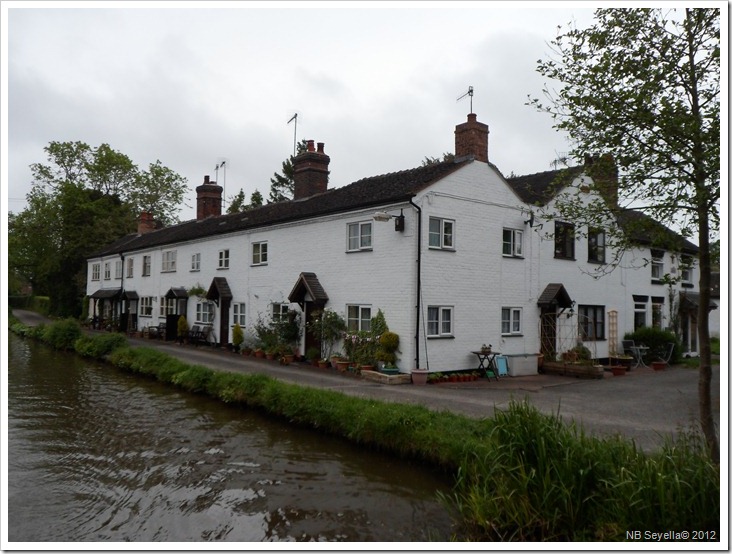 And “The Boat Yard” 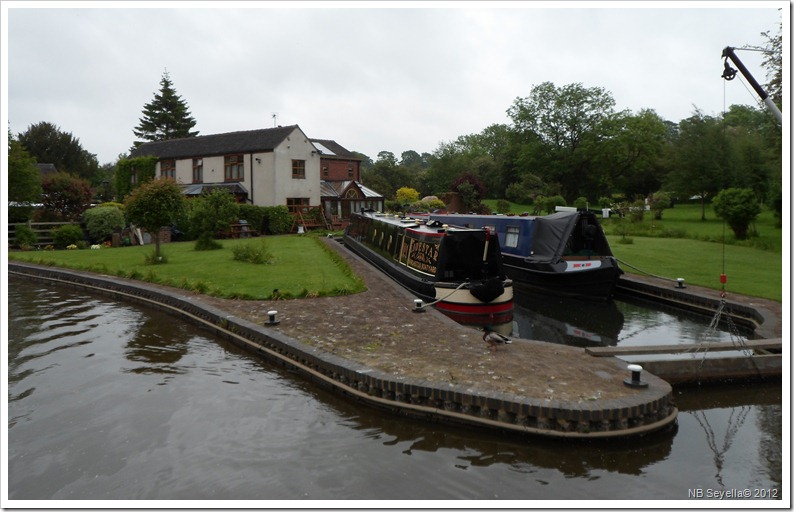 Now that is smart!

The canal and railway run side by side as we drop down in the Trent Valley, in fact it’s pretty much a constant presence till Lichfield. Above Meaford Locks a bridge carried the spur line in to the large Meaford Power Station, operating from 1947 to 1990. There’s very little to show that it was ever there, now.

Past the site of the power station, the Stoke to Lichfield railway on the left. 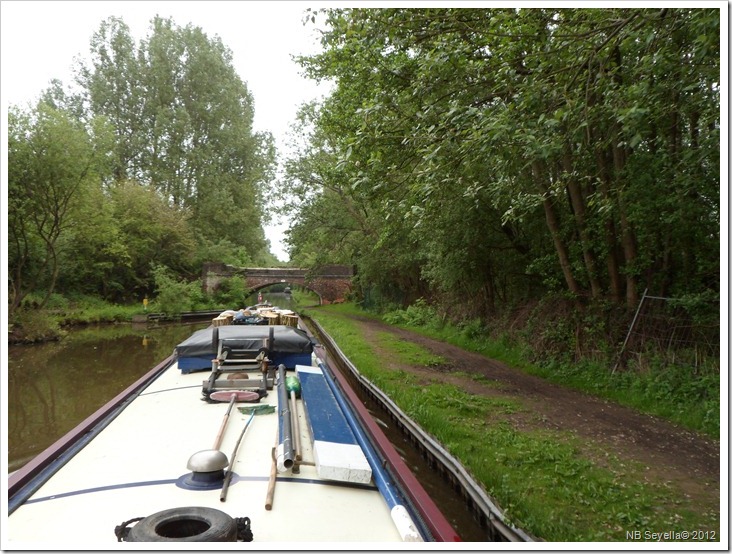 We joined another queue at the top of Meaford Locks. Two boats were ahead of us, waiting for a third to drop down the top lock. When our turn came a boat was heading up, so we brought them up first. Dropping down the four Meaford Locks 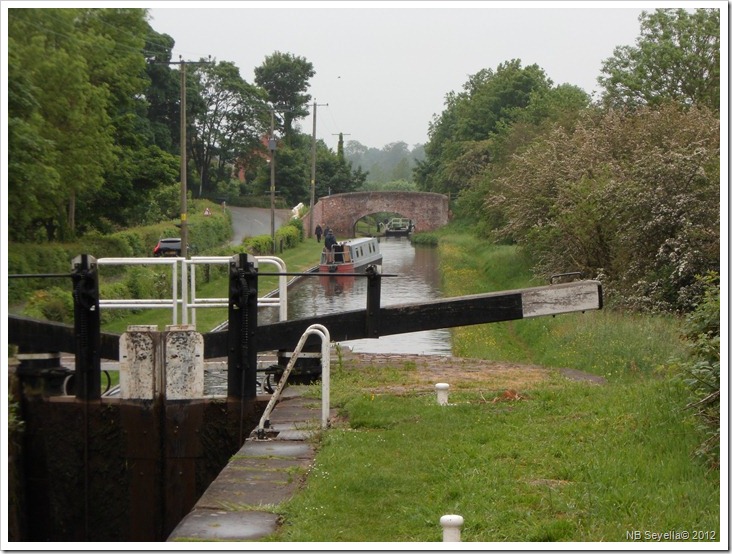 At the bottom, just outside of Stone. 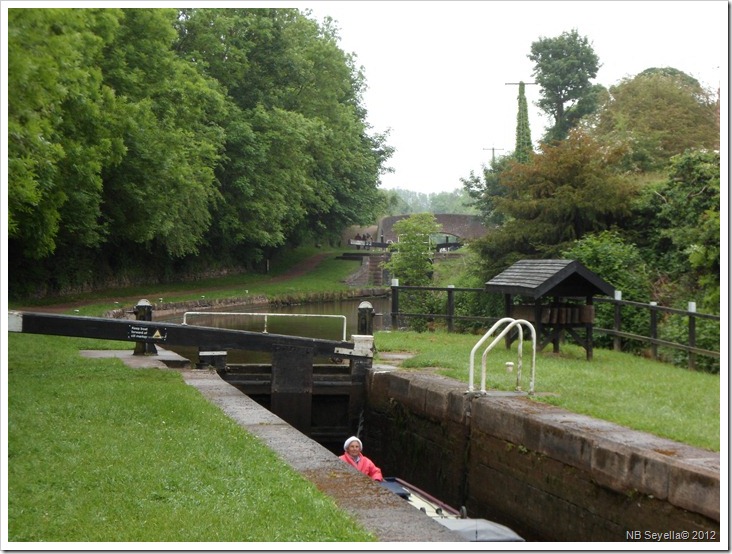 We’d met another couple of boats in the last two locks, so didn’t have to fill them for ourselves.

We motored into Stone, mooring on the 5 day visitor moorings above Lime Kiln Lock. Experience tells us that the more popular moorings nearer to the town centre and below Star Lock are likely to be full.

The beady-eyed amongst you may have noticed the Union Flag on the front of the cratch board. There’s another on the swan’s neck (tiller post) at the stern. This is our gesture of recognition of the Diamond Jubilee. I know that strictly speaking we’re not supposed to fly the Union Flag on a boat, it should be the Red Ensign, but this is a special occasion, isn’t it?

“Back in the 17th Century, wily seamen were using the flag to avoid paying harbour duties - a privilege restricted to naval ships at the time. So James' successor, Charles I, ordered it be restricted to His Majesty's ships "upon pain of Our high displeasure".
Those restrictions remain, and today it is a criminal offence to fly the union jack from a boat. “

We’ll stay in Stone for a couple of days, there’re are things going on over the weekend.