Today was always going to be a long one; up from Red Bull, through Harecastle Tunnel and back down through the potteries to Barlaston. But with the Bankilee Holiday looming there were more boats about than I’d reckoned on.

We were in the last uphill lock by 08:30, leaving just as two boats came out under the bridge from the Hardings Wood Branch.

Lock 41 and the Canal Tavern. 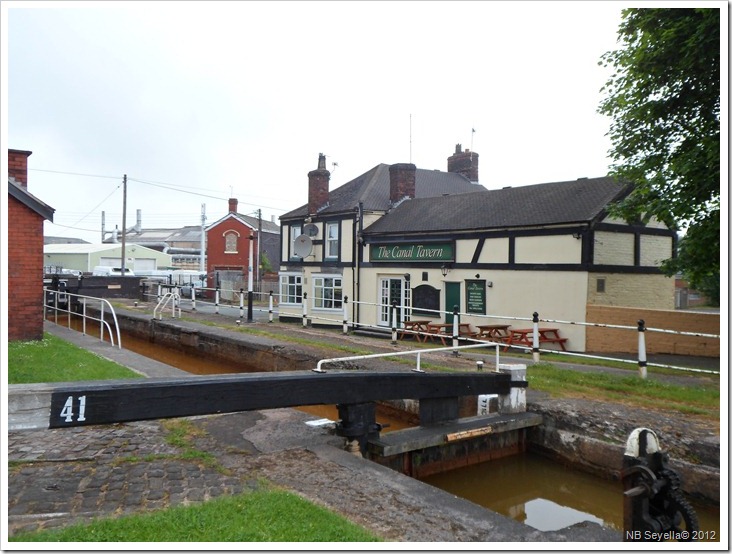 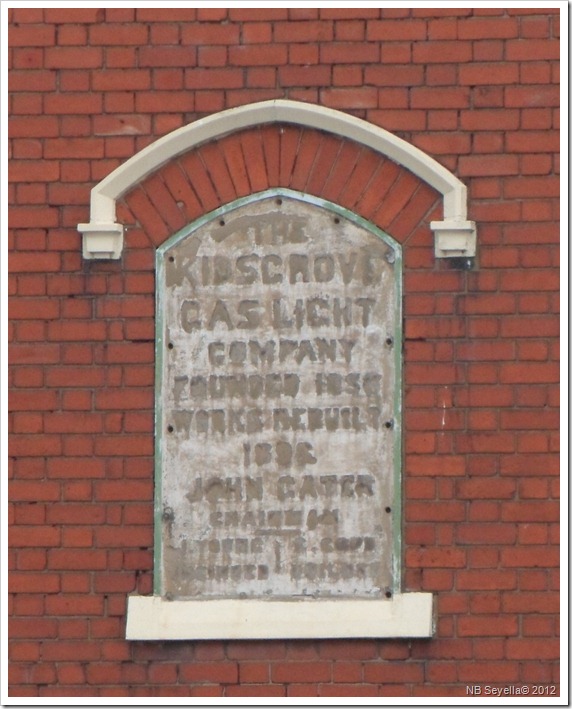 NB Alton swings out from under the junction bridge

We were third in a convoy of four to go through the tunnel, but unfortunately I’d miscalculated again. The tunnel opens at 08:00, not 08:30 like I thought. A group of boats had already headed southbound, and there was another four waiting to come north, so we had around an hour to kill before we could enter the 2926 yard excavation under Harecastle Hill.

The pause did give me a chance to clear the prop of rubbish, then have a mooch about with the camera.

Queuing for the tunnel 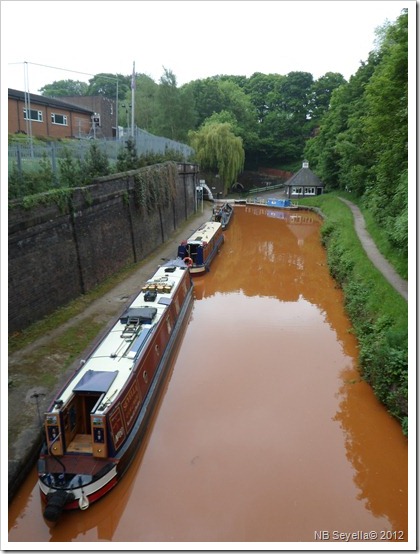 James Brindley’s original tunnel, opened in 1777 after 11 years of toil. 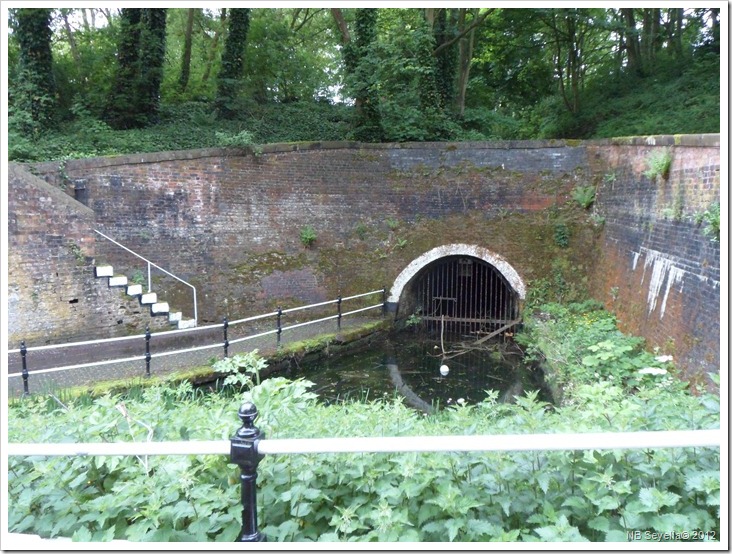 Thomas Telford was commissioned to build a new one as the earlier tunnel was suffering from low headroom due to subsidence. Better engineering techniques and being able to use the existing tunnel to remove spoil saw this bore completed after less than 3 years, opening in 1827.
But this too suffered from settlement, the towpath sinking below water level and headroom reducing. An electric tug system was introduced in 1914  hauling a train of boats through to avoid having to use the waterlogged towpath. This service was discontinued in the 1950’s when the current extraction fan system was installed. The tunnel was built without ventilation shafts and would have been potentially lethal for crews of powered boats without forced extraction of foul air.
The towpath was removed to give more width to the passage, but there are still  several abrupt changes in the ceiling profile to watch out for.

Looking back to the lay-by from above the earlier tunnel. 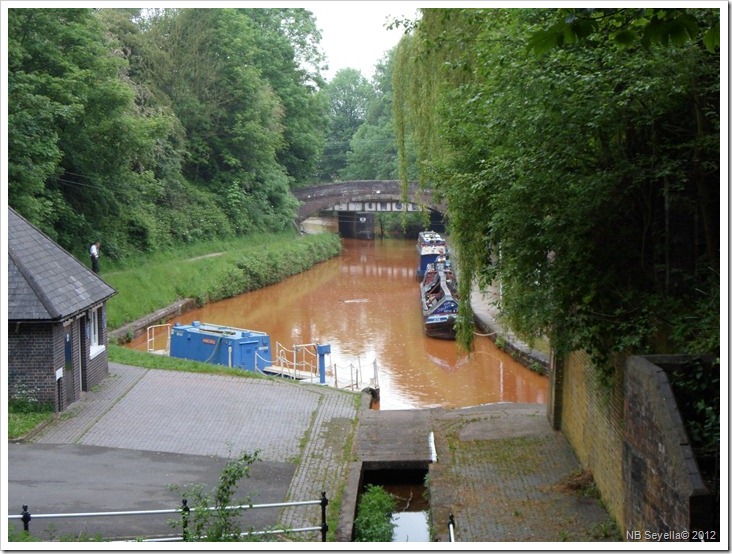 The entrance channel ran under the paved area in front of the tunnel keepers hut. The narrow culvert below centre is merely for drainage.

NB Water Lily, the first of the northbound convoy, arrives at half past nine. 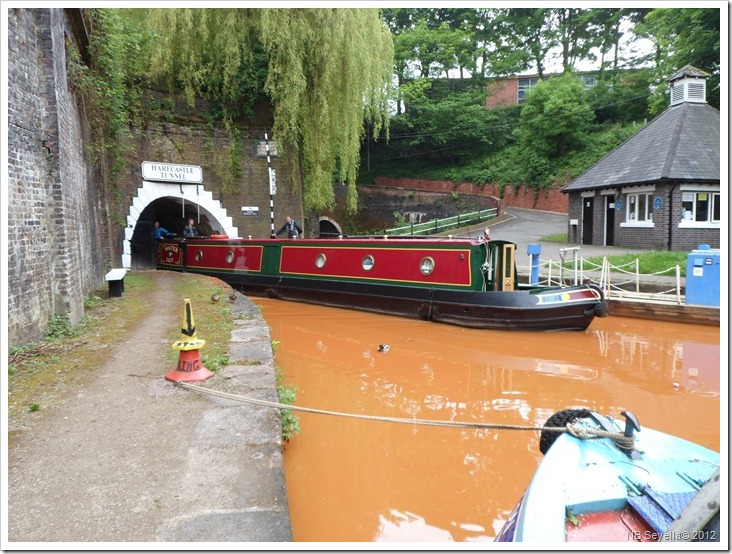 Following the convoy into the gloom 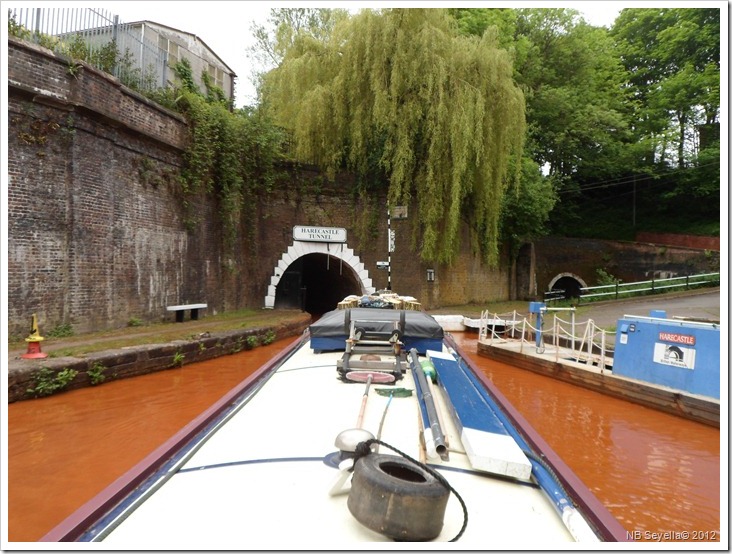 It’s an awkward turn in, the entrance to the older one would have been easier to negotiate!

I took a few pictures as we went through….

Passing places in the walls allowed pedestrians to get out of the way of boat horses. 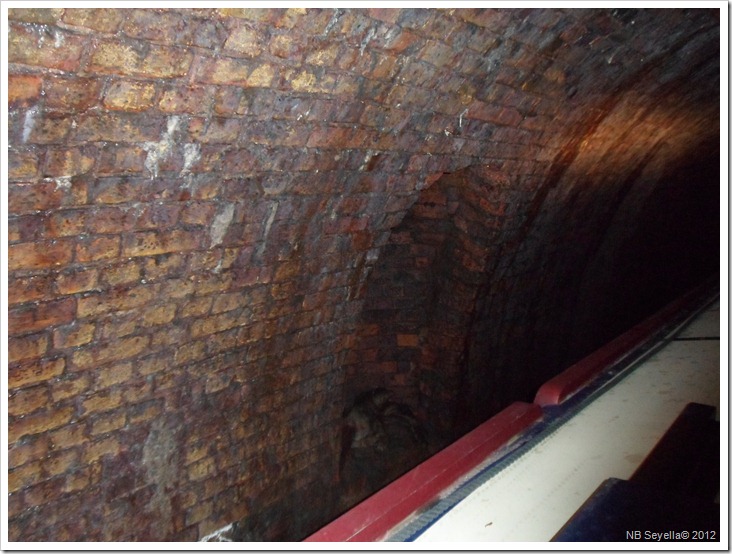 Changes in profile are highlighted…. 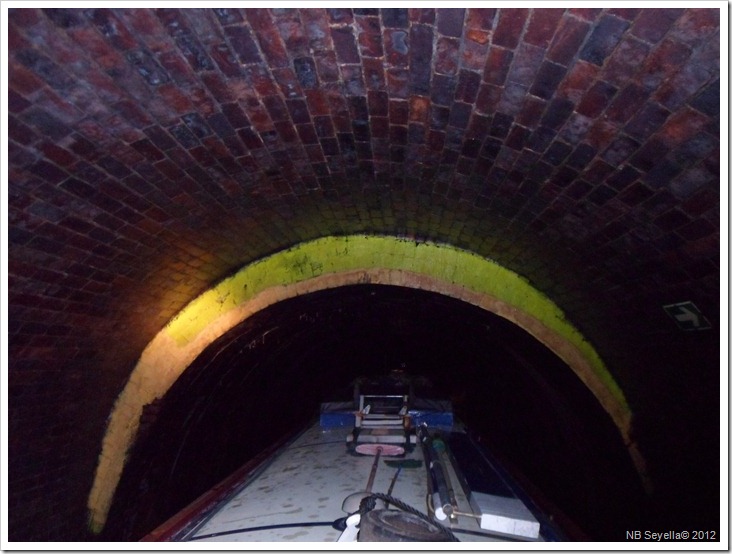 …which is just as well! 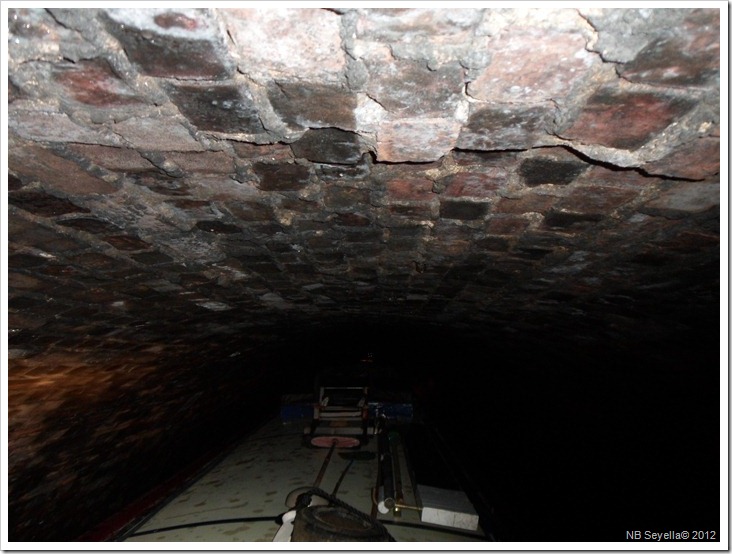 Moisture seeps continually through the brickwork from the hill above, forming stalactites and flowstone curtains as the solids separate out.

Some are brilliant white…. 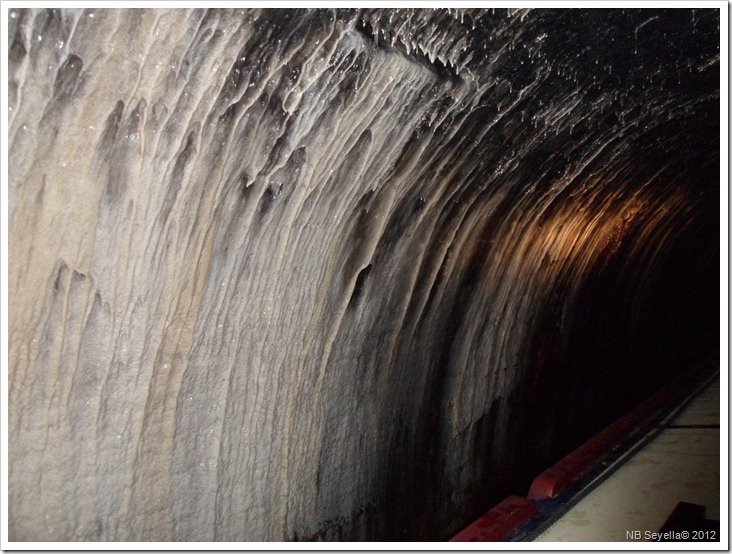 ….and some are stained with iron. 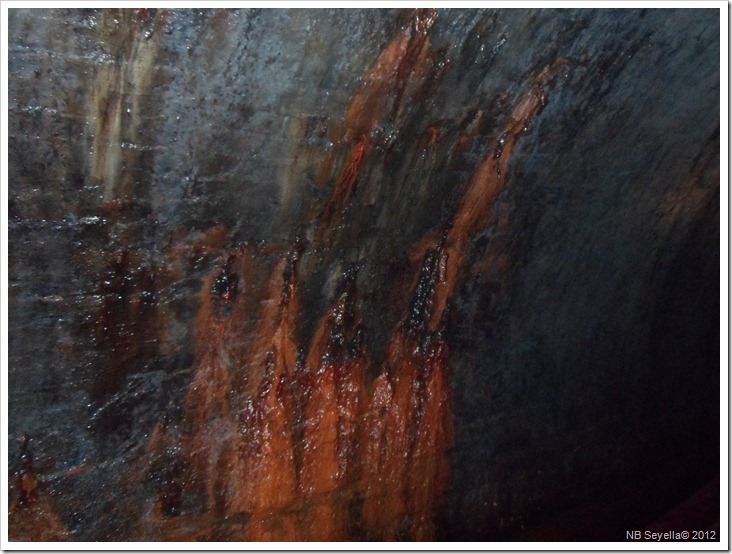 Straw stalactites hang from the ceiling. 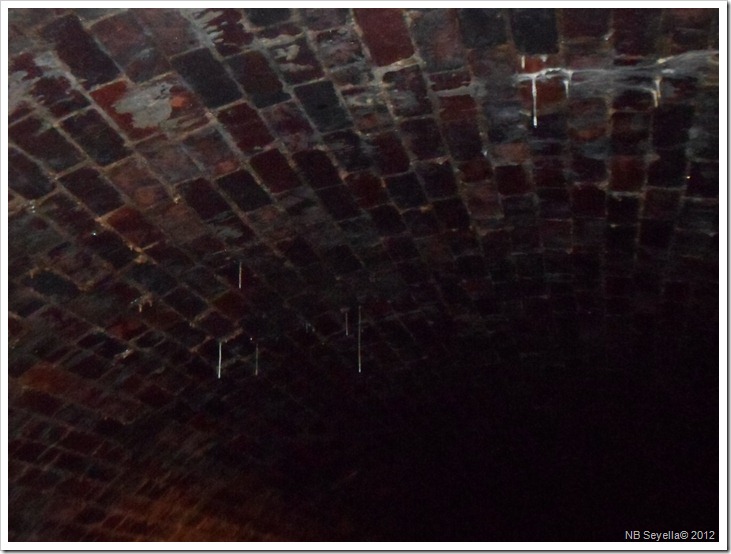 Distance markers tiles were set into the walls, but have been backed up by painted numbers. 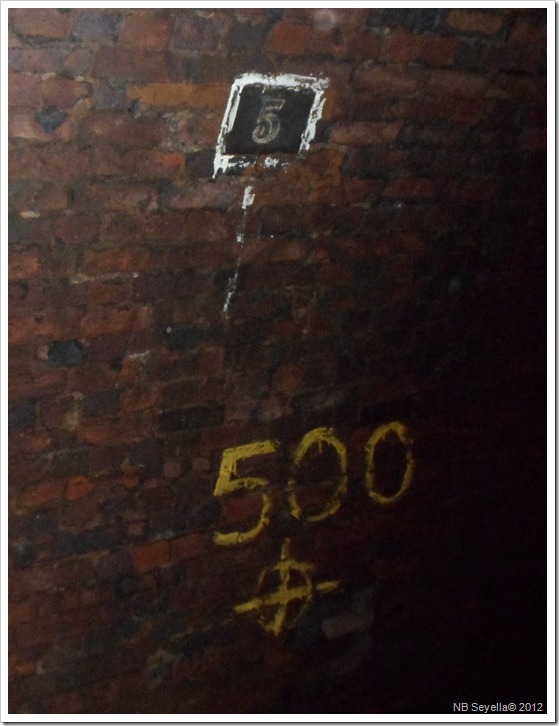 After about 35 minutes we emerged once more into daylight. 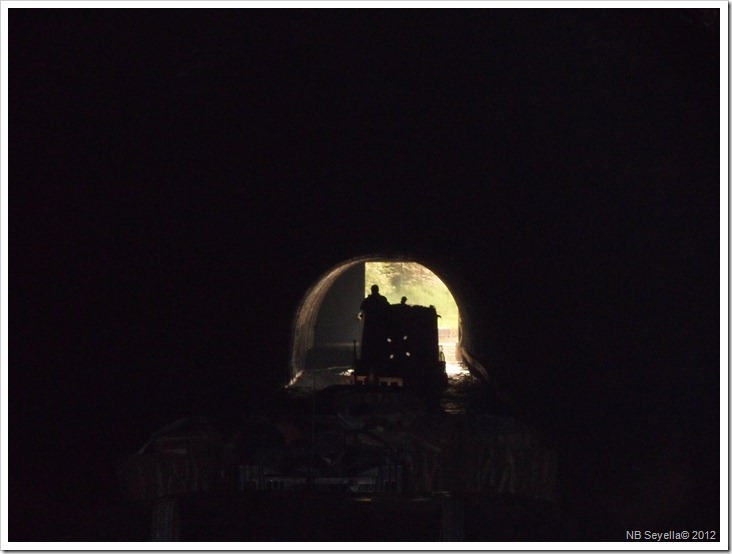 I’d told Brian and Ann-Marie on Alton that I was after diesel, so they pulled over just out of the tunnel for us to come alongside. Topped up at 87p per litre, we set off again through the remains of the pottery industry in Longport and Middleport.

Leaving the tunnel after filling the diesel tank. 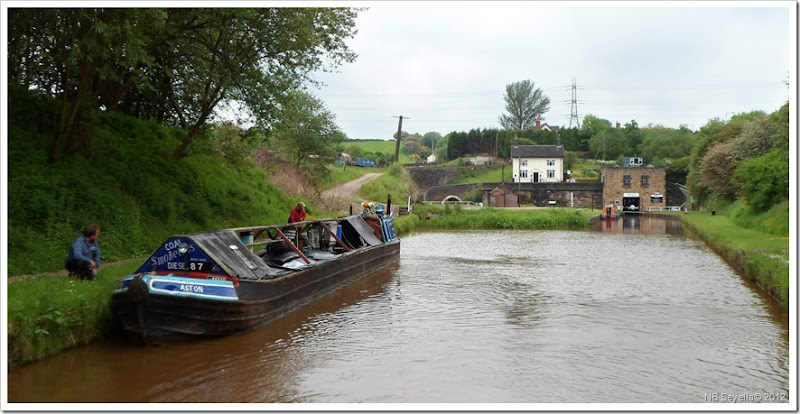 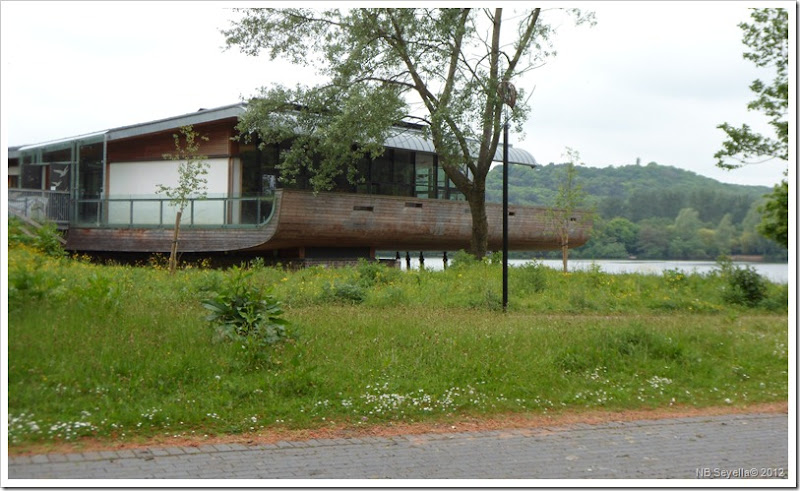 Decaying factory buildings in Longport, but one of the few surviving bottle kilns. 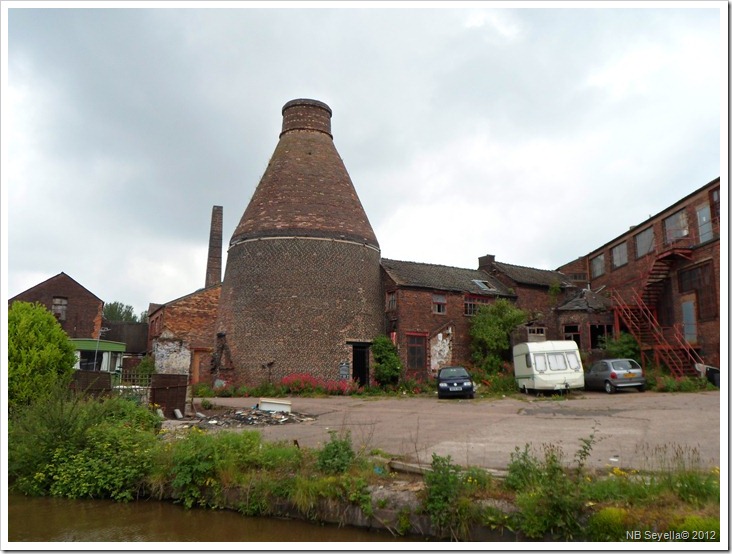 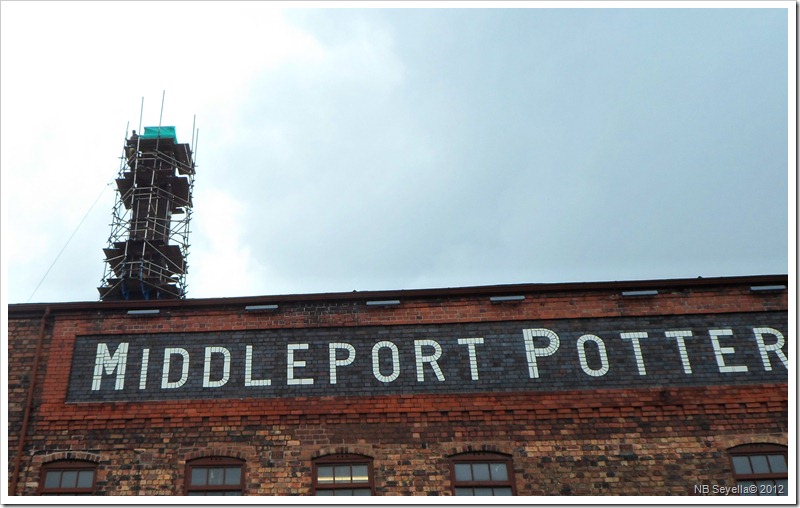 There’s a hiatus between Middleport and Stoke, a wasteland of scrub where the huge Shelton Ironworks once stood. Here also was the entrance to the Burslem Branch Canal, leading to wharves, warehousing and boatbuilders at the edge of the town. Burslem was considered the most important of the “Five Towns”, and the ½-mile canal was built in 1805 to service it’s needs.

There was a major breach in December 1961, causing the branch to close and it has since been filled in. However, there’s a scheme afoot to reopen the line as a regeneration project.


The quiet pause ends on the arrival at Etruria and the junction with the Caldon Canal. It was always going to be busy here, with the canal festival this weekend, but I was disappointed to see three boats in front of us waiting to go down the deep Etruria Lock, the first on the canal’s downhill journey to Shardlow. 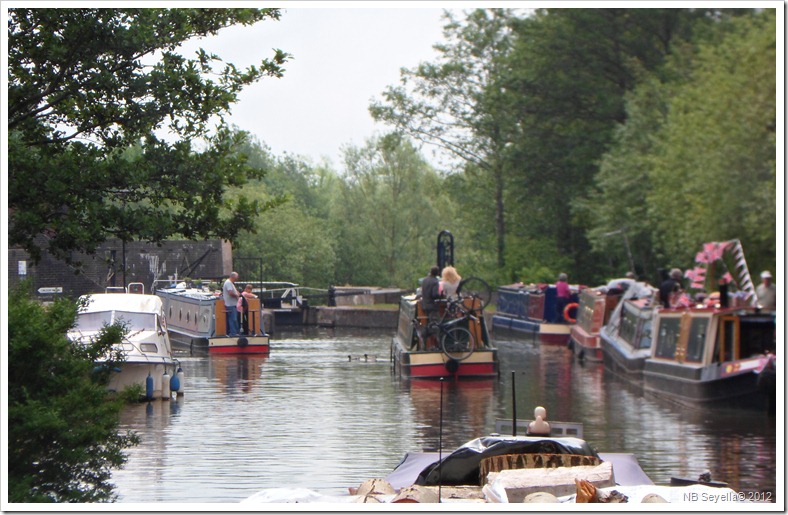 We got there in the end, dropping down the first two locks to pass the Etruscan Bone and Flint Mill, now a museum. 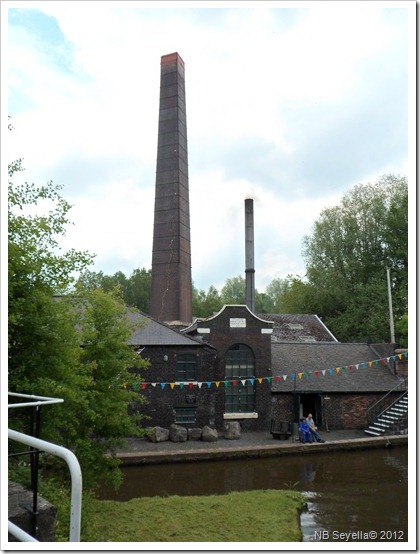 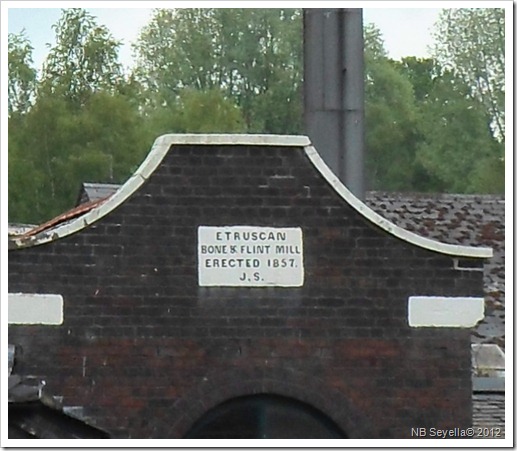 Three more locks drop the canal down and out of the built up area, the last one being a concrete monstrosity with steel gates and very slow to fill and empty. 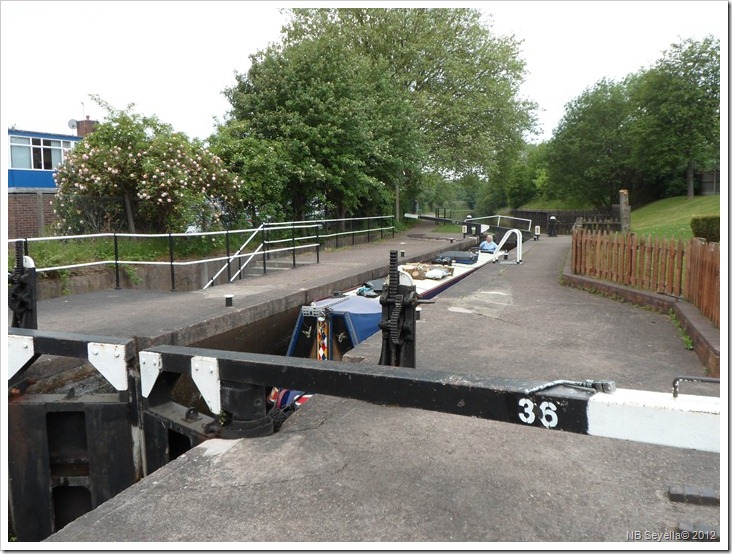 The lock was rebuilt during road improvements in the 1970’s. It’s a pity they didn’t consult a canal engineer….

There’s four miles of fairly open country to Trentham, with odd reminders of past industry, before we got to the last lock for today.

A significant landmark, the Hanford Waste Incinerator sits beside the canal and the A50. Burning householder waste it generates electricity for the National Grid. 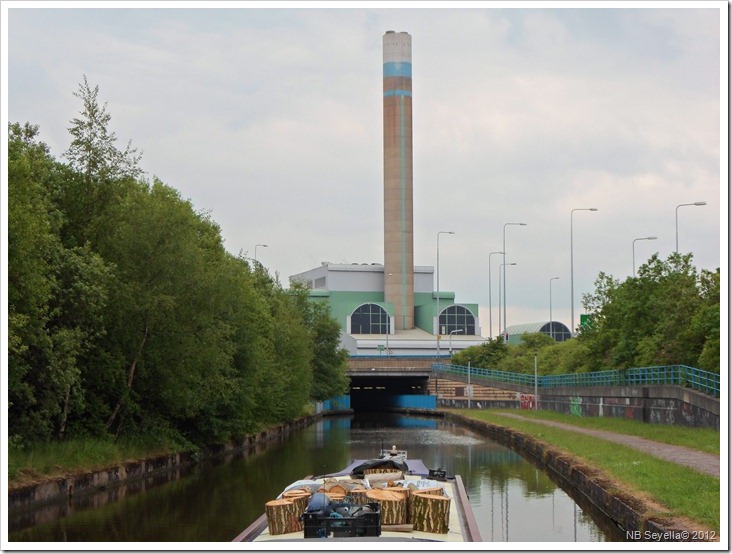 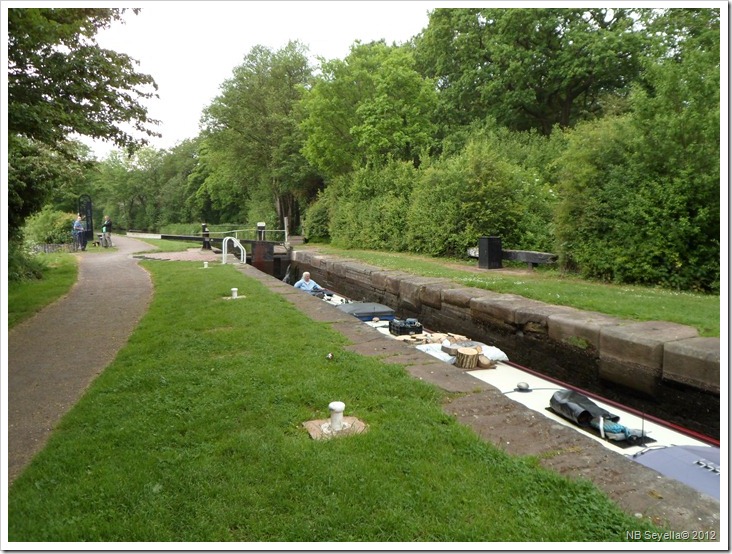 We’d been told to look out for several work boats coming up the locks, heading for Etruria for the weekend. The first pair were NB Sweden towing NB Skylark as we headed towards Trentham. 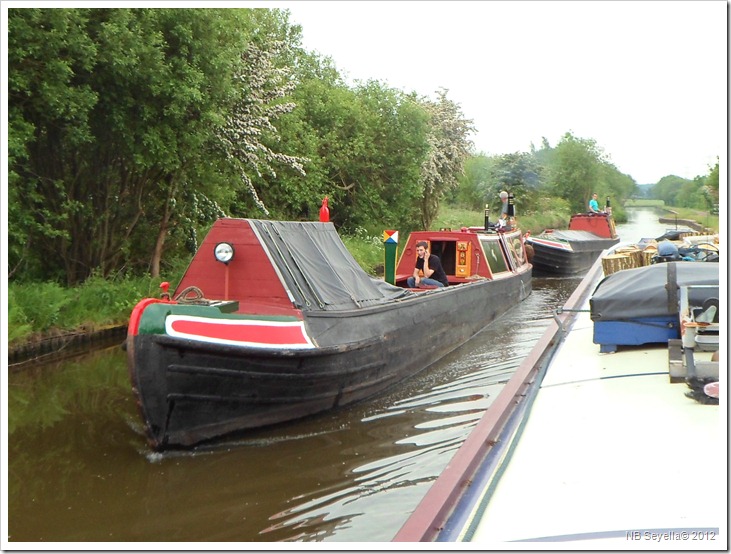 Sweden is in Anderton Carrying Company livery, Skylark is an ex- WH Cowburn and Cowpar boat. Both are motors, I wonder if Skylark has a problem?

The next pair, motor and butty this time, took Trentham Lock as we left it. 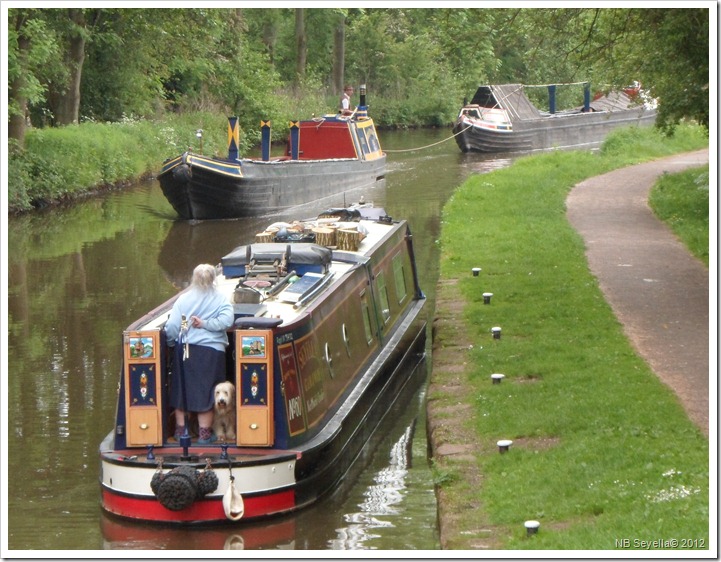 As these are narrow locks (one boat width), Ibex had to drop the tow and allow Ilford to drift into the bank.

Ibex into the lock, Ilford drifts 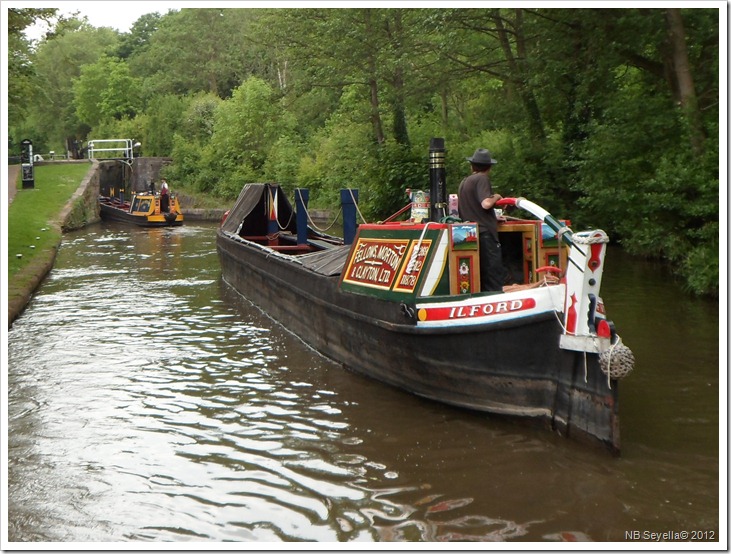 There’s a boat waiting to come down, after which Ilford will be bowhauled into the lock.

We pulled in after Bridge 104, beyond the Wedgwood Pottery factory, at just before 4 o’clock. It’s felt like a long day, but taking into account the two hours “waiting” time, we didn’t do too badly, actually under way for 5½ hours.