Well the forecast got that bit right, what they didn’t was the timing. Heavy showers moving in after 13:00, that was the prediction, so we got off at around 09:45, planning to be done and dusted before the rain arrived.
No chance, Somerton Deep Lock was only 15 minutes away and that’s where we got our first dousing. 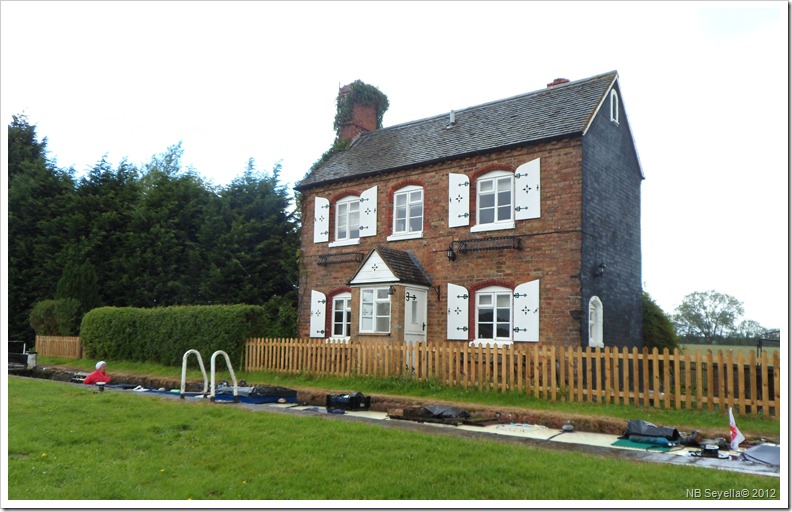 It is deep, as well. Twelve feet in fact. 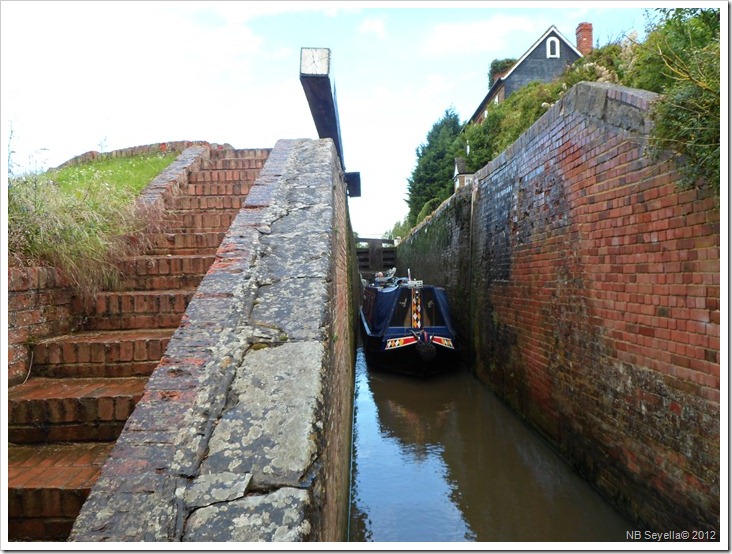 I mentioned yesterday that these single bottom gates were heavy to swing. Well this one I found almost impossible to close, especially with the recent shower making the footing slippery. I finished up with a rope around the end of the balance beam and back across my shoulders, so I could pull from a position of my choosing.

The brisk breeze kept blowing the clouds along, moving areas of sunlight and shade across the fields. 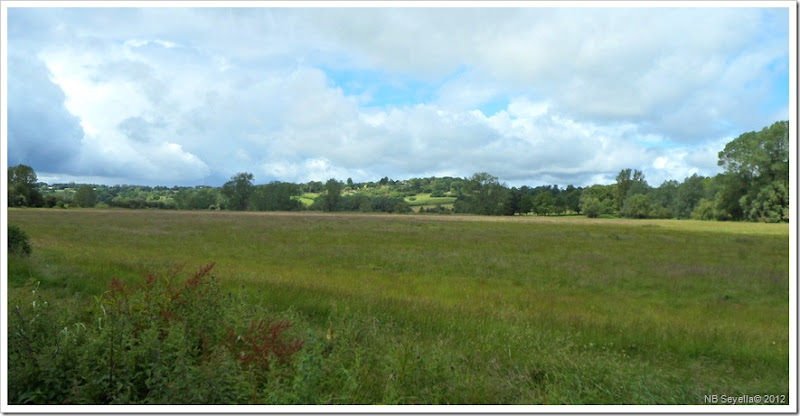 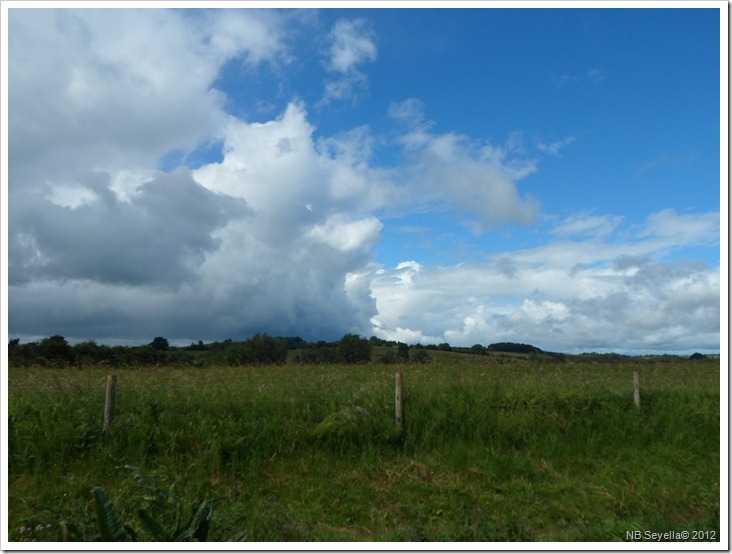 Around Upper Heyford there was a row of pollarded willows on the bank, looking like those Troll dolls you could get in the 70’s. 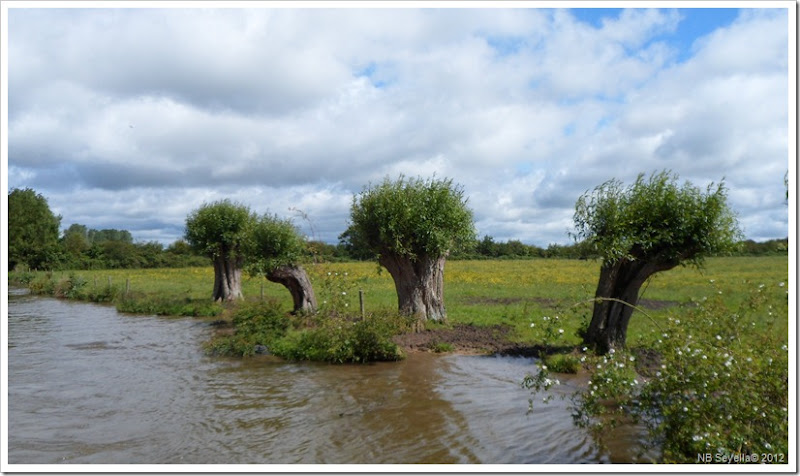 Pollarding involves cutting back the larger branches which encourages lots of thin, whippy branches to grow. These are used in basket and hurdle making.

Allen’s Lock is close to the village of Upper Heyford and is popular for a Sunday afternoon visit. 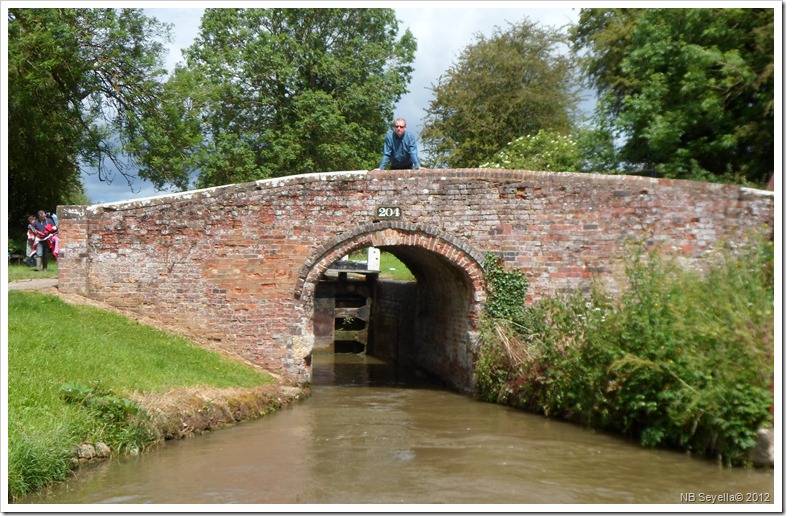 Lower Heyford, a little further down the canal, is another busy spot. Moored boats, a lift bridge, the river and a boatyard all combine to make it a spectators paradise. And there’s a railway station to bring them… 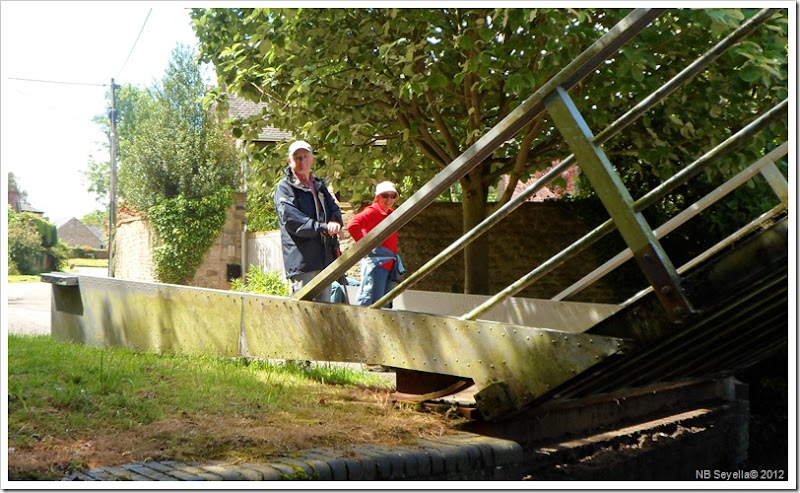 A bit tight for space. 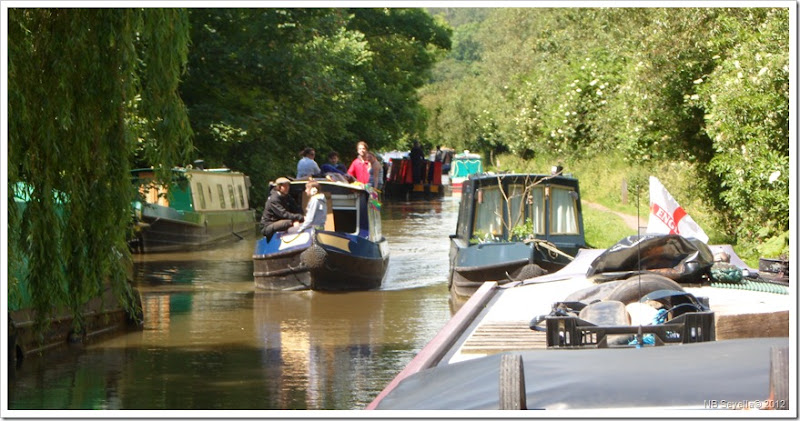 Oxfordshire Narrowboats hire base at the wharf 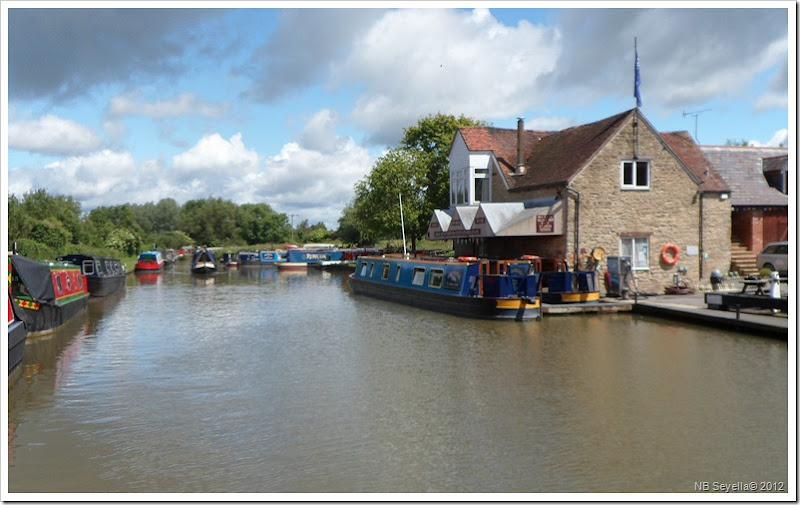 We were following a day-boat, Jolly Boatman, from the hire base. They’d been up the canal a distance, and now were having a look southward. A little nervous, the steerer dived for the towpath each time a boat came the other way, and didn’t move up from tick-over even when we’d passed the moorings. I had to keep dropping out of gear to stay behind, so was pleased when he agreed to my asking if we could pass.
George, steering Rock’n’Roll, was also able to go past soon after.

We had a bit of a hold-up at Dashwood Lock, a boat was waiting to go down and the crew was struggling to wind paddles and open gates while holding umbrellas against the driving rain as another heavy shower swept over.

R’n’R took lead position again here, and we got to the pretty Northbrook Lock to see George chasing about, closing the bottom gates after Carol then dashing back to draw the paddles at the top for us.

George closing up after R’n’R, just before trotting back to start the lock for us. What a star. 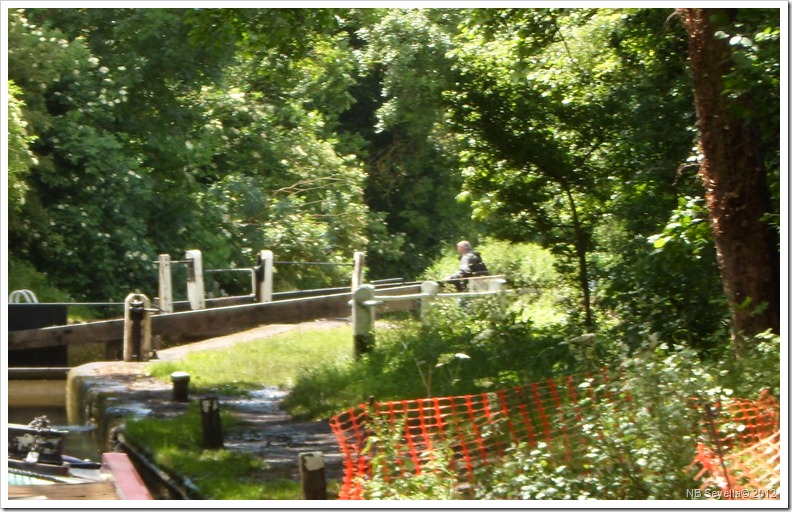 This lock is set in a delightful wooded stretch, full of birdsong this afternoon, with damsel flies flitting in and out of the shafts of sunlight. 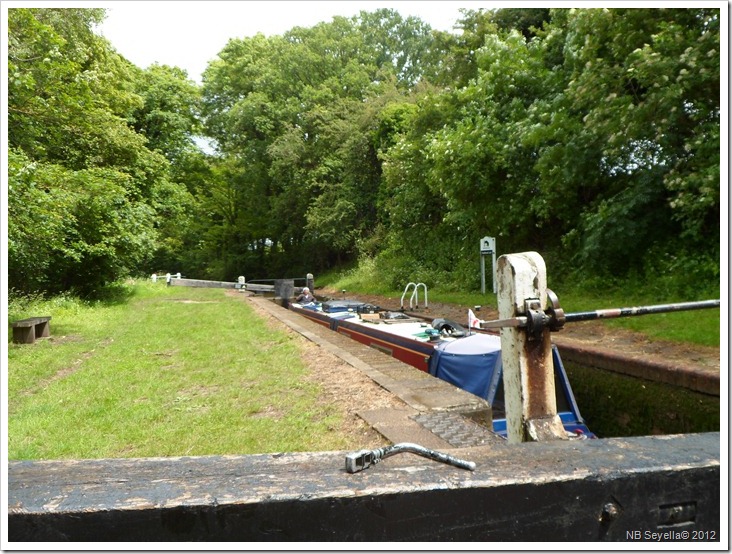 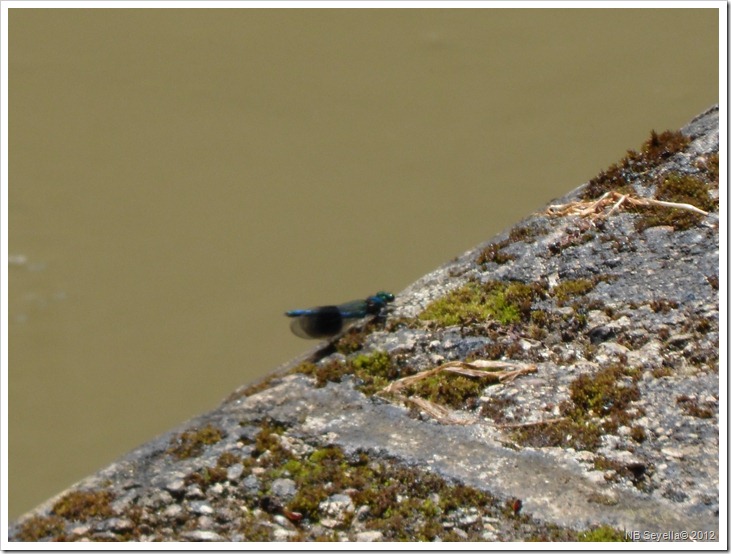 The next couple of miles run through overhanging trees, narrow with reedy edges and an overgrown towpath. You could be forgiven for thinking that you were on a river.

Beautiful wooded length with the River Cherwell alongside. 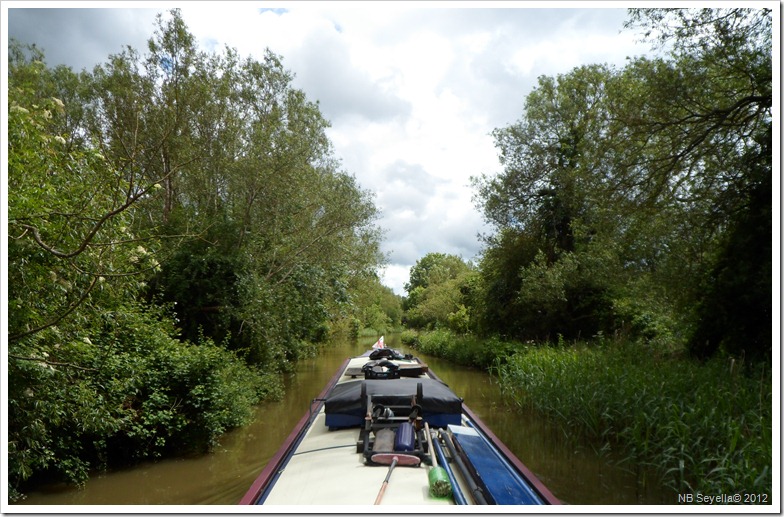 We moored up partway along here, a mile or so above Pigeon Lock.

Moored in the woods 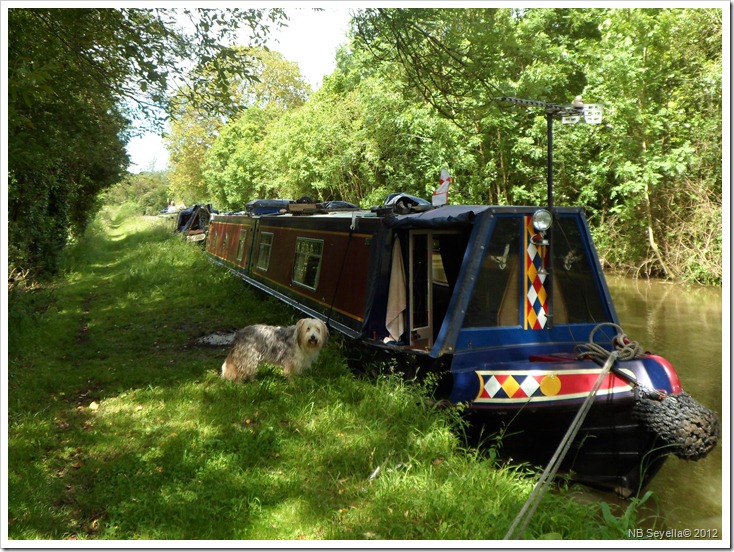 All being well our mail should be at the Post Office in Kirtlington so I can pick that up and some shopping tomorrow.

Just off the towpath above the river there was a stack of branches trimmed off the trees. So I got out my trusty bow-saw.

Well, you just have to, don’t you? 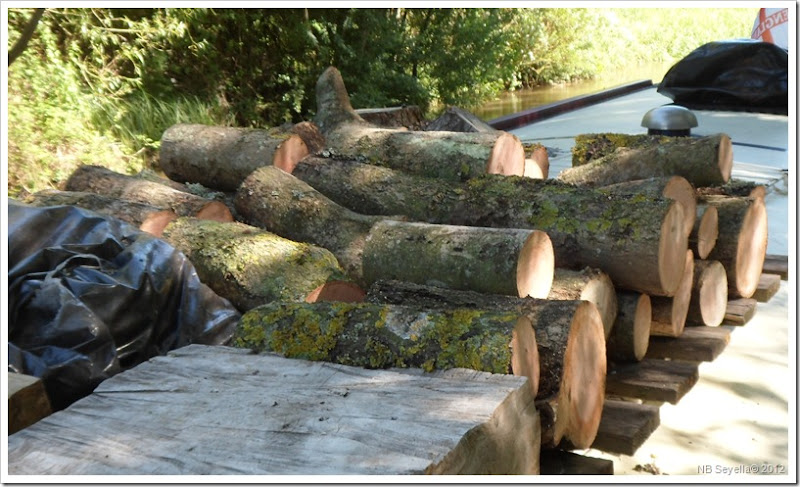