Cool, but at least it stayed dry.

It was a pleasant surprise to get up this morning to a dry day. There had been rain overnight but it had cleared through.
It was about 08:45 when we got away, through All Oaks Wood which does seem to have a lot of oak trees, but by no means all of them. 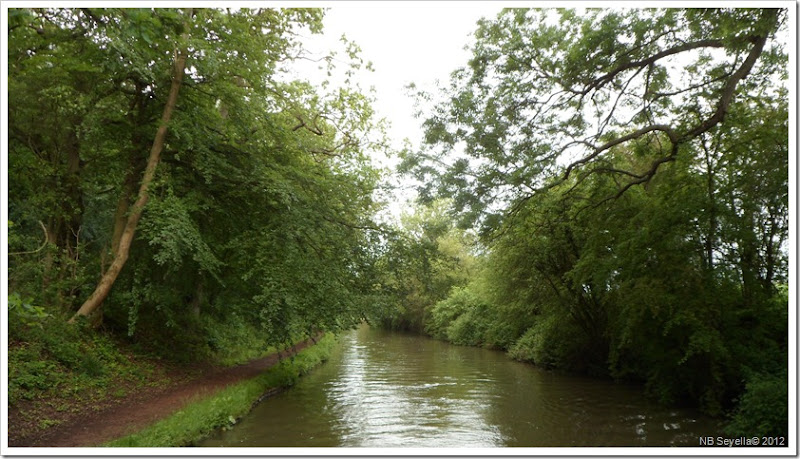 Alongside Bridge 35 is a row of canalside cottages, once occupied by The Boat Inn

No beer now at Bridge 35 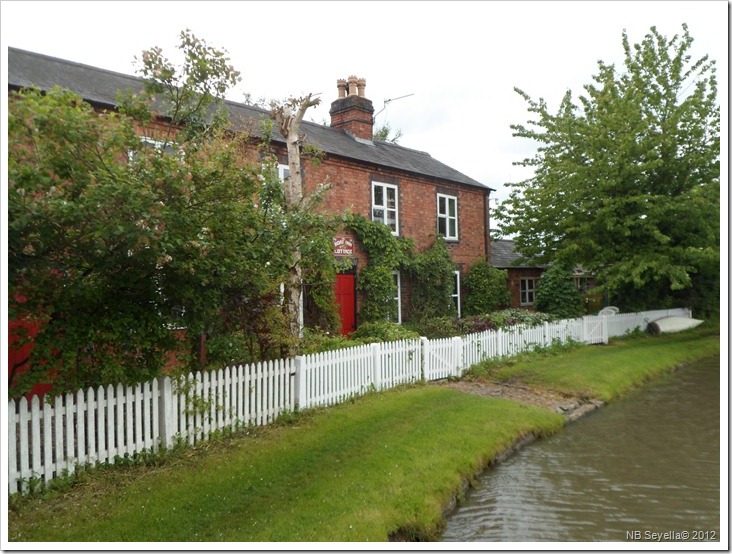 The  91 mile long Oxford Canal was authorised by an Act of Parliament in 1769 and James Brindley was appointed Chief Engineer. He surveyed a route for a contour canal, avoiding the ups and downs of the topography of the countryside.
This method of construction was Brindley’s trademark; it limited the number of locks required, and avoided costly cuttings and embankments as much as possible. The downside, however, is that the route wound extravagantly across the landscape, clinging desperately to one level.
This wasn’t a problem initially, when it formed the only viable link between the coalfields of Bedworth and the southern towns of Banbury and Oxford. But under threat from more modern north-south routes like the Birmingham and Liverpool Junction Canal (now Shropshire Union) and the Grand Junction Canal (Grand Union) the course had to be streamlined and through the 1820’s embankments, cuttings and aqueducts were built to straighten the navigation. This costly endeavour succeeded, chopping 14 miles off the 36 miles between Braunston Turn and Hawkesbury and enabling the navigation to still sustain a profit well into the 20C.
Where the old route diverged from the new cast iron bridges from Horsley Ironworks in Birmingham carried the towpath over the abandoned lengths. The loops soon became weed filled and silted up, but short stubs from the main channel are still in use.
There’s an excellent map here showing the current and earlier lines

Bridge 39 carries the towpath over the entrance to Brinklow Marina…. 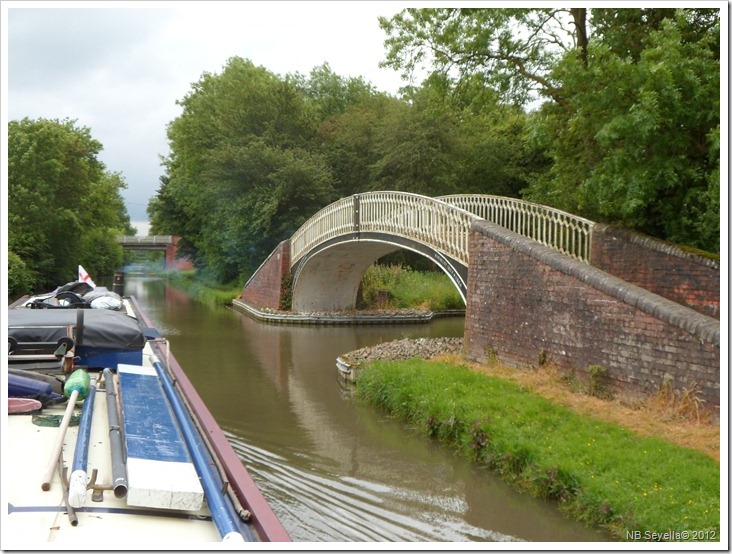 … and the loop reappears as Lime Farm Marina a mile further on. 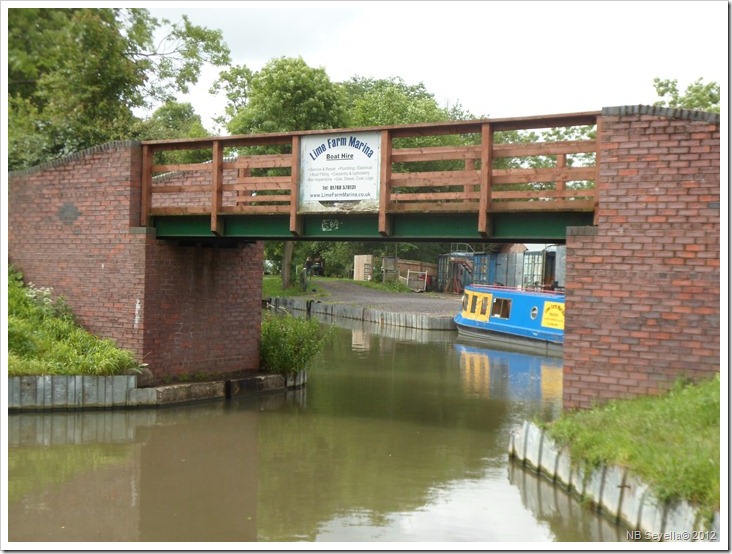 Another bridge near Cathiron locates another redundant loop. 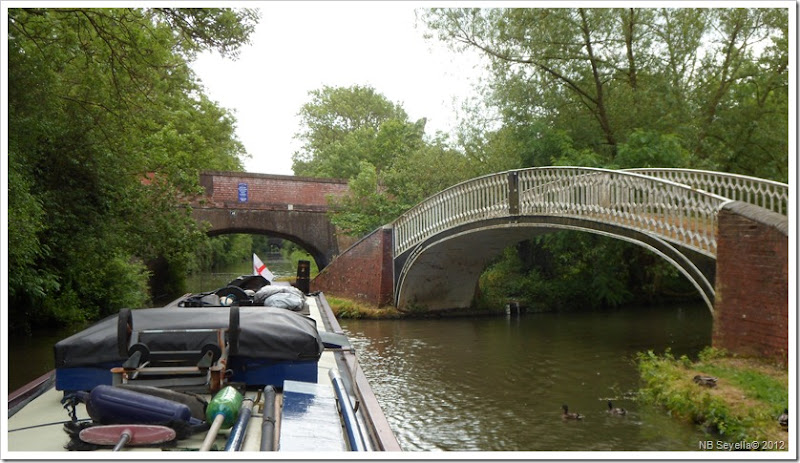 The missing bridge numbers would have been on spans on the old line.

Newbold on Avon is a handy stop if you don’t want to overnight in Rugby. Shops and pubs, and a 250 yard tunnel that is lit by coloured lamps shining up into the vault of the ceiling. 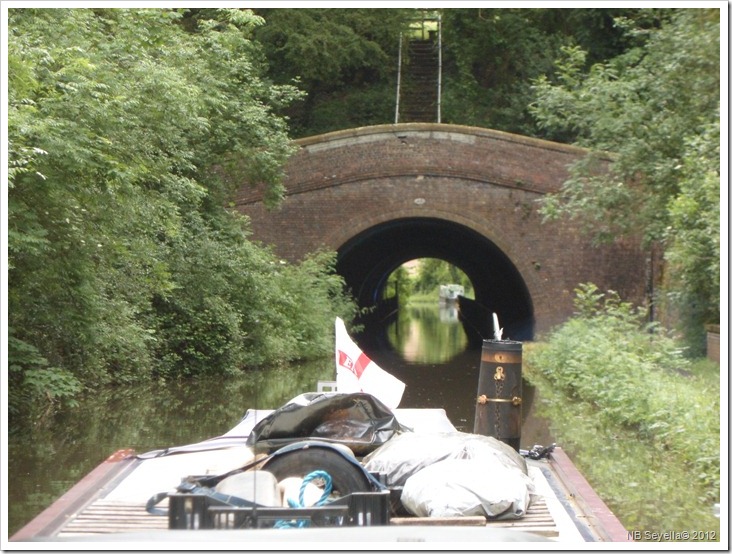 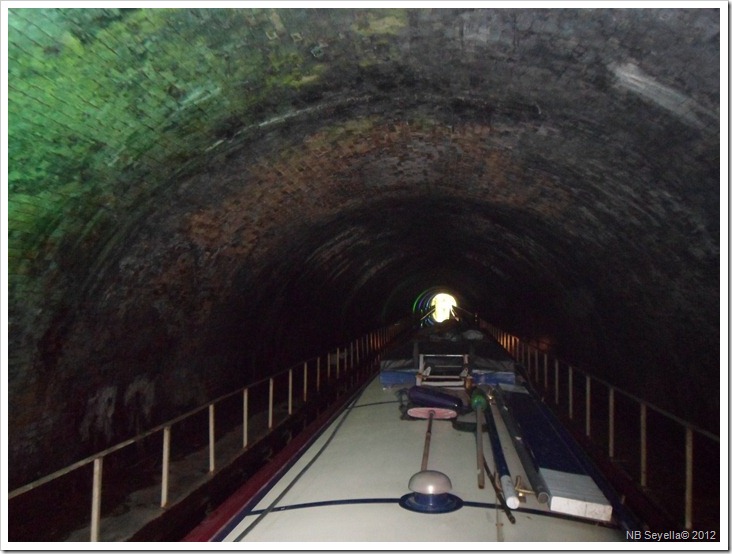 It’s more impressive if you move the camera! 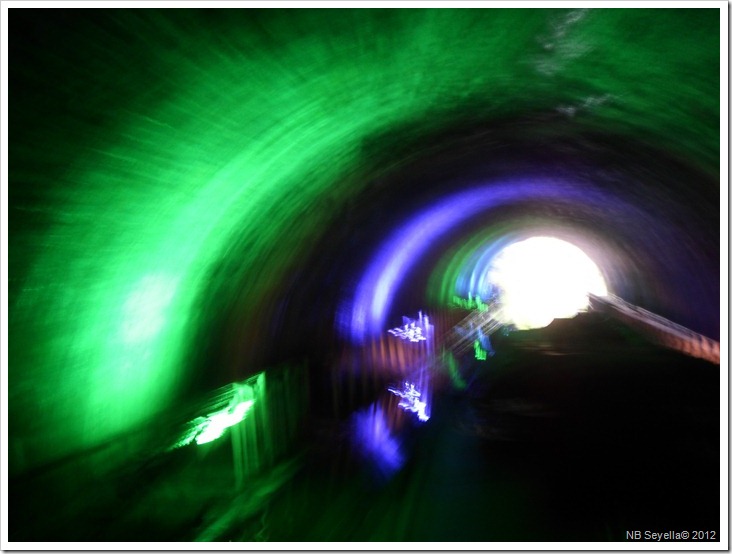 I’m sure it seemed a good idea at the time, but now a lot of the lamps have failed, somewhat diminishing the effect.

There’s another of those Horsley bridges across the entrance to Rugby Wharf. This marks the return of a loop than ran around the edge of Newbold Quarry, now a water park. 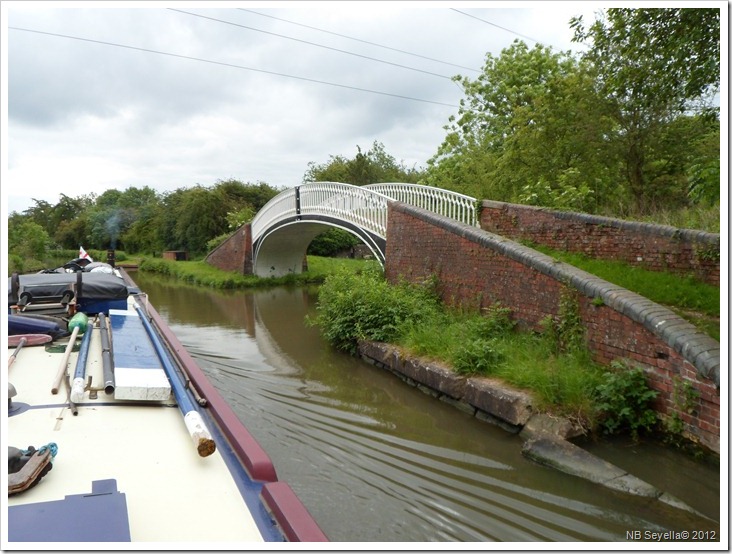 The short remaining length still in water leads to the base of Willow Wren, for boat hire, services and training. This has developed from a company formed in 1953 by three individuals keen on keeping commercial carrying on the canals. Robert Aickman, Leslie Morton and Vivian Bulkeley-Johnson managed to keep operating using second-hand boats until the harsh winter of 1963, when the partnership dissolved. Morton pressed on, forming a new company which hired boats to working boatmen but this too came to an end in 1970.

The company seems to have also branched out into holiday hire in the ‘60s, using converted working boats. The current company,  Willow Wren Hire Cruisers Ltd, was formed in 1964. It also runs the hire base at Hillmorton Locks, Grantham Boat Services.

Coming into Rugby the canal has to cross two obstacles. The first is a minor road, the second a minor river. It manages this on two aqueducts only yards apart. 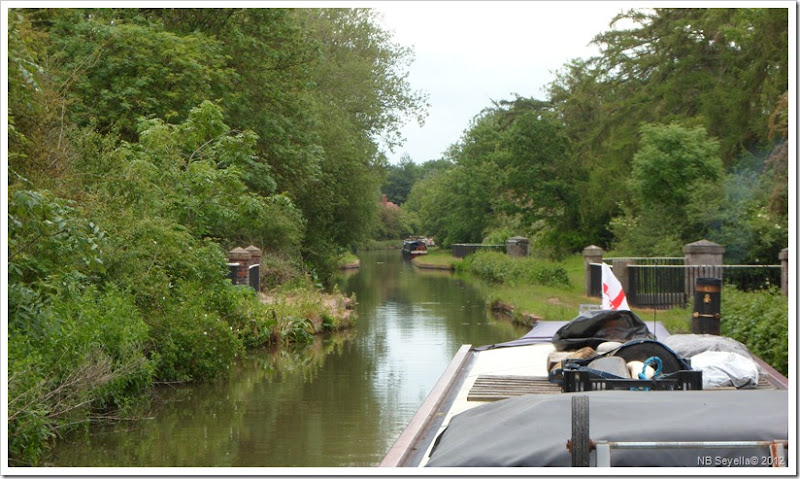 We pulled in just past Bridge 58, so I could top up the grocery cupboards from the handy Tesco and get some bits and pieces from Homebase. We were just getting ready to move off when Pete and Pat came along, NB Molly May II. We’ve not seen them for some time so had a chat to catch up.

We got going again at about one o’clock, heading out of town past Clifton Cruisers. 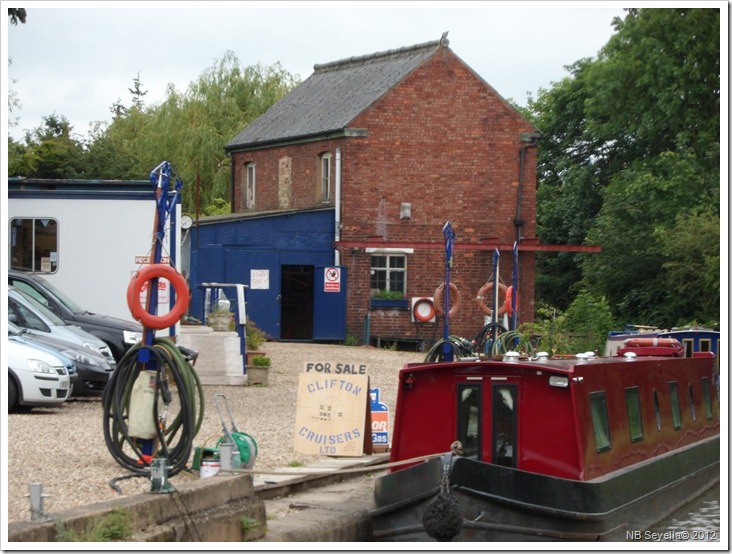 George, NB Rock’n’Roll who we’re meeting in Braunston, rang while we were in Rugby to let us know about hour long queues to go up Hillmorton Locks. We almost stopped near the golf course just past Clifton, to get an early start to the locks in the morning, but the weather was still fine and the afternoon still ahead, so we pushed on, prepared to wait if necessary.

Arriving at Hillmorton Bottom Locks – what, no queue! 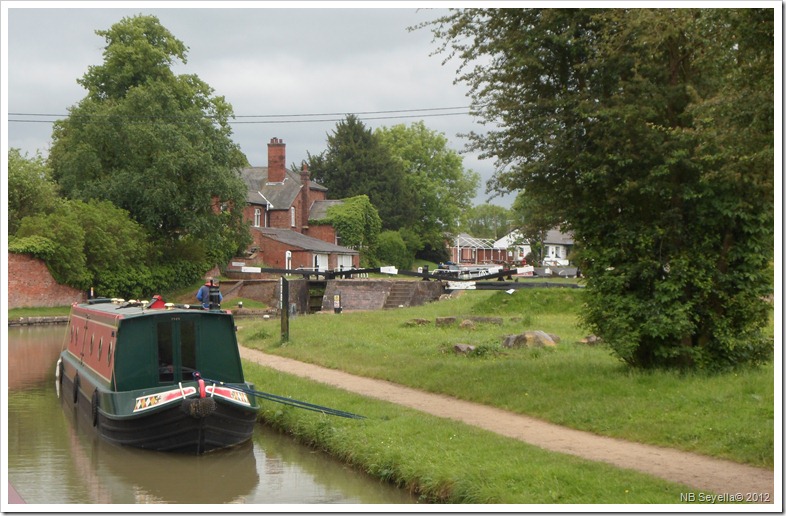 George’s tailback had cleared while we were shopping. Good stuff!

These are duplicated locks, two narrow chambers side by side so you can use either one. At the moment, in the interests of saving water (eh??) the offside locks are padlocked overnight, and a lock-keeper is on duty through the day to ensure efficient use of the flight. Only not today. The offside remained chained up and there was no-one on duty. Hence the queues on what is arguably one of the busiest sets of locks on the network.

The queue had migrated to the top of the locks, good for us but bad for those who’d waited for over two hours. We made an easy job of going up, boats coming down leaving the gates open and waiting crews eager to help keep things moving. Exiting the top lock I counted seven boats waiting and we encountered another couple in the next mile or so.

A pause to wait for the middle locks 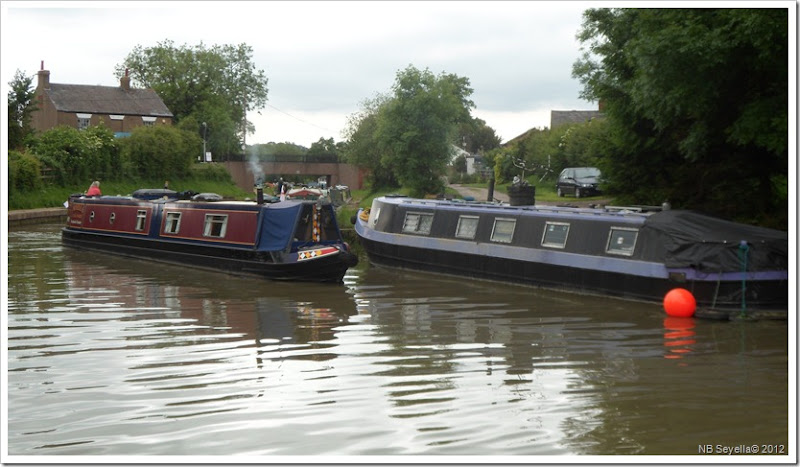 Someone’s got a project on…. 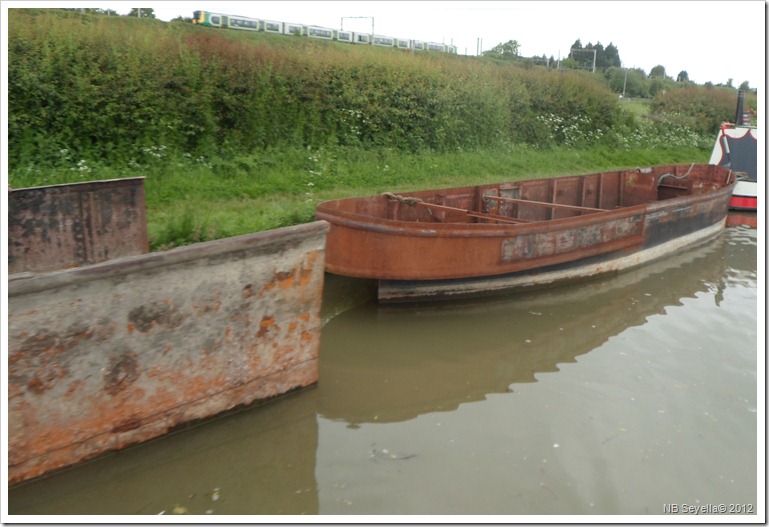 We swung round the right bend under a gaggle of bridges for rail and road, then the canal heads resolutely south and west towards Braunston.

Under the bridges near Hillmorton 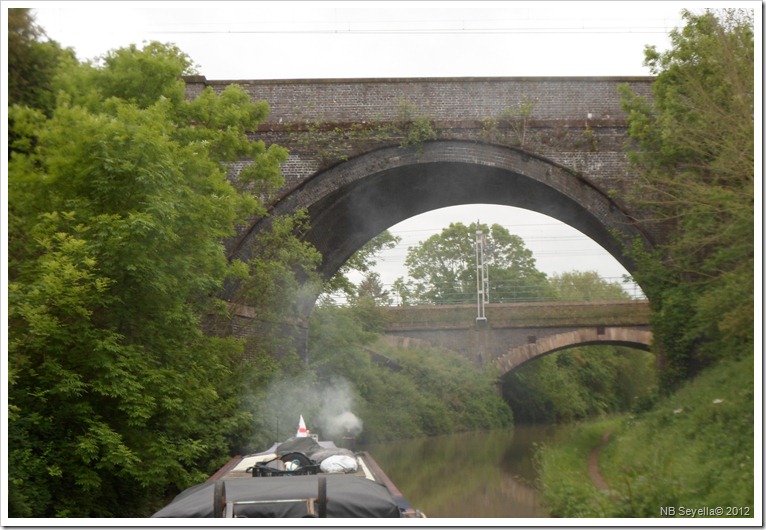 The landscape now is fairly level so there wasn’t much in the way of straightening needed. The Barby Straight is crossed by the M45 before the canal bends around the foot of Barby Hill. 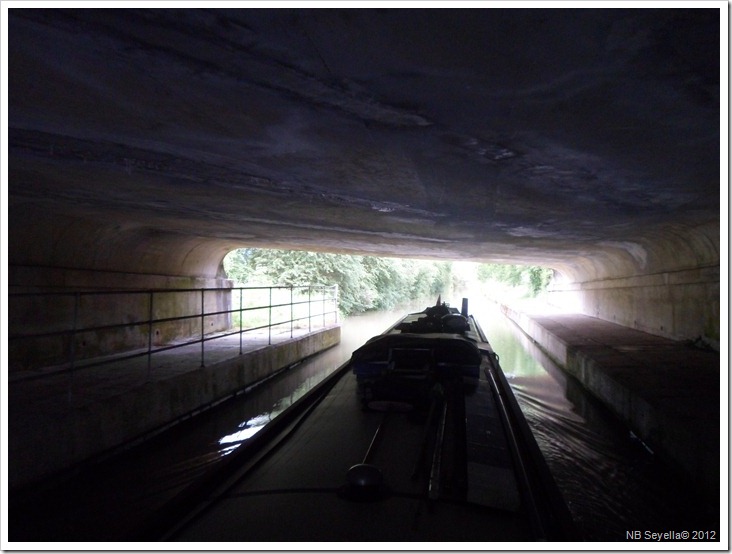 Bridge 80 is on a blind bend and has suffered for it. 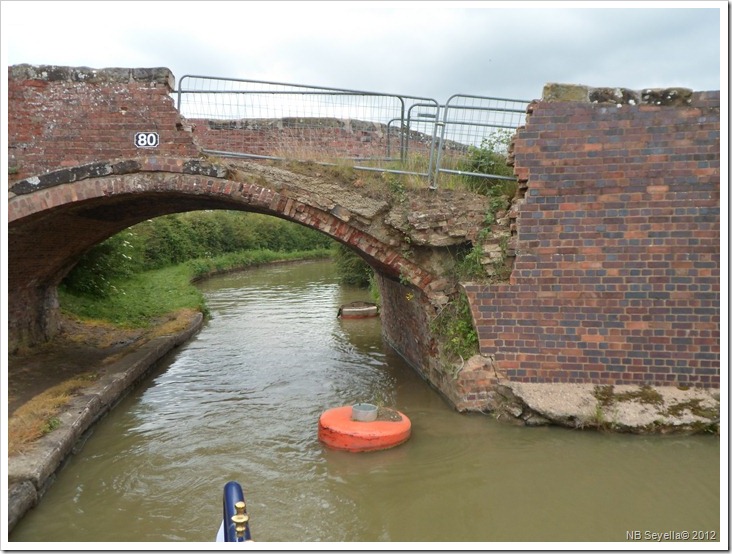 We pulled in between Br 80 and 81. It’s a popular spot normally, but today there was only one other boat here when we arrived. Several more are here now, though.