Down the Trent Valley

We didn’t move yesterday; the canal was still pretty busy, Mags wasn’t 100%,  and anyway the final day of ceremonials for the jubilee was on the TV and she’d dropped hints about wanting to watch.

I mentioned it was busy, Meg and I had a walk back to Aston Lock first thing and boats were already queuing. 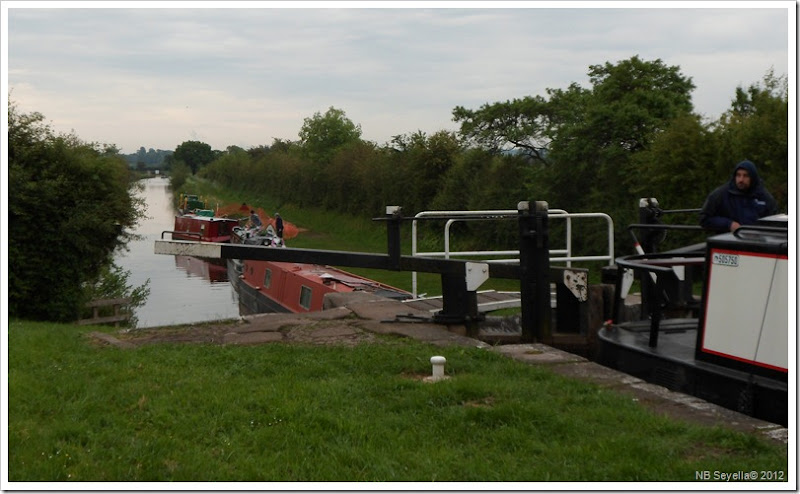 We had the ITV coverage on, it was good to see they had commentators on who knew what they were talking about (the very clever Dr David Starkey, for one), unlike the BBC’s celebrity presenters on Sunday…

I had a few pottering about jobs to do as well, so the day wasn’t wasted.

To make up for it though, we decided on an early start today, and were off by 08:20.
First Lock of the day was at Sandon, about an hour away.

The day started very pleasantly, dry and bright although not actually sunny. 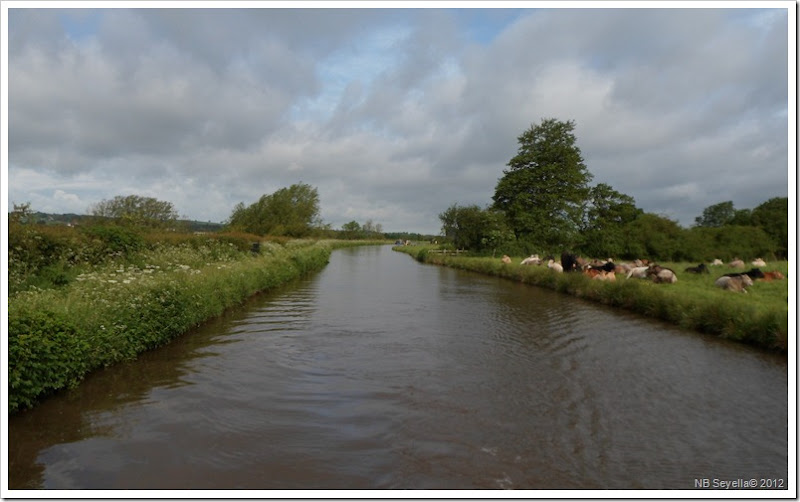 Looks like a mixed bag of cattle breeds, but all of a common mind – it’s going to rain! 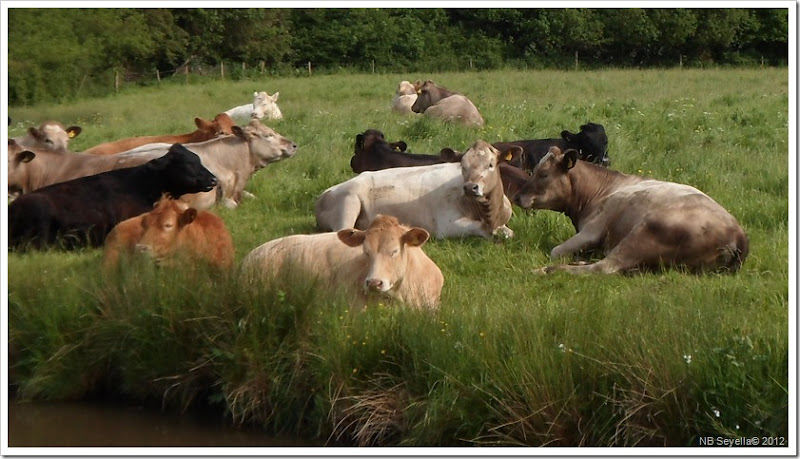 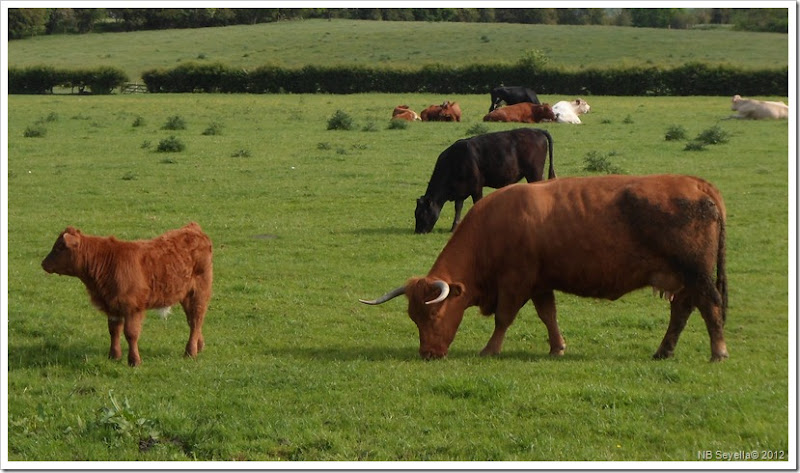 Sandon Lock was an enforced overnight stop way back in 2006 when our prop shaft partially seized in the stern tube.

No such problems today as we dropped down the lock 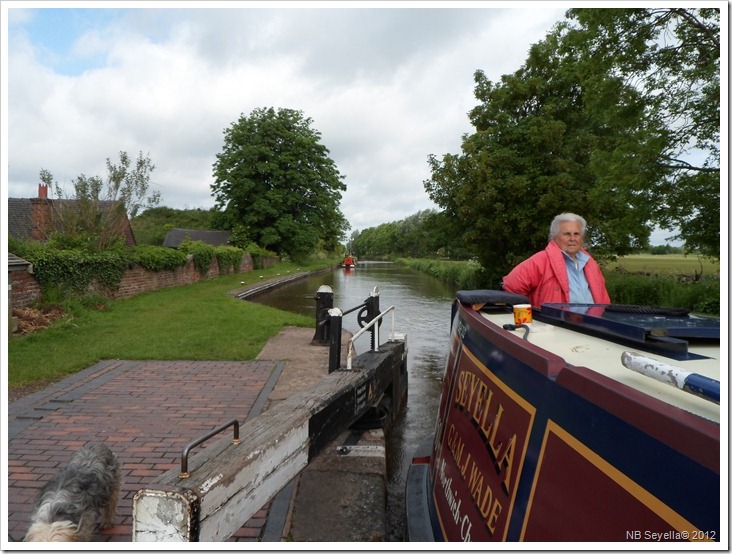 Another hour and we were at Weston Lock, meeting up with a short 1 boat queue, but were through pretty quickly. The next lock as we slowly dropped downhill alongside the river was at Hoo Mill, where we waited for NB Tia to come up. Graham and Carol have been selling environmentally-friendly products from their boat for some years, and have expanded their stock to include hand-made jewellery. They’re heading up to the Peak Forest, so if you need anything you’ll catch them heading north.

Lots of youngsters in the fields along the canal…

Mum, me legs are longer than me neck! 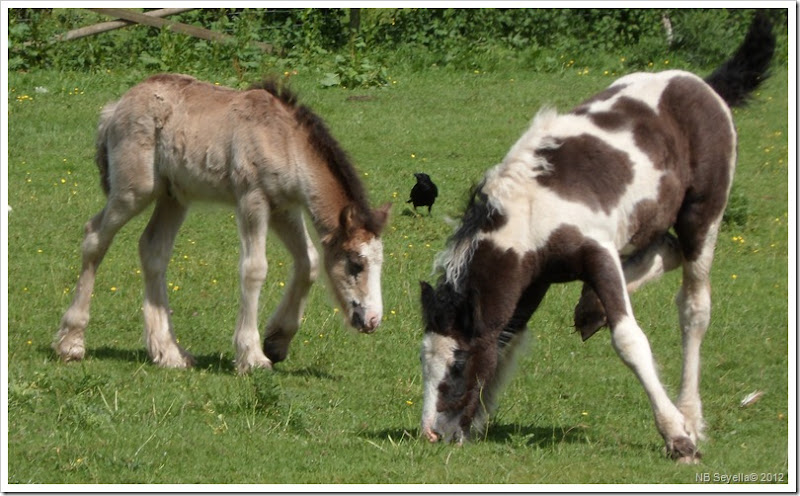 Wait for me, wait for meeee…. 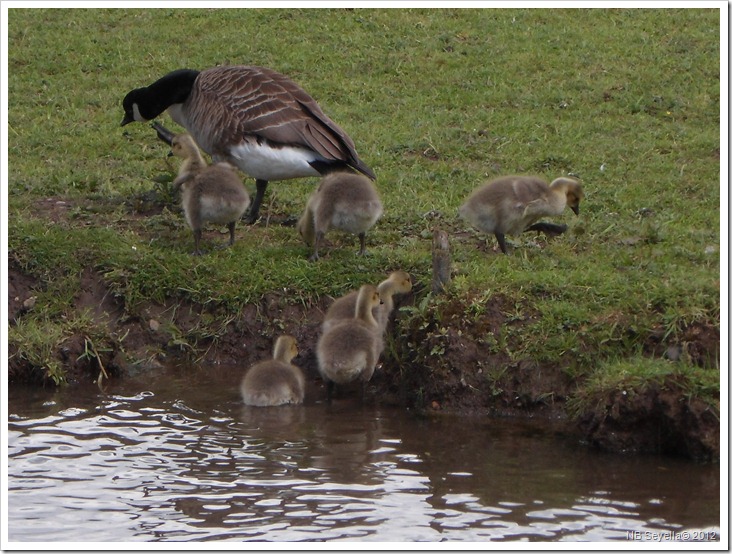 BW have been busy, putting temporary handrails on the tail bridges at Hoo Mill and Colwich Locks 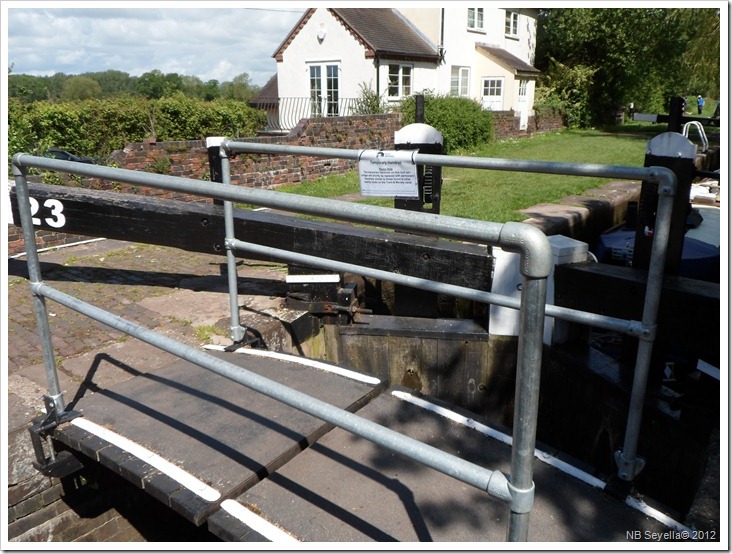 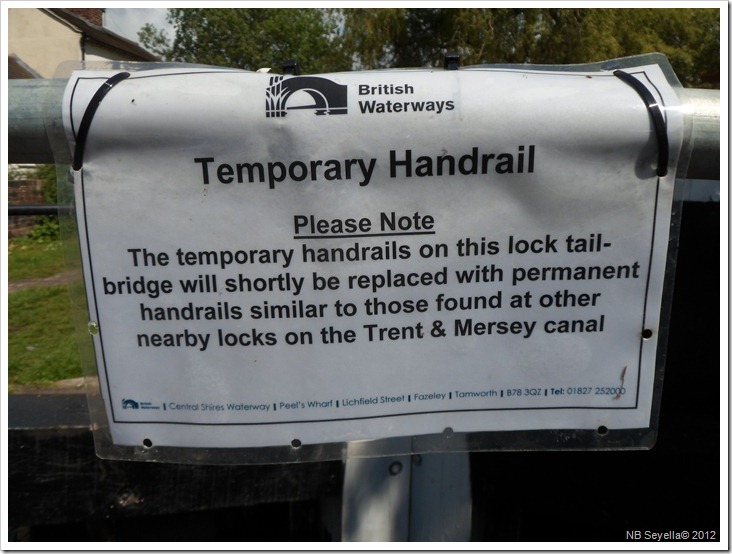 This bridge is in two halves cantilevered out from either side, with a gap in the middle to allow the tow rope of a horse boat to pass through without having to unhitch. Or at least it could…

We were planning on filling with water and emptying a loo tank and the rubbish at the services at Great Haywood, but it was a little busy when we arrived so we dropped onto a mooring space on the other side of the junction bridge and I walked back over with the disposables. 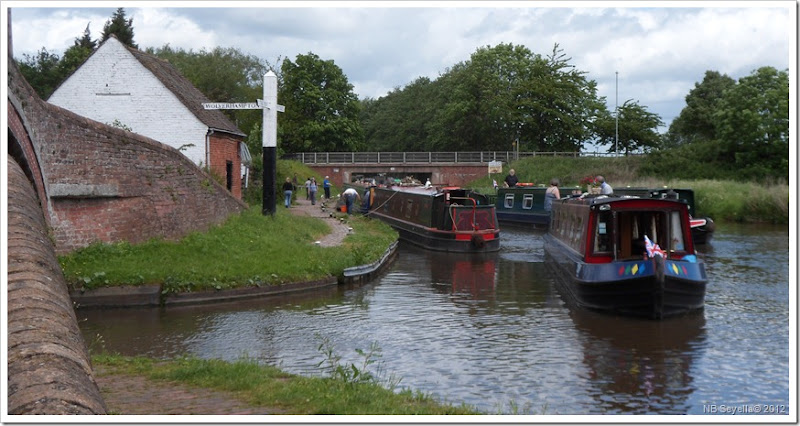 Haywood Lock was unoccupied so we were straight through, but we caught up with all the traffic at Colwich

A passing shot of Shugborough Hall 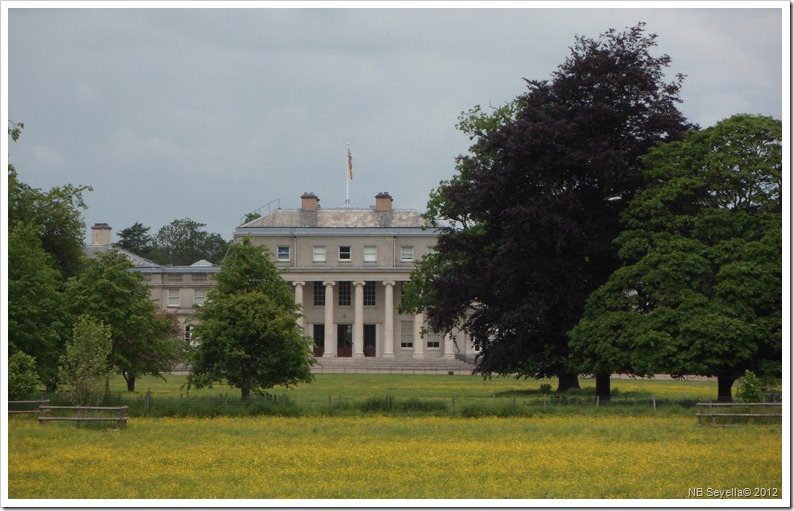 It took us an hour to get down the lock, and there were just as many boats waiting to go up… 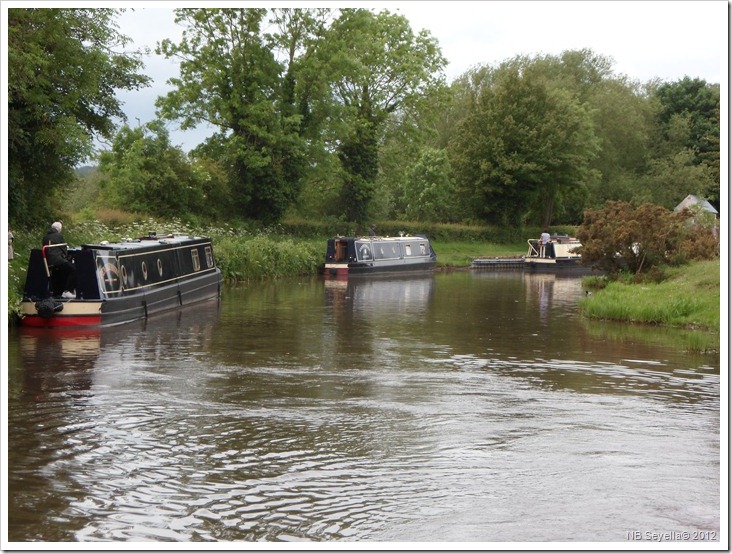 I reckon Colwich Lock exists in a parallel universe. It doesn’t matter how few boats are about there’s always a queue here. In the depths of winter when you may only see a handful of boats in a week they’ll all be here at Colwich….

Thankfully this was the last lock today, and we’d only had one heavy shower up to this point. But that was to change as grey clouds rolled in from the west. 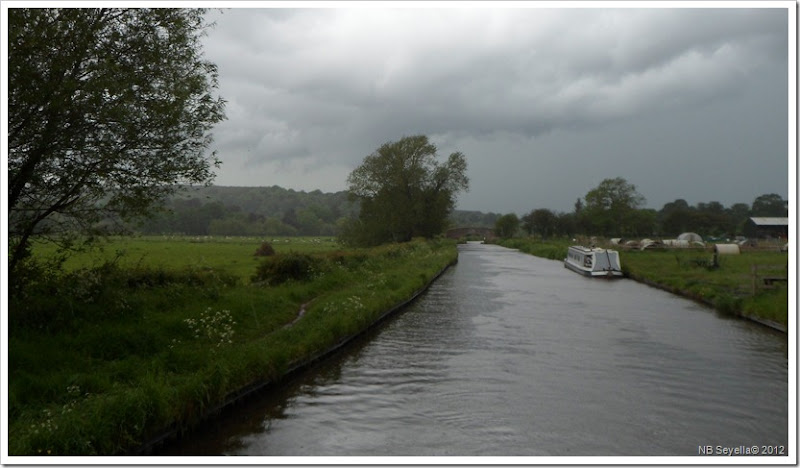 This is near Taft Bridge where we often stop overnight. If we had today we’d have saved getting quite so wet…

The canal crosses the Trent just outside Rugeley, then does a sharp left turn onto Brindley Bank, where it’s cut into the steep side of the river valley.

Around the bend onto Brindley Bank. 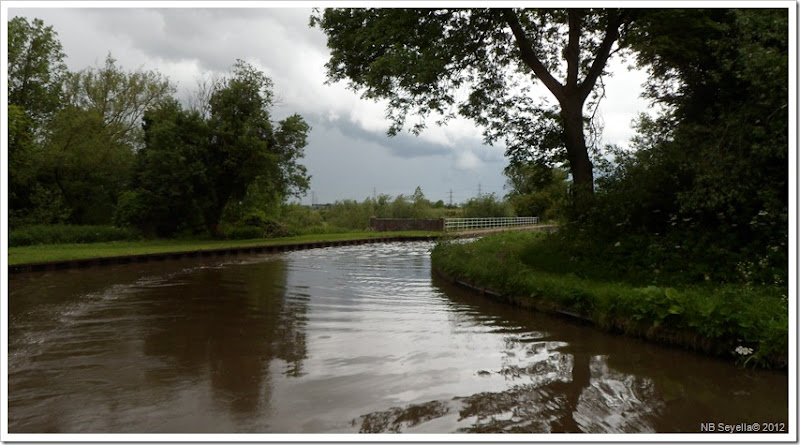 Nice curving wake… The railings are on the aqueduct over the river.

Coming into Rugeley and we got a taste of what was to come, a heavy shower, short in duration but long in intensity. 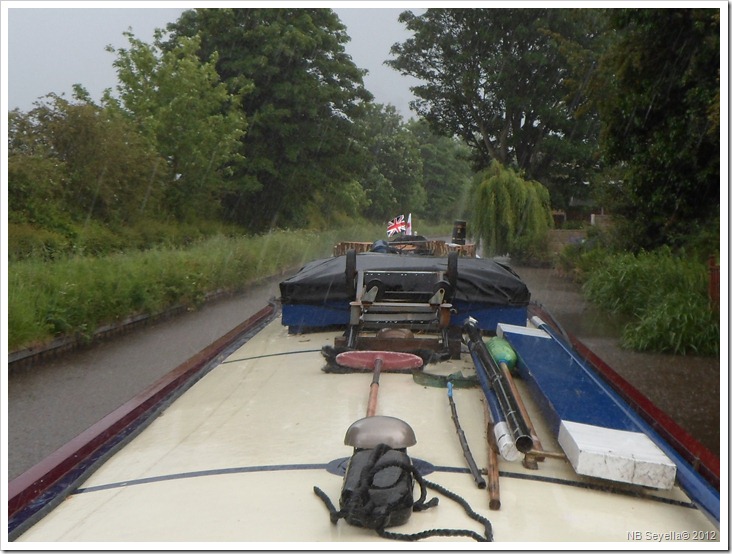 From this point on the showers were pretty well continuous, only brief respites between the spells of heavy rain. We pulled in at the end of the Spode House moorings to fill the water tank, then pushed on through Armitage “tunnel” and past the loo factory, finally mooring just past Bridge 56.

Armitage Tunnel, well, it used to be a tunnel, then got opened out, now is partially re-roofed by the widened A513 road bridge 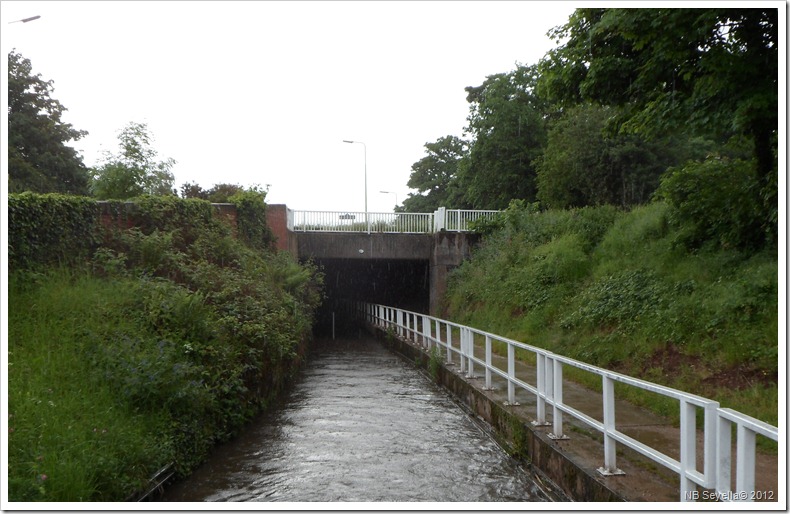 Armitage Shanks factory, more WCs than you can shake a stick at! 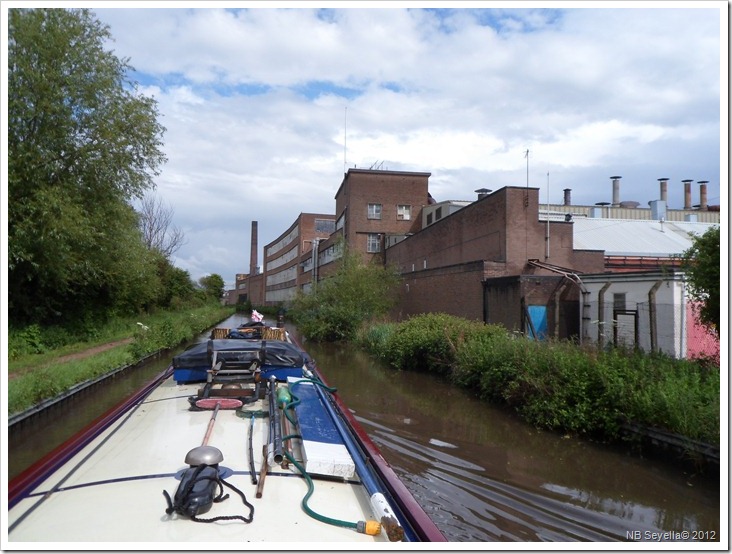 It’s been a long day, 8½ hours from start to finish. But it’s been enjoyable despite the weather.

We’ll try for another good start tomorrow, we’re 3 miles from Fradley and the locks and junction there are always busy.