Low pounds and larceny at Atherstone

Meg and I took a walk up into town this morning for a few bits of shopping, then came back down the locks. A lockie was running water down to refill the long pound above Lock 6. He thought someone had left a paddle up last night, and, with leaking gates at L6 the pound had dropped considerably. Several boats were coming down though, so this helped replenish the level as well.

When I got back Paul and Lynne on NB Piston Broke were getting ready to leave. We’d moored just past them yesterday but I didn’t go to say hello then as the weather was a bit grim. So I left the shopping and went to say Hi.
Paul was not in a good mood, some oick had been down the towpath last night and cut off his long anchor warp, coiled up on the roof. He told me our centre line had also been cut off and purloined.

Just a bit left of a 25’ rope, but we got off lighter than Paul and Lynne. 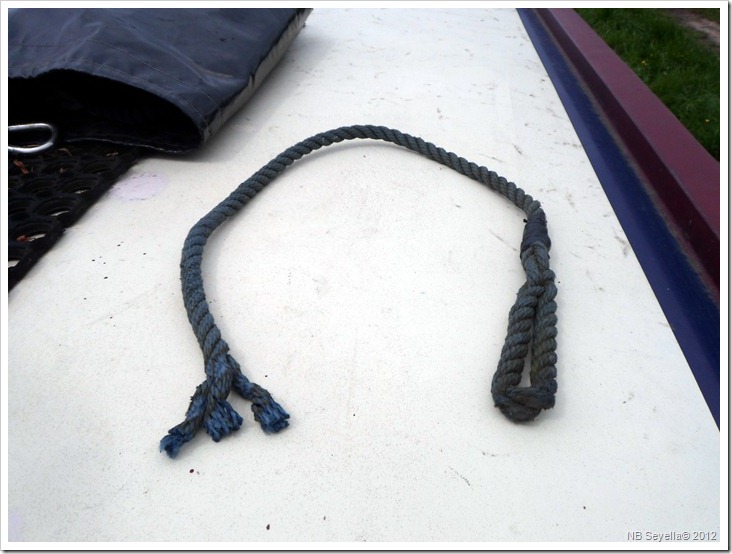 We pulled pins at just after 10:00, round the corner to Lock 9. It was full, set against us, but there were boats coming down so we left it as it was, then went in when the first came out. 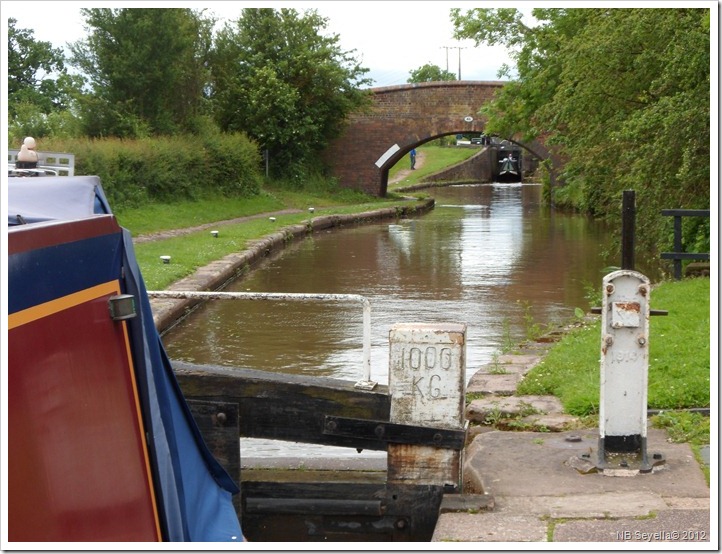 There’s a boat just coming out of Lock 8.

This was pretty much the pattern for the next few, swapping locks as boats came down. At Lock 7, alongside Barry Hawkins’ boatyard, we met a boat and the crew told us that the next pound was very low.

In Lock 7, Barry Hawkins’ yard behind. 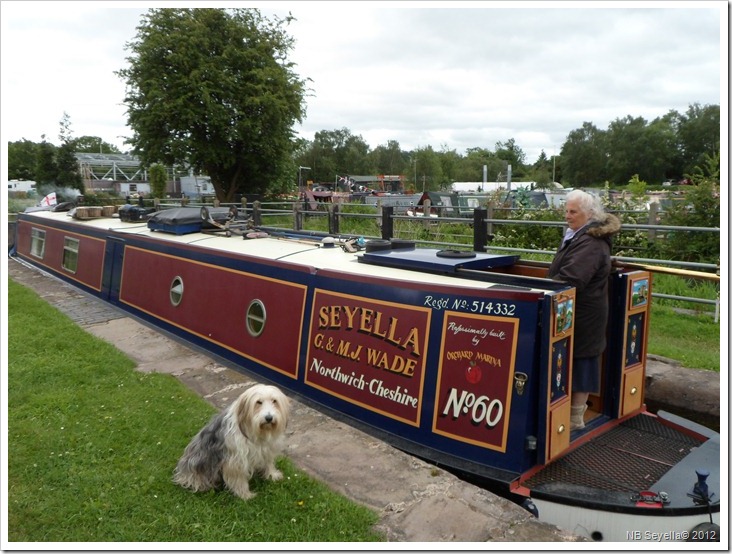 I had a look and decided that it was passable with care, so up Lock 6 we went, then Mags took it very  gently down the centre of the channel to the next lock.

Tiptoe down the channel… 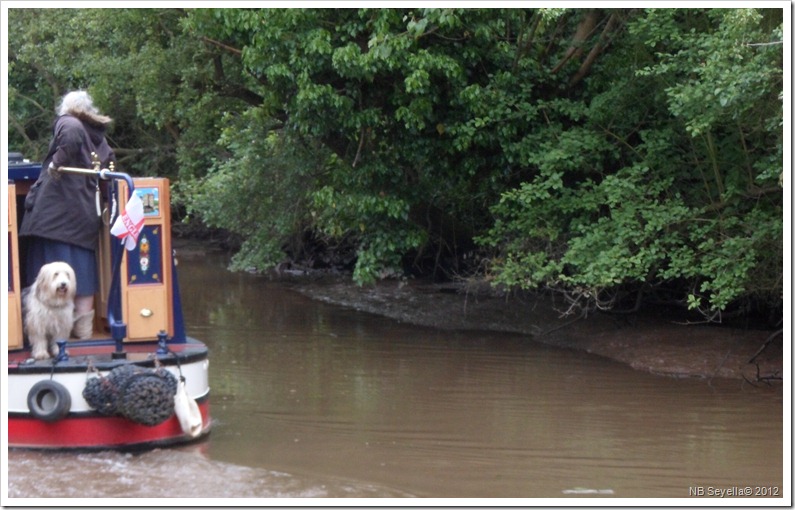 The next lock was full and once again there were boats on their way down, so we pulled over to wait for them to empty the lock. This would also put a lock-full of water in the pound. It wasn’t quite enough though, and they ran aground as they came out of the lock.
Judicious use of the long shaft and a tow from the bank got them clear and away, then we had to bow-haul Seyella over the mudbank and into the lock. The problem with motor boats is that the stern digs in when they’re under power, making matters worse. Sometimes hauling from the bank is the only way.

After this bit of excitement and unlooked-for exercise we made steady progress up the rest of the locks, plenty of water and a steady procession of boats coming down.

Between L4 and L3 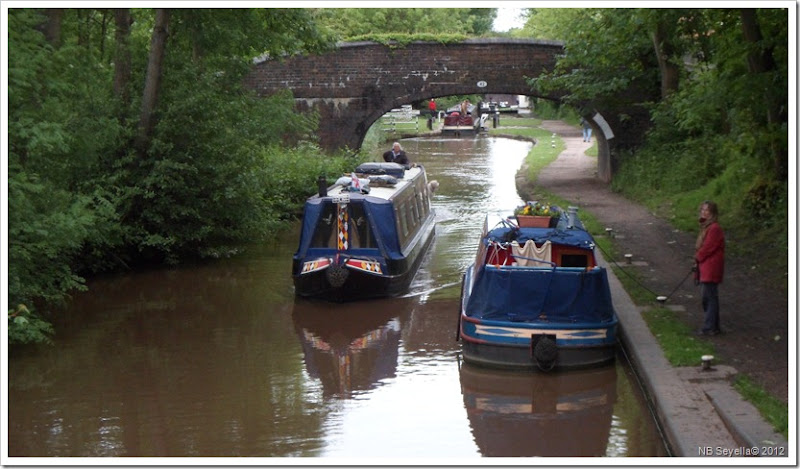 These were built so the canal owners and managers could inspect the navigation in comfort and style.

Coming out of the top lock Mags insisted I take over on the tiller. There were boats all over the place, shuffling about trying to get in the queue to go down. 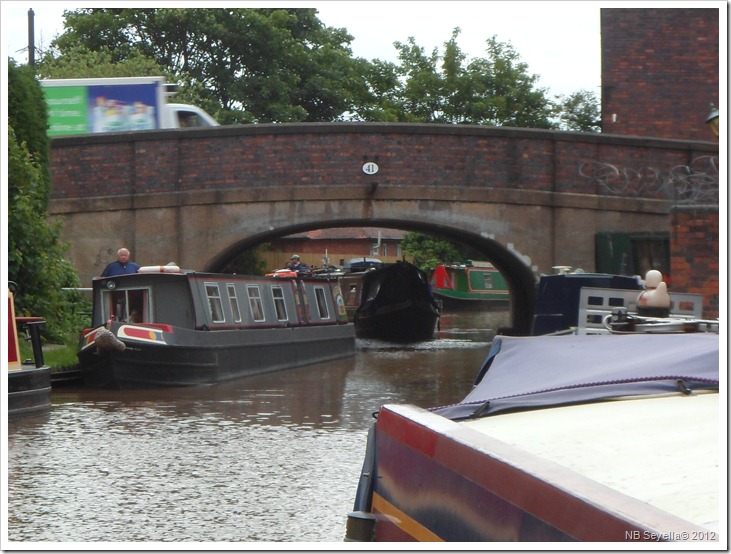 Through this lot very gently, then we motored out into the country again. 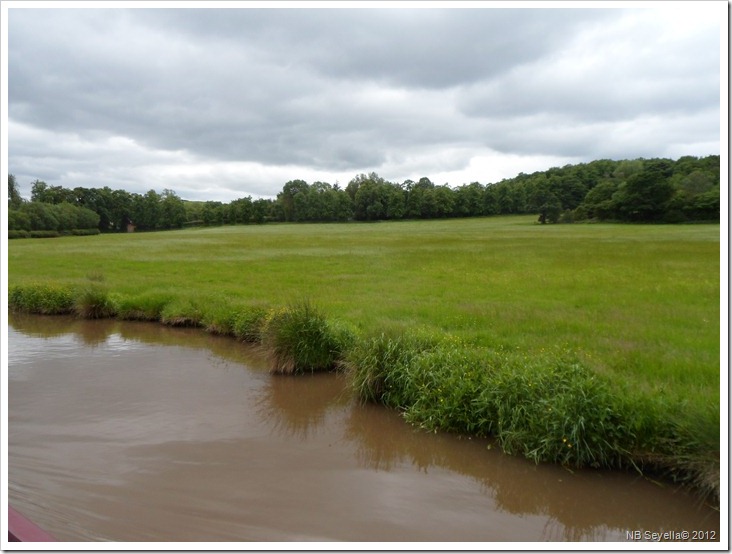 We were aiming for Hartshill, after Bridge 33, but we spotted a very pleasant spot just a ¼ mile sooner, and decided that will do. 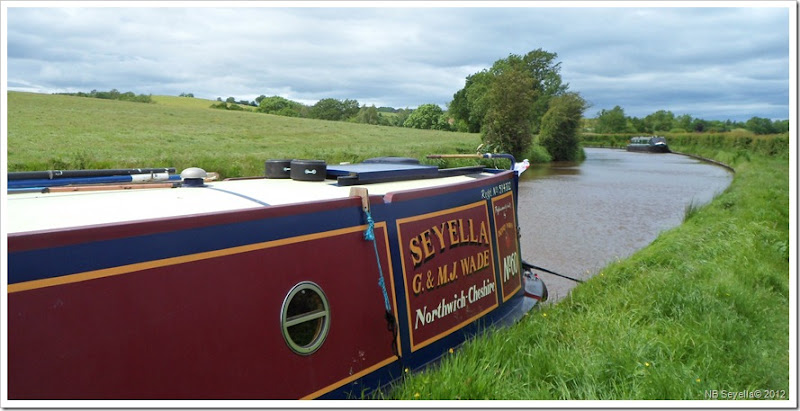 We had a gusty wind earlier but that eased in the afternoon, and we’ve had not a drop of rain though it did look threatening for an hour after lunch.

We intend to stay put tomorrow, I was hoping to watch the Canadian Grand Prix but I see that the Beeb has only got  a highlights show on, and that’s not until 10:30. We’re going for another longish day on Monday, so don’t want to be up that late.

As a resident of Atherstone may I offer my sincere apologies for the problem you had with a thief.
I will bring the matter up at the next Town Council meeting and see what can be done about improving security on the canal.
We welcome all visitors from the canal and value your contribution to our town.

Hi Geoff
Thanks very much for the comment. I realise that it's only a very small percentage of idiots who spoil it for the rest. Unfortunately these incidents tend to put boaters off from stopping overnight, so any reassurance is welcome.
All the best