We had 5 miles and 4 locks to do to get to Banbury for shopping, so got of at 09:30 again to make it for around lunchtime.

There’d been a steady stream of boats passing before we left, mostly heading north, and we timed it just right with Rock’n’Roll able to go straight into a full lock, then us swapping with another uphill boat. 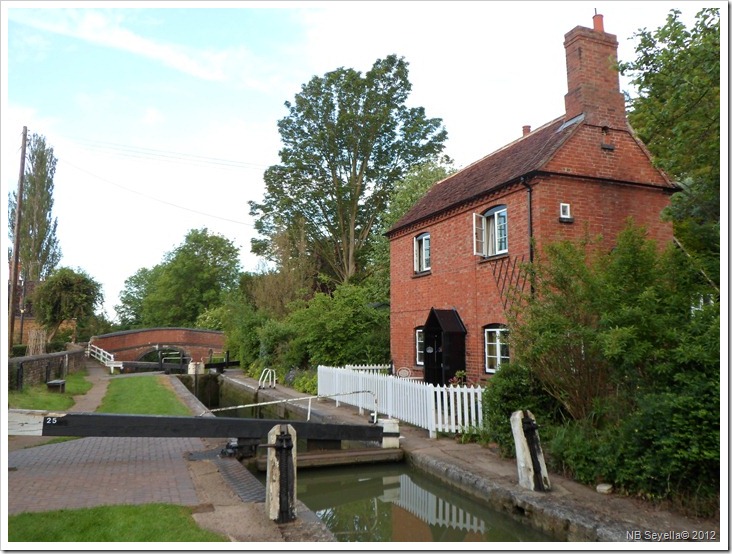 That was the last we saw of George and Carol till Banbury. We pulled onto the services to empty rubbish and a loo tank and a boat pulled off the moorings below the lock in front of us. So we never had a chance to catch up with R‘n’R.

At Cropredy the canal and River Cherwell converge, and from here to Oxford are never far apart. The village pre-dates the canal by over 700 years and there has been a bridge over the river since at least 1312. It was here, in late June 1644, that an indecisive battle between Parliamentarian forces under General Waller and King Charles I’s own troops.
Under threat from two armies advancing on his Oxford stronghold, Charles decided to quit the town and headed for Daventry with his army. Waller’s troops caught up with him at Banbury, both armies facing each other across the River Cherwell.
Waller’s position was the stronger, being on high ground with marshland in front, so the King wisely chose to continue his march north, on the eastern bank of the river. Confusion led to a gap appearing in the column which Waller decided to take advantage of. If he could insert troops into the gap he would split the King’s forces and maybe destroy them.
Unfortunately (for him) his information was inaccurate and the sally found itself in a cross-fire and had to retreat across Cropredy Bridge, leaving several pieces of artillery to be captured. The fighting see-sawed over 3 days, both sides becoming tired and short of supplies. Finally the King, learning of the approach of fresh Parliamentarian troops, decided to disengage.
The battle wasn’t conclusive, although the Royalist losses were far less than their opposition, and they’d also gained valuable cannon. A more crippling blow, this time against the Royalists, occurred at the Battle of Marston Moor just a day later.
Here, near York, 18,000 Royalists under Prince Rupert met 28,000 Parliamentarians under Oliver Cromwell. A short sharp battle left the Royalists defeated with heavy losses and the Roundheads in control of York and effectively all of Northern England.

Fields alongside the Cherwell. Here, 368 years ago, men fought and died. 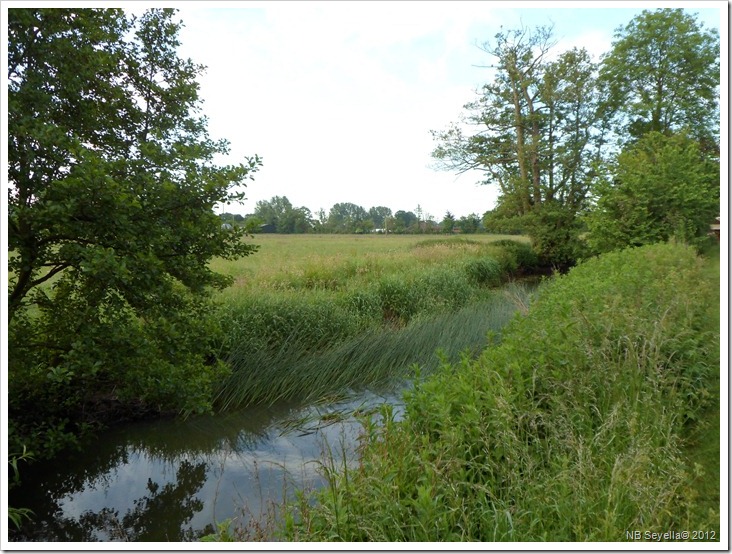 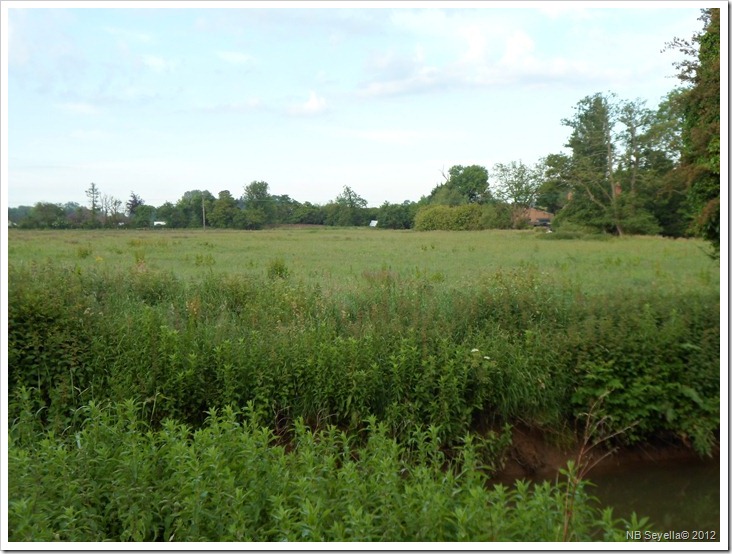 Back to the 21st century and we had a very pleasant, sunny cruise, the locks spaced out at 15 to 20 minute intervals. 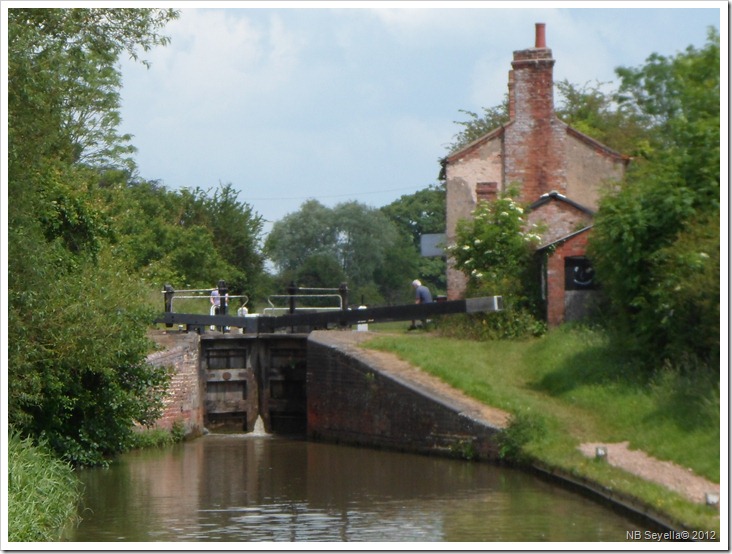 The lock keepers cottage here has been under renovation for some years.

The M40 bridge marks the boundary between rural and urban. There’s still one more lock before Banbury, but industrial units soon encroach on the canal. 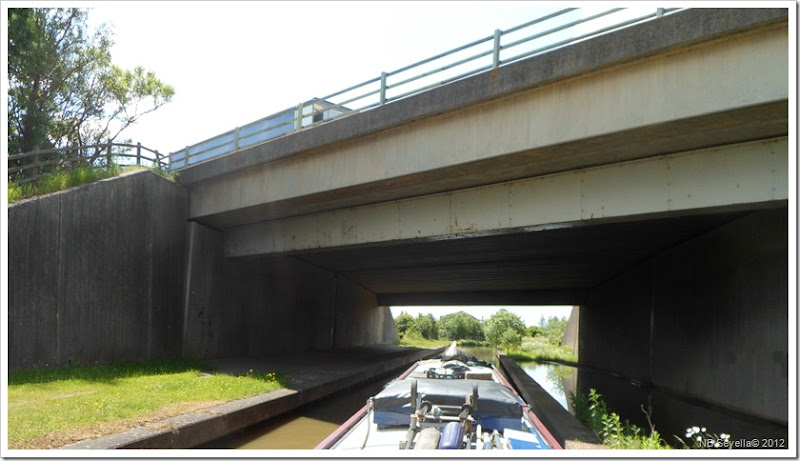 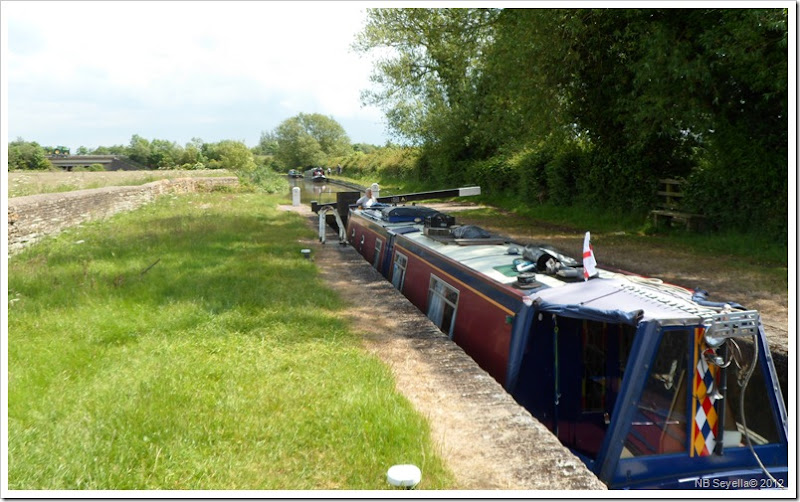 Moored in Banbury, busy with boats moored on both sides. 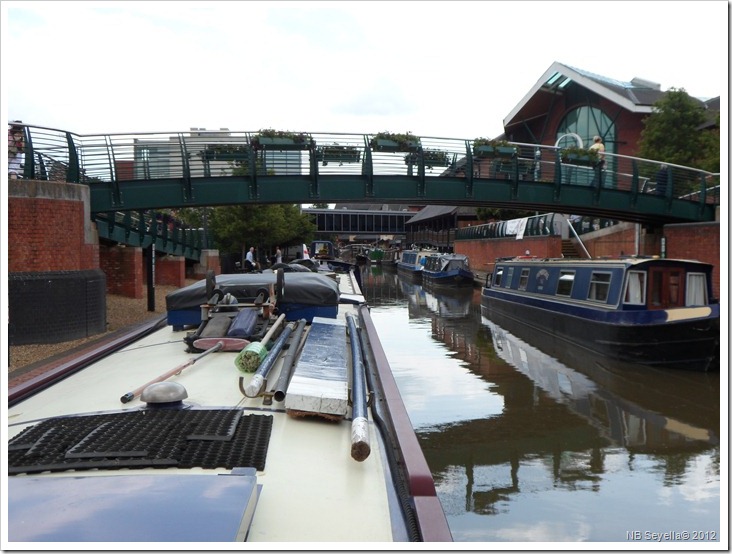 Chas and Anne on NB Moore2Life have been here for a few days, engine trouble preventing them from moving on. I left Mags and Meg on board and went across the canal to Tooley’s Boatyard where they were moored. There I found that George and Carol had beaten me to it, and Del and Al from NB Derwent 6 had walked into town, too. Well met!

Bevy of boaters – George and Carol, Al and Del, Anne and Charles. And of course a pair of Molly dogs. 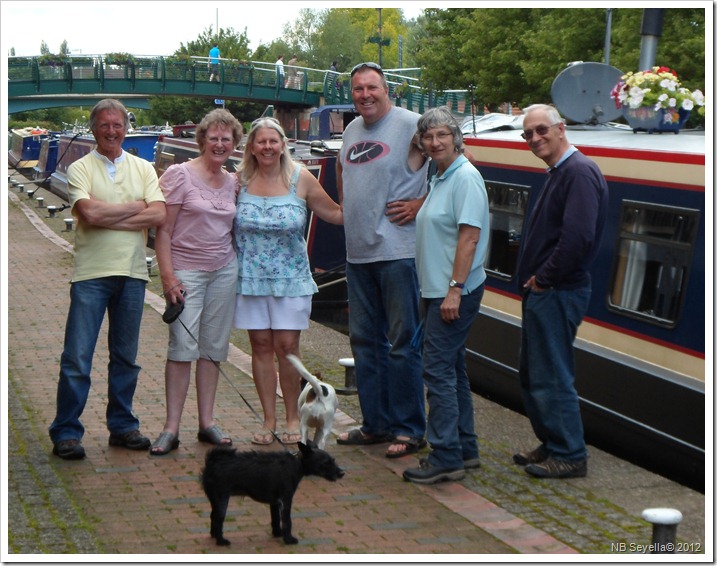 We all repaired to Rock’n’Roll for tea and cakes, then we really had to go shopping if we wanted to move out of town for the night.

That done we said our goodbyes to Anne and Charles (they’ll follow us in a few days) and got away. 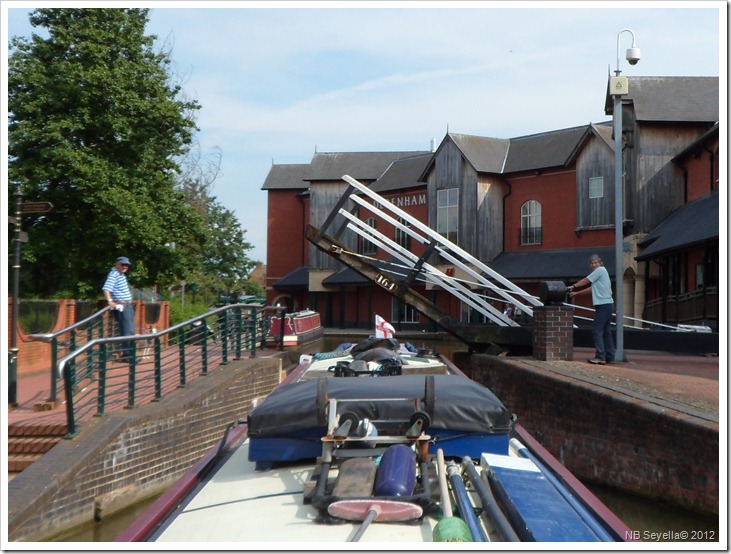 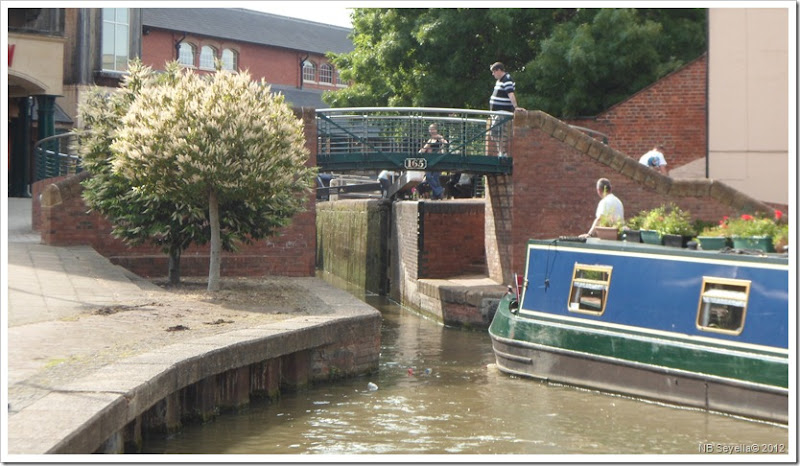 Just over a mile out of town we passed Derwent 6, unfortunately no space on this stretch of piling, so we finished up just around the corner. 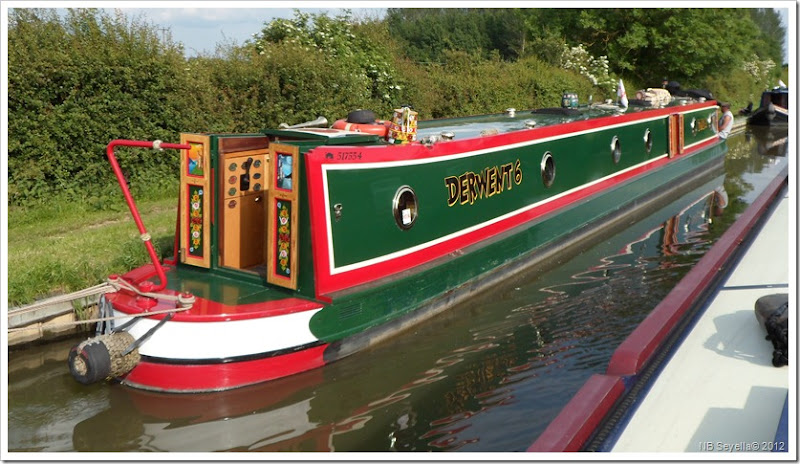 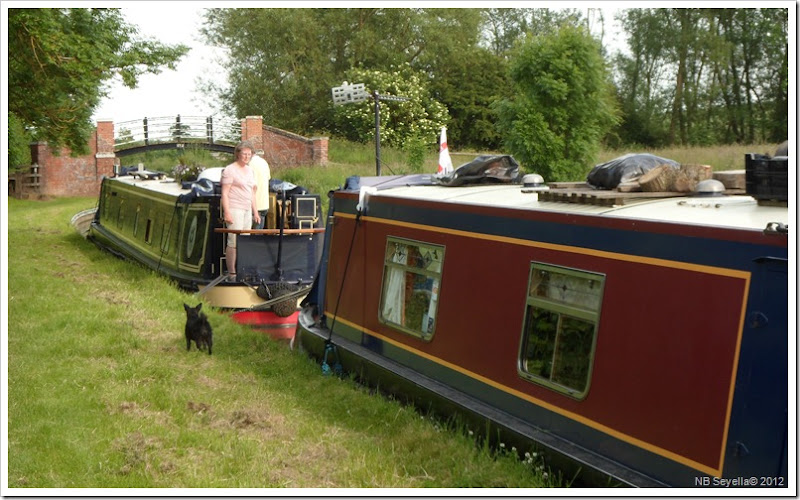 George and I took the hounds for a short walk down to the river. Of course, Meg was straight in…. 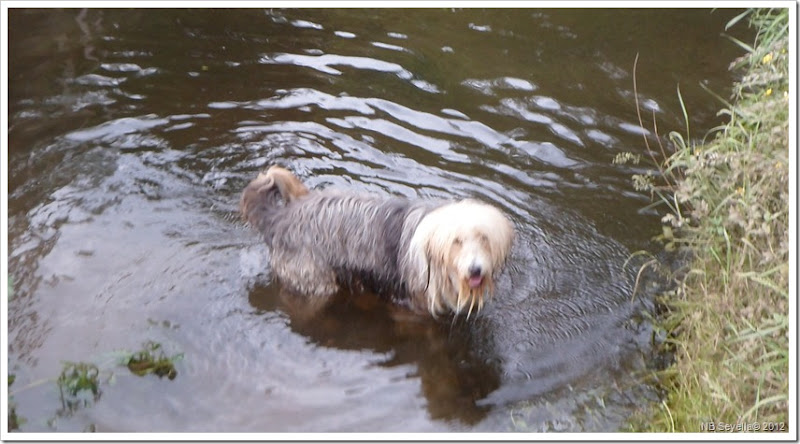 Molly had a cautious paw-wetting dip, then they both had a whale of a time chasing each other through the long grass to dry off.

“You go first this time” 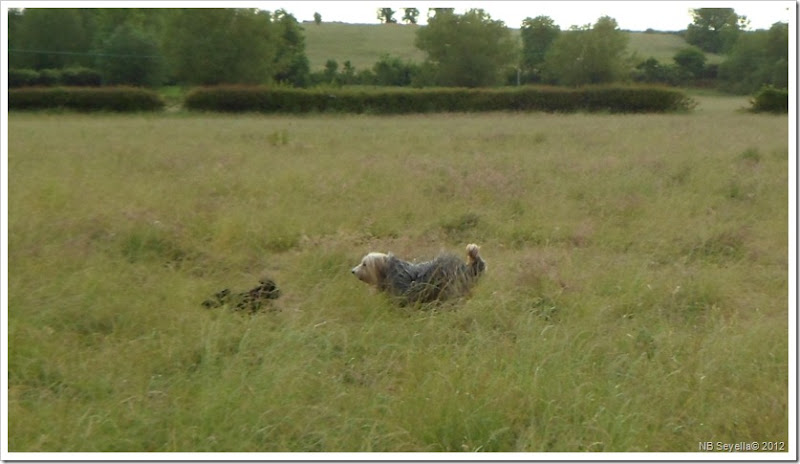 Looking at the forecast it’ll be a staying indoors day tomorrow. The rest of the week’s not looking so good, either. Ah well, it was nice while it lasted.

Andy and Roger, hi. Thanks for the comments. Andy, thought they were, but they’re not something you’d expect to see in the English midshires! Roger, it’s definitely 1934, moss obscures some of the detail. Yes, we’ve been keeping an eye on M2L’s woes, all resolved now but a cautionary tale.

Goeff regarding the diesel bug saga. Dont know if it is of any use but went out on Brindley yesterday for the first time since I winterised it last November(domt ask long story and very frustrating!) - didnt seem to have any problems and still need to check the fuel filter but am sure the eengine would have complained if any contamination. I use Marine 16 complete as an additive always adding before filling up so it mixes well int he tank. Will continue to do so as well me thinks

i see the mob is back together then. I quote you with the braunston mob