Up out of Stratford

Yesterday was showery, so we stayed in Bancroft Basin. It gave me a chance to have a look around the town, get some shopping and get in a long walk with Meg. 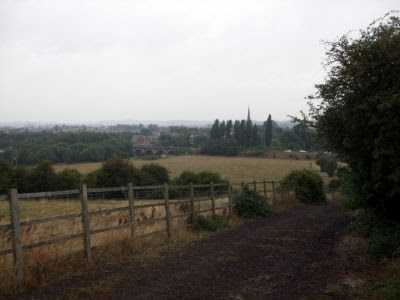 The Gower Memorial alongside the basin.

Shakespeare is surrounded by four of his characters; Hamlet, Falstaff, Lady Macbeth, and Prince Hal.
Although Prince Hal seems to have committed some sort of crime – he’s behind bars! 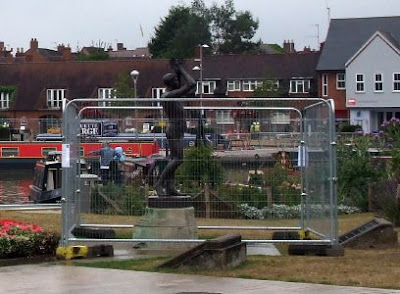 Yesterday morning we had to help a couple of boats out of the basin, there’s not a lot of room to manoeuvre, and the brisk breeze didn’t make things any easier.
The water level in the basin had dropped a bit overnight as well, leaving NB Nomad Dream aground. Judicious use of organic ballast (people) got her free.

NB Nomad Dream on the bottom. 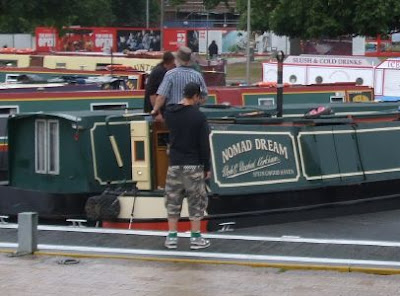 We were away at 08:30 this morning, surprisingly, considering the number of hire boats here, the first on the move. 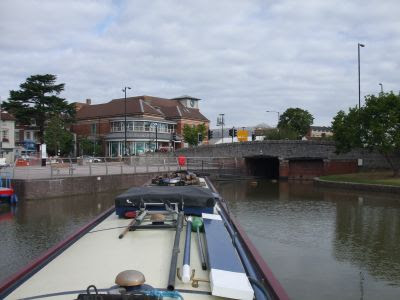 The Stratford on Avon Canal was built with narrow locks, and they do seem small after the river locks on the Severn and Avon.

Lock 55, the first of the narrow locks.
Lock 53 stands alongside a widened bridge, and has had it’s lower balance beam removed and replaced with a cranked iron framework. I had a lot of trouble moving this one. Without the counterweight of the beam, the gate is heavy and awkward. 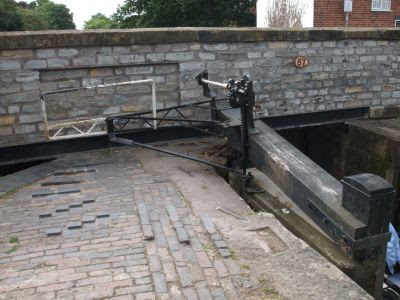 Usually on narrow canals the lower end of the locks have a pair of mitred gates. This canal has single or clapper gates at both ends. The locks are around 7’ deep, so the lower gate is big and heavy. Mitre gates split the weight and are a doddle.

There are 5 locks spaced out over the first 1½ miles lifting the canal up from the river, then the bottom of the Wilmcote Flight is reached.

Up out of Stratford. 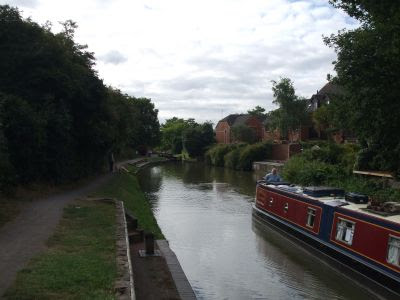 The Wilmcote Flight lifts the canal another 77’ through 11 more locks.
You’re well out of the town now, and the flight runs through wooded countryside.

On the Wilmcote Flight 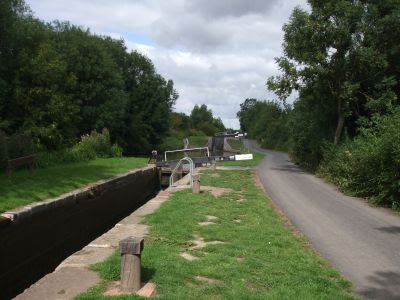 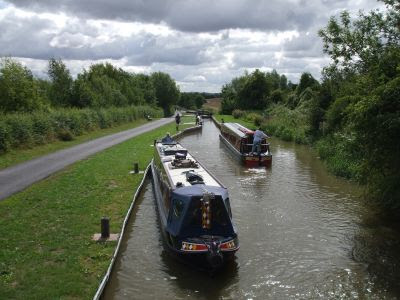 We had a fairly easy run, with several boats coming down, and reached the top lock shortly after noon.

We looked for somewhere to moor, rejected the 48 hour section near Wilmcote (too many trees), and pulled in on a short bit of piling a quarter mile further on. It’s going to be quiet tonight after a couple nights in the bright lights of Stratford…