Just after we moored yesterday afternoon another boat pulled in behind us. I asked if they were going down the flight today, they said they were so we agreed to share the locks and the work.

This morning they needed to top up their water tanks at the top of the flight, so pulled off 10 minutes before us. Before we had a chance to follow, three more boats had inserted themselves between us.

I don’t think they were best pleased, but Alison and George had filled up and set the lock ready, and made it clear that we were the boat that they would share it with. So we casually cruised past the queue, joining NB Utopian in the top lock.
The Hatton flight consists of 21 broad locks, dropping the navigation 146’6” to Warwick 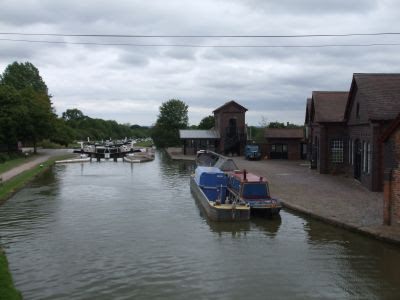 The locks are numbered from Napton Junction up to Birmingham. These are the 4th and 5th going down the flight. 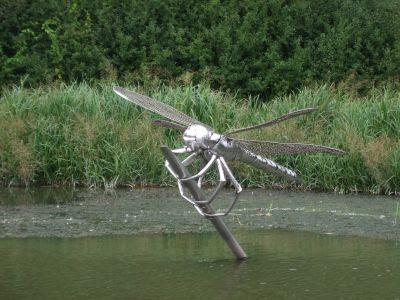 We were nearly ½ way down the flight before we met a boat coming up. Before that all the locks had to be refilled as there was a hire boat going down in front of us. The unusual “candlestick” hydraulic ground paddles can be seen.

These locks are very efficient. Replacing an earlier flight of narrow locks, they were built in the 1930’s when the canal was modernised, in the vain hope of enticing more freight back from the railways. They fill and empty at an astonishing rate. With Alison looking after the lock the boats were in, I was walking down to the next to get it set up ready. I barely had time to get there and get the lock filled before the boats arrived.

In the flight, around the middle 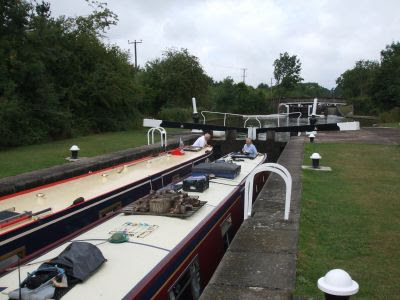 Smiles all round, last lock of 21.Alison, George and Mags satisfied with a brisk three hour’s work.

We’d got the number of the manager of the moorings in the Saltisford Arm, and George gave him a ring to see if he could fit us in. No problem, so that is where we finished up.

Breasted up in the Saltisford Arm 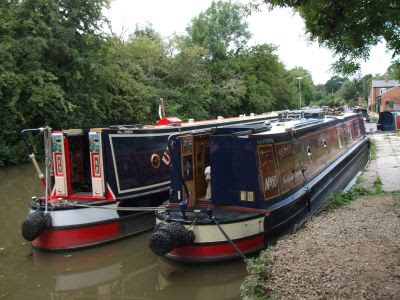 This arm was originally the end of the Warwick and Birmingham Canal, opened in 1799. Shortly after, the Warwick and Napton Canal was completed, running across country to meet the North Oxford Canal at Napton Junction. The connection to the earlier canal was made outside Warwick, nearer the Hatton locks, so the original terminus became a spur, feeding wharves and basins not far from the town centre.

Fast forward 150 years and the Arm had become derelict, partially filled in and built upon. A group of local enthusiasts set up a Charitable Trust, restored what was left, and now manage it as a boaters amenity, with permanent and visitor moorings, facilities and a small shop, all within a few minutes walk of the town centre.
We were lucky to be able to get in, it’s a popular spot from which to explore the town.

We’re only going to be stopping the one night, town moorings are not our thing.
George and Alison are intending to stop a little longer.

Incidentally, if you’re looking for a sixty foot trad stern narrowboat, Utopian is for sale. Get in touch if you want details.