A damp trip up Stockton

After all the rain yesterday afternoon I didn’t expect it, but was pleasantly surprised by clear skies at around 11 last night. I spent 10 minutes looking up into the night to the NE and was rewarded by a couple of streaks in the sky from the Perseid meteor shower. It was decidedly chilly though, so 10 minutes was enough!
I couldn't take any pictures, but there are some here.

The forecast today was for showers, or more persistent rain, and it wasn’t wrong. We hung on till gone 10, hoping for blue skies, but the best we got was a temporary reprieve from the drizzle.

Several boats had already motored past us, heading in the same direction as us, so I expected there to be a queue at the first lock, just 10 minutes away.
There was, but the pair that were just going up were following a solo, so one of them elected to catch up and share while the other waited for us at the second lock to share the rest of the flight with us.

This was NB Water something or other (sorry, I’ve forgotten again!), with Emily and Lisa on board. 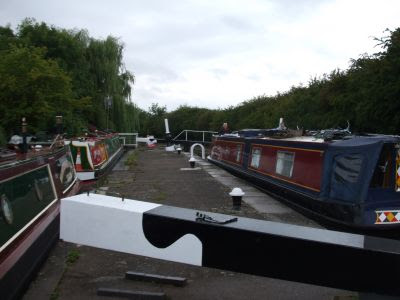 Swapping locks at Bridge 22, about half way. 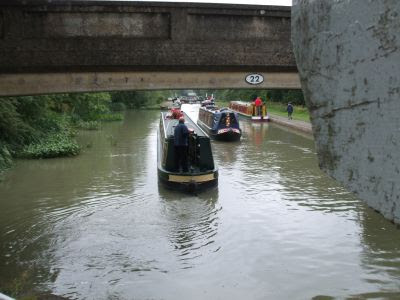 Although it was damp all the way up, we worked well together and reached the top of the ten locks in a couple of hours.

Near the top, cycling gongoozlers. 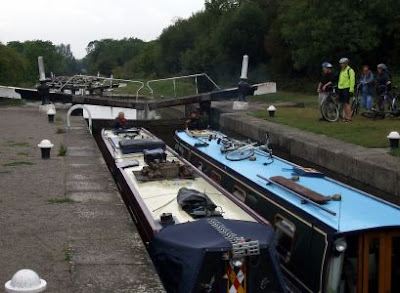 We cruised on just another 10 minutes, pulling over on the straight between bridges 21 and 20.

A bit of congestion at Stockton Top Marina. 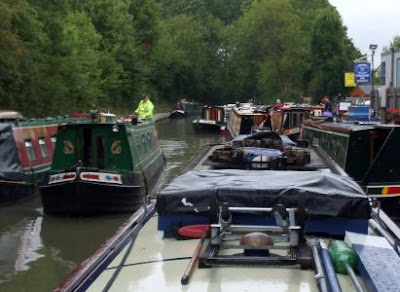 If the weather had behaved itself we’d have pushed on up the last three locks at Calcutt, and out onto the Oxford Canal. But the showers have got heavier and more frequent this afternoon, so we did the right thing.

Hi Geoff. It's N.B. Water Woodstock. I'm glad we paired up with you as we were cream crackered by then. Bo Voyage, Emily.

Hi Both
It was a good morning, wasn't it. Enjoyed your company, and will try to remember the boat's name!
Happy Cruising....