On the Upper Avon.

We had a bit of a disturbed night last night. The rowing club opposite had a “do” on till late, and Meg was a bit unsettled, with traffic and odd noises going on. Me, I slept through it all. Clear conscience, you see.
Town moorings are not normally our thing, but beggars can’t be choosers on the Avon.

We were off at 09:00 this morning, wanting to do a bit before lunchtime, so we could get settled to watch the Hungarian Grand Prix.

Evesham Lock, just after 9 this morning. 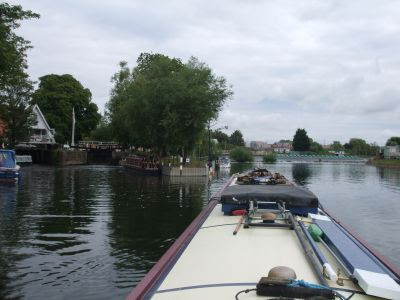 There’s a resident Lock Keeper here, where the Lower Avon ends and the Upper Avon begins. If memory serves, you used to have to have a separate licence for each section, as they were run by different trusts.
He’s got a splendid chalet style lock house, sitting over the old millstream. 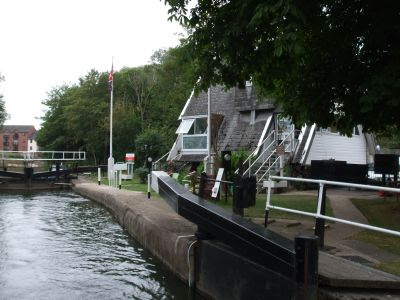 The Upper Avon is a lot narrower in places than below Evesham. Shallower too. This means that the flow is considerably more evident. Approaching the locks means pushing against a good flow, and that’s in these dry conditions.

On the Upper Avon 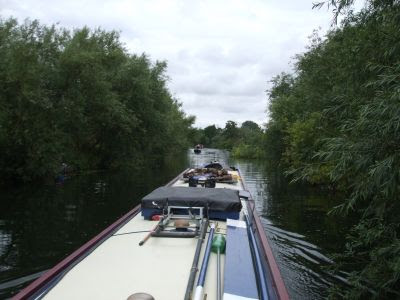 The Upper Avon had been derelict for some time before it was finally re-opened in 1974 by HM. Most of the locks have been resited rather than rebuilt, hence they tend to be functional rather than attractive. The new chambers have new names, dedicated to the benefactors who made the restoration possible. 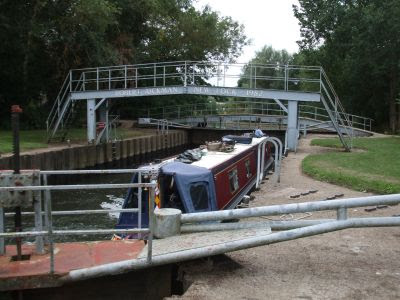 But in a beautiful setting. 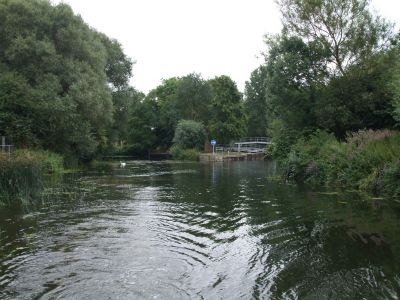 This used to be Harvington Lock, the long closed Harvington Mill stands alongside.

We were lucky enough to be able to share the first two locks with NB Grand Ecu, an aluminium Sea Otter, recently bought and being moved to it’s new home on the Grand Union. But a small narrowboat managed to insert itself between us before Harvington, so we were left to do two on our own.

Marcliff Lock (now IWA Lock) is another in a beautiful spot, with the weir stream rushing in from the left below the lock. Could be decidedly tricky in wet weather I suspect. 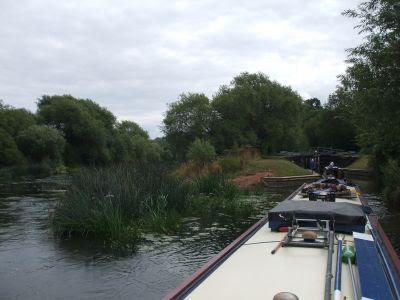 We had to wait for the two boats in front to go up, and another to come down before it was our turn.

Waiting at Marcliff Lock. I’m telling Meg to get back on board. 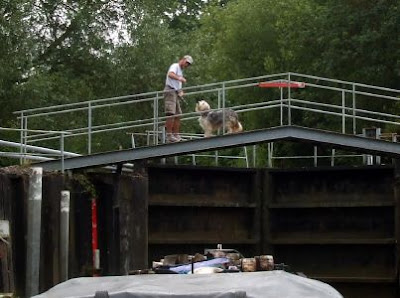 Up to this point we’d made good time, so pushed on to Bidford, arriving just before 13:00. 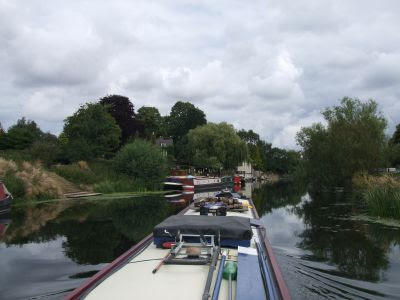 At this time of day I expected there to be plenty of mooring space on the right, against the Recreation Ground, but this was all full. So we motored across and moored on the Frog and Bulrush mooring just below the old bridge.

I got the aerial set up in time to nearly catch the start of the race, watched a few laps then a gap appeared over on the other side of the water, so we hastily untied and did an S bend to get on the mooring there. It’s seems all the action in Hungary was in the bit I missed. Sod’s Law I guess.

After the race I took Meg for a ball session on the playing fields alongside, then spent a very pleasant hour chatting about classic cars and boats with a couple driving a beautifully restored Standard 8.

Maurice and Glynnis and Standard 8.(apologies if I’ve spelt your names wrong!)

It’s been another warm but overcast day. The sun tried to make an appearance later on the afternoon, but soon gave up the attempt.

The river hasn’t seemed very busy, but moorings fill up rapidly. I like cruising rivers, but this is one of the downsides. Every spot is filled here now, and some boats are breasted up again.
Still, be back on the canals on Tuesday, then I’ll be complaining about the murky water, shallow channel, speeding boaters…..