A short day to Wootton

This canal is a delight, It’s far more pleasant in the summer than in the winter, when we made our previous visit. It’s well worth a visit in it’s own right, although it’s more often treated as a through route on the Avon Ring. 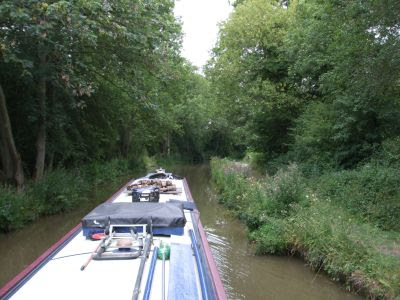 It’s narrow, shallow at the edges and a marked contrast to what we’ve been doing the last few weeks, but very enjoyable.

I’d arranged for a mail drop at Wootton Wawen Post Office, so we only had a short trip today. It was appreciated by the crew after yesterday’s exertions.

The canal had a difficult birth and precarious existence. Planned to connect Stratford to the main network south of Birmingham, it ran into financial difficulties almost straight away. It finally took almost 20 years to make the route from Kings Norton on the Worcester and Birmingham Canal down to the Avon at Stratford.

The engineer was William Whitmore, and he used cost saving techniques to build the structures, single gates on both ends of lock chambers, split arch iron cantilevered bridges and iron troughs on brick abutments for the aqueducts. He was innovative, offering to build a new design of boat lift on the Somerset Coal Canal free of charge in exchange for a lump sum and a share of the cargo tolls if it worked. The scheme was not approved.

The Stratford On Avon Canal opened around 1812 and was initially fairly successful, the main cargo being coal from the Black Country. But it soon suffered from railway competition, and traffic declined rapidly. It only had an independent life of 40 years before being bought by the Great Western Railway.
The northern section from Kings Norton to Lapworth (the connection to the Grand Union) still carried sparse commercial traffic into the 1950’s, but the southern section had long since fallen into disrepair, badly silted with decrepit locks.

It was nearly abandoned 1958, but public pressure forced the proposal to be rejected, and in 1960 the National Trust took over a lease on the Southern section, with an agreement to restore and maintain the navigation. The restoration was accomplished in 1964, with the help of prison volunteers, army units and local enthusiasts (as on the Upper Avon), and officially reopened by the Queen Mother on July 11th.

In 1988 British Waterways took over responsibility for the waterway, relieving the NT of a burden they didn’t really want anyway.

We only had one lock to pass today, at Bearley. A boat was just leaving as we arrived, so that was easy. 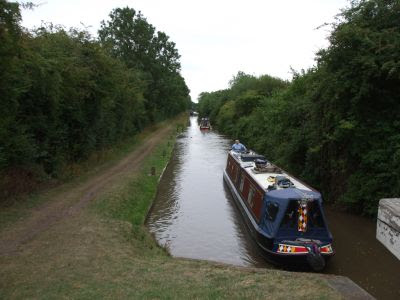 At the far end of the long straight in the picture we’d crossed the first of those iron aqueducts, at Edstone. 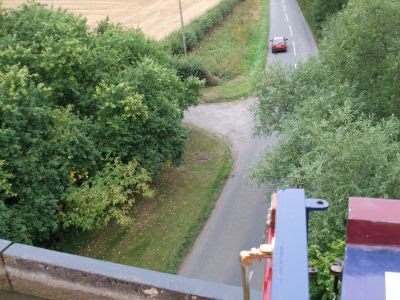 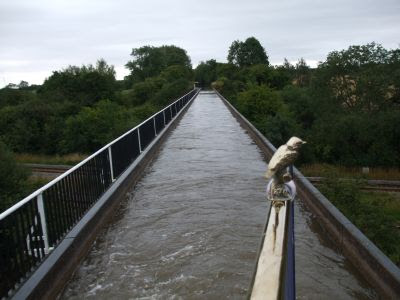 We passed under several of the tidy little accommodation bridges today, the two halves of the deck cantilevered out from the butresses, with a gap in the middle to pass the tow rope for horse boats. The design avoids the need to build a larger arch spanning the canal and towpath. 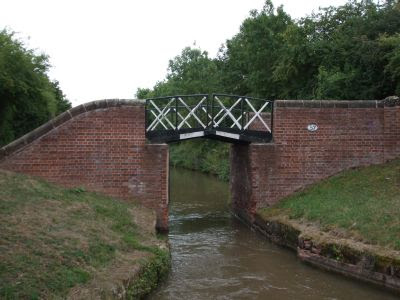 Plaque on Wootton Wawen Aqueduct, another but shorter iron trough. We moored just past the aqueduct, opposite the Anglo Welsh hire base. It’s been busy there this afternoon, Friday must be one of the change-over days.
They also have a couple of day boats for hire, one of which nearly came to grief when he saw us coming this morning. The steerer over compensated and sent the boat into the bushes on the offside. 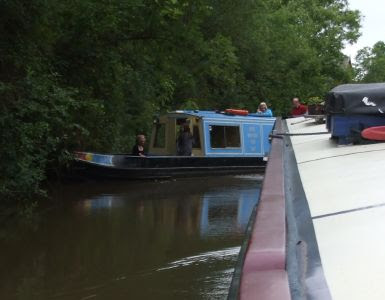 I pulled over onto the towpath side while he sorted himself out. The family were laughing about it, but he was a bit embarrassed.

I took a stroll up into the village to collect our post. The Post Office is located in what might have been a coach house for Wootton Hall

Wootton Hall, the PO is around the side. 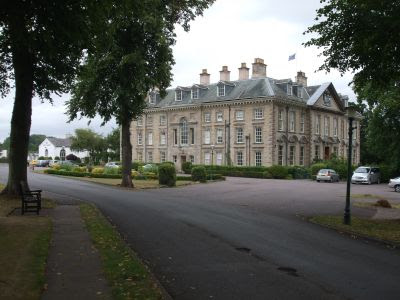 The Hall’s grounds are now home to a large static caravan park, the 17C main building now flats and a bar/restaurant.

Alongside the hall is St. Peter’s church,

St. Peter’s
This is the oldest church in Warwickshire, incorporating parts of an 11C structure. There was an even earlier wooden building here, dating back to the 8th Century.

We had a couple of hitch-hikers today…