I didn’t post last night. We had such a stupendous thunderstorm with lightening and torrential rain that I thought it prudent to unplug my roof-mounted internet aerial.
No aerial, no internet, especially not in this area.

Yesterday started dry, but that soon changed, with showers moving in. Just down from where we’d moored there’s an odd looking boat called Orca. Not sure what the purpose behind the design is, there are small portholes in the waist, and a pretty rotten plywood “cabin” in the middle. 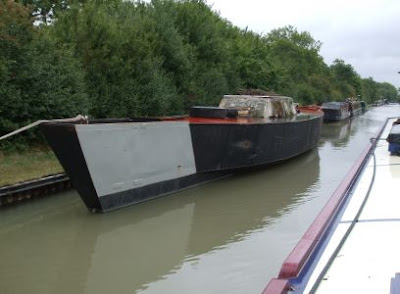 We were about an hour from the bottom of the three locks at Calcutt, and arrived in a very heavy shower. We could see a boat just going up, so I shut up the back and of the boat and had a walk up to see if anyone was coming down. Looking for an excuse not to lock in heavy rain, really.

There was no-one in sight so I emptied the lock and the rain stopped! Mags came up and we were up the first before the next shower.

There was a boat coming down by this time, so we waited for them to come down the lock, emptying it ready for us.

Then we proceeded up the last two, still with only a bit of light rain to accompany us. 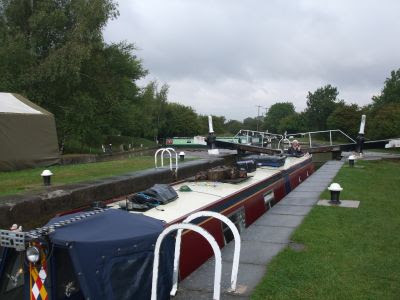 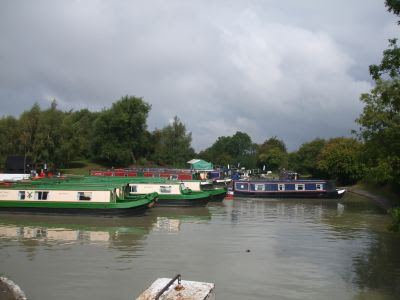 As soon as we cleared the locks Mags went back inside as another heavy shower passed over.

There were very few boats on the move on the Grand Union, just the odd hire-boat. But that all changed when we got to Napton Junction and turned left onto the Oxford Canal. 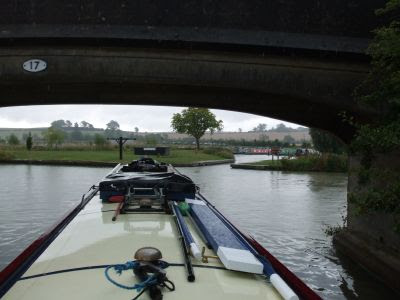 We must have passed two or three dozen boats heading south in the 2½ miles before we stopped, and the procession continued till early evening, more so now because we could see boats going in both directions. 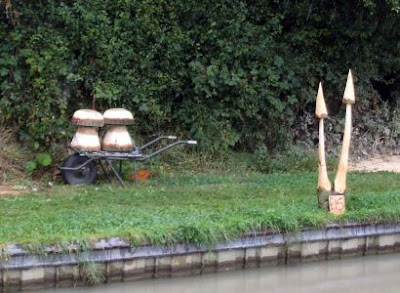 The lengths of piling between bridges 103 and 102 are very popular. There was a whole row of boats along here last night, including our friends Bill and Ginny on NB Wilvir, 10 minutes away. I stopped to have a chat while out with Meg. They’ve had visitors today, but we’ll pull over on the way to Braunston tomorrow to see them.

After my long run and then a long walk with Meg, we had a blitz in the boat hoovering, cleaning floors and polishing, then crashed out for the rest of the day.
It’s been a fine day today, dry and sunny for the most part. Busy again on the water.

Don’t know what we’re doing tomorrow. Definitely going into Braunston, but whether we’ll stop there or push on we’re not sure. I need to visit the The Boat Shop to get an aerial adapter for my internet dongle. I’m using an office card plugged in the card slot on my old Toshiba, and this has an aerial connector. My USB dongle doesn’t, and I don’t like to dangle it out of a window. So being able to connect it to my existing roof aerial would be a big bonus. My laptop is getting more and more flaky, and most new ones don’t have a card slot, so I need to find a solution for when I bite the bullet and replace the old girl.