Down the Wooden Hill.

Yesterday’s weather was decidedly grim, showers on and off for most of the day. So we stayed put, and I changed the oil and filters on the engine and gearbox.

Today was much better, warm and sunny first thing when I was out for my run, so it was pull pins and head off down the locks as soon as I’d taken Meg out for her morning constitutional.

NB Sogno arrived yesterday afternoon in a heavy shower, no sign of life this morning as we passed. 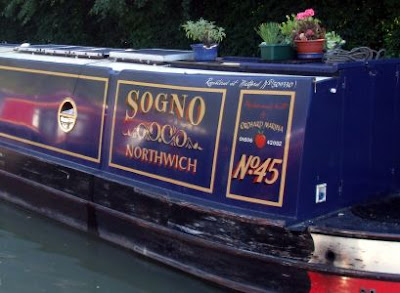 This is another Orchard Marina boat, maybe 3 years older than Seyella.

We were lucky to arrive at the top of the locks at the right time, able to start down straight away following a couple of boats already in the flight.

Fine view of the Leicester plain from the top lock. 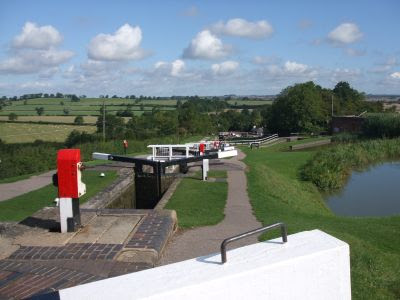 Inevitably, it being a fine Sunday during the holiday season, there were lots of folk around. I reckon I explained the fundamentals of lock operation at least four times.

I was helped with the gates by a family from Germany (I think), so I only had to work one side and we made rapid progress.

Midway down, a short pound allows boats to pass. 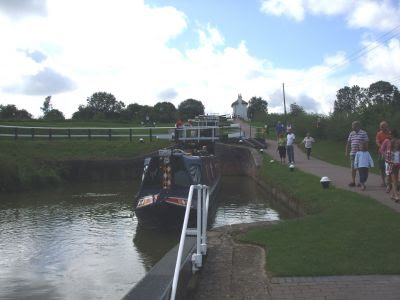 In either of the 5 lock staircases, once a boat is in the locks, another boat cannot pass in the opposite direction. The operation is usually controlled by lock keepers during the season, and they allow 5 boats in each direction at a time.

At the bottom, our helpers said cheerio. I’d bought the kids an ice cream tub each as payment. 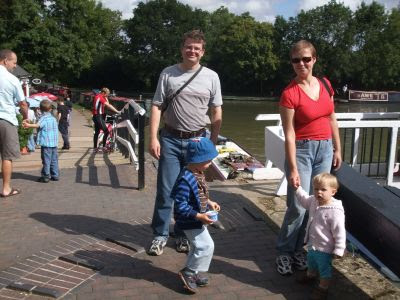 There were a few boats waiting to go up by now, including the hotel pair Snipe and Taurus. They’d just collected a party of guests in Market Harborough and were off onto the summit level.

Snipe and Taurus manoeuvring for the bottom lock. 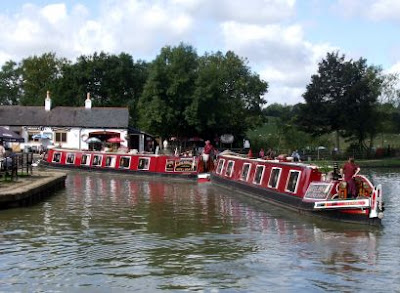 We filled and emptied as required at the new swing bridge, then turned around and headed out of the bustle surrounding the junction.

It’s always a bit chaotic here during the boating season. Hire boats based at Union Wharf in Market Harborough are arriving on the main line, either to go left up the locks or right towards Leicester. Then there are the boats already on the main line, as well as a couple of Foxton Boat Services day boats and the trip boat MV Vagabond. 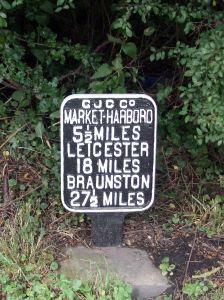 All of the 48 hour moorings were occupied, but we found a bit of bank space just past the footbridge.

Two more easy days to Kilby Bridge, then the run through Leicester. We usually stop at Kings Lock near Aylestone to break the journey, but may decide to push straight through in one go this time.