Up onto the “Dukes Cut”

Yesterday started moderately calm but the wind steadily increased though the day, making navigating a little challenging at times. Most of the trip we were reasonably well sheltered from the blow, though.

A stop at the services to fill and empty, and then we were off, past the moorings at Anderton, relatively quiet now the Easter week has all but finished.

NB Lacewing waits for lift passage on the holding moorings 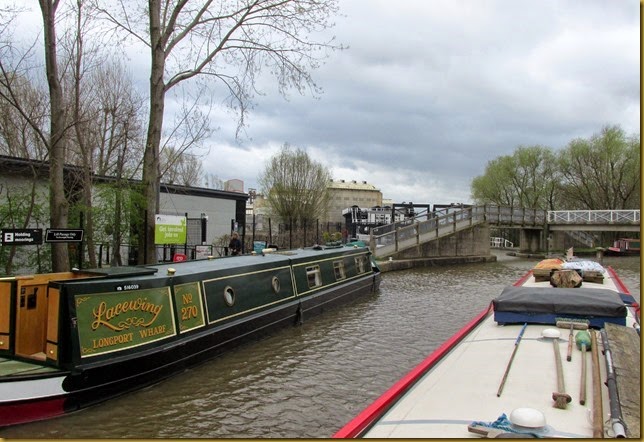 Heading towards the first of the two tunnels the canal runs on the valley side above the Weaver. The slopes are covered in wild garlic, aromatic now but even more pungent when the flowers appear. 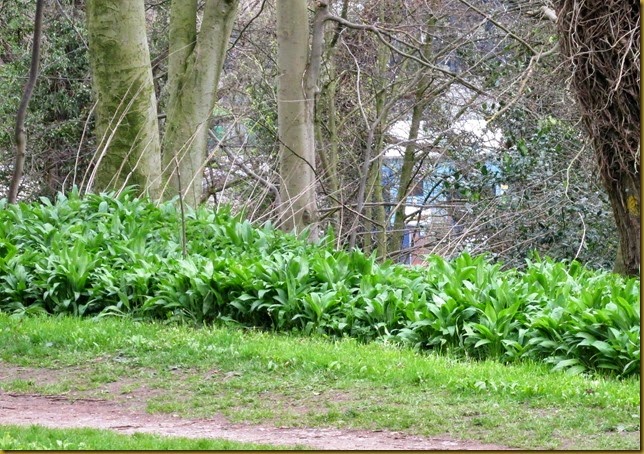 There’s a sharp turn to negotiate under Bridge 201 before entering the basin at Barnton. Some perversity on the part of the surveyor for Barnton and Saltersford Tunnels has put them on a skew to the run of the navigation, meaning that boats have to swing wide to line up, and oncoming traffic is not visible till the last minute. 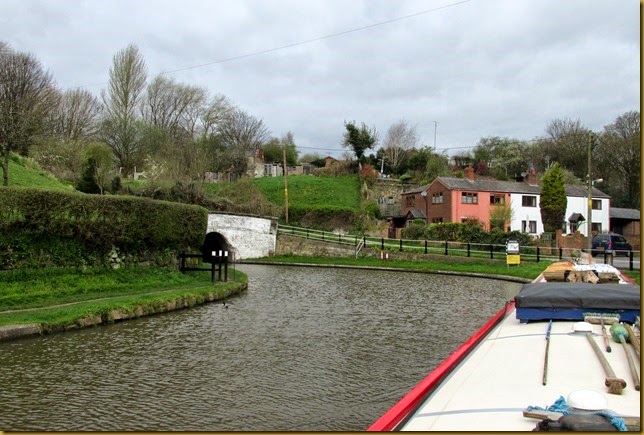 It’s the same at the other end, only in the opposite direction.

There’s a wide basin between the two tunnels, once again the portal for Saltersford Tunnel is discreetly tucked around the corner… 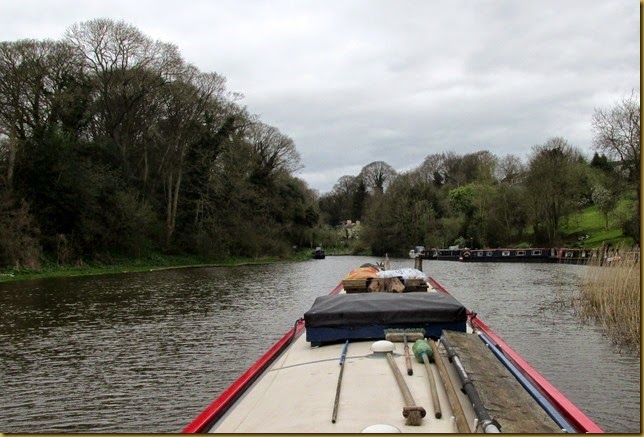 …just behind that moored boat on the left. At least there’s no worry about encountering oncoming boats in this one, for the last five years there’s been timed passage restrictions in force. Before that you just had to take a chance. The bore has an S bend in the middle (the result of less than inspiring surveying) so you can’t see through it till you’re already well in.

Out of Saltersford and there’s another of those tree-girt sections clinging to the valley side, only this time it’s the Weaver, not the Dane. 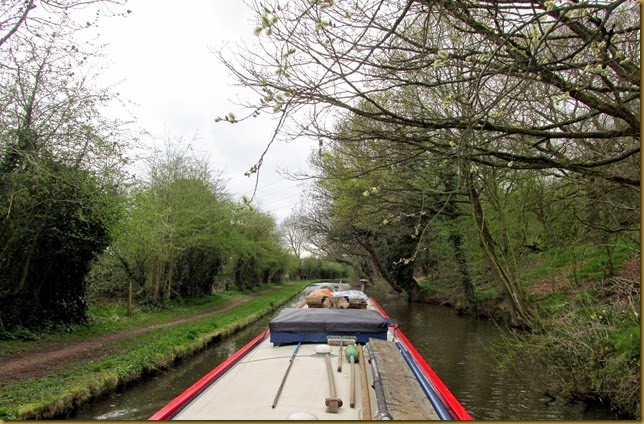 A host of golden daffodils… 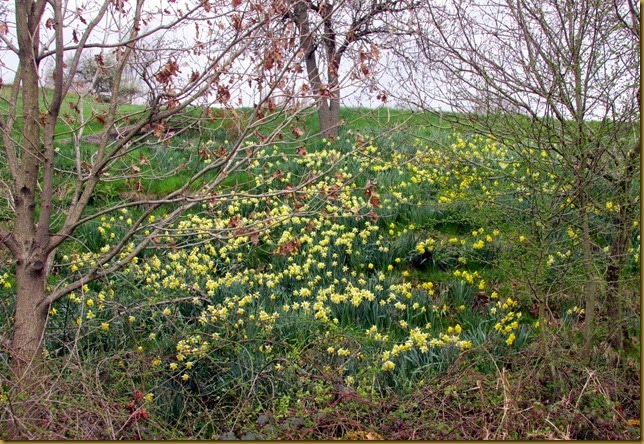 The Black Prince hire base at Acton Bridge seems to have most of the fleet back in this weekend. 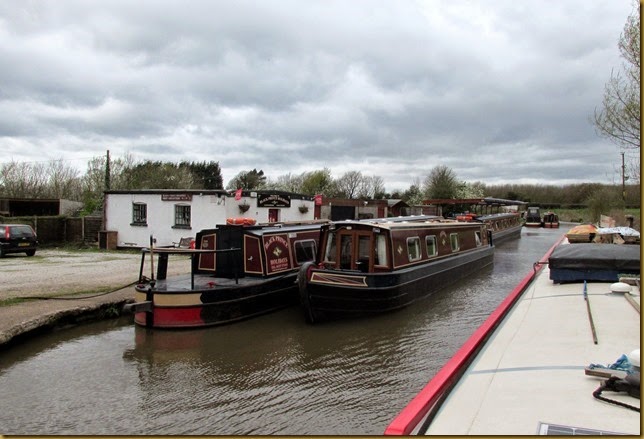 When our starter motor failed up on the Lancaster Canal I managed to source a second-hand one from here, and it’s still going (touch wood…). All the Black Prince boats at that time had Isuzu engines fitted.

The canal continues to traverse the valley side, giving views across to Dutton Locks down on the river. 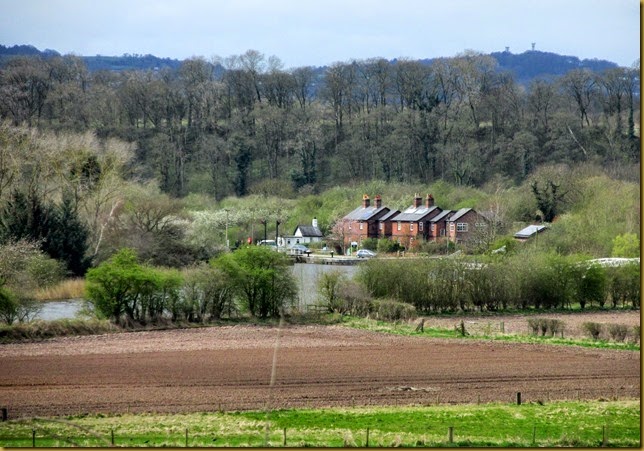 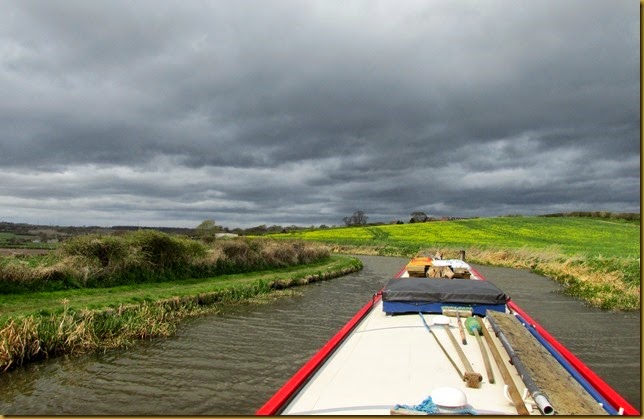 …but we were only ten minutes away from tying up on the “breach moorings”, at Dutton Hollow, where a catastrophic collapse of the bank dumped the canal into the pastures below and took several months to repair. 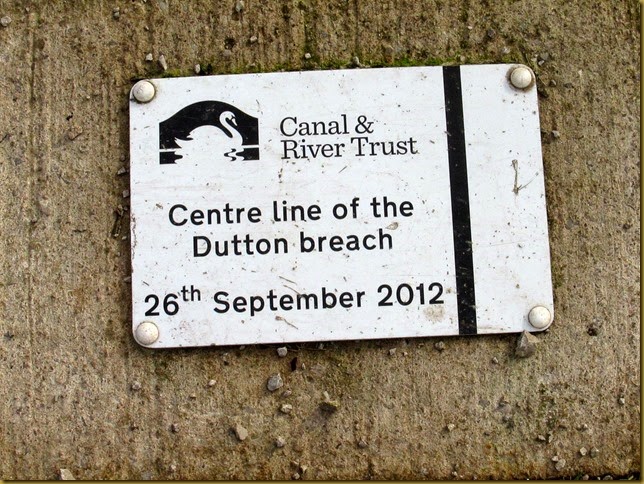 Although the wind was from the west it seemed to be deflected up and over the canal at the moorings. what  expected to be a difficult manoeuvre turned out to be a doddle. But it started to rain almost immediately.


The rain eased by evening, as did the wind,
leaving us a clear, frosty night. 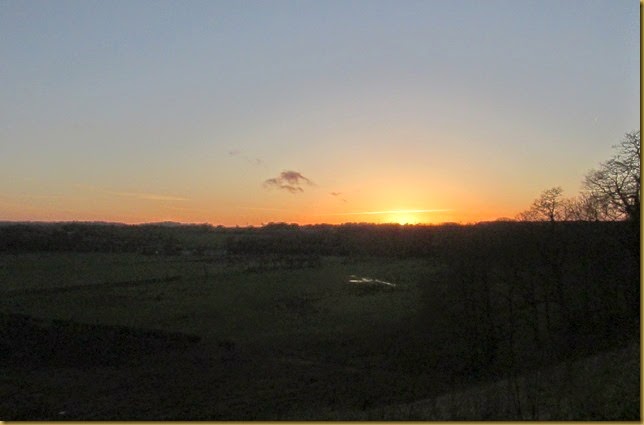 Today has been fine, not much in the way of sunshine but when it did appear it was warm. Still a bit of a nagging breeze, though.

Looking out across the valley this morning

Preston Brook Tunnel, like Saltersford, has timed passage. Northbound boats can enter on the hour and up to 10 minutes past. With only a mile to go we left the mooring at 10:25. That gave us an 25 minutes to get there, 5 minutes to negotiate the very shallow stop lock and 5 minutes contingency time. 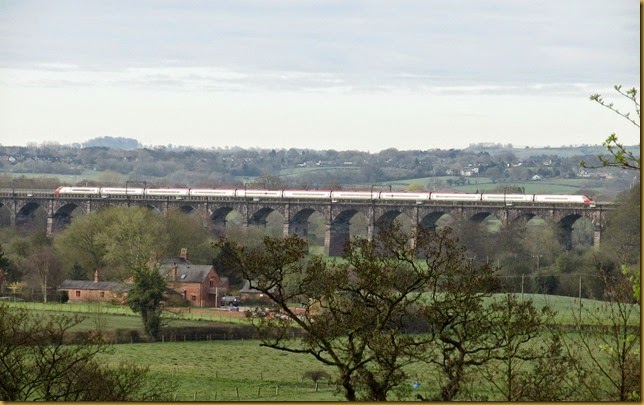 Dutton Dry Dock always seems to have plenty of boats around, but not much in the way of activity… 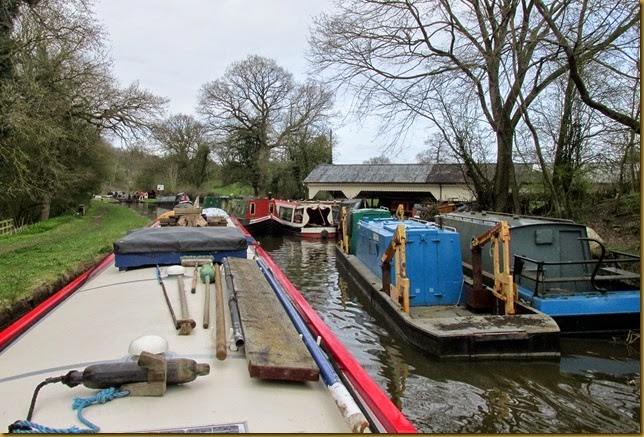 Through the stop lock and we joined the end of a short convoy of boats entering the tunnel.

Finally, one you can go straight in to! 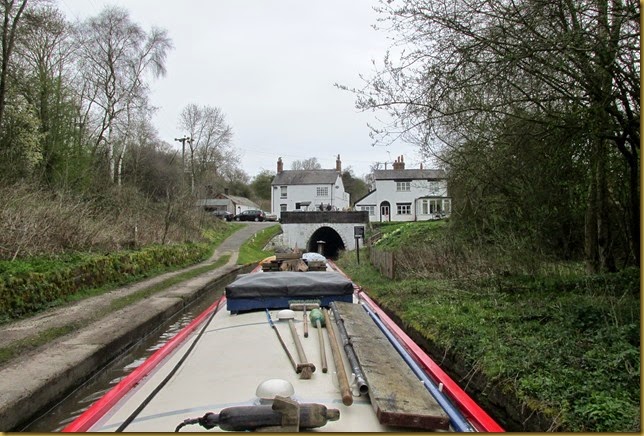 We had a slow passage. My tunnel light had somehow developed a droop. It did a magnificent job of lighting up the fore-end, at the expense of the tunnel walls. Consequently it was a bit of a blind grope through the 1239 yard long bore. Still, we got out after around 15 minutes with only a minor contact with one wall. The light is fixed now…

There’s a short link canal which was built in 1766 to link the Trent and Mersey Canal to the Bridgewater. The Bridgewater, or Dukes Cut, was built in distinct phases. First the original main line from the Duke of Bridgewater’s collieries at Worsley to Castlefield in Manchester was opened in 1761. From Water’s Meeting north of Stretford a branch was constructed to Runcorn, connecting with docks on the River Mersey via a flight of ten locks. The Enabling Act also allowed for the link to the Trent and Mersey at Preston Brook. The third major change was the extension of the canal from Worsley to meet the Leeds and Liverpool Canal Leigh Branch. This was completed just before the turn of the century, and gave the canal access to the northern wool towns and Liverpool.

Under Preston Brook Bridge, Claymoore  Navigation’s boatyard on the right and the M56 crossing ahead. 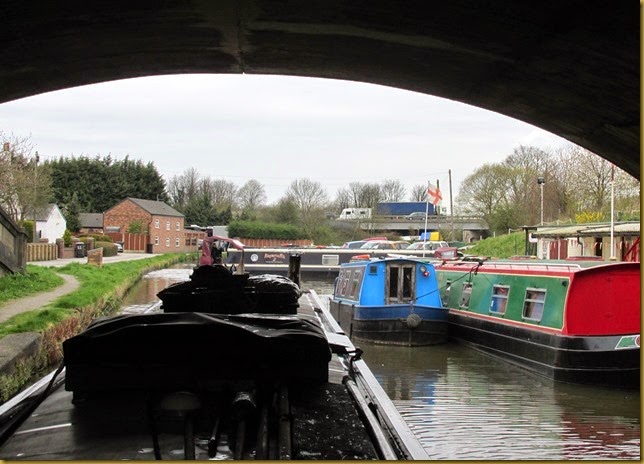 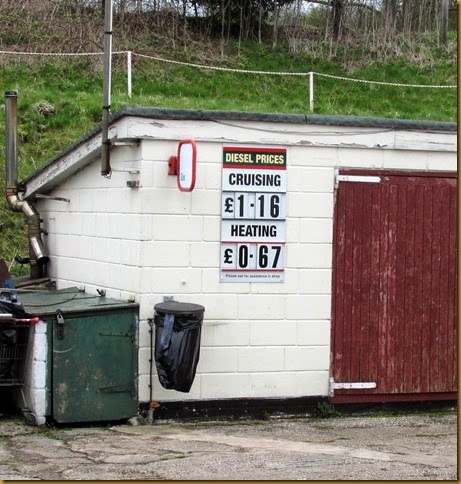 We pulled in at Midland Chandeliers where I believe I showed commendable restraint, only parting with £5.55 for a brass cabin hook and a couple of bulbs.

Then it was out onto the wide open spaces of the Bridgewater. In the first mile there are three obvious landmarks. 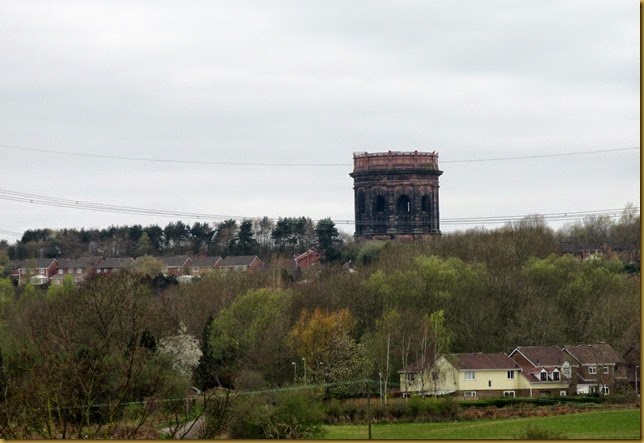 Fiddler’s Ferry power station, steaming gently away on the other side of the Mersey estuary, 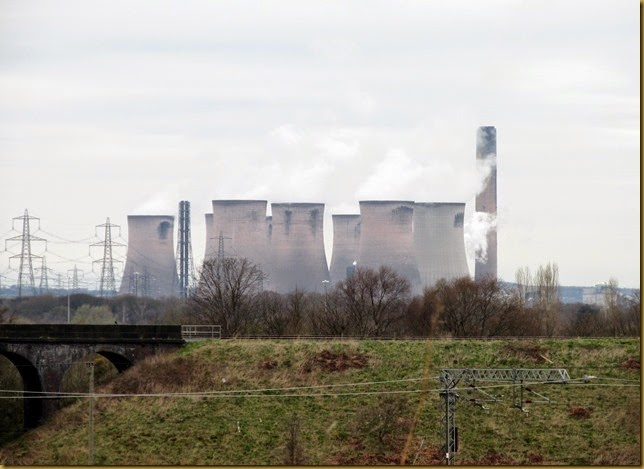 and the Daresbury Laboratory’s tower, built in the ‘70s to investigate nuclear structures. 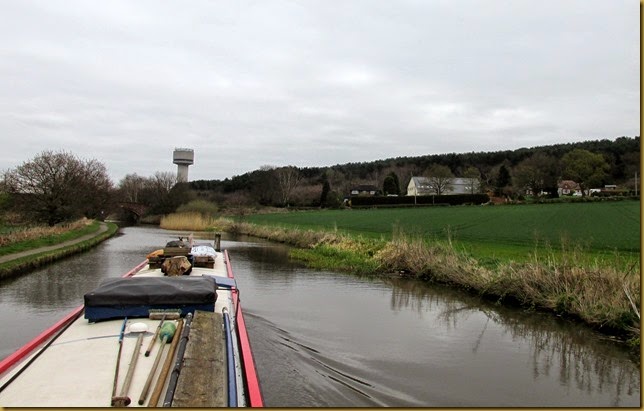 Over the wooded hill is the village of Daresbury, where Charles Dodgeson grew up, the son of the parish priest. “Who?” I hear a cry… Better known as Lewis Carroll, he was lecturing in Oxford when he wrote about a little girl called Alice…
It’s worth a walk up from the canal to the church, there are stained glass windows depicting scenes and characters from Alice in Wonderland.

A little further on we pulled in at the village of Moore. While waiting for the Post Office to re-open I’ve fitted the replacement cabin hook, replaced a bulb in the left side (red) navigation light, straightened up the tunnel light and checked out the satellite TV system. I couldn’t get it working yesterday afternoon, I think the LNB was a bit wonky. Anyway I straightened the bracket, tightened it up and everything is fine again. We don’t often use it, it’s rare nowadays that we can’t get a decent picture on digital TV.

There was a letter waiting for me at the Post Office… 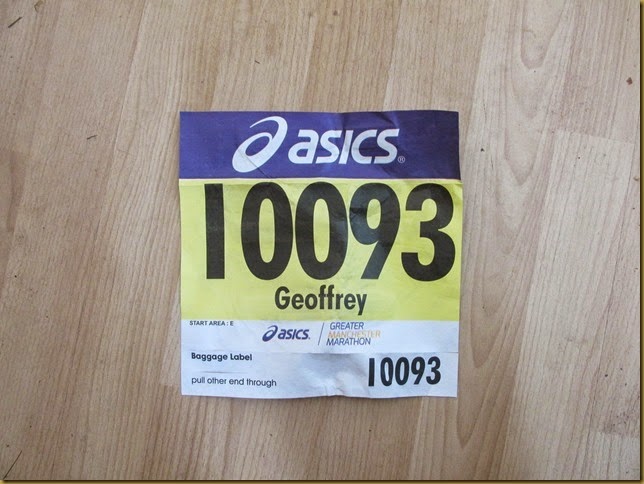 That’s me for Sunday, then.

If you’ve been putting off sponsoring me for this event, now’s the time to click on that button on the right… I need all the encouragement I can get!

Thanks, Ray and Jayne, for your contribution. Hope things are going well for you.

Hi Debby. Yes, looking forward to it now. Be glad when it's done, it seems to have been a long time coming. I've been training since last October!