Nursing aching legs as we head back out of the city.

Yesterday’s Greater Manchester Marathon was well organised, well attended and well supported by the locals. But unfortunately not well run by me.
I’d been nursing an injury to my heel for the last several weeks, anti-inflammatories, icing, and Voltarol Gel keeping me going through the training. I was hoping that the same regime would get me through the actual race but it was not to be. By the 20 mile mark the pain had reduced my speed considerably, the last 6.2 miles (10Km) taking an extraordinary 1 hour 25 minutes! Normally I could walk faster than that! I’ve run a 10k in 38 minutes in the past. Ok, so not after already doing 20 miles.
So instead of the planned for 4 hours, it took me 4:39. Disastrous.
But at least I finished… 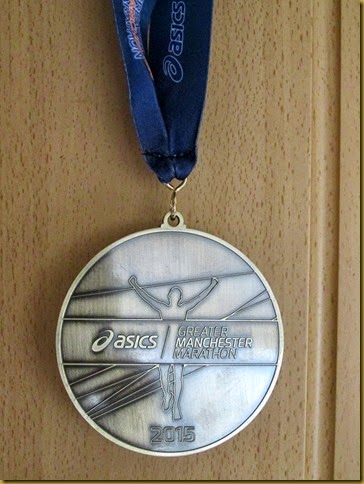 It was a slow hobble back to the Old Trafford Metro station and the return to Castlefield. Dosed up with Crabbies Alcoholic Ginger Beer and painkillers I slept well last night.
Yesterday evening I was saying never again, today, as the pain and memories fade, I’m saying maybe next year. This time next week… who knows? The running bug is very sneaky that way.

Thanks to everyone for their supporting comments and financial contributions to my fundraising page. I couldn’t have done it without you. We’ve raised nearly £600 so far, well done!

Anyway, we were up early this morning, dog walked (limped) and breakfast had so we decided to move out. We’d chosen to head back down the Bridgewater and onto the Trent and Mersey this being the easiest lock-free route. The alternative was up the Rochdale Nine, then up the 18 locks of the Ashton Canal, followed shortly by the Marple flight of 16, and onto the Macclesfield Canal. Not something I’d want to tackle at the moment!

Away from our mooring on Potato Wharf 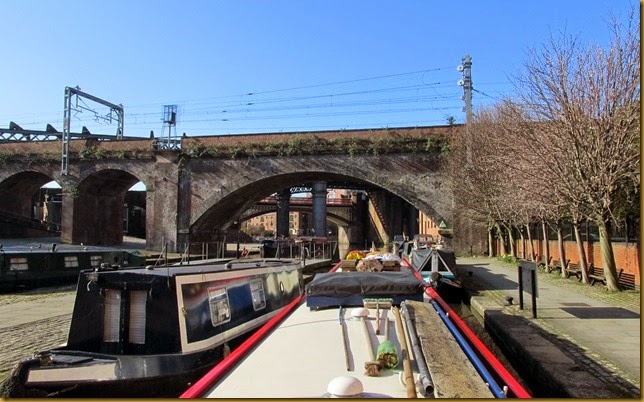 If you like railway bridges, Castlefield is the place to be! 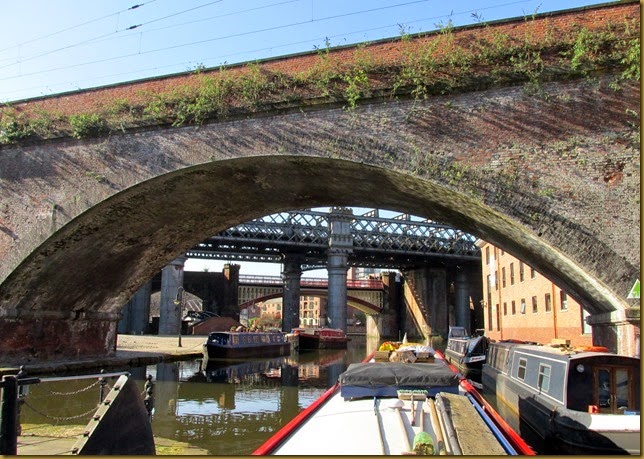 There are four crossing the complex of basins, the nearest and furthest built in 1849 by the Manchester, South Junction and Altrincham Railway. The tubular steel construction was built by the Great Northern Railway in 1894, and one just hidden by this (you can see the right hand brick support in part shadow) is an iron truss span from 1887 built for the Midland Railway. All are still in use apart from the steel 1894 one. The one you can’t see in the picture was refurbished in 1991 for the Manchester Metrolink.

Looking back at Potato Wharf 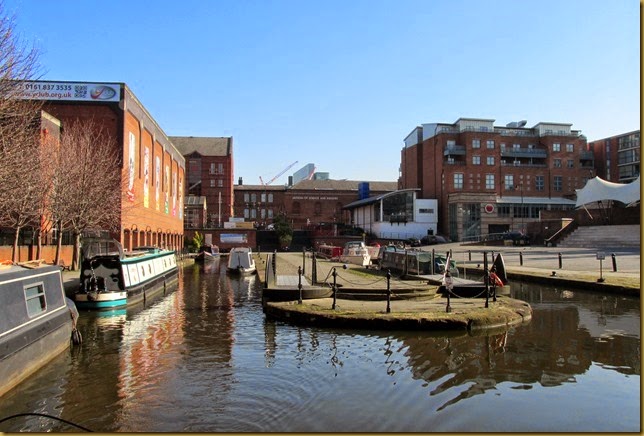 The Museum of Science and Industry is in the middle of the picture. 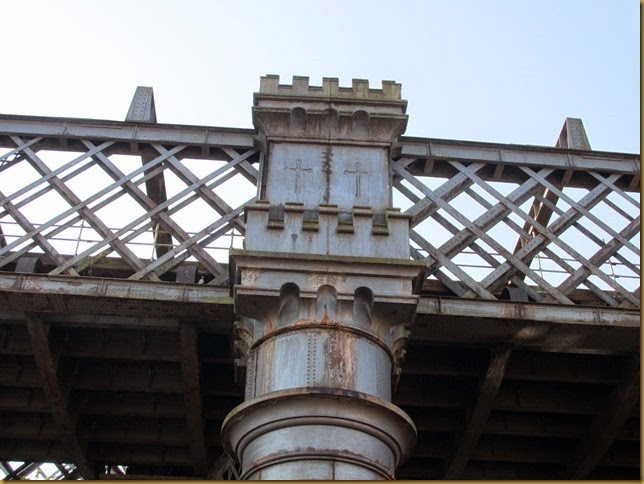 “Castle” themed embellishments on the bridges 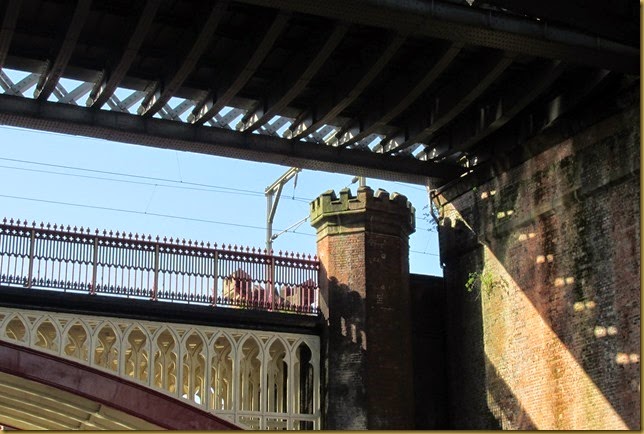 We’re under the 1877 Cornbrook Viaduct that now carries the metro.

The services were occupied, so we decided to push on rather than queue.

Out between the new apartments 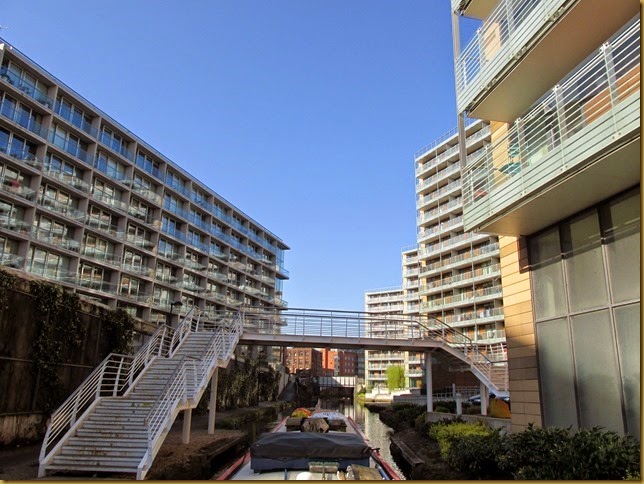 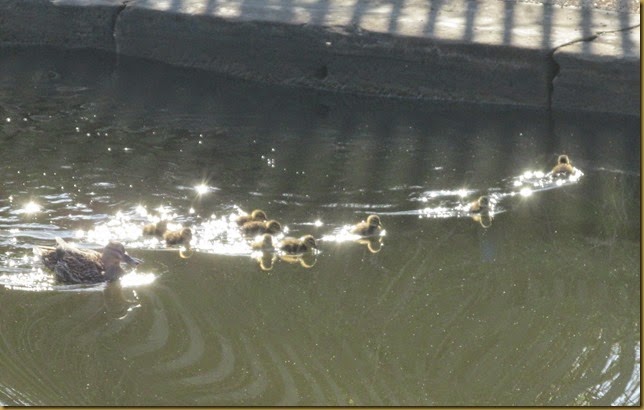 …and our first Canada goslings! 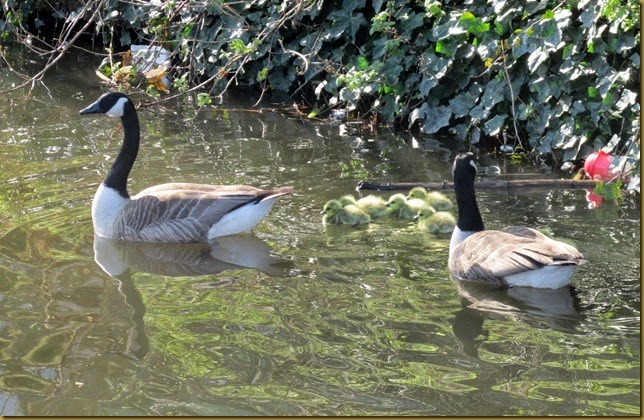 Been there, done that, got the tee-shirt! 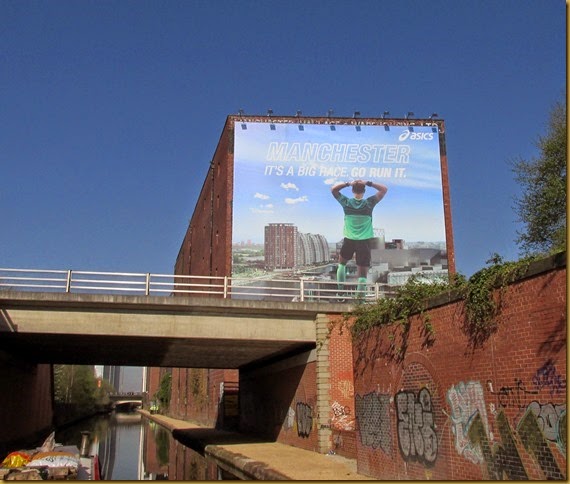 We had an uneventful trip back out through Stretford and Sale, out of the built up area at Seamons Moss Bridge and pulled in for water at The Olde No 3. 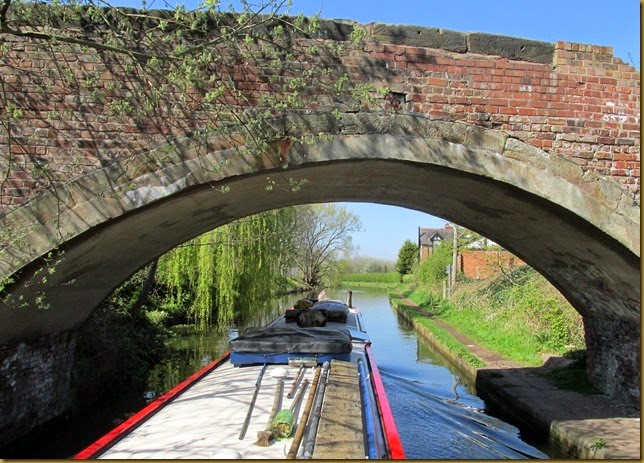 Michelle and Barry on NB Just Imagine were here, and we had a good catch up while waiting for the tank to fill. 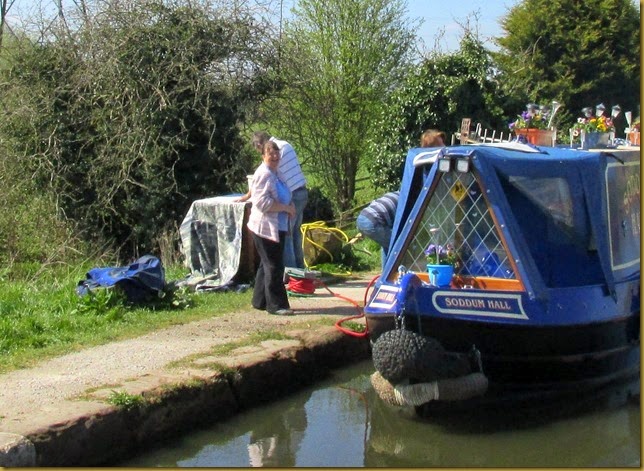 Another hour saw us coming into Lymm. We’d promised ourselves fish and chips if we could get a mooring here, but it was looking a bit dodgy… 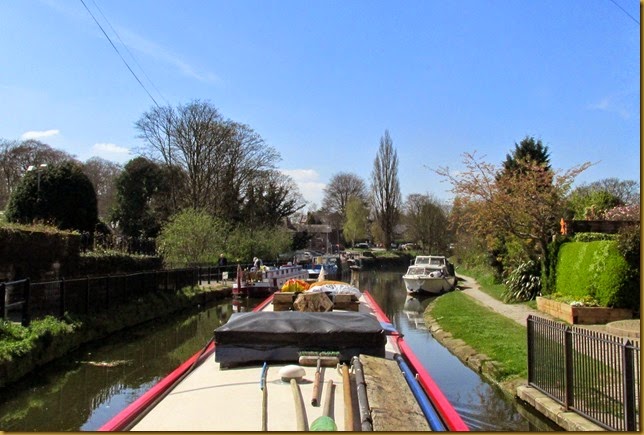 …we were lucky, just one space on the end on the left.

We’re on a bit of a mission now, with 2½ weeks to get to Nottingham and our rendezvous with the rest of the Wash flotilla. So tomorrow we’ll be off the Bridgewater and south of Preston Brook Tunnel, all being well.

Geoff, congrats on completing in spite of injury! (Some of us would be thrilled with that time ....) We will be coming up the T&M from Stone in a couple of days and will look out for you.
We've not been to Manchester before - what are the moorings like for walking dogs?
Best wishes for recovery!
Debby and Dave

You did it Geoff, the whole full distance :)
I doubt I could trot the last few yards, I certainly couldn't run... LOL

You did so, so well and you darn well knew what might happen as some of us did too and we were just hoping and hoping you would get to the end.. That you did.

You are a hero Geoff, there are very few people with that injury that would have got their hands on that fantastic medal.

Go steady now and do as little as possible.. Get the ball out for Meg or buy a squirrel toy and chuck it up and down a tree..

Not too much walking for a while please!