Off down the tidal Ouse

The tide times are not very convenient this week. We didn’t really want to be getting to Selby much before Thursday, but Wednesday’s and Thursday’s “windows” are either too early or too late. Friday would have been an option, only it meant leaving Naburn at sparrow fart. Then I’d have had to get a hire car and drive Mags to her doctor’s appointment on Friday afternoon. So we opted for today at 3 o’clock.

We filled and emptied as required, then joined NB Pearl in the lock. 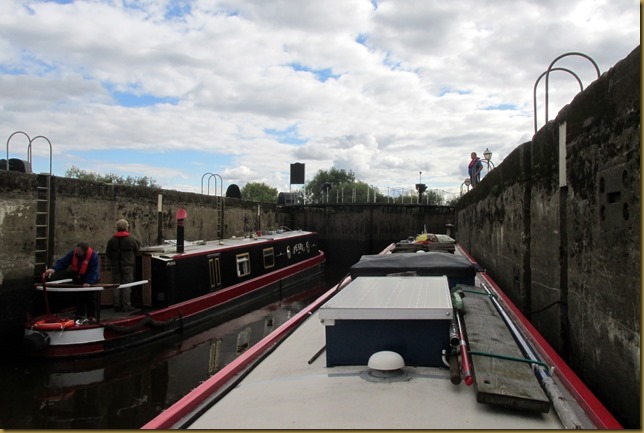 At twenty past three we were on our way, followed by Pearl 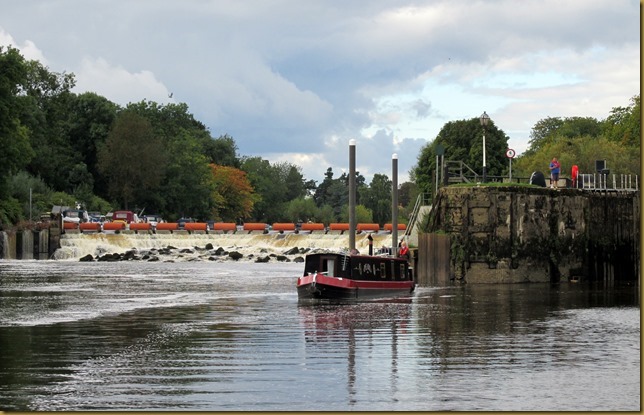 Nigel the lockie is seeing us off from the lockside. 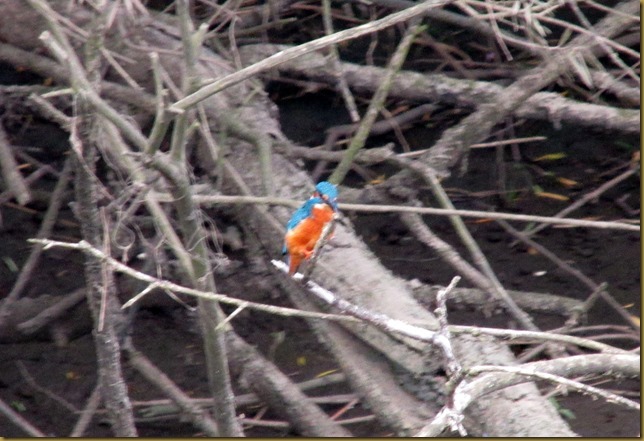 One of three spotted today.

At this time the tide is still on the flood, and will be for another hour. So we’re pushing against it as it’s stronger than the fresh water going downstream. The problem is that if you leave it to catch the ebb and be carried down all the way, there wouldn’t be enough water at Selby to get in the lock. Timing is everything… so they say. 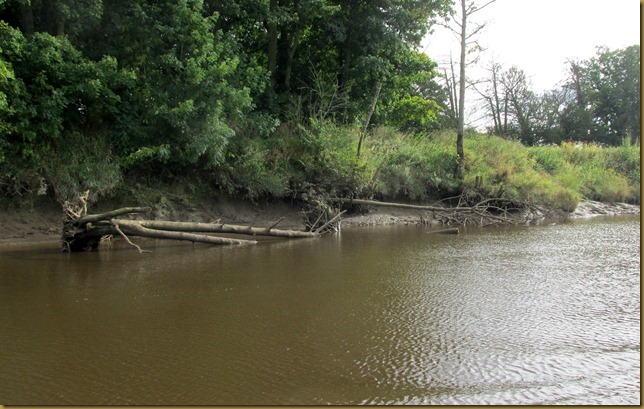 The day had started beautifully, clear blue skies and warm sunshine. But by the time we got going clouds had started to build.

They formed some impressive cloudscapes, though. 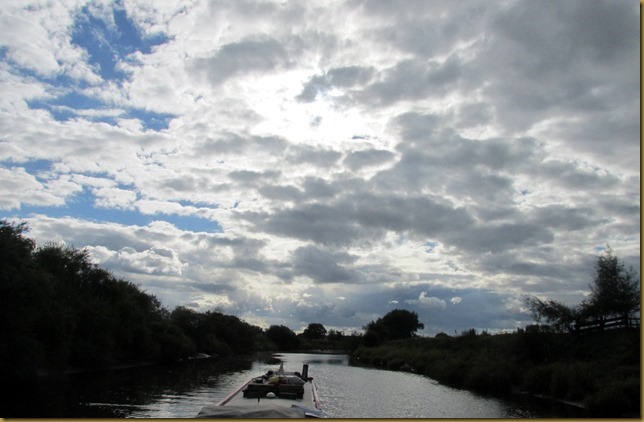 The sun made brief appearances and we had a 5 minute shower, but generally the weather was better than expected.

About 5 miles downstream the River Wharfe joins the fray from the west, then there’s the excitement of passing under Cawood Swing Bridge. 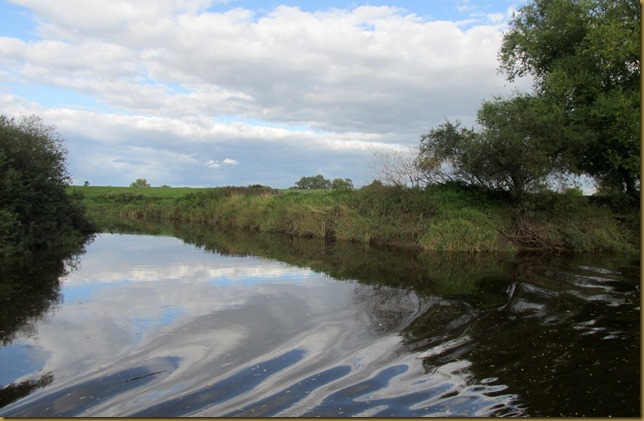 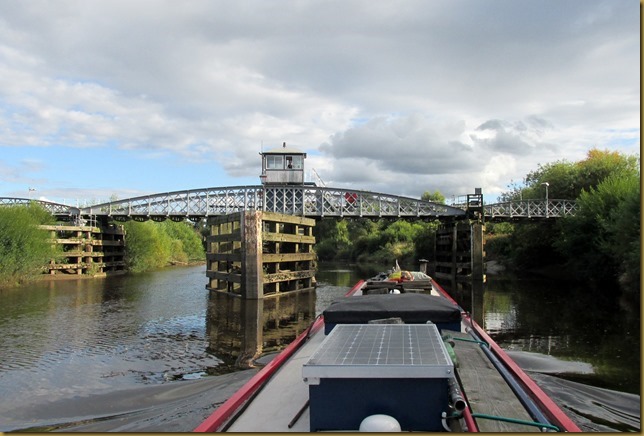 Give the bridge keeper a wave… He doesn’t have to open it for us.

Cawood All Saints Church, on the right bank as the river makes a sharp left turn here. 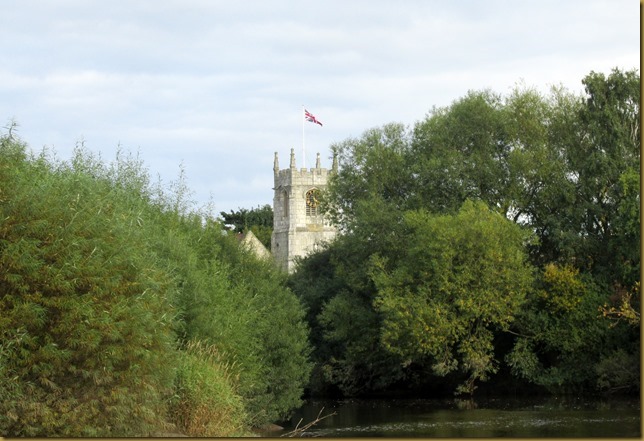 The river twists and turns as it heads towards Selby, but the general direction is always south-east.

Another tight right hander is just to the west of the village of Riccall.

The village is beyond those trees… 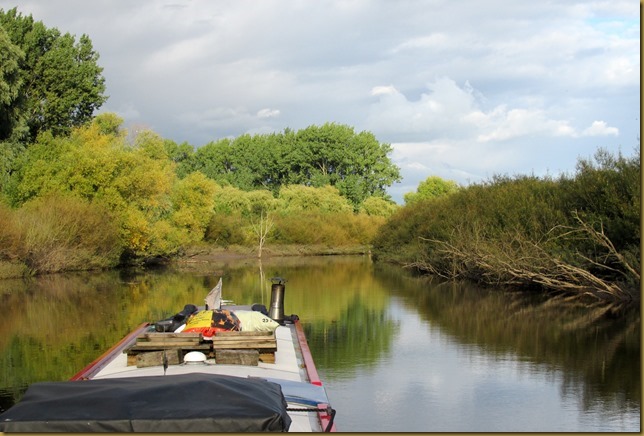 It’s here that Norse invaders, in the summer of 1066, left their longboats and advanced upon York, defeating a northern English army at Fulford on the way. The city surrendered and agreed to pay tribute.
The English King Harold was on the south coast waiting for the imminent arrival of another invasion force, led by the Norman Duke Guillam (William), and was forced to abandon his preparations and hustle north to deal with the Viking threat.
Having covered the 185 miles in just three days his small but efficient army took the Norsemen by surprise and routed them at Stamford Bridge. They had arrived in 300 longships, just 24 were needed to carry the survivors back down the river to the sea.
Just three days later the expected Norman invasion took place, and a knackered Harold and his men had to go all the way back again to the south coast. The rest, as they say, is history… 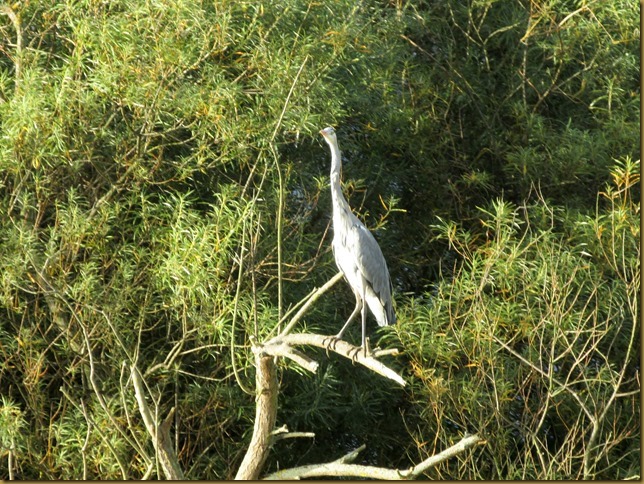 A bit of slalom work was involved to avoid floating rafts of branches shuffling up and down on the tide. 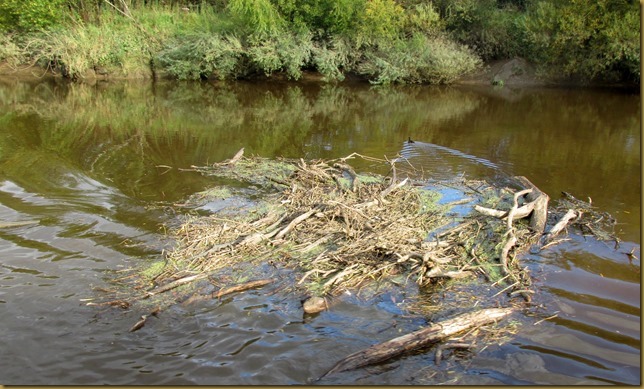 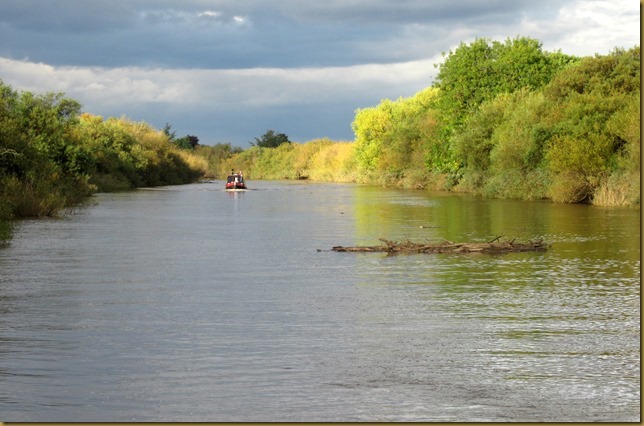 Sunny here but that cloud is looking a bit ominous! 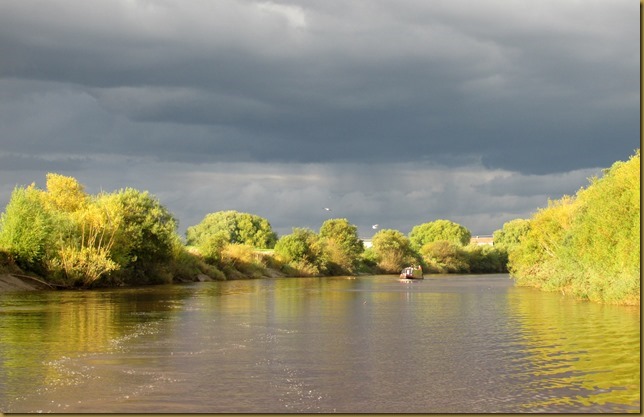 Nearly there now as we pass the large Rank-Hovis mill on the left bank. 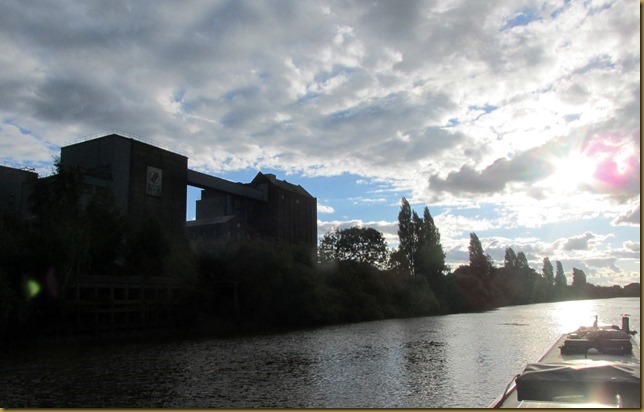 I gave the Selby lockie a shout on the VHF at this point to let him know we were on our way. You don’t want to get there and find the gates shut… 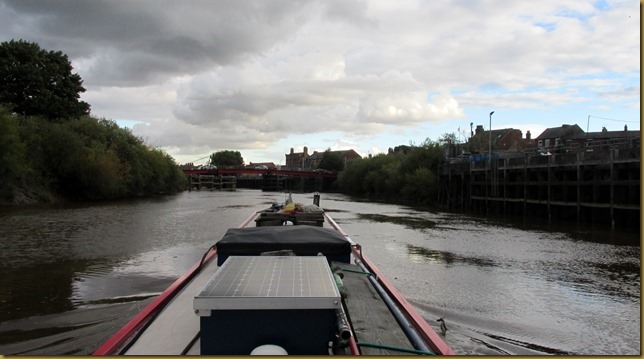 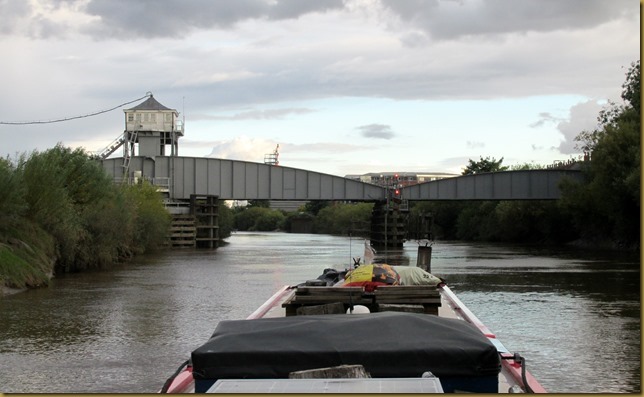 It’s a good job they put that sign there else you’d miss the lock completely! 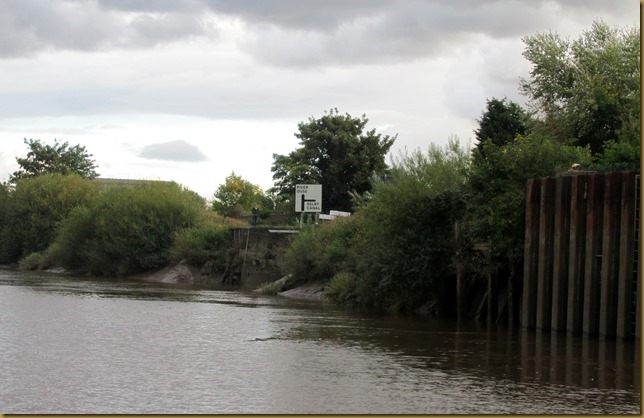 The next few pictures are courtesy of Aileen, from NB Quaintrelle. They came down yesterday, in rather damper weather.

Lining up to turn around… 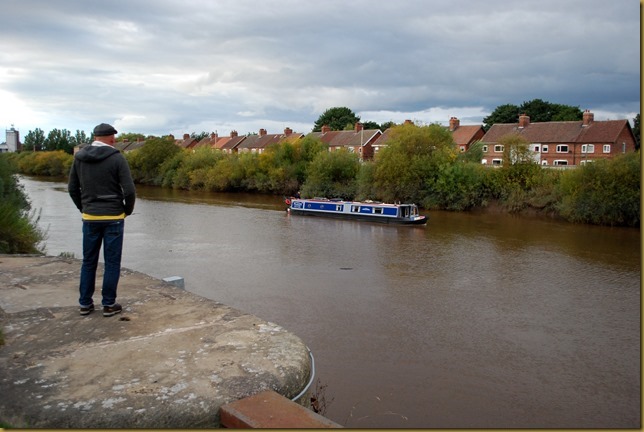 I left it a little late to turn and finished up 50 yards downstream. That’s OK, though, the plan was to come back up against the flow then turn in. But NB Pearl turned a little earlier…

After you…No, after you!... no really, you first. Oh, alright then! 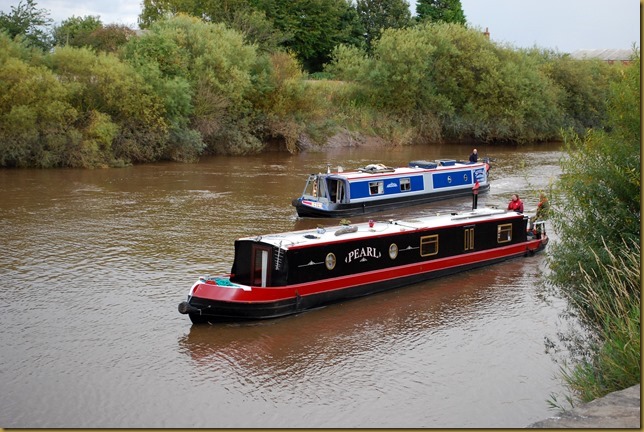 We did get both boats in, finally! 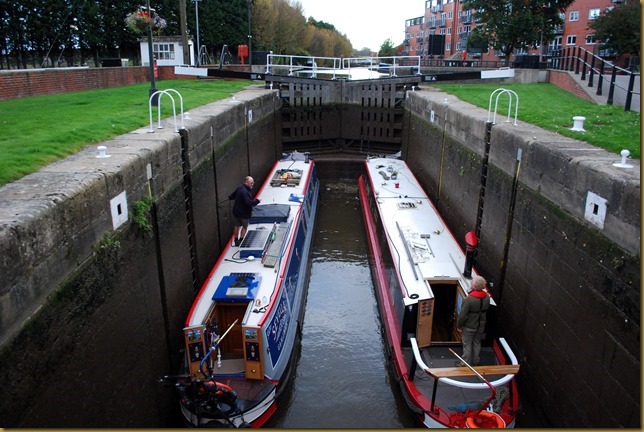 Thanks for these, Aileen! (I hope I've spelt that right...)

We both moored up in the basin, there’s plenty of room at the moment.

The trip took 3 hours, lock to lock. On some of the bendy bits upstream we were down to 2½ mph punching the tide, but that rose to around 7½ mph towards the end of the trip with tide on the ebb.

A few days in Selby, now.

Phew, well done Geoff. One of the difficult turns that into Selby Lock.

Our instructions were to turn at the previous railway bridge, I am sure you will remember it, and come down backwards from there to the lock then turn in!

There was already a boat in the lock when I had my turn.. A B&C was waiting for me on the dinette table once in!

Yes, you did spell my name right!! ;) Great to see your progress and enjoying reading the historical info on places we've passed but didn't know about...... No way is Mags 89!!?? Safe travels, Aileen NBQuaintrelle