The River Aire has long been navigable, in the 17th century boats were regular visitors to Knottingley, following the tidal river from it’s confluence with the Ouse at Airmyn. But local tradesmen were keen to see the navigation continued upstream to Leeds, and also wanted a link to Wakefield. Both were burgeoning industrial towns, desperate for the life-blood of manufacturing – coal.

After several failed attempts a Bill passed parliament to improve the rivers Aire and Calder, and by 1704 both rivers were navigable, the Aire up through Castleford to Leeds, and the Calder from Castleford to Wakefield. The Aire and Calder Navigation was immediately profitable, and improvements were made to improve the depth of water, and the Selby Canal was authorised to make an easier route to the Ouse than the lower Aire.

Selby became an important port, shipbuilding and wharfage and associated industries expanded.
But the section of the Aire from Knottingley to West Haddesley and the Selby Canal was still a problem, twisty and prone to flooding. So a proposal to develop Goole as an inland port, linked by a new canal from Knottingley, was accepted and implemented by 1826. Although an agreement was reached to maintain the Selby Canal as part of the scheme, inevitably it fell into decline and Selby lost it’s main source of income, as shipping started using the new docks at Goole.

The latest improvements saw the size of the locks increased to accommodate Euro-barges, 200 x 20 feet and capable of carrying 600 tonnes of cargo.
There is now no commercial traffic on the navigation, following the cessation of the oil tanker trade between Rotherham and Goole.

It was a misty morning when we set off through West Haddesley Lock and out onto the Aire. Mags swinging round to pick me up below the lock 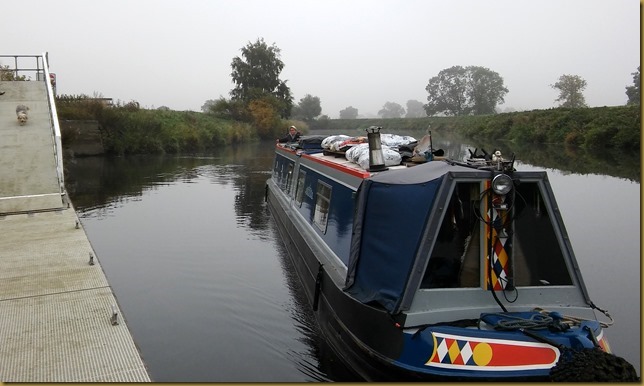 Passage through the lock was a doodle. With the river very low only the lower gates were closed, and they had one paddle raised to feed water into the canal. So I just had to open one gate and Mags steamed straight through onto the river.

The trip upriver to Knottingley was uneventful, we stopped above Beal Lock to fill with water and so I could wash one side of the roof. Before we left this morning I'd sorted out those coal bags, spreading the contents out into a couple of spare bags and stapling them up. Inevitably there was some spillage, and the roof was decorated with coal-dust coloured footprints. 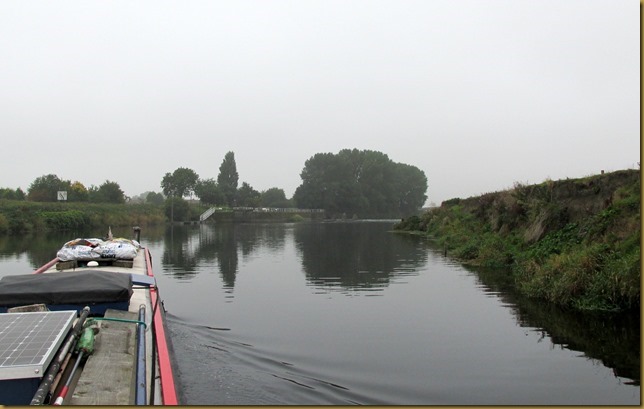 We had to wait at Bank Dole Lock; a cruiser had passed us at Beal while we were filling the tank and he was only just going in the lock when we arrived. So it took a while before we were up and through onto the Aire and Calder Navigation. 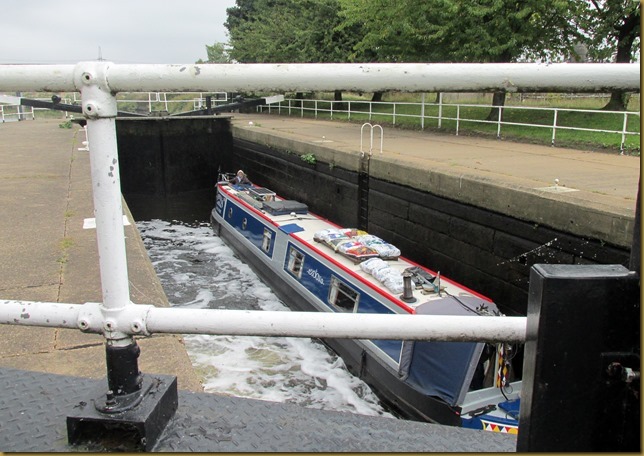 We’d hoped to get to Ferrybridge by half-one, in time for me to watch the Japanese Grand Prix, but it was this time when we reached Knottingley Junction. So we pulled in here instead. Last time we stopped on the “island” but today we pulled in on the main line opposite the junction. 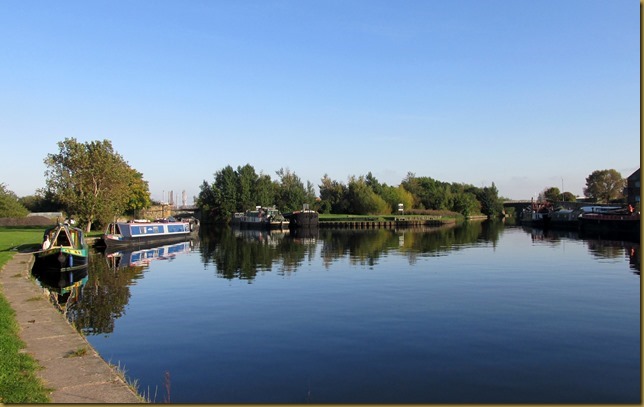 The day was beautiful by this time…

The wide expanse of water opposite the entrance to the route down to Goole (on the right) was to allow the large barges to make the turn, and I certainly wouldn’t have moored here if they’d still been about!

Our next stop should be Lemonroyd Lock tomorrow, but it’s looks like that’s out. There’s a problem with the lock at Castleford Junction, so we may as well stay here till we get an update. We’d planned to be in Clarence Dock on Tuesday for a visit to the Royal Armouries Museum on Wednesday. Might have to reschedule…

Hi Carol. No, not fairy lights - that's her halo! I think it's a reflection from the candles..

A halo indeed! Of course it was! xx

A halo indeed! Of course it was! xx

This is the area where my canal link comes from. My great grandmother's Sarah Hodgson's parents were both from boating families at Knottingley and Brotherton and worked along to Goole where my great grandfather Garland Freear lived. When Sarah and Garland later moved to Wakefield I assume they came on one of the boats.
They also named 2 of their children after family boats - Demarus and Sabina.
I also have boating relatives on my mothers side called Partington, but know very little about them