We’re in one of those autumnal high-pressure weather patterns that give us clear, cool nights, misty mornings and fine, sunny afternoons. Don’t get me wrong, I‘m not complaining!

Looking across to the glass factory last night. 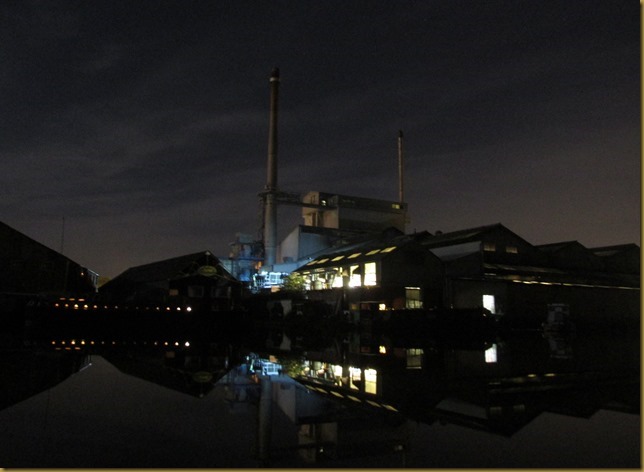 Unfortunately they work 24/7 and the fans are quite noisy! Still, you don’t notice them after a while…

We were moored in front of this old boat… 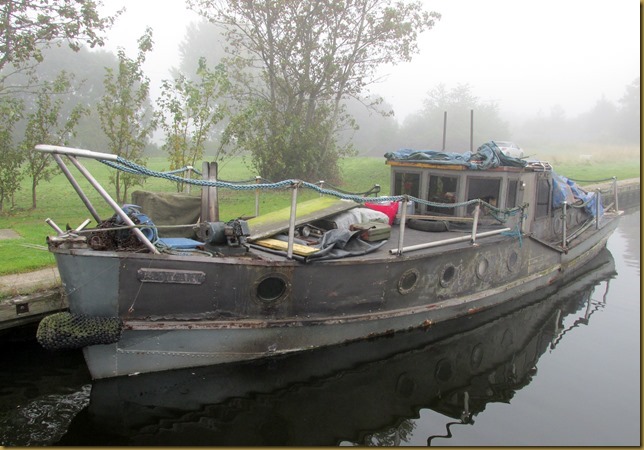 I wonder what she started life as? Fine lines…

The mist hadn’t made any effort to clear by the time we pulled pins and set off towards Castleford. 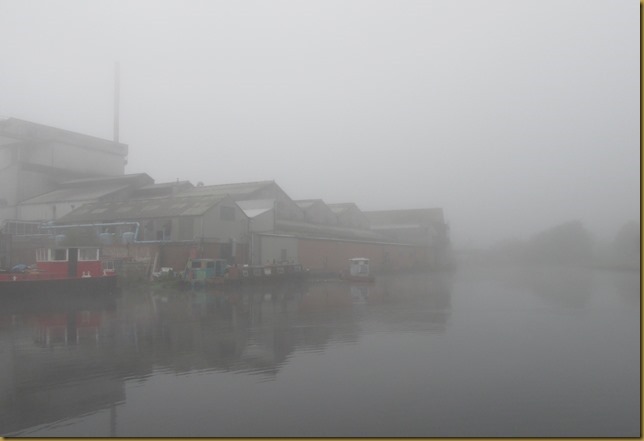 I’d rung C&RT to see if there was an update on the the stoppage at Castleford Lock, but apparently there wasn’t. But we thought we’d toddle on up there anyway.

It’s quite a pleasant cruise through Knottingley, especially now you don’t have to keep an eye out for large commercial boats on the bends!
Some of the cleared industrial sites on the canalside are now parkland. 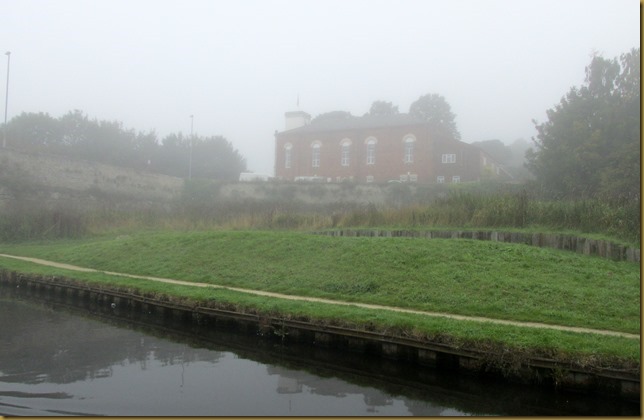 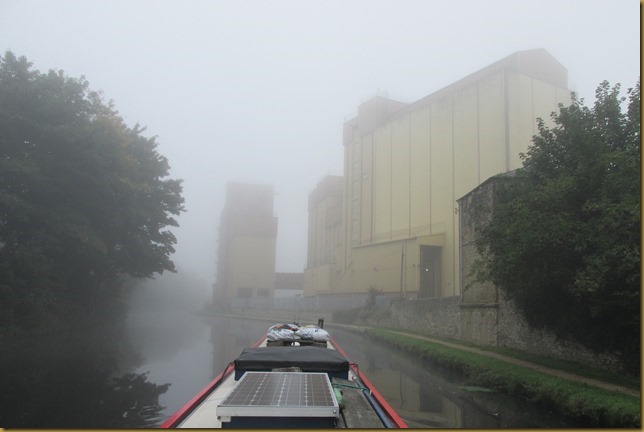 There has been a mill here since medieval times, utilising the fast stream of the River Aire as it splits around Willow Island just the other side of the present buildings. Until the Knottingley Cut was dug during the construction of the Aire and Calder Navigation, the mill owners controlled the water levels, often refusing passage for boats through the flash lock to preserve water stocks for their machinery. Of course, the coming of the canal was a god-send. Water for power on one side, water for transport on the other.

Coming out of Knottingley there’s a straight section ending at Ferrybridge Flood Lock, through which the navigation regains the river. With the low river levels I expected the lock to be open at both ends, but it was difficult to tell… 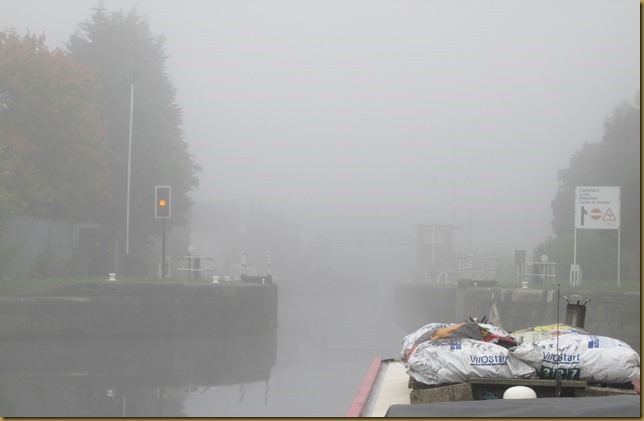 It was, and we emerged out onto the river. If anything it was even foggier here! 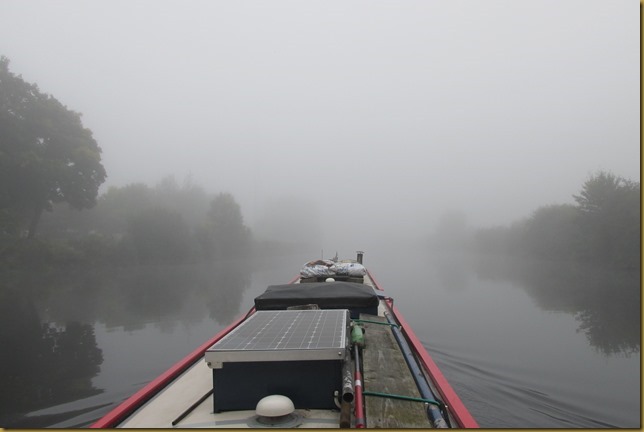 Bridges loomed out of the mist… 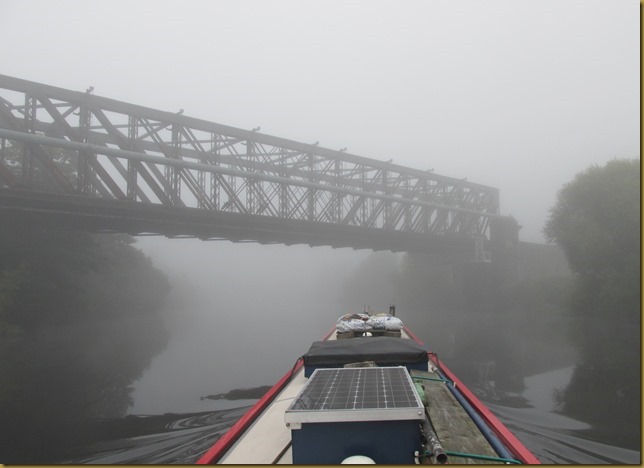 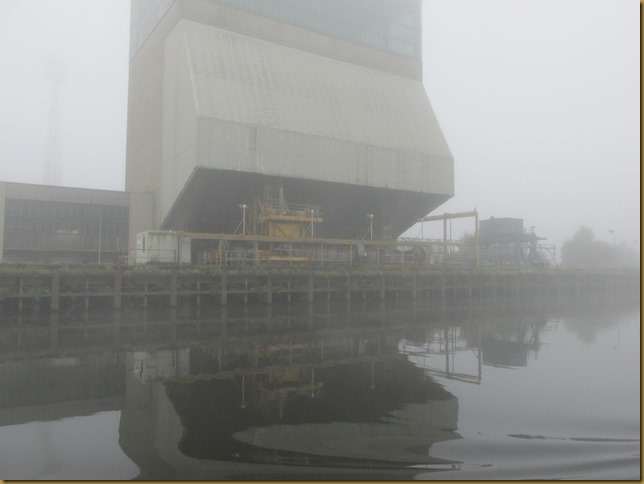 Now abandoned but for the cormorants drying their wings. 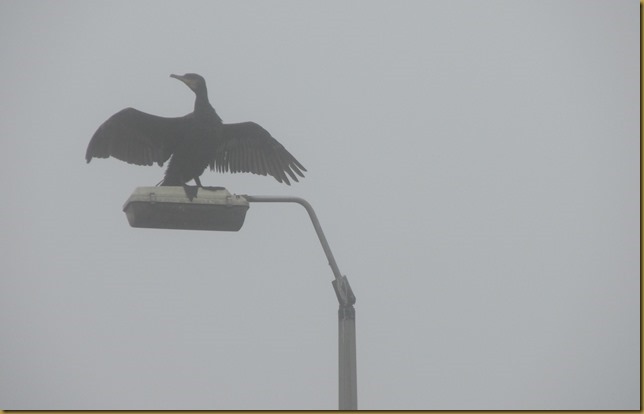 We weren’t alone on the river after all! 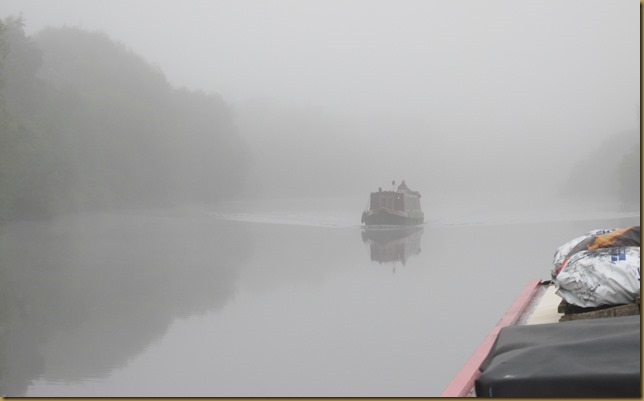 As we approached the end of the river section and Bulholme Lock the mist finally started to lift. 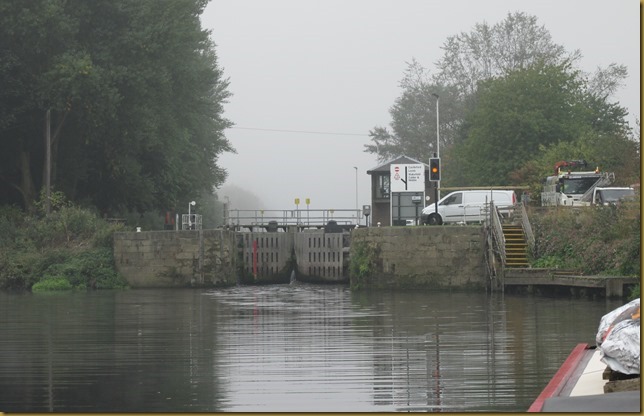 Lots of vehicles about but no lock-keeper. Boater operation indicated by the amber light. 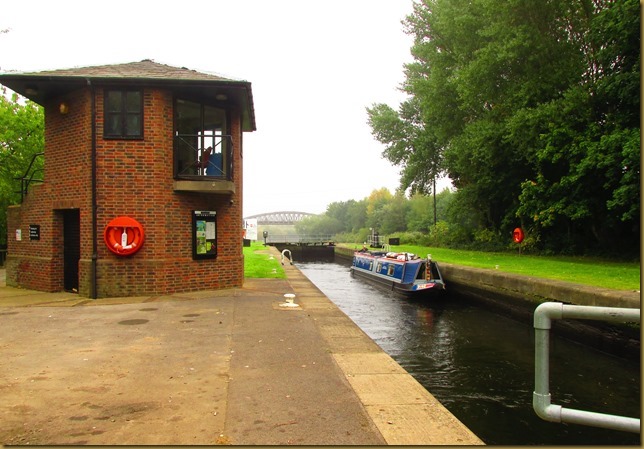 I checked my emails as we left the lock (useful, these smartphones) and was pleased to see that the stoppage at Castleford had been lifted, so on we went.

Castleford, like Ferrybridge, is a flood lock, so I wasn’t surprised to see it open at both ends too. 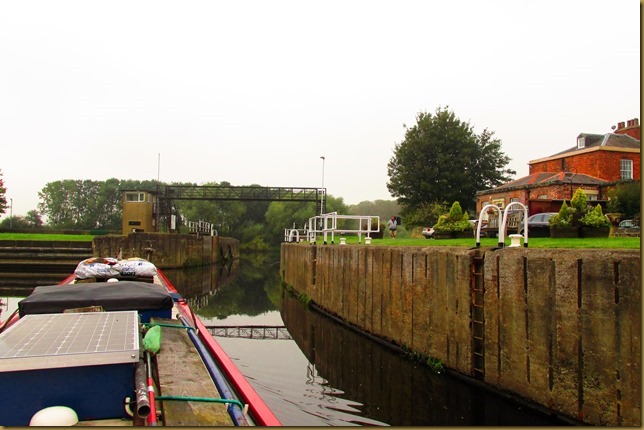 I wonder why the stoppage was applied in the first place? We saw no sign of any problems. Nor repairs, come to that.

Out onto Castleford Junction. 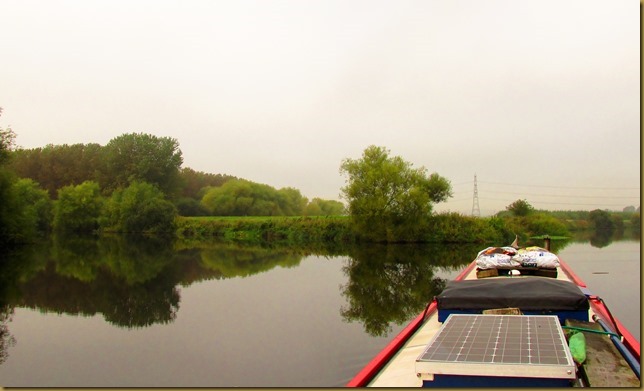 The Calder and Hebble is to the left, the Aire and Calder (our route) ahead.

Unusual for the river, good moorings next to The Boat Inn at Allerton Bywater. 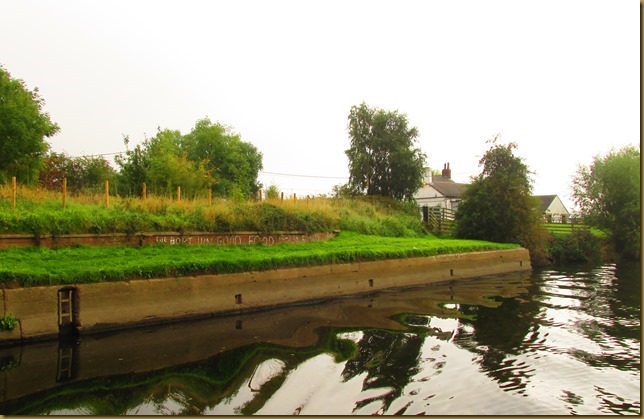 A little high for narrowboat decks, but if you’re desperate for a pint…

North of Mickletown there’s a wharf, presumably to service a colliery or gravel pit as the access road to it from the village is called Pit Lane. 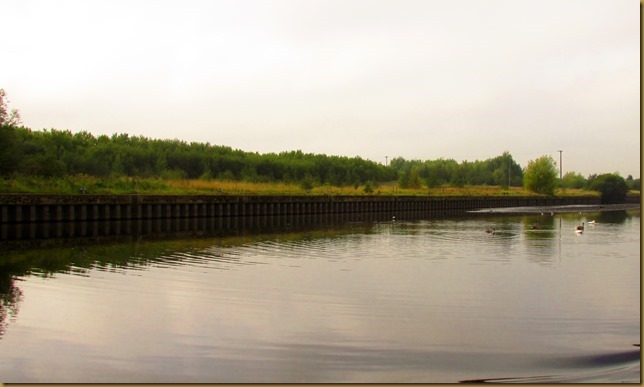 It’s not been used for a while, though… 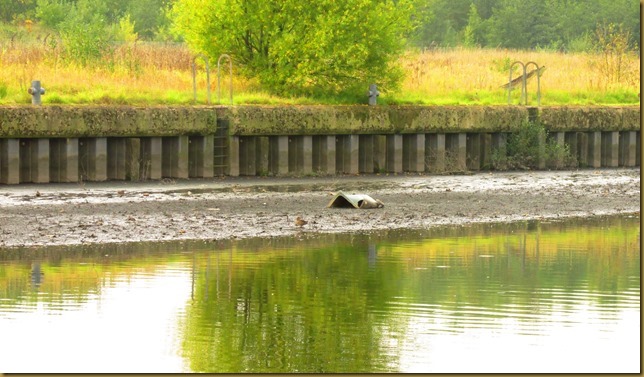 This river section ends at the very deep but delightfully named Lemonroyd Lock. 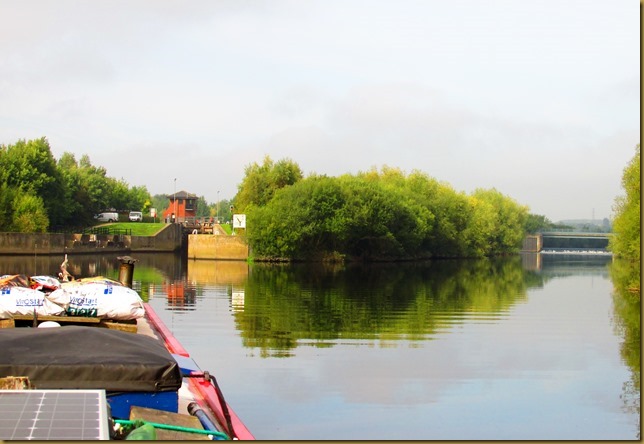 Following a disastrous breach during flooding in 1988 which destroyed the navigable channel as well as flooding the adjacent open-cast mine, the line of the canal was moved to the west and the two locks here replaced by one. Hence Lemonroyd Lock is 13½ feet deep… 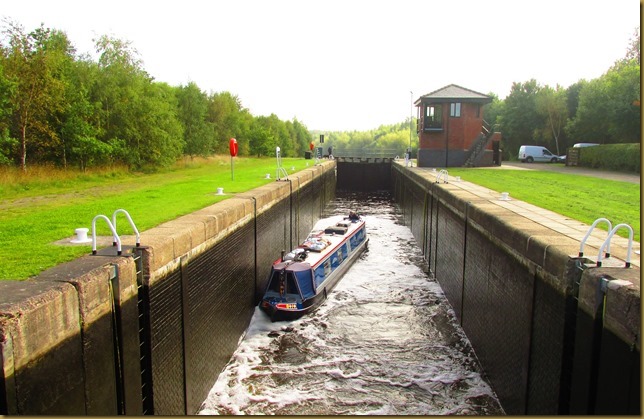 It takes a while to fill, too.

There are good, open moorings above the lock, and this is where we pulled in for the night. 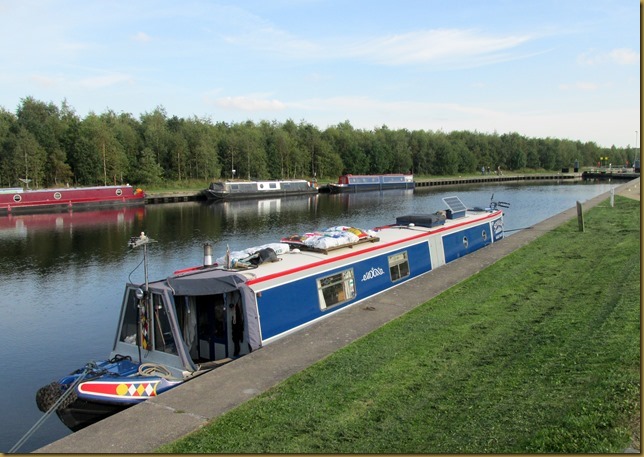 Incidently, “royd” is Norse for an area cleared of trees to allow a settlement to be built. Although the “Lemon” bit must be a corruption. It’s unlikely that lemon trees were felled here…

Tomorrow into Leeds, fingers crossed for a mooring in Clarence Dock. Should be another good day… 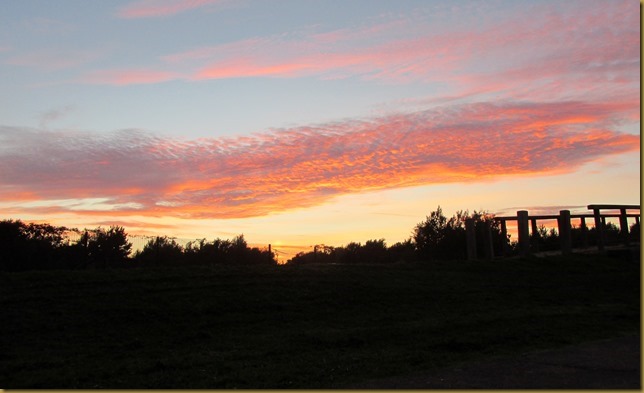