Off this morning to Wheelock, to use the facilities and do another load of shopping, this time for Meg. There’s a great Petfood Superstore right by the canal. That done, it started to rain again, so we decided to indulge in a fish and chip lunch from Liz’s Chippy. It was the best decision we could have made; they were the tastiest we’ve had for a long time. If you’ve the chance, you could do a lot worse than getting a takeaway from here.

We had a leisurely lunch, so it was gone 3 o’clock before we started on the Wheelock Flight, the first of the Cheshire locks. Over the next 7 miles there are 26 narrow locks, mostly around 9 – 10 feet deep, lifting the canal from the Cheshire plain to the north portal of Harecastle Tunnel.
We’ll not be using the tunnel just yet, though. We’re turning off on to the Macclesfield Canal at Hardings Wood for a bit.

Ducklings and Mum at Malkins Bank 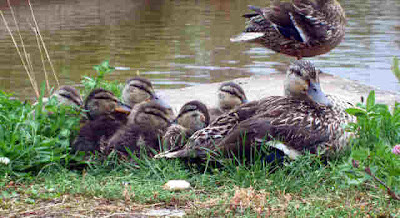 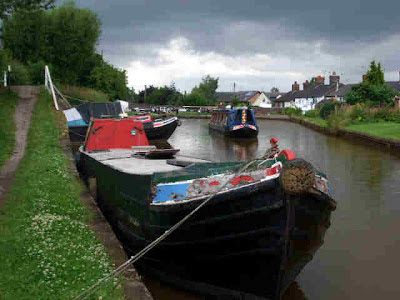 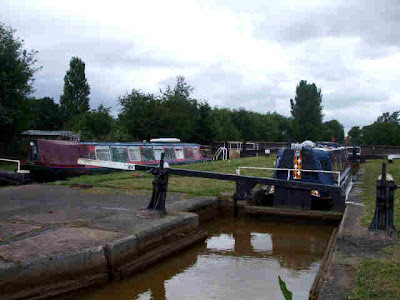 A lot of the locks on the flight were duplicated to speed up transit during the canal’s heyday.

By 18:00 we’d done the first 8, so called it a day between lock 59 and bridge 148, near Hassel Green. It’s been another showery day. Where did the summer go??
It has faired up a bit since we moored, and the forecast is a little better for tomorrow. Here's hoping!

I see that the problem with the water in Northamptonshire has been resolved. They're blaming a rabbit that sneaked into the treatment plant. I can't get this image out of my head; Bright Eyes in the dead of night with a bottle marked with a skull and crossbones and bolt cutters for the padlocks. Weird, isn't it!

Here's the BW notification...
Water storage tanks on boats following the lifting of the water boiling notice in Northampton, Daventry and west of Daventry

British Waterways has received the following advice from Anglian Water today about water storage tanks on boats following the lifting of the boil notice:-

Please see the link below to their website’s Q&A's and point 7 suggests the above procedure
http://www.anglianwater.co.uk/assets/All_Clear_Questions_and_Answers.v5.pdf