It’s been a cracking weekend for weather, hot and sunny, with just a short shower first thing this morning.
With Carol stopping at Buglawton, there was no Corbiere work to do, so I had quite a lazy weekend. That is, apart from a couple of long training runs, good walks with Meg, painting the inside of the cratch board (now a fetching shade of blue), and helping a solo boater up the locks on Sunday morning.

Today we waited until 10 before getting off, into Bosley Bottom lock and on up the flight. We had a pretty uneventful run up, steady away, arriving at the top at 12:15.
Mags got hold of Carol on the phone when we reached the top, she’d just started at the bottom. So, after filling with water and emptying what needed emptying, I moored up and left Mags on the boat to go and help Carol. It’s hard work doing locks on your own anyway, but these are particularly difficult, having mitre gates at both ends and not much opportunity for mooring to set the locks up.
Carol had got the first 3 done by the time I arrived, and we had a good run up the remaining 9, arriving for the third time (for me) at around 15:30. 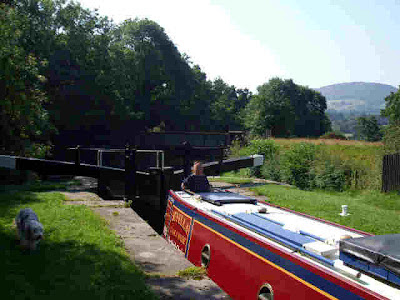 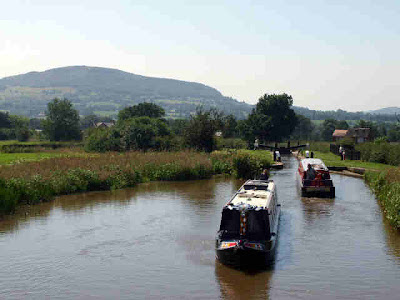 We moved on a short way from the top of the locks, and moored for the night before Crow Holt Bridge.

After a much deserved beer, Carol decided to try out a syphon device she’d bought at the weekend. Corbiere’s gearbox oil needs changing, and the drain plug is all but impossible to get at and remove. So the simple solution is to suck the old oil out through the filler hole. The sucker worked, so that’s another job done. It’ll need doing again shortly, as there’s evidence of water in the old stuff, but we’ve no idea how long it’s been in there.

Moving on to north of Macclesfield tomorrow.