A busy day at Grindley Brook…

Here’s a question for you…. How do you get 7 narrowboats in a pound designed for 3? Answer – You don’t, but we would have had to try if it had been left to a dim git sitting in the last single lock leading up to the Grindley Brook staircase.

But I’m getting a bit ahead of myself. Just down from the Whitchurch Arm, between the 2 Hassels Lift Bridges, there’s this marooned cruiser. I’ve not handed out an SBDA (Seen Better Days Award) for a while, so I think this’ll do. I just wonder how it got there. Was the helmsman going a little too fast and lost control? Or was it moored in the reeds and they’ve grown up under it? Maybe the Llangollen Canal floods a little more than I thought! 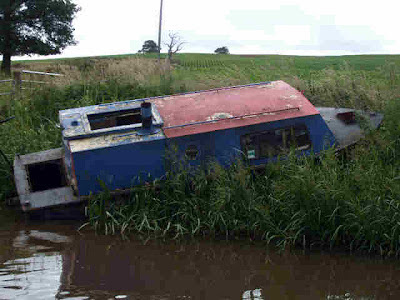 It’s a bit busy on the Whitchurch Arm moorings for us, so we decided to move on a bit today. We were late away, but it’s only a mile to the Grindley Brook Locks. There were 3 boats on the way up as we arrived, so we took the opportunity to get rid of rubbish and empty the loos. 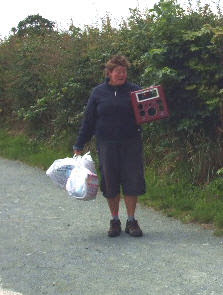 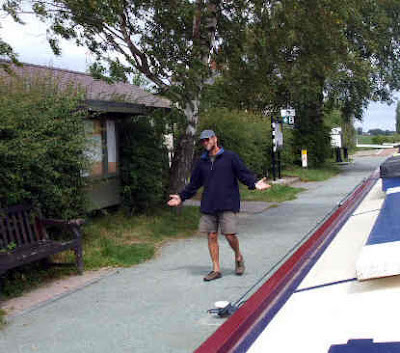 After a ½ hour wait we were in the 3 rise staircase and on our way down, the first of 3 boats. Dropping out of the last lock we were faced with a pound full of boats, and an occupied lock. It took a bit of gentle persuasion and cajoling to get the boat out of the lock and breasted up alongside one of the others, so we could get into the lock. Then I had to tell boats waiting below not to go any further up till those above started to move. All in all there were 11 waiting to go up in various pounds up the flight. It did mean that we had a very fast run down the flight, with other crews helping. Let’s face it, they didn’t have much else to do!
I think a lock keeper on the staircase and another on the flight might help to sort things out a bit better, but I can’t see that happening.

After all this excitement we decided we could do with a cup of tea, so pulled over at the bottom of the flight. A visit to the shop attached to the garage on the main road was also required.
It’s not a bad spot, and the weather had stayed fine, so we decided to stop here and do a bit more on Corbiere.

More work on Corbiere. Well, we had to discuss the plan first, didn’t we? 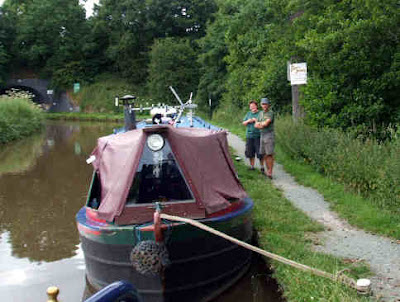