There were several empty bottles to go in the rubbish this morning. With all the talking we’ve done this last couple of nights we had to keep the vocal cords lubricated, didn’t we.
After a day spent tied up (for us, anyway) we decided to head off today, down to Autherley Junction then back up the Shropshire Union a short way. It had been a good frost overnight, giving us a bright and sunny morning. 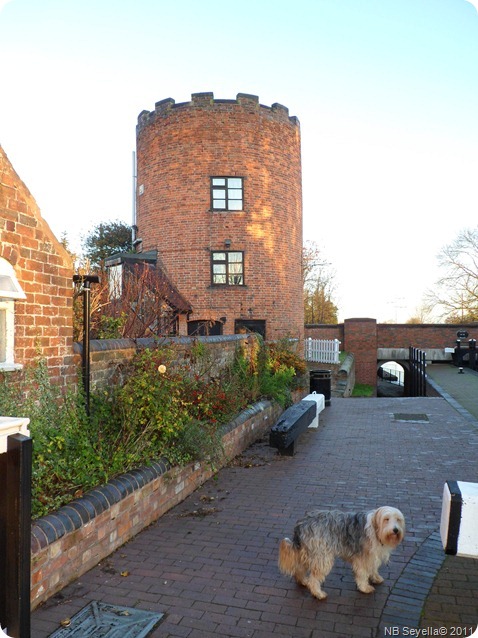 RnR, M2L and Seyella moored up. Meg is waited for Molly to come out to play. 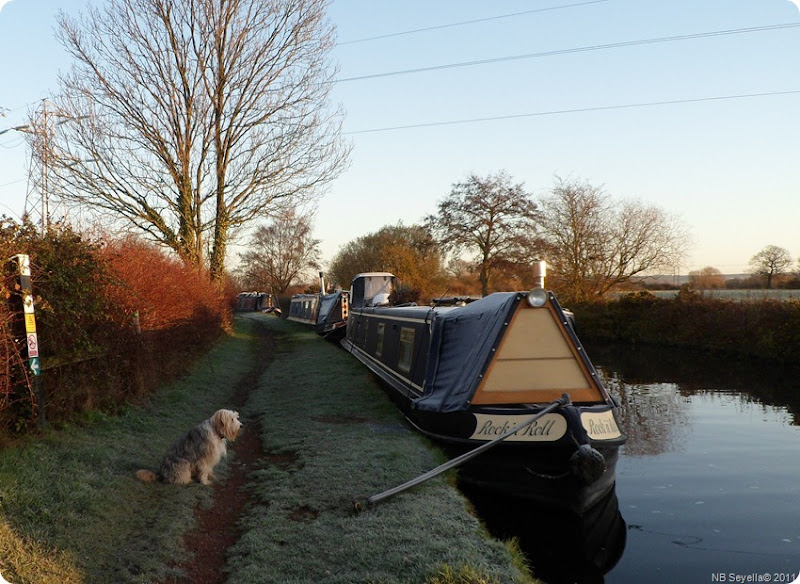 A smoky chimney is always a welcome sight on a frosty morning. 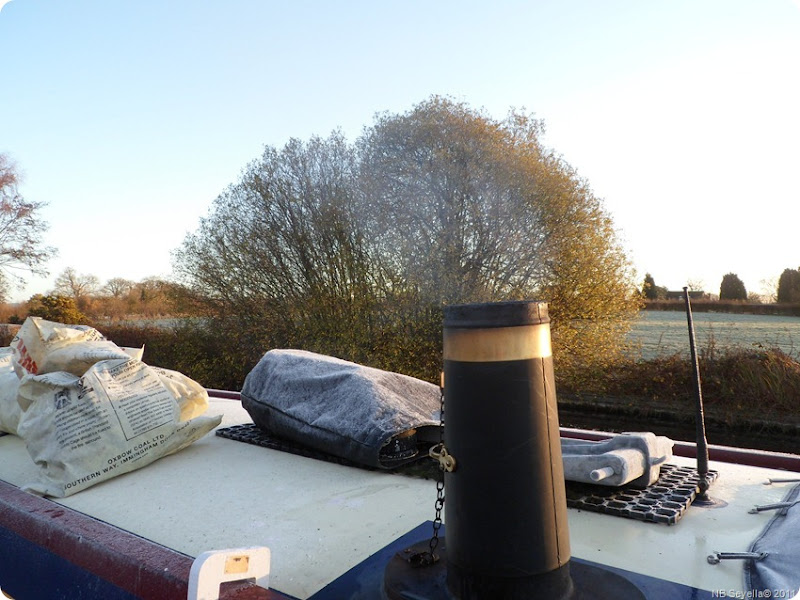 By the time we’d got all three boats up Gailey Lock, then watered up, it was close to 11:00. Unfortunately the day’s bright start didn’t fulfil it’s promise, high cloud just leaving a watery ghost of a sun visible, with no heat in it. 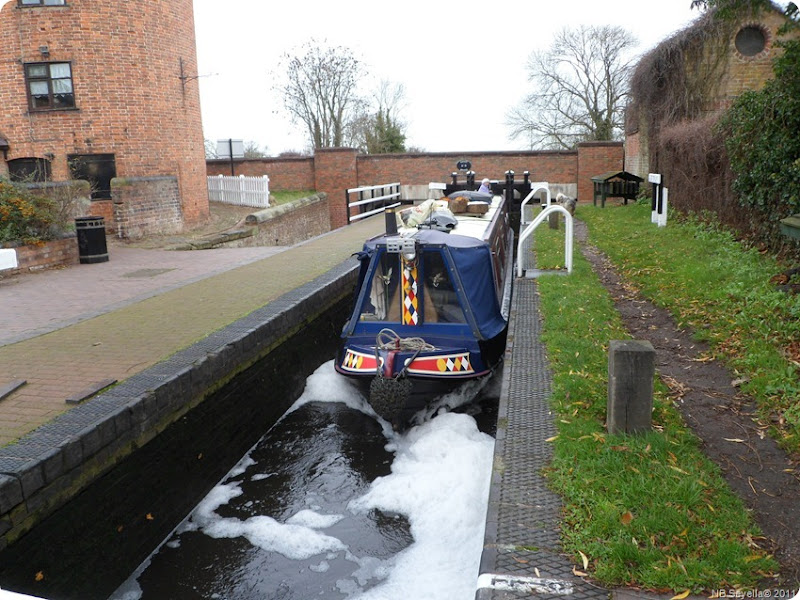 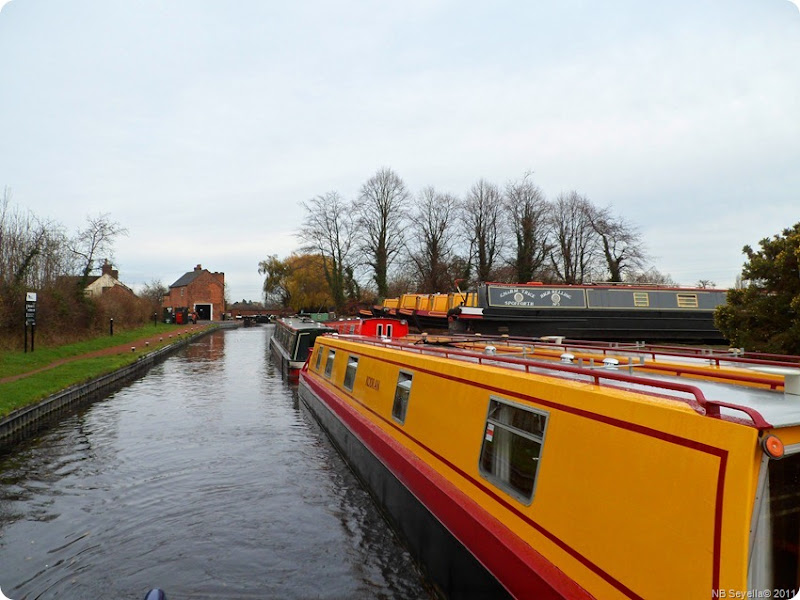 As an early contour canal the canal winds it way around the countryside, staying at the same height. Between Gailey and Calf Heath it describes most of a figure “S”, before finally making it’s mind up to head south. 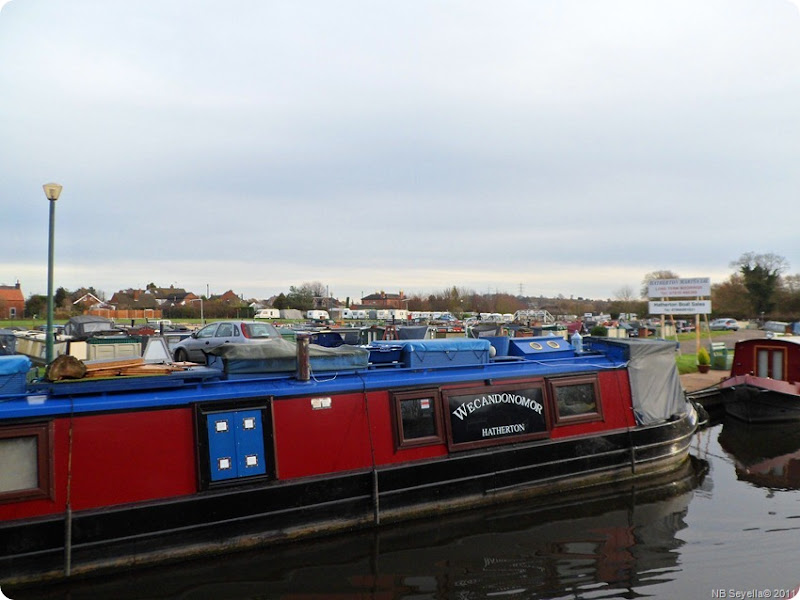 The Hatherton Branch Canal heads off eastward alongside the marina. Once a link to the northern BCN at the Cannock Extension Canal, the navigation ends at the second lock, now converted to a dry dock.
The branch was built in 1841 to Churchbridge, primarily to carry coal. When the Cannock Extension Canal was completed in 1860 it included a link down 13 locks to connect to the end of the branch.
The Hatherton Branch and Lichfield Canals were both abandoned in the 1950’s and parts of both have been lost to road building and development.
There is a proposal to re-open the branch, but it involves a diversion at the far end as the Churchbridge locks have been destroyed by open-cast mining. If achieved this would provide another route up onto the Birmingham plateau, and if the associated Lichfield Canal restoration also went ahead it would also give access to the Coventry Canal at Huddlesford. A variety of cruising rings would become available, and the northern BCN would become busier.
The Lichfield and Hatherton Canals Restoration Trust (a bit of a mouthful, that) is spearheading the project. 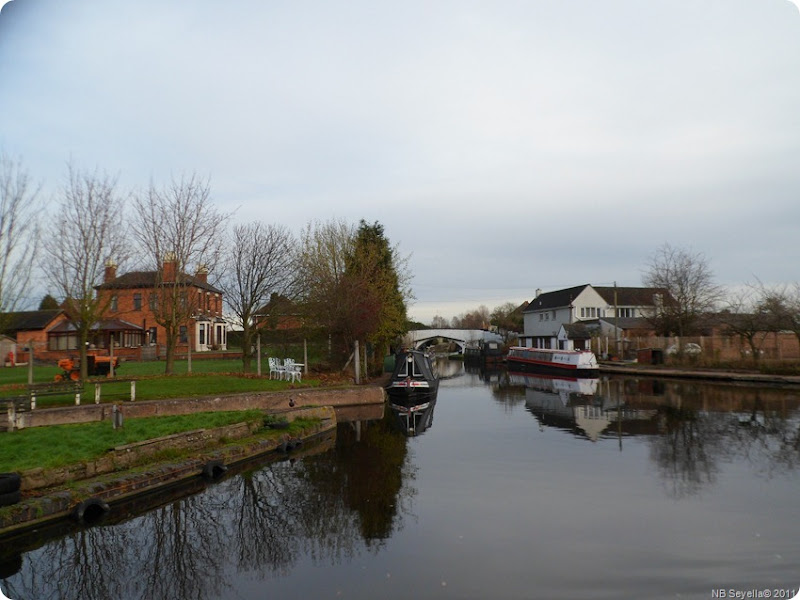 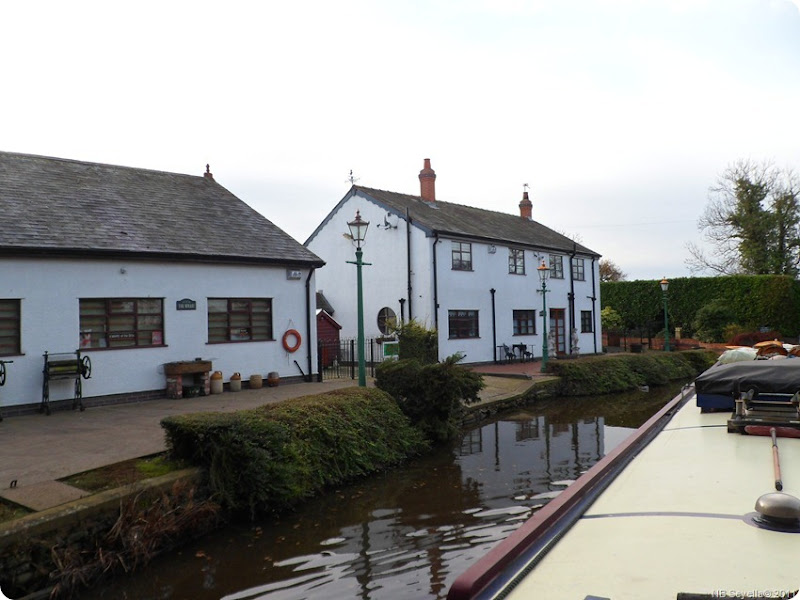 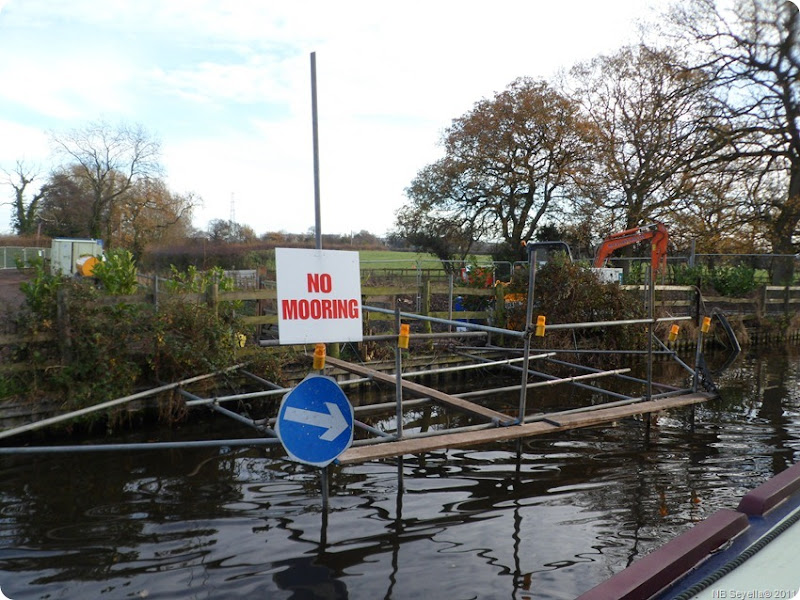 Passing under the M54 at Coven Heath pretty well marks the boundary from the mainly rural section to the suburban sprawl of Wolverhampton. At Ford Houses the canal engineers encountered a ridge of hard stone, difficult to cut through, so they adopted the solution of only removing the minimum necessary.

The narrows at Ford Houses. M2L is visible in the distance 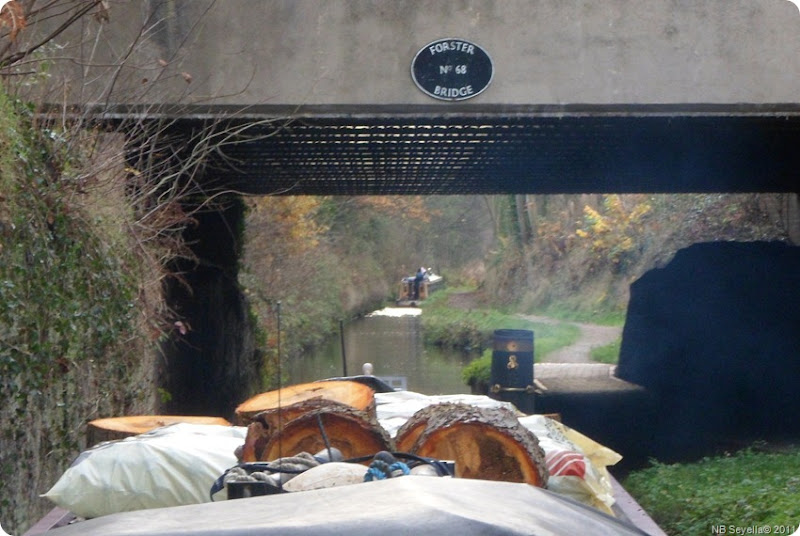 About half a mile long, this single width section must have been a major bottleneck in commercial days. There are a couple of passing places, but they wouldn’t have accommodated a working pair.

The narrows end at Marsh Lane Bridge, then there’s around 15 minutes of wide canal before reaching Autherley Junction. 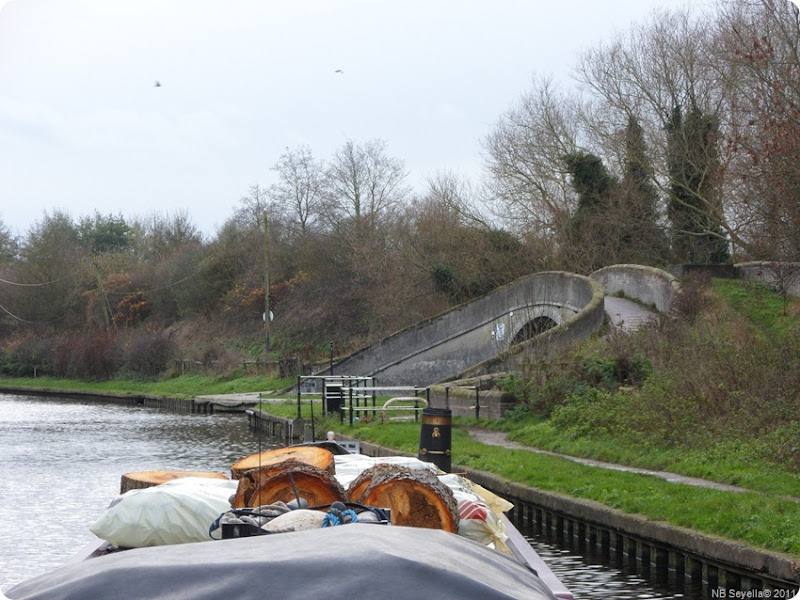 We had a change around in cruising order here. George had tied Carol up(!!) and gone ahead to work Chas through the shallow stop lock, so we overtook RnR as well. 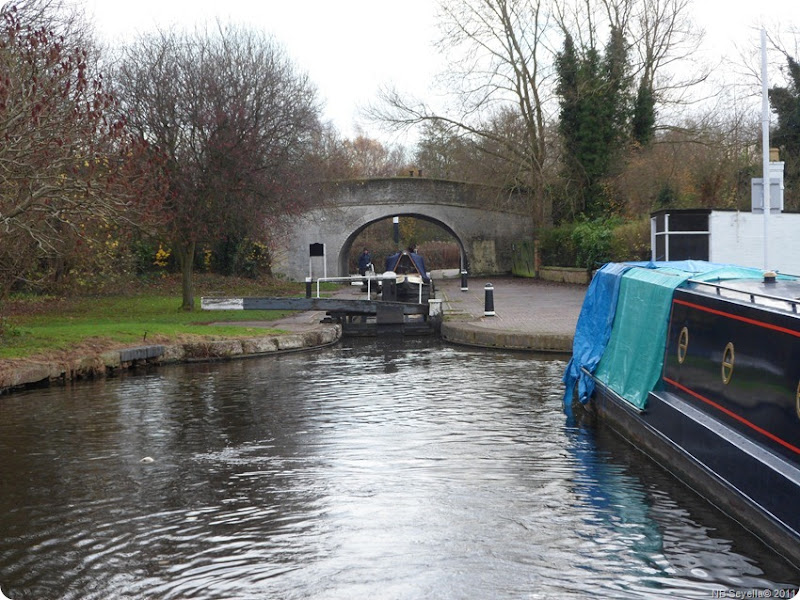 We’re now heading roughly north, on the Shropshire Union. Passing the Woverhampton Boat Club moorings and Pendeford Bridge the canal moves back out into the countryside.

Wolverhampton Boat Club. No sign of the Guard Goose today…. 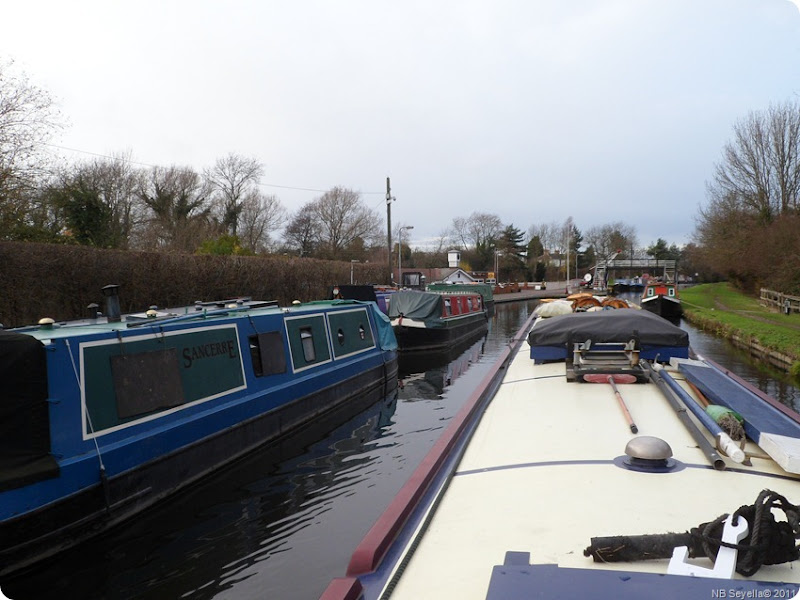 Pendeford Bridge and the stop gates just above. 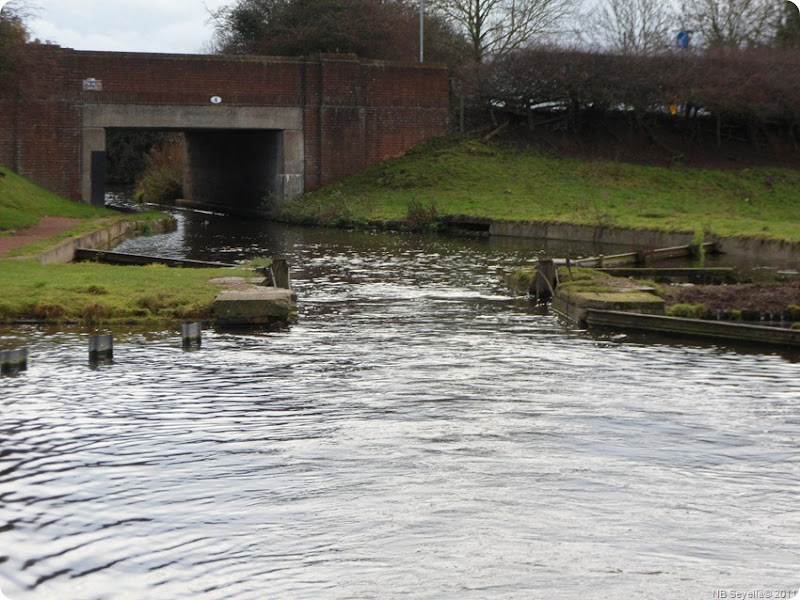 The gates are designed to shut in the event of a breach on the Staffs and Worcester. Looking at the state of them, though, I’m not sure they’d be that effective. There’s 8 miles of canal to the next lock at Wheaton Aston. That’s a lot of water to lose!

The Shroppie is wide and deep this far south, apart from where the navvies came across that rock outcropping that confounded the S&W at Ford Houses. Even though construction techniques had improved considerably in the intervening 60-odd years, the solution was still the same!

Narrows near Bridge 5, only dig out what you need to! 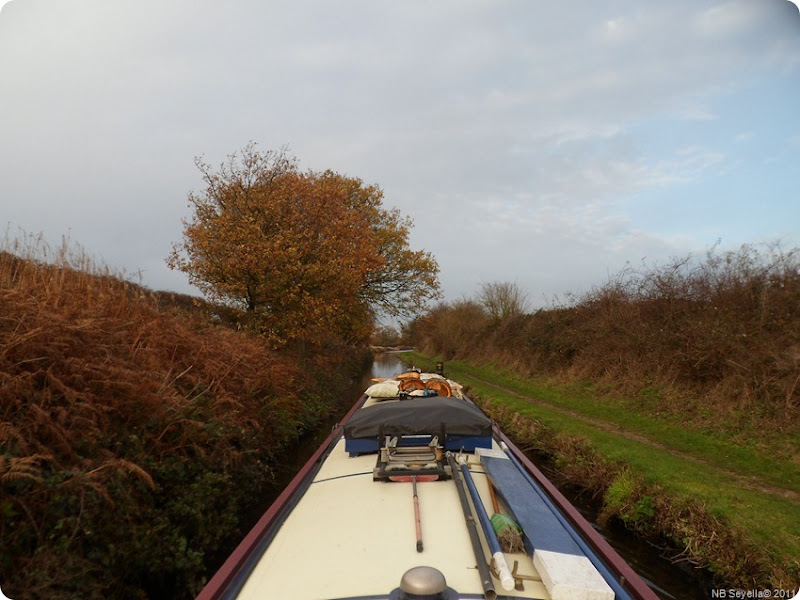 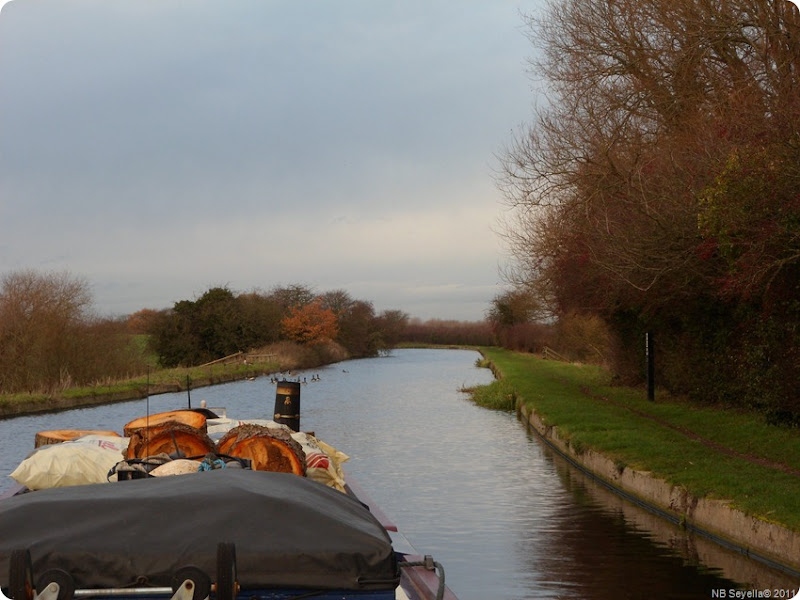 We ducked under the M54 for the second time today, and moored up on the SUCS moorings between Bridges 7 and 8. 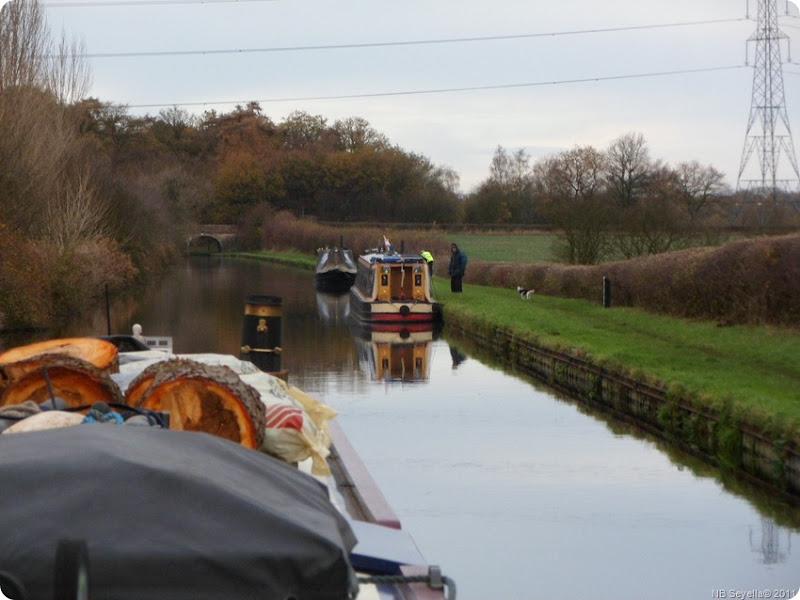 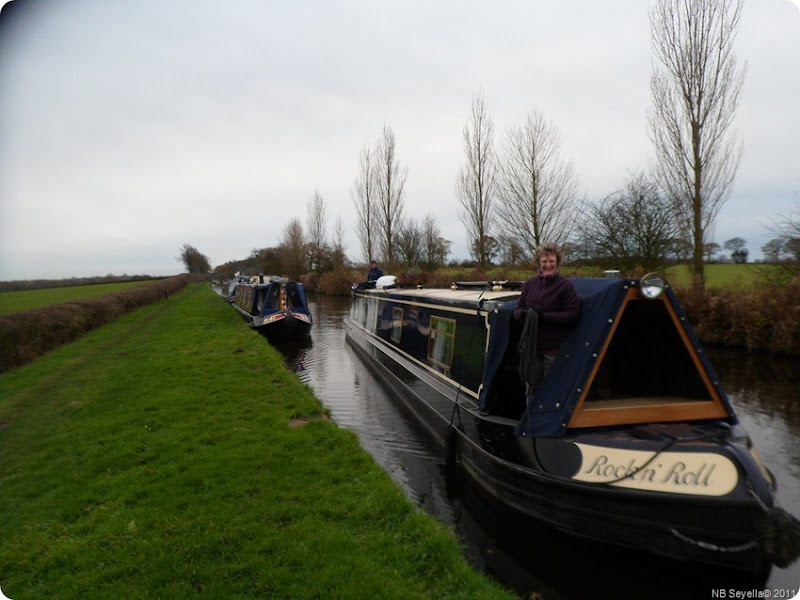 We all piled on board Seyella for a cup of tea and a mince pie, and to defrost after what seems to have been a long, cold cruise. Just a short hop tomorrow into Brewood, hopefully to meet Lesley and Joe off NB Caxton who are driving up from Stourport.