Busy day after a couple of lazy ones…

We spent the last two days just pottering really, nothing specific to do, just bits and pieces.  We had cold nights but reasonably bright days, although yesterday was a bit damp with a bit of snow and sleet.
First thing on Friday was very pleasant….. 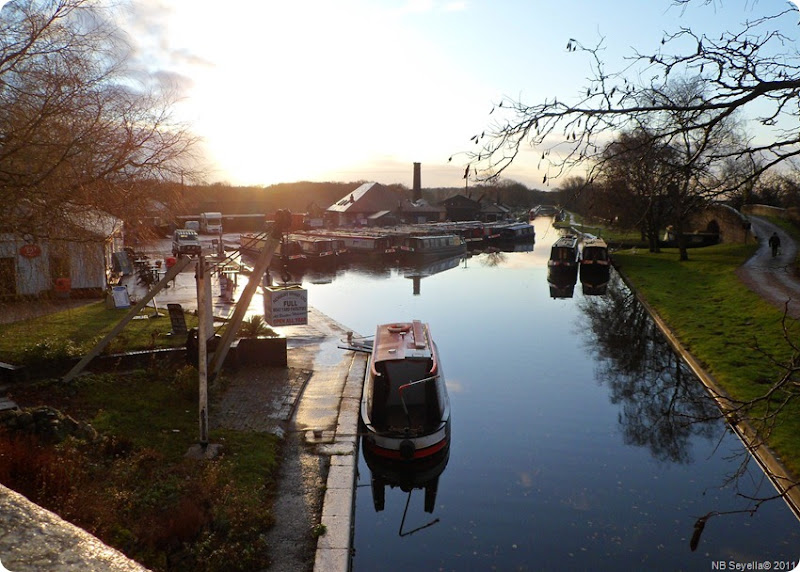 Looking down the Shrewsbury Branch 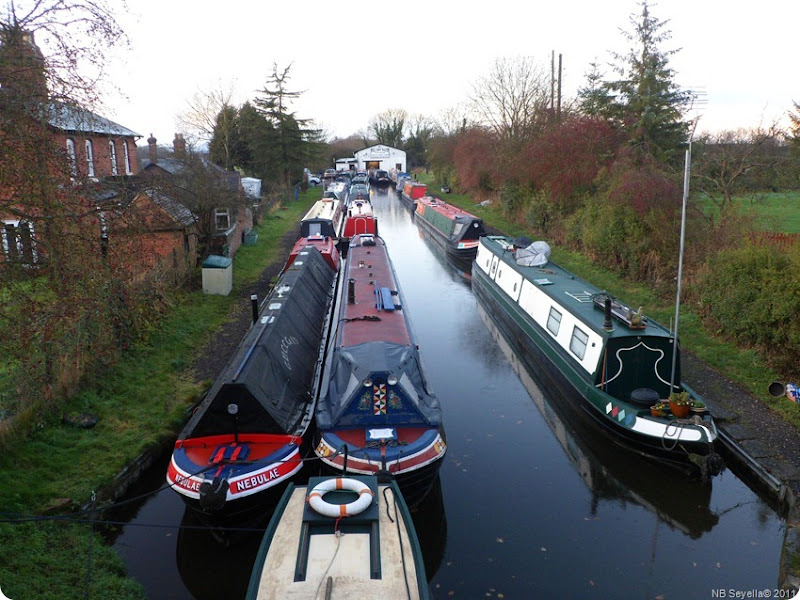 A thin skim of ice on the water down there… 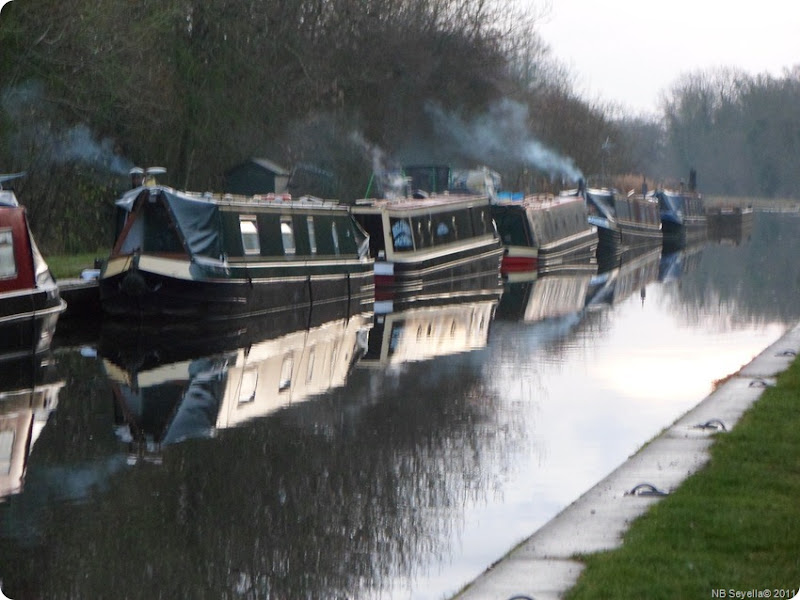 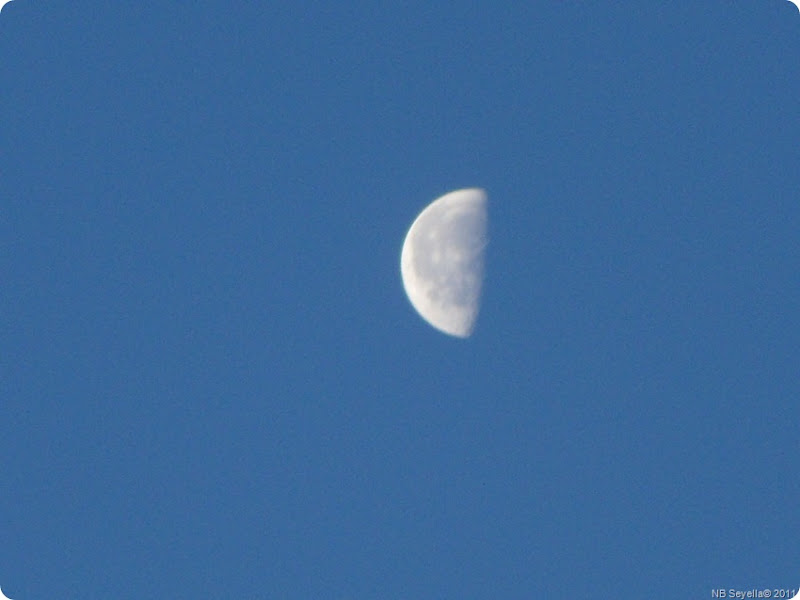 We intend to be at Market Drayton on Tuesday, find a spot on the 14 day moorings and spend Christmas there. At this time of year it’s 2 day’s travelling, after 3 hours it starts to get a bit cold on the tiller. So we decided to set off today, take tomorrow off (the forecast is a bit grim), then finish off the trip on Tuesday.
But first there was a bit of “housekeeping” to do. Both Seyella and Moore2Life had to go back through the bridge to take on water, and Charles decided to top up M2L’s diesel tank as well. The Rockers had got a Tesco delivery due, and they also wanted to top up the tanks, so we had a bit of a staggered start.
We were off first, but I’d planned a stop just a short distance on in Grub Street Cutting. There was the remains of a beech tree with my name on it….

I’m a lumberjack and I’m all right…. 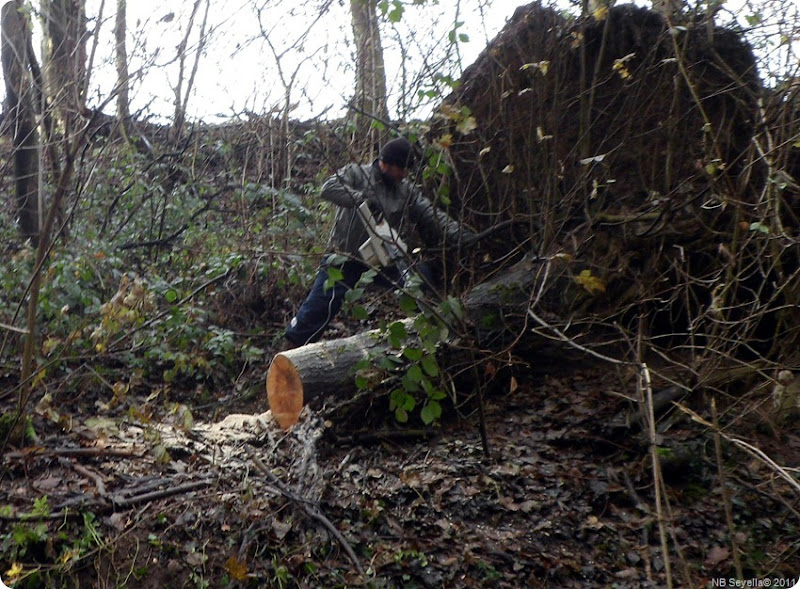 I got five good rings off the stump, that’ll keep us going for a few days.

High Bridge with it’s curious telegraph pole in the middle is in Grub Street Cutting..... 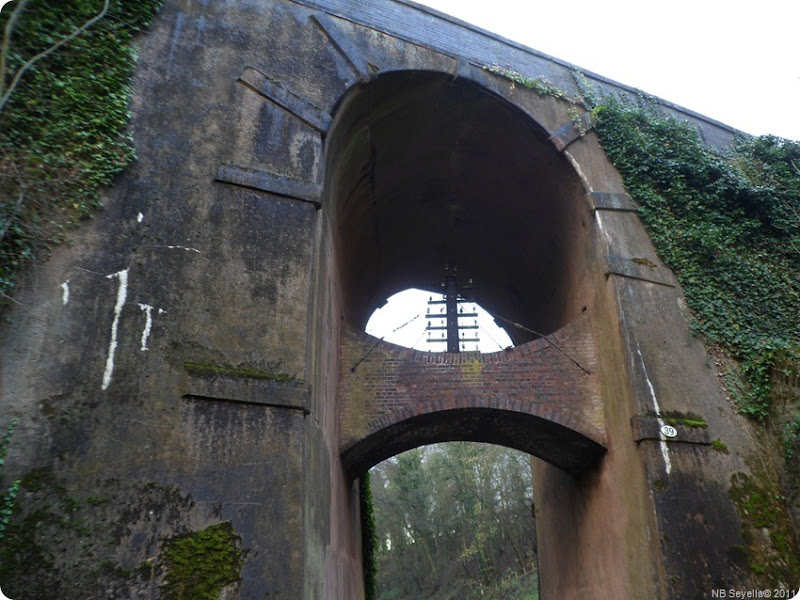 ....as is Double Culvert Bridge, carrying a footpath and a stream. 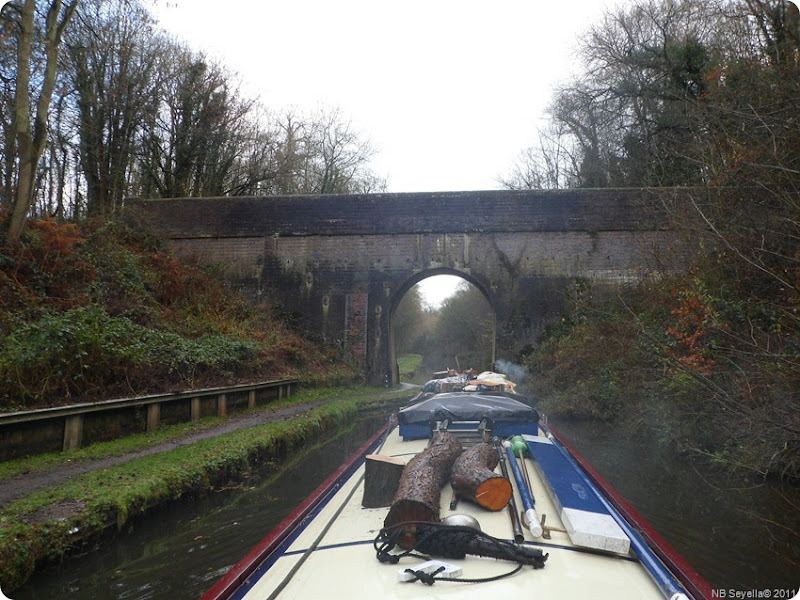 Out of the cutting the popular moorings at The Anchor Inn are next. In the summer it’s difficult to find a spot here. 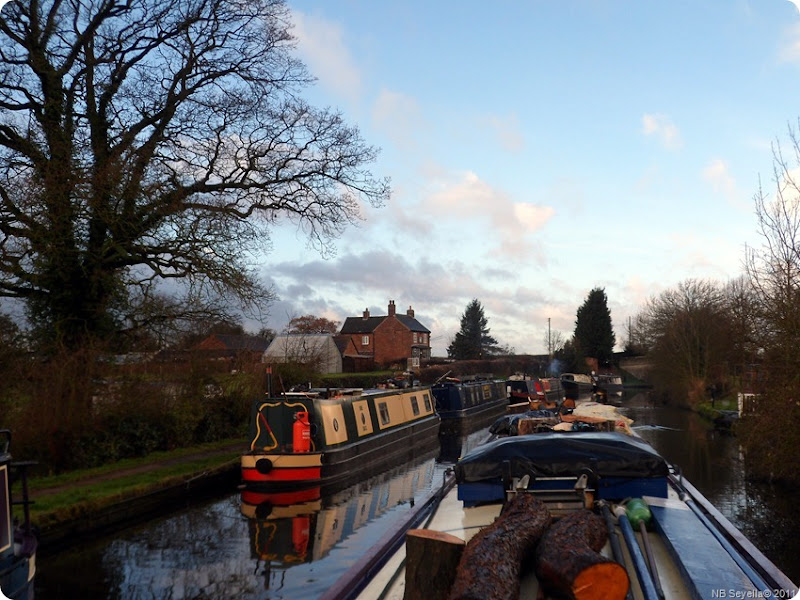 There’s a long line of linear moorings between here and Shebdon, keeping boat speed down to tickover. But it gave me a chance to admire the fantastic skies as heavy clouds blew over. 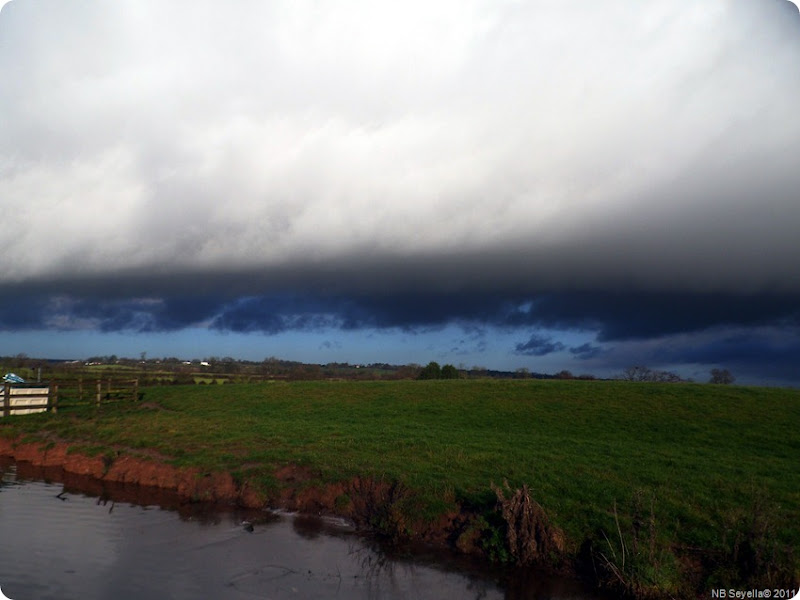 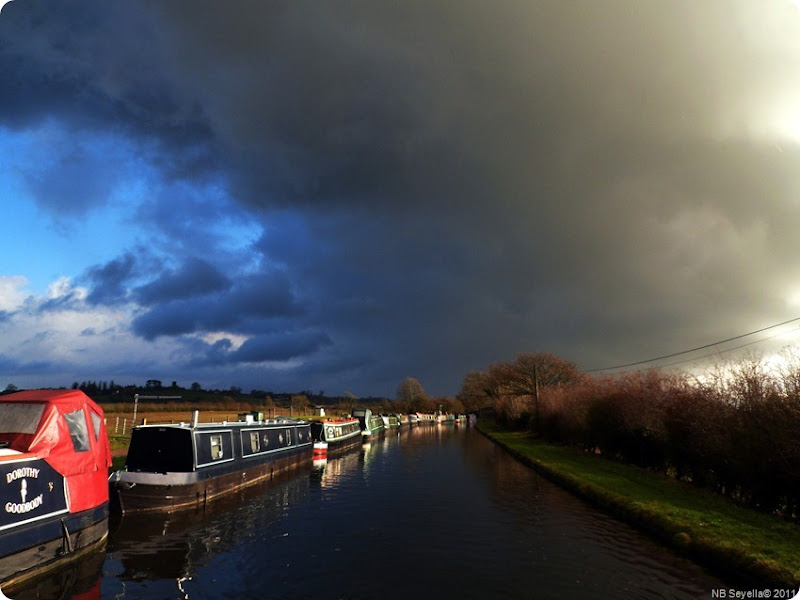 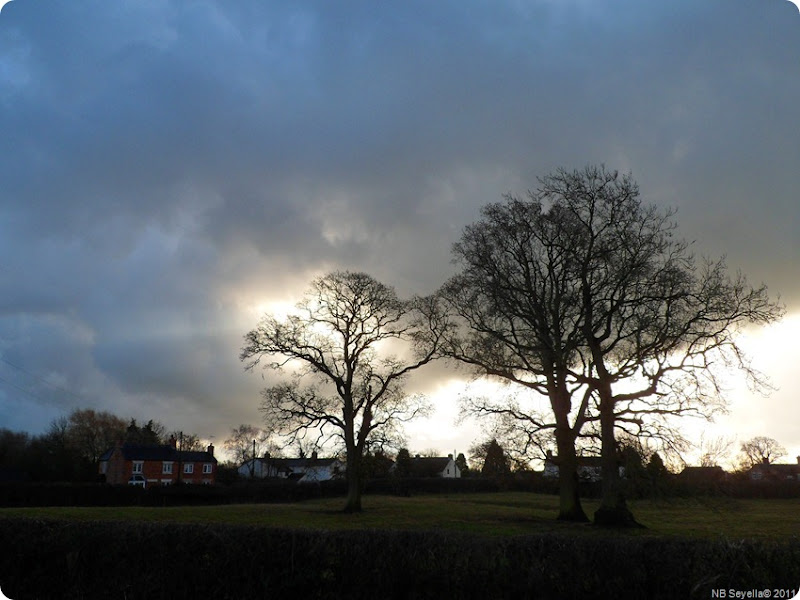 Although it looked as though someone was getting a dousing we almost got away with it. Just a few minutes spattering of hail. 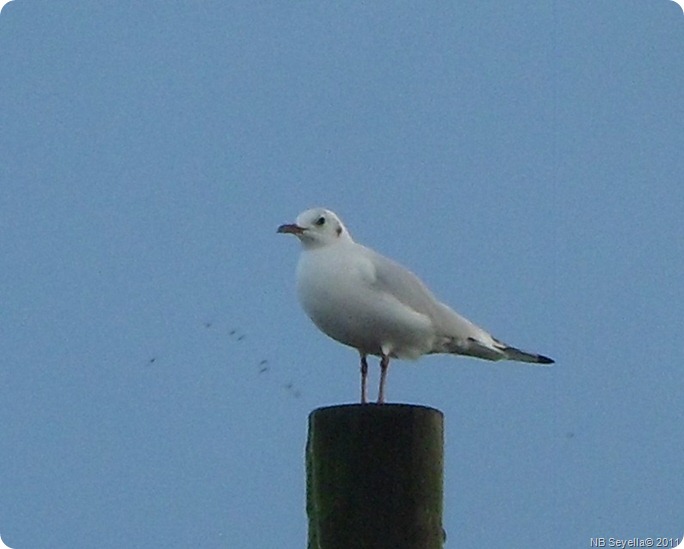 Shebdon Embankment is another huge earthwork, around the same length as Shelmore but not quite as high. 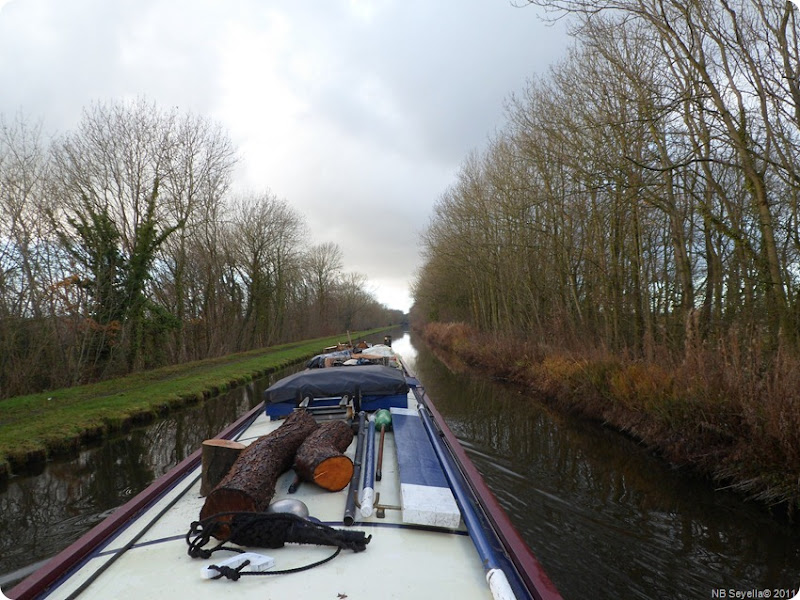 At the end of the embankment is the Knighton Creamery. Originally built produce chocolate crumb, a basic ingredient of milk chocolate, it was ideally placed to take advantage of the dairy farms in the area and the canal for transport of the product to Cadbury’s at Bournville.  Now operated by Premier Foods it still produces dried milk based products, including Drinking Chocolate and custard powder. In fact I’m sure I detected a faint aroma of chocolate in the air as we passed by…. 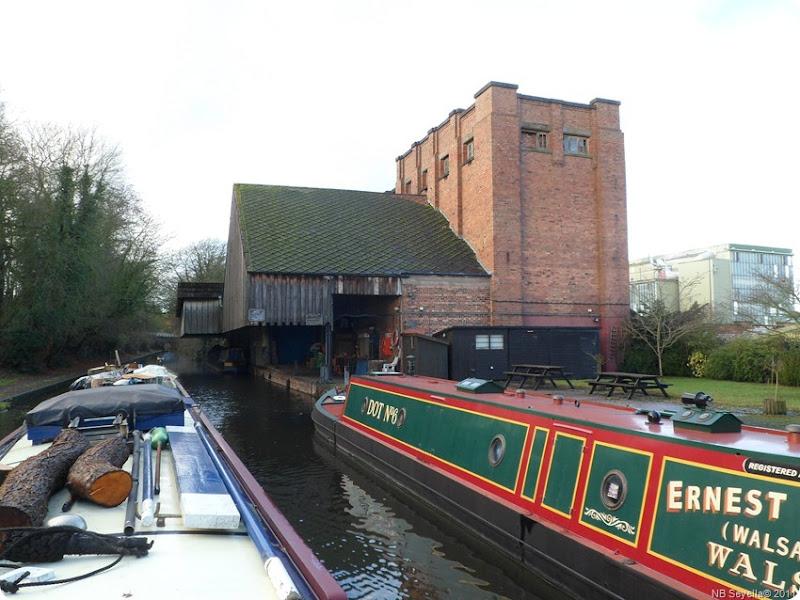 There’s usually one or two historic boats under the preserved loading canopy.

We pulled in a little further on, just past Black Flats Bridge. We had to shuffle about a bit to find a deep enough spot to get in. 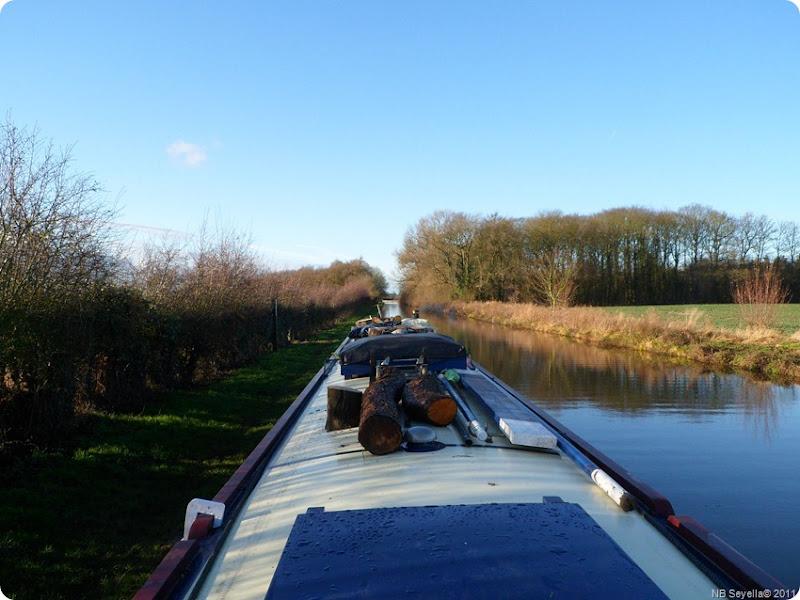 We were joined later by both Moore2Life and Rock’n’Roll. While I’d got the chain saw out I sliced up the logs I’d acquired near Gnosall a few days ago, then split up a fair amount ready for the stove. I was ready for a sit down with a mug of tea and one of Ann’s mince pies when we were joined by the Rockers and the Lifers at around 3 o’clock. Then Meg got a quick walk as it got dark so I’m going to have to stack the cut logs back onto the roof tomorrow. That’s if no-one purloins them in the night….
It’s handy that both Rock’n’Roll and Moore2Life have diesel fired heating. Any wood we spot while cruising together is all mine!