Time for a catch-up.

Sorry, I’ve been a bit lazy these last few days.
Now then, where were we? Aah yes, moored near the Wyre Aqueduct on the edge of Garstang on Saturday evening.

The Wyre Aqueduct from underneath. 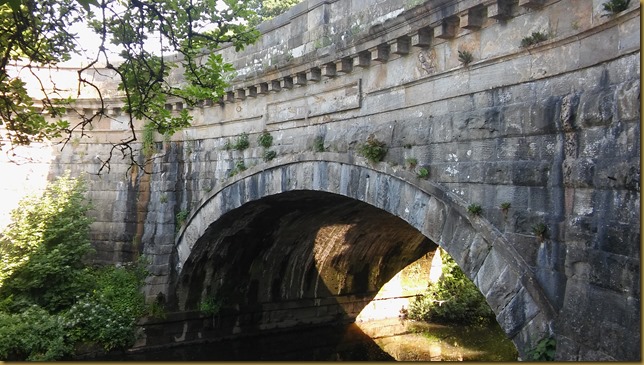 On Sunday morning, unusually for us, we were on the move, but not going far. Through the town and mooring on the north side, just next to the Fyle Water Board pipe bridge.

We passed Rob and Jane (The Whippets) on the service wharf. 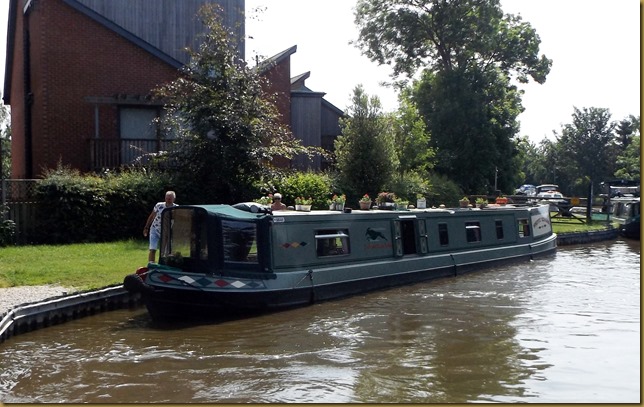 We pulled in just in front of the cruiser on the left. Well, mostly. The rear end was stuck out, but that’s the norm rather than the exception on this canal. 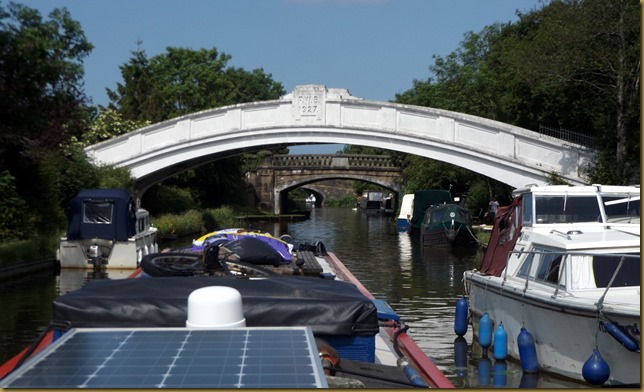 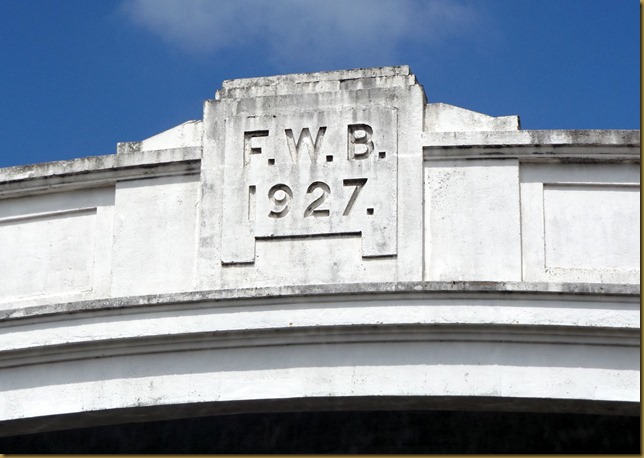 The pipe bridge is a fine example of concrete art deco design. Or not, depending on your point of view. Many times better than just a lagged metal pipe crossing the canal though.

We pulled in here as there’s easy road access alongside. Howard picked Mags up to go and visit son Eric over in Poulton-le-Fylde, he’s very poorly. When they got back around 4 o’clock we had a late lunch, and Penny, who Howard had brought with him, experienced hand-feeding a greedy swan. They left in the evening, and so did we, pushing on for about a mile to a lovely spot looking out over the fields. 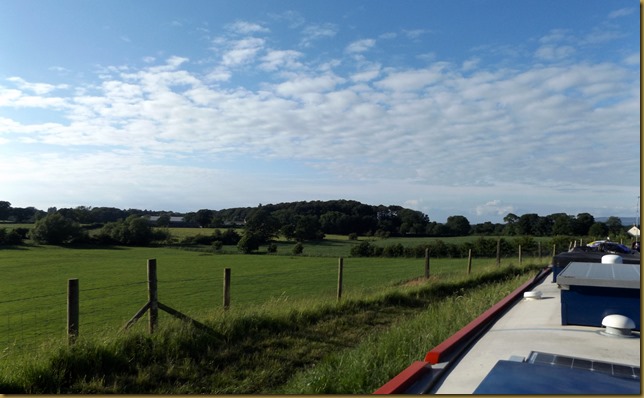 It was duller and cooler on Monday morning as we set off.

Not a place I’d leave a small and fragile boat… 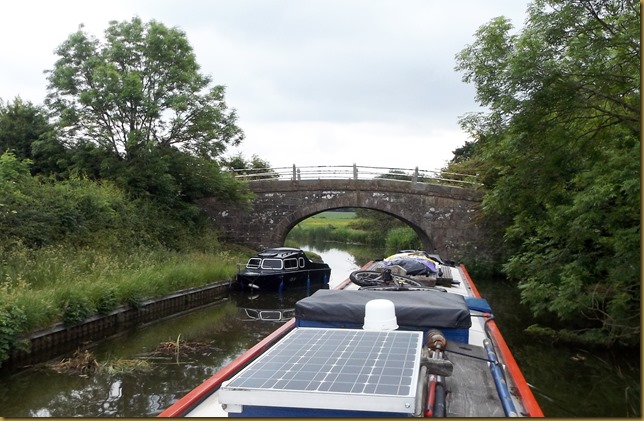 Flat countryside with Beacon Fell rising in the distance. 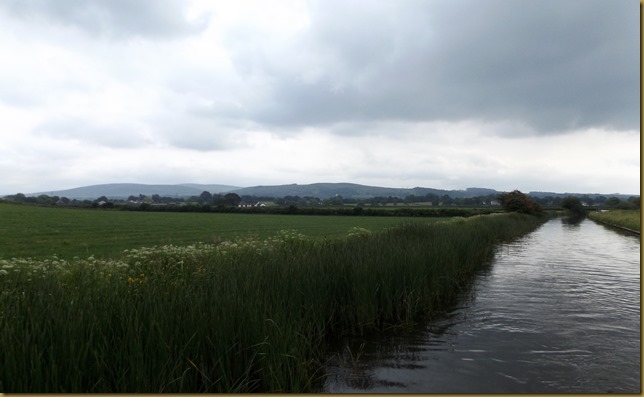 We moored at Radcliffe Bridge, No. 75 with, once again, good road access and parking. 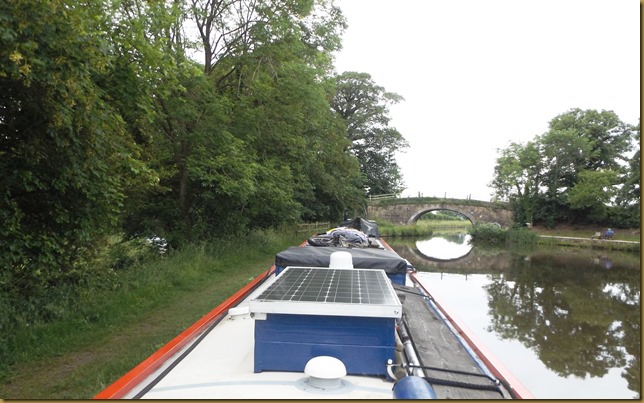 On Tuesday it was Val and John who came to see us, and took us off to lunch at the nearby Stork Inn at Conder Green. A very pleasant pint of Timothy Taylor’s Landlord and an equally pleasant meal with the dogs snoozing under the table. We would have sat outside but it was a bit warm.
Then we stopped for pudding on the way back, at Wallings ice cream farm at Cockerham. It was heaving with folk, even though the kids are back at school and it was a weekday. But the ice cream is very good. Very, very good.

Back at the boat we had a brew before our good friends set off back to Wales. A really enjoyable day.

So this morning we reversed across to the water point on the offside, filled the tank, then set off towards Lancaster. 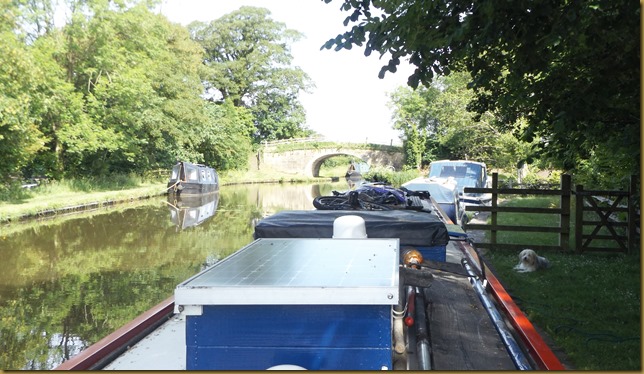 This section of the canal winds along, faithfully following the 70 foot contour, through bosky cuttings and open country. 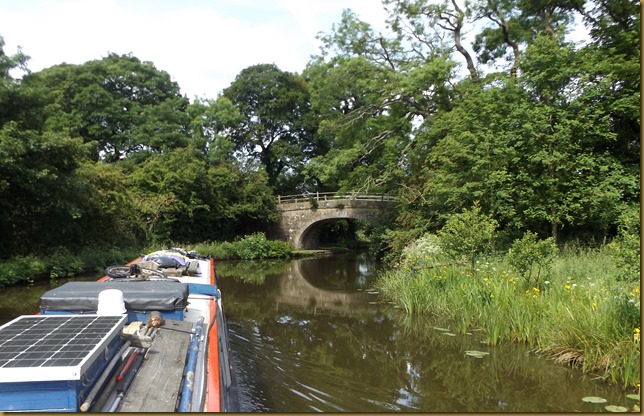 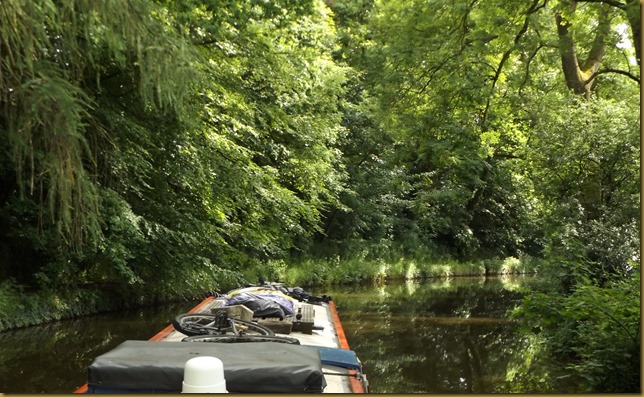 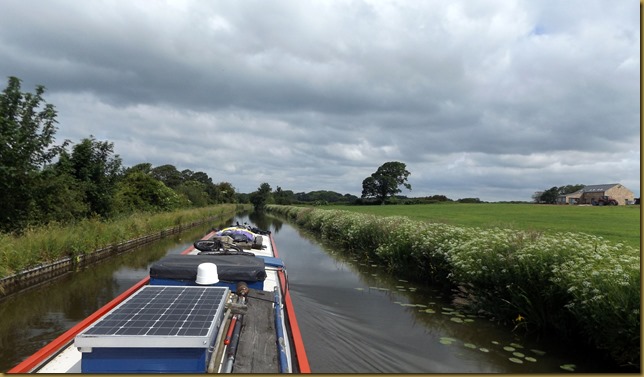 Smart looking farms lie in dips and folds in the fields. 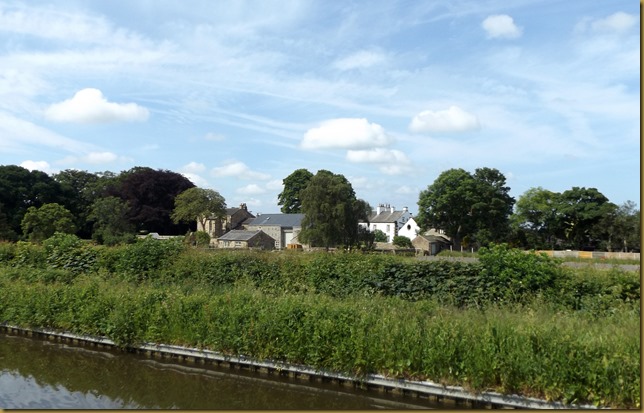 An unusual cratch, rustic framework and a canopy planted with sedum! 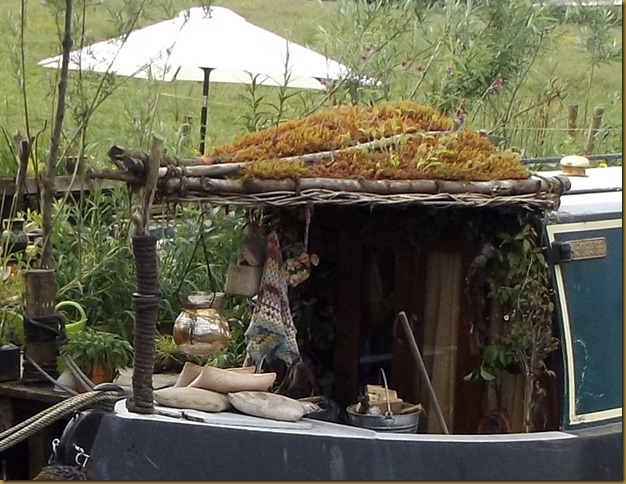 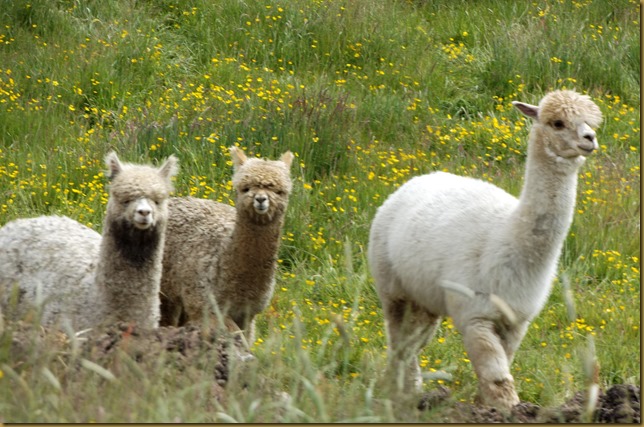 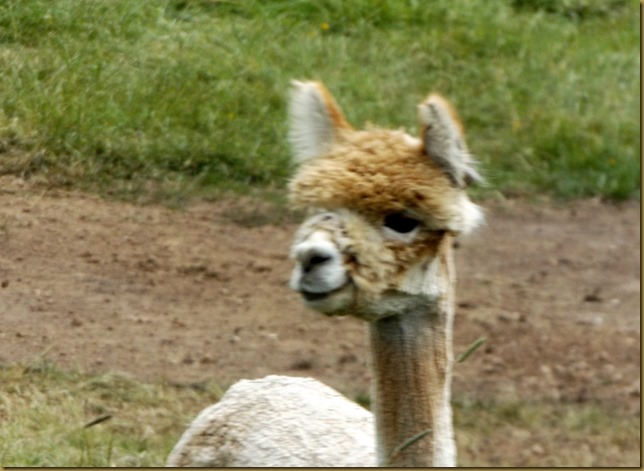 All the bridges on here have fine stone arches, but they went one better at Ellel Grange, adding a decorative touch… 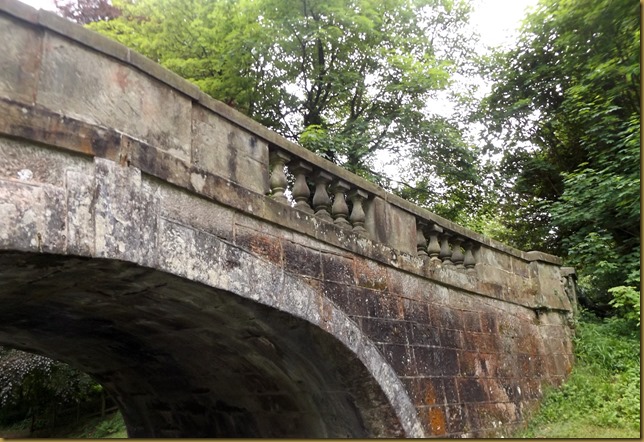 …likely at the insistence of the owner of the mid-eighteenth-century Grange, just to the west. Ellel Grange is now a religious retreat and training centre.

Emerging from under Double Bridge, No 85. 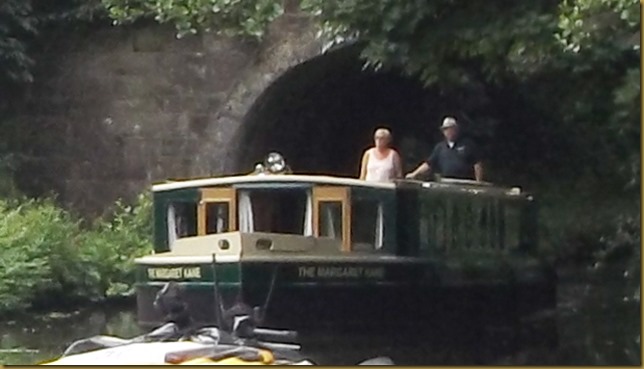 It’s a long shot, I stood off well clear! You don’t get many of those to the pound!

We passed the junction with the Glasson Branch which drops down to the sea at Glasson Dock through 5 locks, then pulled in on the good moorings just this side of Galgate. 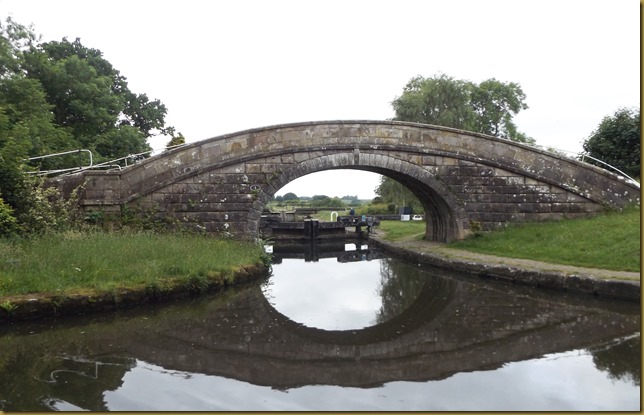 Yes, it’s called “First Lock” and the rest are Second Lock through to Fifth Lock. Having not had much practice of naming locks on this canal, I guess they chose the easy option…

We pulled in opposite the Galgate Marina cruiser moorings, on a fine concrete edge with mooring rings, no less! There was me thinking we’d be able to get both ends in on proper moorings for the first time in a week… 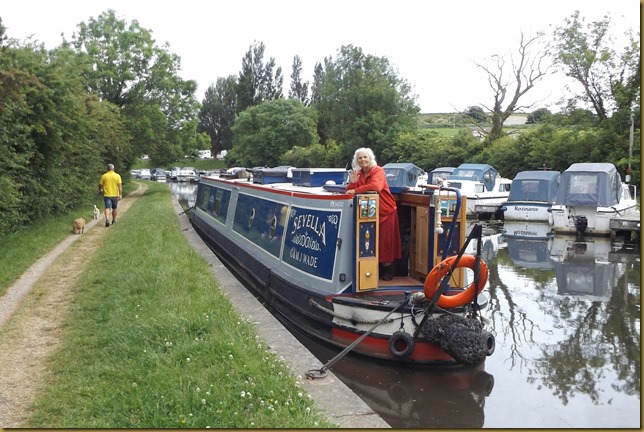 We’d not long pulled in at Radcliffe Bridge the other day when the mowing men turned up to cut the towpath spraying the side of the boat with cut grass as they passed. So then I was fighting a losing battle with the encroachment of grass into the boat till we left.
I noticed that this verge hadn’t been cut when we arrived, and bugger me, within 15 minutes here they are! 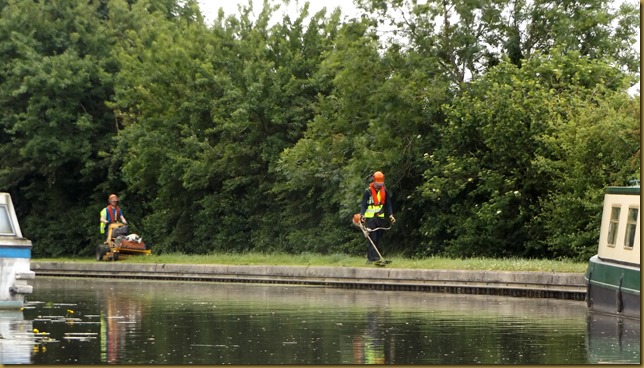 I think we’re being persecuted…

Up through Lancaster tomorrow, I guess. Might even get a paddle in the sea at Hest bank…

It is one canal we have not done over the years... Planned yes but done no. It looks fabulous apart from the moorings but then we ccers are used to that!!

Do hope Megs son is going to be OK. It must be quite a worrying time. Our thoughts are with you xx

More great pictures Geoff. Margaret is looking good too. Enjoy Lancaster. Hugs to you both. x