After spending Friday night close to the rush and roar of the M6, we set off back to Carnforth on Saturday. Actually the traffic noise wasn’t too intrusive, but we had to leave to meet family later.

Moored right at the end of the currently navigable waterway. 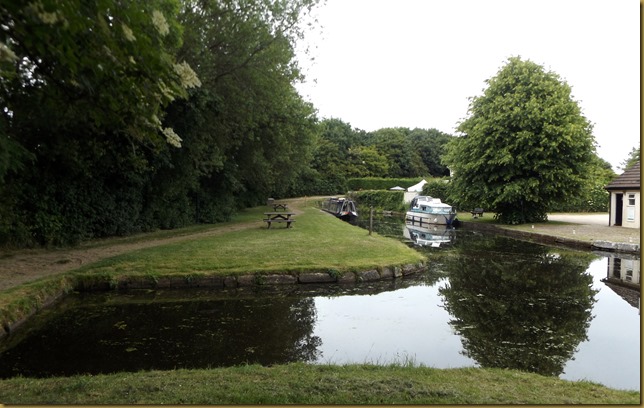 The stub to the left is the remains of a short arm, truncated during the construction of the motorway.

Just before the canal passes the village of Capernwray there’s a quarry arm off to the left. 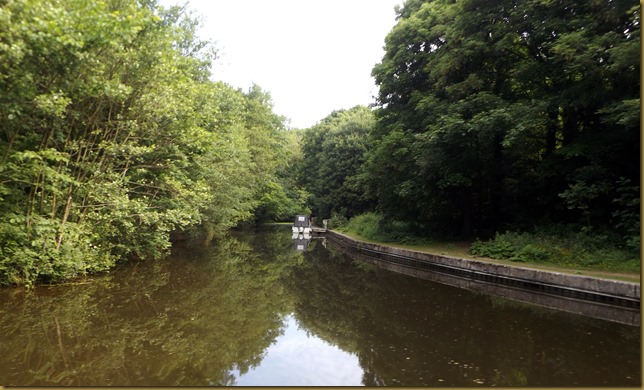 There are 48 hour moorings here, but I doubt there’s sufficient depth for a narrowboat.

The canal ducks under the West Coast Main Line here, which in turn crosses the River Keer on a fine stone aqueduct. 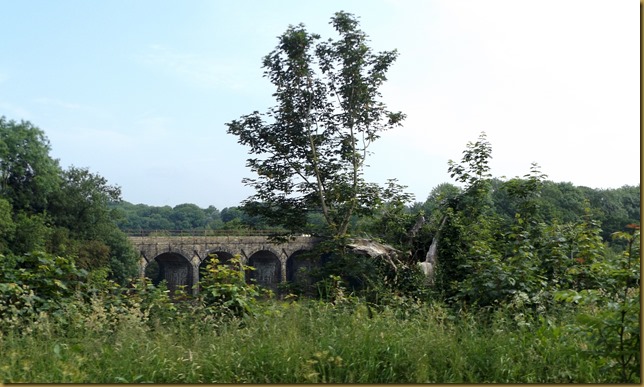 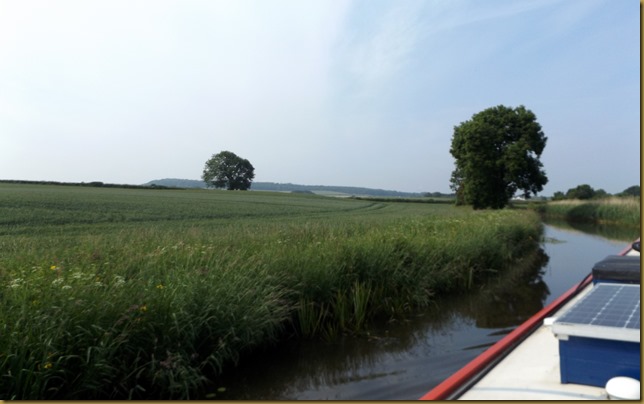 Plenty of mooring space as we arrive in Carnforth, just mainly too shallow for us! 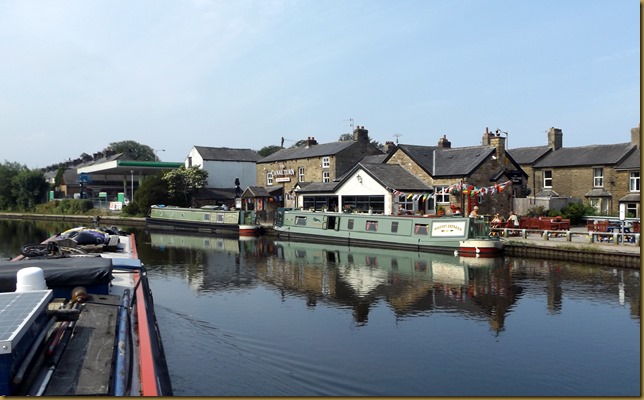 Having tried to get in in front of the two narrowboats moored there, we finished up behind them.

They are Compass Rose and Whippet Express, two of the boats we did the Ribble crossing with.

Mags’ grandson Steve and family arrived in time for a fish and chip lunch with us, and stayed for a couple of hours. But after they left we decided we didn’t want to spend Saturday night moored outside a pub, so pushed on to Hest Bank. On the way we had a cheeky stowaway… 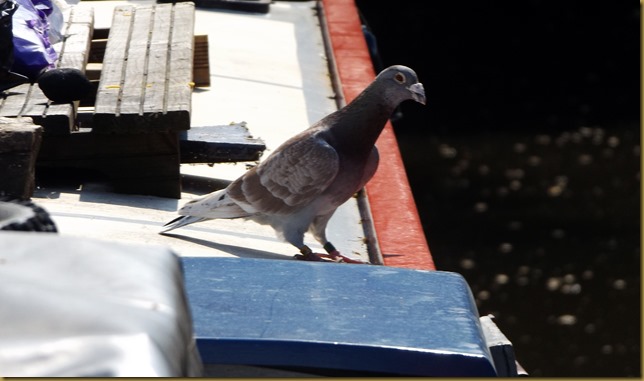 He was very tame, toddling towards the stern to give me the once over… 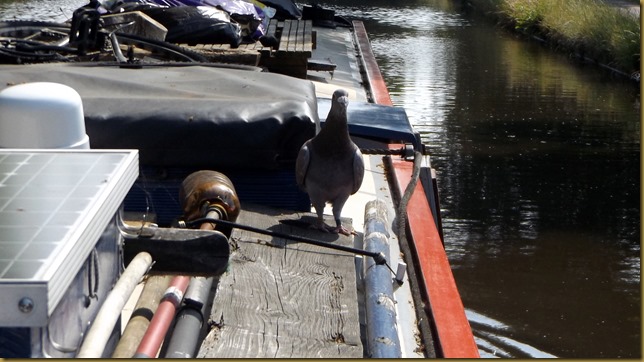 Deciding I had nothing to feed him with he headed back towards the front, hanging about for another few minutes before taking off and disappearing into the distance. 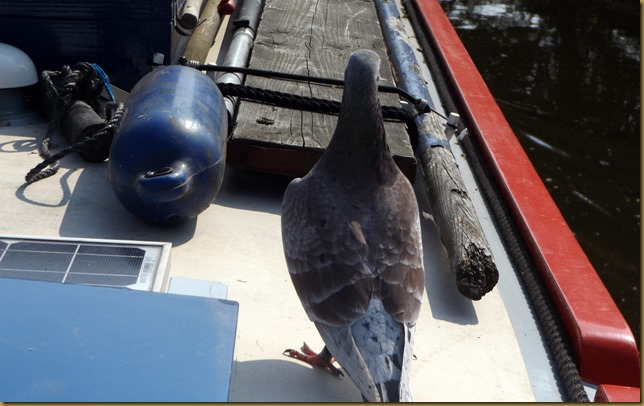 We arrived back at Hest Bank, tying up at quarter past five. 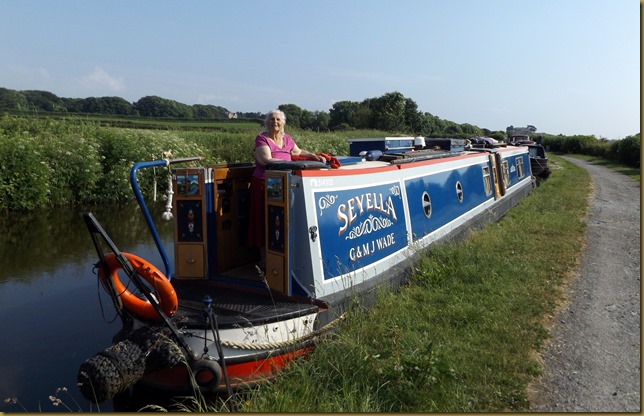 Very late for us, but we did stop for about three hours in the middle of the day. 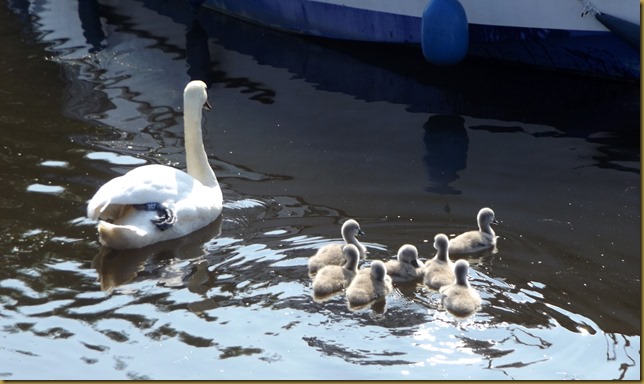 As well as the cygnets, I just spotted a couple of moorhen chicks lurking on a reed mat near Bolton-Le-Sands… 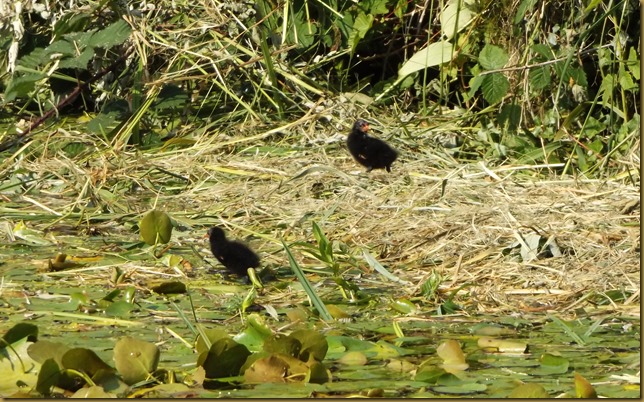 First ones I’ve got a picture of this year!

Sunday we spent at Hest Bank, with a flying visit from Mags’ son Howard as he was passing in the afternoon. Then Monday we were heading off again, towards Lancaster and Galgate. It was a beautiful morning, clear enough to see the South Walney Lighthouse across the bay to the west, and further out, just peaking over the horizon, part of the Walney Wind Farm. 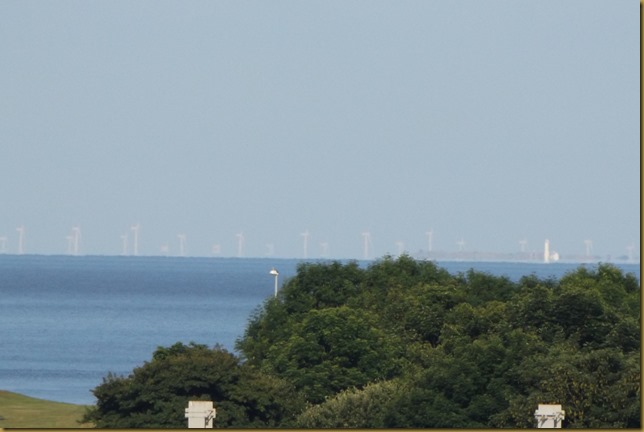 The lighthouse is 15 miles away, and the windfarm is half as far again. The installation consists of 103 turbines, covering an area of nearly 30 square miles. 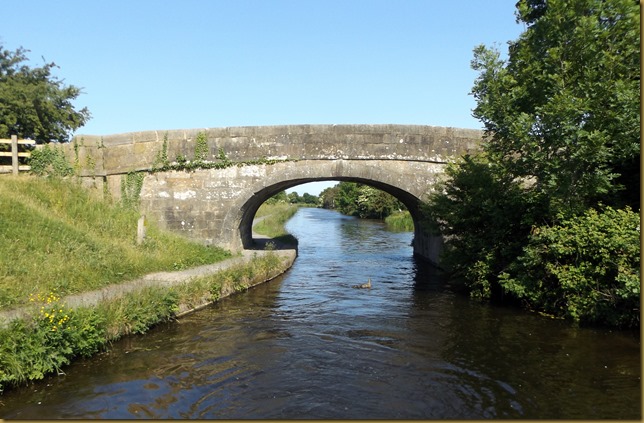 The canal appears to be heading directly into Lancaster at Skirton, but abruptly turns to the east then south-east to cross the Lune. I guess that was the most advantageous point to cross the river.

Under Halton Road Bridge, with the Lune Aqueduct ahead. 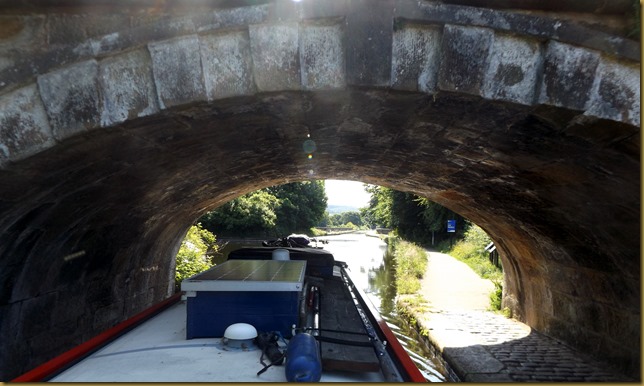 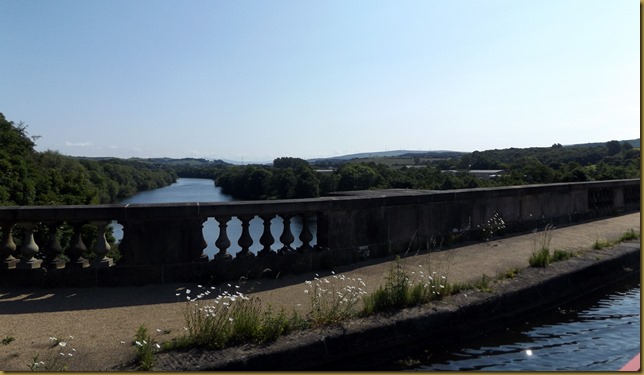 We pulled over on the moorings in Lancaster for an hour, I had a bit of shopping to get, before we set off again, heading for Galgate. 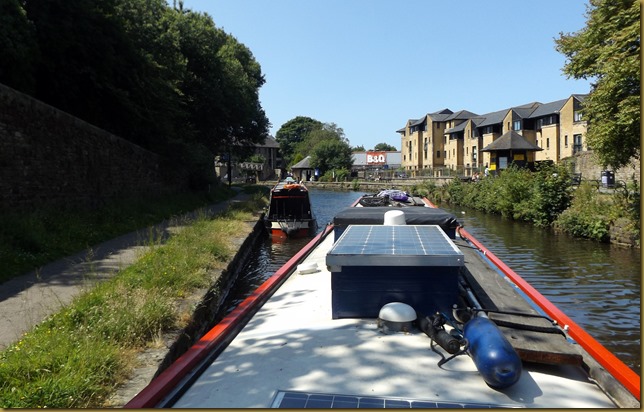 Looking back at the moorings from the footbridge, the redeveloped Chancellors Wharf on the left and the Water Witch pub on the right. 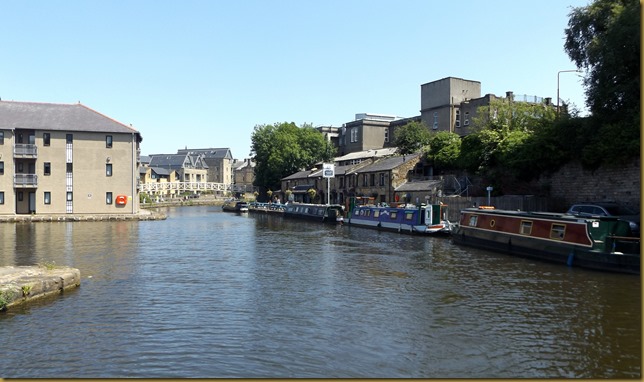 Out of Lancaster again and into Deep Cutting. 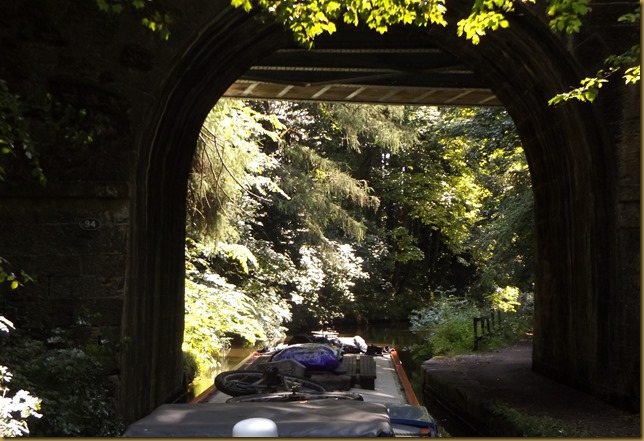 On the way north we were plagued with horse flies through here, and today was no different. This one’s making a meal of my ankle… 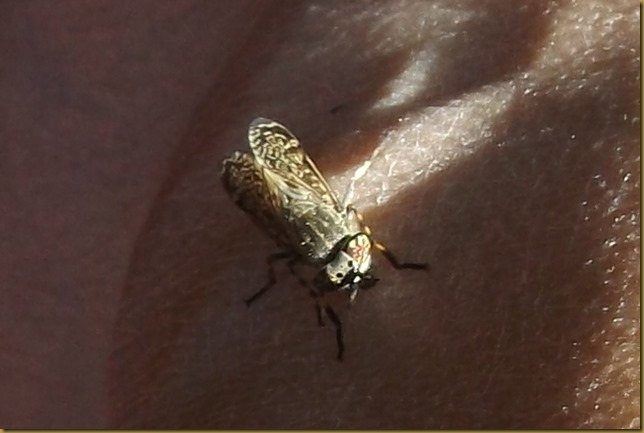 He didn’t survive long enough to digest it though!

We pulled in at Galgate at around 2, Val arrived for a fleeting visit as she was passing at 3, then Steve and family came to see us again after the kids finished school.

Steve and Anne-Marie, with young Luke and Courtney. 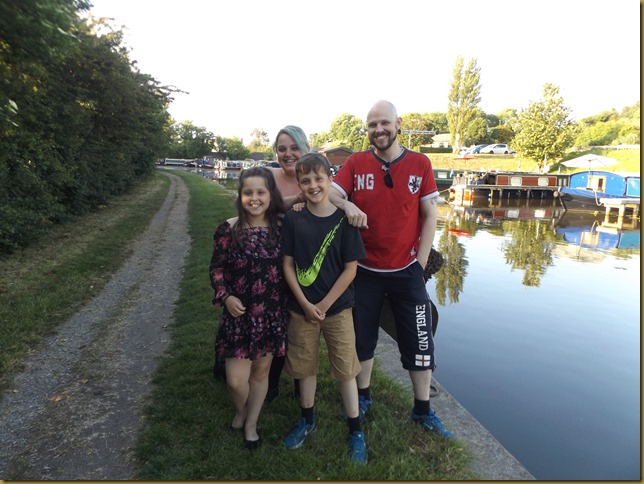 We were going to move on yesterday, but we got a call from Mags’ grand-daughter Melanie who had the day off work and wanted to come over. So we stayed put and entertained again. It’s lovely to see family, isn’t it.

This morning we continued our southbound journey, passing the junction with the Glasson Branch.

Glasson Junction Bridge, with First Lock visible through the arch. 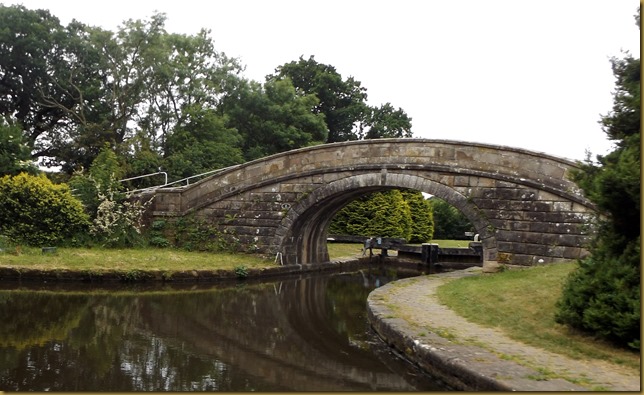 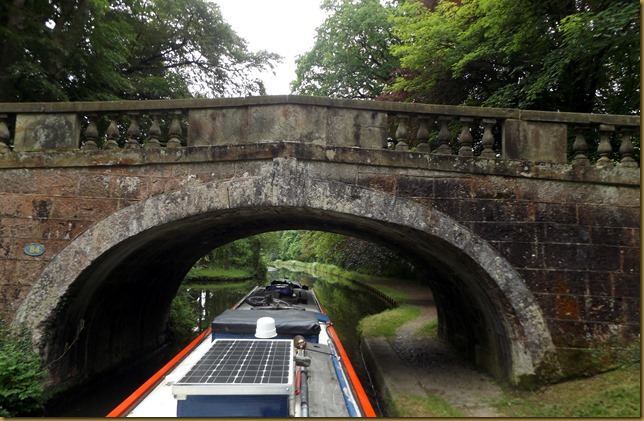 The alpacas were out again at Potters Brook… 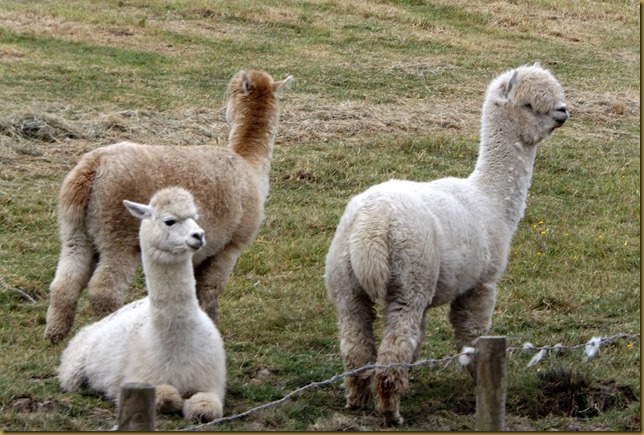 Another fine day, but cloudier and cooler. 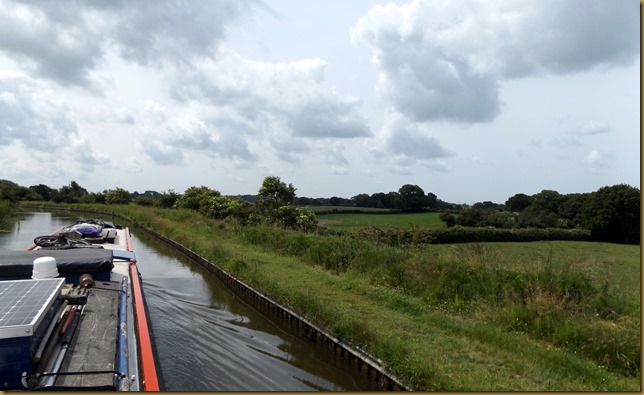 Not many boats about today, but of course if you do meet one, Sod’s Law says it has to be in an awkward spot… like Cabus Nook. 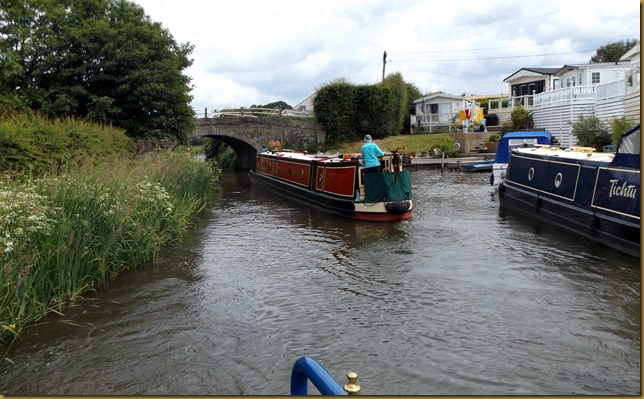 Luckily a chap on the bank warned the other boat and he held back to let us through the blind bridge. 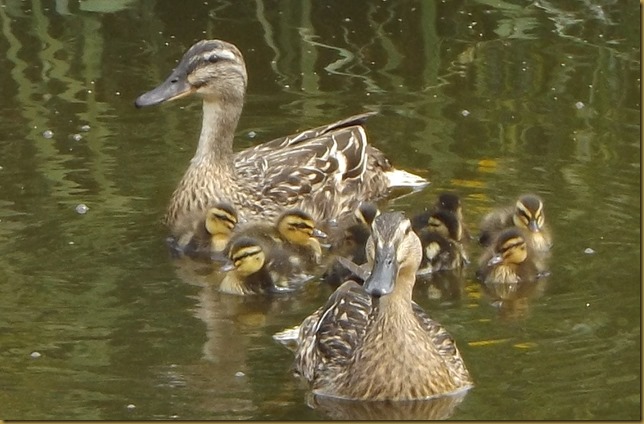 We pulled in about half an hour from Garstang, looking out over the countryside rather than rooftops. 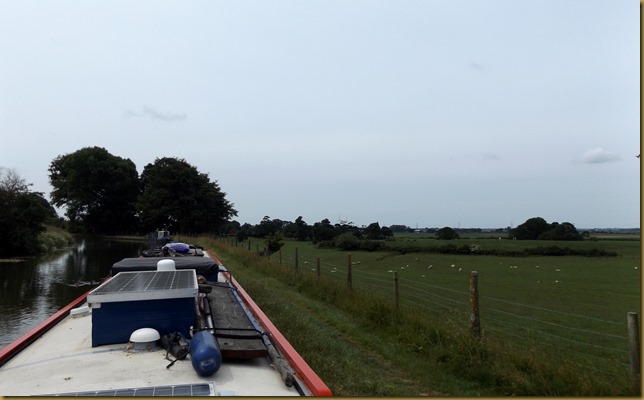 Although it might not be such a good spot with Storm Hector on his way… Still, everything’s strapped down and we won’t rock much. We’re sat on the bottom as usual!

There’ll be a few folk changing plans now I guess…

We’re writing to let you know about a culvert failure that occurred yesterday evening (12 June) on the Leeds & Liverpool Canal. The canal is currently closed to navigation from Bridge 10 (Holmes Swing Bridge) near Burscough into Liverpool. Working through the night we’ve been able to build a clay dam at Bridge 10 and now water is flowing back into the canal. We’ll be working throughout today to secure the culvert and install dams either side of it.
We will have teams on site throughout the day to help those immediately affected. As we find out more we’ll post updates to this dedicated webpage. If your boat is on the same pound as the breach but are yet to hear from us, please call 03030 404040. Thanks for your patience as we work to make this wonderful stretch of canal fit for navigation once more.

So, Liverpool Docks are inaccessible for the foreseeable. I wonder if those already there will consider the way back across the Mersey?

The moorings in the old quarry arm a little north of Capernwray are on pontoons and there's no problem mooring there. They are probably some of the deepest draughted moorings on the Lancaster Canal.

They are, however, a little remote for access by land so, for example, getting an ambulance near to the boat is impossible if any one should need one.