Around Birmingham and back out into the country.

Yesterday was a long one, even though we called it a day at Star City. We left the moorings at Catherine de Barnes at around half-eight, following our journey of just under a week ago into England's second city, what used to be known as the workshop of the world.

From the late 18th century well into the mid Victorian period massive changes in England, socially, economically and scientifically drove the Industrial Revolution, centred around the Black Country, and made England the most productive country in the world. Improved transport supported this revolution, initially by canal, latterly by rail.

The Birmingham Canal Network was incredibly busy, coal and raw materials coming in, finished goods flowing in the opposite direction. All a lot quieter now. Just as well, the current condition of the locks wouldn't cope with the traffic of 150 years ago.

Anyway, we travelled slowly north west, the first 5 miles or so thankfully mainly in a tree fringed cutting before then canal runs into more open country as it reaches the industrial fringes of the city.

Calan Lan following us under the trees. 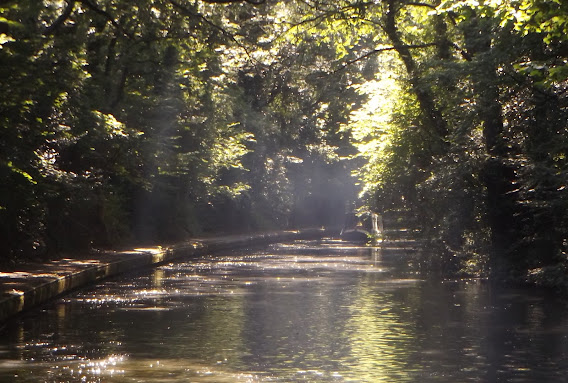 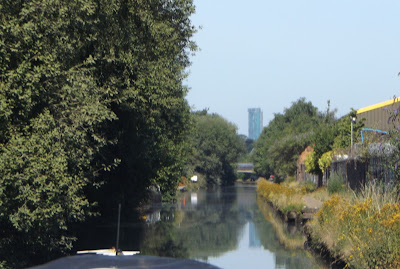 I think the tall structure ahead is the Quayside Tower on Broad Street.

After the activity centre, Ackers, the canal passes between the suburbs of Sparkbrook and Small Heath. At the turn of the 19th-20th century these were mostly housing, but notably, close to the canal near Bridge(s) 88 was the Birmingham Small Arms Factory.

The factory was established in 1861 to manufacture rifles, and its first major contract was for 20,00 infantry rifles for Turkey 2 years later.

They diversified into bicycle production in 1880, producing a machine under licence before introducing their own design a couple of years later. The factory suspended bicycle production in 1887 to concentrate on a War Office contract for 1200 Lee-Metford rifles a week to update the British Infantry. It wasn't until 1908 that bikes once again started coming out of the factory gates, 3 years after they'd experimented with a motorcycle.

In 1906 the company purchased the Sparkbrook Royal Small Arms Factory from War Office on the understanding that it would produce 25% of the new Lee-Enfield rifle for the military, an agreement that was never fulfilled. The company was struggling financially so concentrated on bicycles at Small Heath, and then motorcycles from 1910. The Sparkbrook factory, meanwhile, had been retooled for an early and unsuccessful motorcar design.

The acquisition of Daimler in 1910 and Lanchester (using the Sparkbrook Factory) in 1930 enabled the company to properly break into car production. Apart from these badges they produced BSA cars in the '20s and '30s.

Throughout the two world wars BSA went back to arms manufacture, producing the Lewis machine gun in WWI and the successful .303 Browning in WWII. Their most recent motorcycle design, the 500cc M20, was also the preferred machine by the War Office in 1940.

The Triumph Engineering Company was bought in 1950 and the collaboration resulting in some very successful models. the 100,000th BSA Bantam rolled out of the factory gates in 1961.

At it's peak BSA Motorcycles was the largest manufacturer in the world, but decline in sales to the USA and the unexpected popularity of imported Japanese machines led the company into financial difficulties. It struggled on, upgrading and modernising the product range, but in 1973 a government-sponsored takeover by Norton-Villiers was announced, the new company becoming Norton-Villiers-Triumph (NVT). The BSA badge was dropped and that was that.

Well, not entirely. BSA Guns operate from a factory adjacent to the original in Small Heath, producing a range of air guns and accessories. So the name, much diminished, lives on...

Meanwhile, back in 2022, we arrived at the top of Camp Hill Locks at just before 11. 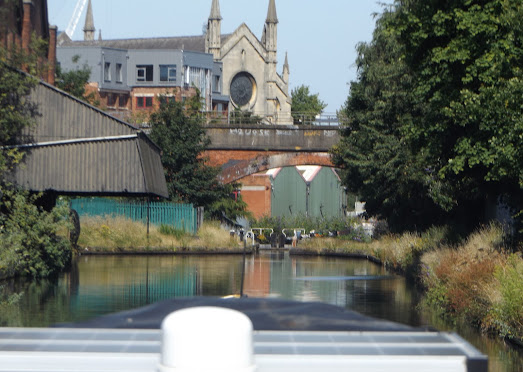 Lock 2 hadn't improved in the intervening week, fragile bottom gates, one bottom paddle unusable and the other on it's last legs, but we progressed down the flight steadily, reaching the bottom at Bordesley Junction after just over an hour.

Bordesely Junction, a right turn takes us down the 5 Garrison Locks on the Warwick and Birmingham Junction Canal, straight ahead is the Digbeth Branch leading to the Birmingham and Fazeley Canal at Aston Junction. 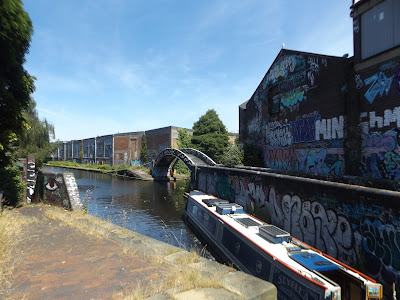 We turned right, to meet the B&F further down, avoiding the Ashted and Aston Locks. 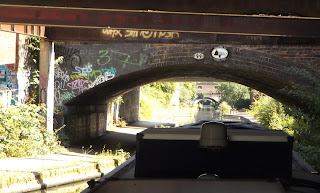 The Garrison Locks are in reasonable condition, although the odd paddle is out of action. The worst is the amount of rubbish accumulating at the locks.

Lock 5 was particularly bad, the towpath and lockside strewn  with rubbish, cans and plastic bottles. All soft drinks, so I guess it's a favourite haunt of the local youngsters. 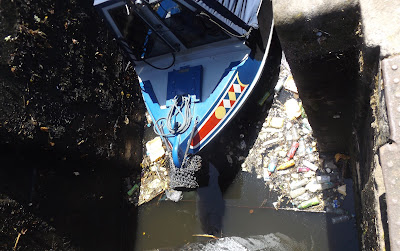 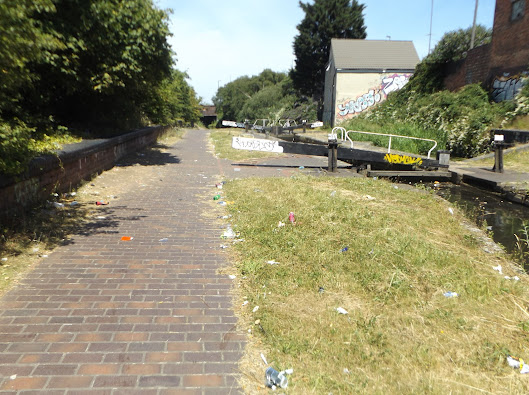 With Lock 5 left behind I was glad to see the pontoon mooring at Star City appear just beyond Cuckoo Road. 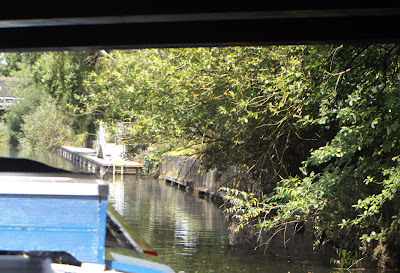 Five and a half hours in very hot conditions was enough, so we called it quits here.

Today saw us leave a little later, with a short, easy day ahead.

Leaving Star City the canal narrows at the site of a stop lock, a common structure where one canal meets another to prevent loss of water from one companies navigation to another. Tolls from passing boats were often collected at these points too. 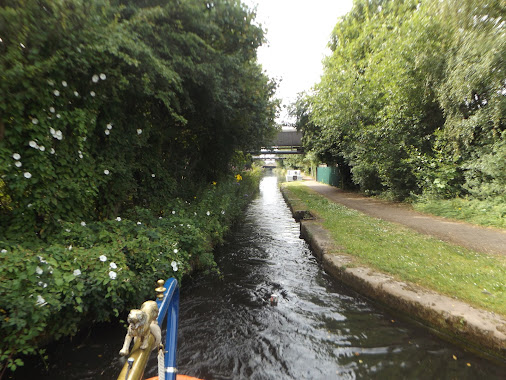 The W&BJ ends at Salford (Saltley) Junction, a hard right turn takes you north-westwards on the Birmingham and Fazelely up to Fazeley to join the Coventry Canal, a left and left again heads into the city proper up Aston Locks, and a single left heads out north to Wednesbury, Walsall and the coalfields on the edge of Cannock Chase. 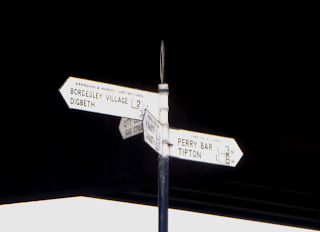 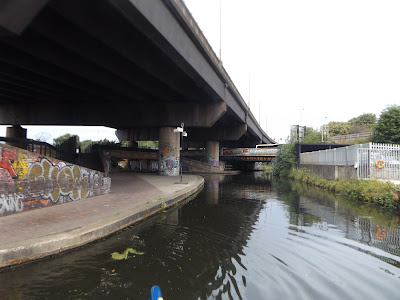 It's an involved canal junction, but not as much as the Gravelly Hill Interchange (AKA Spaghetti Junction) overhead.

Trying to take pictures of the signpost and both directions as well as steer around the sharp bend didn't go well, I finished up hauling the stern around by hand, but then I was off, following Calan Lan to Minworth and out into the fringes of the city.

Just around the corner the canal passes under a factory, a bit gloomy but the scent of the buddlea flowering at the far end made it more pleasant than it might have been. 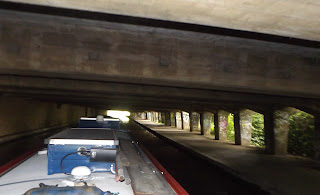 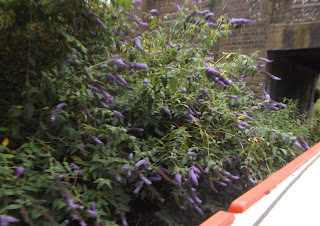 It's about an hour to Minworth Top Lock, the first of three, and where I caught up with Ian and Caroline.

Teeth or trousers, I wonder... 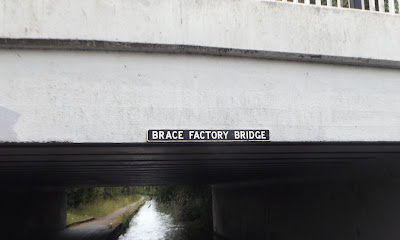 The Birmingham and Fazeley Canal Company named their bridges, rather than the more common numbers.

The lock was in poor condition, slow to fill and empty with only one partially clogged paddle working at the top and only slightly better at the bottom.

It took both boats about an hour to get through, but the remaining two were much better. 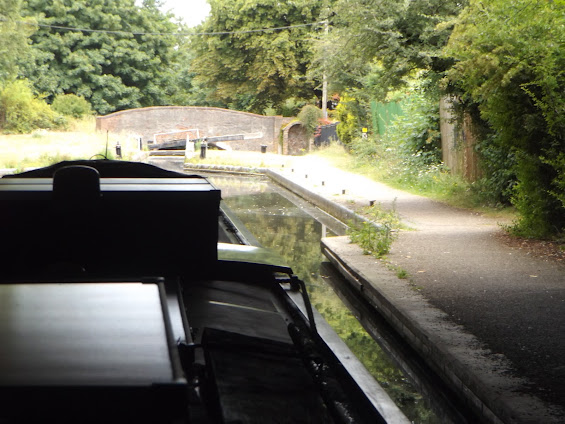 Ian and Carol had stopped for water so I'd overtaken them, giving me the advantage of boats coming up.

The built up area is finally left behind not far below the last lock, there's still a busy A road to the right but at least there's fields to the left.

We pulled in on the moorings outside the Cuttle Bridge Inn and later in the afternoon had a much-deserved pint or two at a table outside. 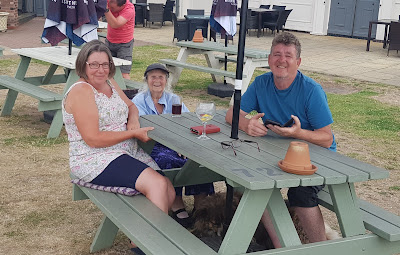 I should have taken the shot from the other direction, Mags looks like a child from here! If you look closely you'll see Amber under the table.