A wiggly way to Wolverley…

We decided to move on from Kinver today. Although we left behind boats that were there when we arrived, we’ve already over-stayed on what are officially 24 hour moorings.

It’s a pleasant place, is Kinver. I was disappointed that the butcher had sold out of pre-war recipe sausages, though. These were recommended by Bruce on Sanity. Made do with their premium sausages instead, and those were pretty good. I’ll try again on the way back up, if we stop.

Leaving Kinver. I wonder if some of these boats will still be here when we come back up… 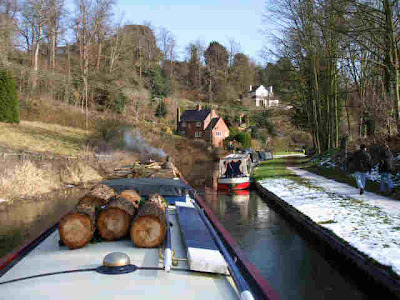 Another sharp frost overnight left ice on the canal, but we’re getting quite blasé about it now. In previous years we’ve been affected by ice only a couple of times, but this year it seems to be the norm. It was only thin anyway, and by the time we got to Counsall Bridge we were able to follow the channel made by a boat which had been moored there and left before us.

Whittington Lock was the first encountered, after about 25 minutes. Alongside is Whittington Lock House, on the market for a while now. Word on the towpath is that the asking price is unrealistic, but the Estate Agent’s bumf in the window in Kinver is just asking for “offers”.

Poodles on parade at Whittington 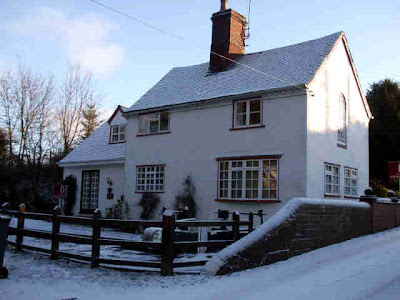 The bywash from the top of the lock actually runs under the front room! Puts a whole new meaning on “hot and cold running water”. It goes under the little bridge on the bottom left.

That familiar sandstone ridge is very much in evidence at Austcliff. At one time it overhung the canal, but was removed for safety. It still looks a bit dodgy to me…. 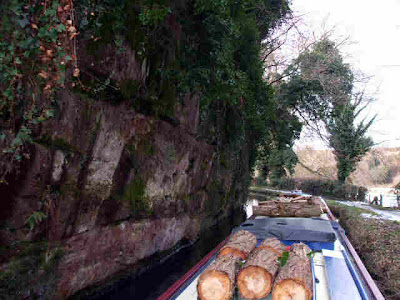 Moving on, Cookley Tunnel is just around the corner, this one a semi-respectable 65 yards long, though still not meriting lighting up the tunnel lamp. 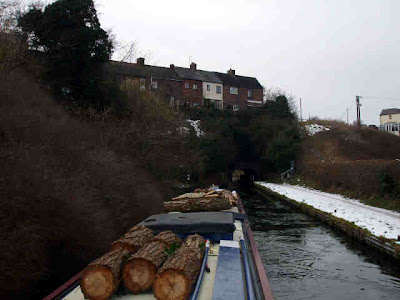 Another couple of tortuous bends following the river on the right and Debdale Lock is reached. Like Rocky Lock further north, this is cut into the rock, with recesses for the gate balance beams to swing through. 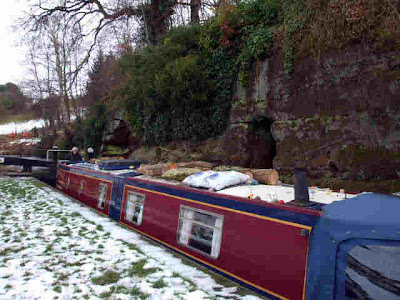 Unlike the other, though, this has a chamber hewn into the cliff on the offside. You can see the doorway half way along on the above picture.

It is rumoured to have been cut to provide stabling for boat horses. It runs 10 or 12 feet either side of the entrance and about 8 feet into the rock. 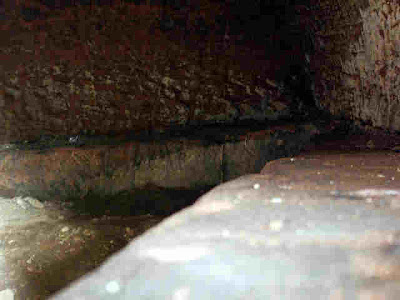 More bendy bits, including a tight hairpin, and we arrived at Wolverley, just as the weather broke and it started to rain. RAIN! I don’t think we’ve had any of that for a couple of weeks.
The lock seemed to take ages to fill so we could go in. Like the other 2 today, it was against us. We were watched by a couple having lunch in The Lock, alongside. Dropping down and out under the busy road bridge, we pulled in on the visitor moorings. Not a good choice though. The mooring is OK and handy for the village, but we can only get Channel 4! Mags is missing Dancing on Ice! You’d have thought she’d have seen enough of that recently….
Still, I could watch Time Team, so every cloud…

As the afternoon wore on and the temperature dropped, the rain turned to sleet, then finally to proper snow by about 16:30. I took Meg down to the next lock, Wolverley Court, to find that this is set in open fields, with a far better chance of getting a TV signal. And it’s only ½ a mile away! Too late to move by the time we got back, we’ll shift that far tomorrow. It’s quiet there, and I’ll be able to slice some of the logs up off the roof. 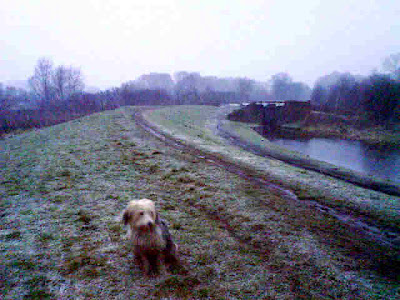 Then Tuesday, which is promised to be nice, we’ll do the last few miles to Stourport. 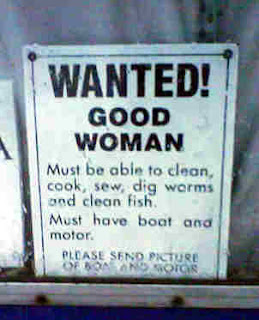 Moored just down from us is NB Anoushka. Clearly she has an optimistic owner…

Just thought I'd point out that one of those boats at Kinver (and maybe others, I don't know) are paying BW £25/week to stay over a few winter weeks there. All's not what some assume...

wonderful blog. By reading them it keeps my dream alive for when i finally buy my own and start living a nomadic life. lovely pics too. do you have a layout of your boat?

Hi Anonymous
Thanks for putting me straight on that one. And there was me coming over all righteous.....:-)

Hiya Dundustin
Thanks for the comment, it's nice to be appreciated!
Seyella's layout is pretty conventional. She's a 57' Trad, saloon at front, corridor galley (better storage), dinette, shower room then bedroom at the back.