So Long to Sunny Stourport

We had a very hard frost on Wednesday night, cold enough to completely freeze the basin and canal. Of course, this had to be the night I chose to let the stove go out so I could give it a good clearing out. We woke up at 7 o’clock, with ice on the inside of the windows and Meg trying to cuddle down between us.

I got up, hit the start button for the central heating, and had the stove cleaned out and relit in record time.

Last night I had a walk around, and the clear air gave an opportunity for a good shot of the Clock Warehouse 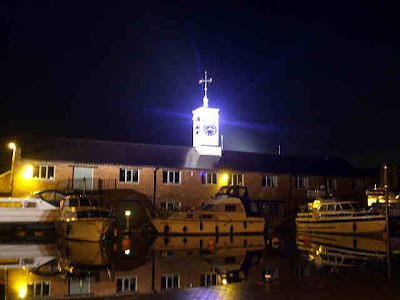 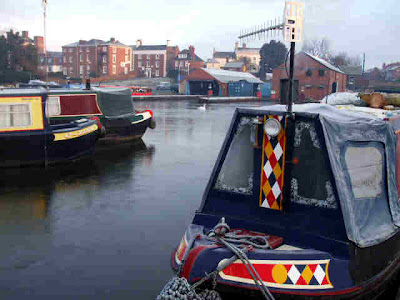 A cup of coffee, and then Meg and I set off for our morning constitutional. We headed off down river, then turned north and up onto Hartlebury Common. This is a SSSI, consisting of upland heath, on sand deposited when the area was under water. It rises to 184 feet above sea level. 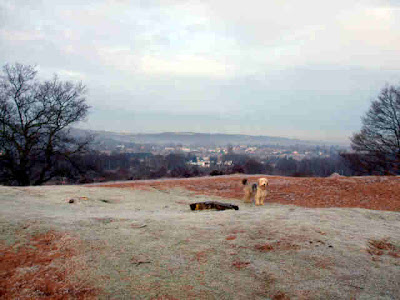 Larch (or Spruce, I’m not that good on trees) Plantation 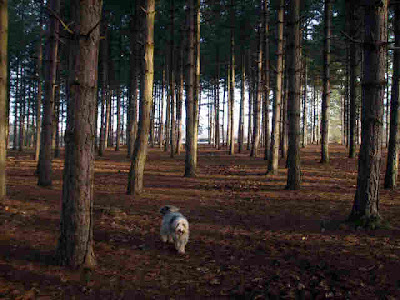 We dropped down the other side, and picked up a footpath running on a dismantled railway line back to the canal. The railway engineers had exactly the same trouble with the sandstone outcrops as the earlier canal engineers. 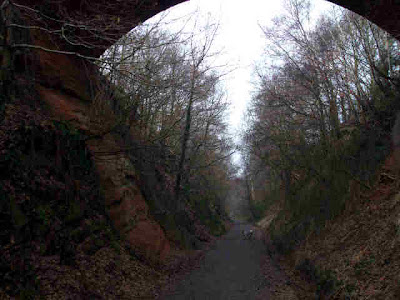 I always think it’s quite ironic that the railways, which in no small way were responsible for the demise of the canals, have in a lot of cases closed, and have been completely lost or converted to cycleways and footpaths. Meanwhile the canals get busier and busier… 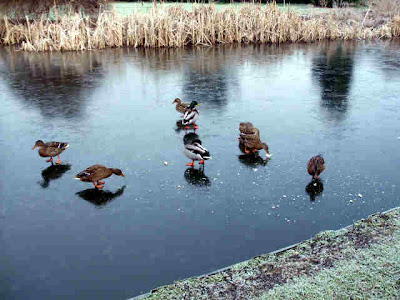 Adam of NB Debdale left a comment on yesterday’s post suggesting I go and see John and Kathy on NB Marmaduke, across the other side of the basin. I’m glad I took him up on it, we met a very pleasant couple. They came and joined us for a couple of hours last night, and we shared a bottle of wine and boating experiences. They had some trouble getting their boat finished; read all about it on their blog.

The weather warmed up considerably later in the day, bringing in some showers, but this morning was dry and bright again.

I had a walk up into the town to post some mail and visit the butcher recommended by John. Wow! I was like a kid in a candy store. I had to restrain myself, but still finished up with 2 different kinds of special recipe sausages, some Black Country faggots, and a lump of topside for Sunday dinner.

A couple of cakes from a baker on the way back, and my life was complete!

The town is very pleasant. Good shops, friendly people. There are no less than 4 butchers!

We untied and reversed back to the SS for water and disposals, then did a U turn and went back up York Street Lock

Back to the lock. 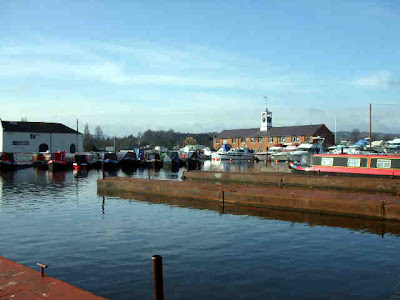 The chamber was empty, just as we’d left it a couple of days ago. No-one else has been up or down since us.

Paul on NB Free Spirit was on the 5 day moorings above the lock. This is his last day, and he was waiting for the owner to arrive to take the boat back. I think he’s a little sad; he’ll miss the lifestyle he’s grown accustomed to over the last 7 weeks. We have another convert to canal life, methinks….
We swapped phone numbers, and promised to keep in touch.

I’d spotted some sawn logs lurking in the bushes near Pratt's Wharf, while out with Meg. It seemed a crime to just let them rot, so we pulled over and snaffled them for the fire. 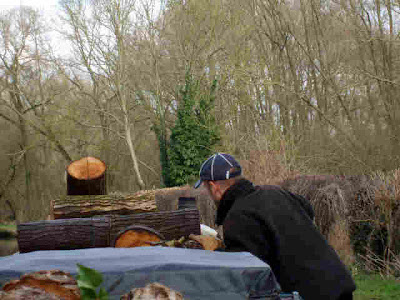 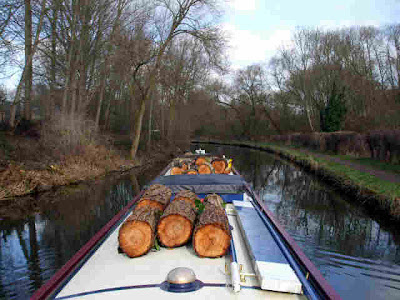 The rest of the trip was uneventful, up the 3 locks through Kidderminster, and then Wolverley Court Lock, to moor just above. I set to, cutting some of the logs into rings for splitting, but didn’t do much before my chain saw blade dulled. It was too dark to continue after I dressed the cutters, so I’ll do some more tomorrow.

It’s been a grand day, warm in the sunny spells, noticeably cooler when the sun slipped behind clouds. But it is only February, after all! And Friday the 13th, to boot!

Oh, and the Pork and Leek sausages are lovely!

Hi Geoff,
Glad you enjoyed the sausages!!
Cathy wishes to thank Mags for the socks...She says they are just the job.
All the best.
Pav.

Forgot to say.....
.....There is another Orchard Marina boat moored up tonight at the service moorings in Stourport. It is called Sogno.
Not sure if it came up off the Severn and will be heading up the Staffs & Worcs...Don't know if you know the owners or not, but if you do, they may be heading your way.
Regards,
Pav.

Hi Pav
Glad the socks are OK. Black Country faggots for tea tonight...
Don't know the owners of Sogno, but have seen her around once or twice. She must have come up-river, so I guess will be heading this way. Will keep an eye open.
All the best, hope to see you both later in the year.

i ahve started my own narrowboat interior design on
http://dundustins.blogspot.com/