Last night started with a frost, but the temperature rose later as some high cloud rolled in. This gave us a duller morning than yesterday, but still fine. The sneaky cold wind that we had yesterday has dropped making it feel warmer. 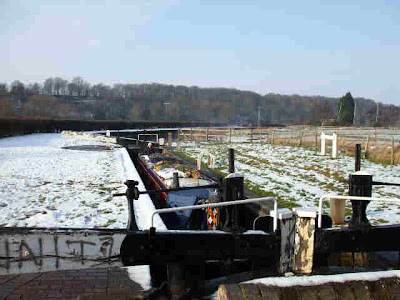 From this point on, the hills on either side of the canal start to close in as the river valley that it follows narrows.
There’s a steep sandstone bank to the left (east) side of the canal at Greensforge. This was an important strategic site in Roman Britain. 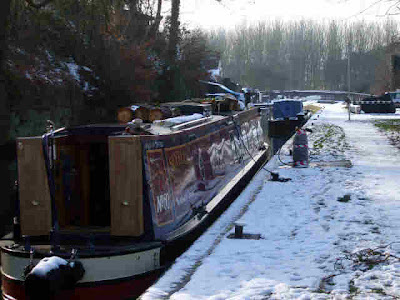 We’d just finished filling the water tank when our delivery arrived, but it took over an hour to get everything put away! It was handy being at the services; I was able to dispose of 2 bags of packaging we’d stripped off the groceries before we stored them. 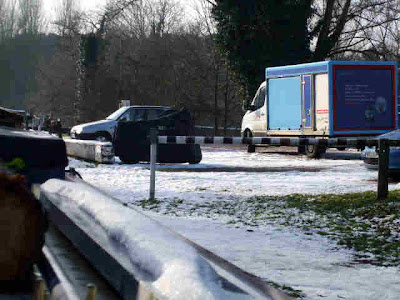 Leaving Greensforge Lock, with The Navigation Inn on the right. 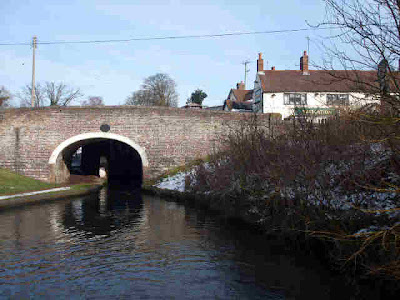 Just a little further on is Ashwood Marina and under the bridge is a real treat as the canal passes the gardens of Ashwood Nursery. They’ll be fabulous in the summer, I’ll bet.
Snowdrops are just poking through, and there’re clumps of deep maroon cyclamen. 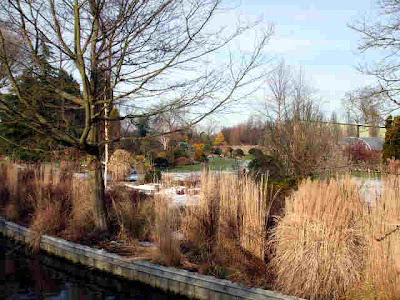 And an unusual herd of deer…. 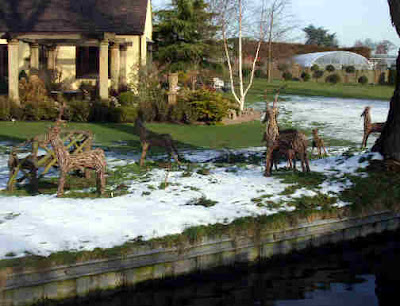 Another ½ mile and we dropped down Rocky Lock. This section of the canal is cut through the sandstone ridge that runs down to the other side of Kidderminster. The Smeeton Brook, which joins the River Stour at Stourton, has cut it’s own meandering valley through the soft rock, and the canal follows it’s eastern side. 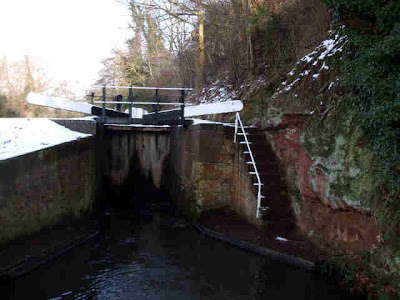 We were looking for somewhere to moor, and a likely spot was just above Gothersley Lock, around the corner. I didn’t expect to get a TV signal on the aerial with the high wooded banks, so was looking for a gap through which to point the dish at the spot in the sky. This was just the ticket, so I set up then took Meg for a long walk.
When we got back we were met by a chorus of barks and growls from across the canal. There’s a house behind the fence and the owners must have let their guard dog out. We decided to drop down the lock and moor just below instead, so at least we won’t get barked at when I take Meggy out for her late perambulation. And it’ll probably save the dog from getting a sore throat….
No satellite signal down here though, but we’ve got an acceptable TV picture on the boosted aerial. 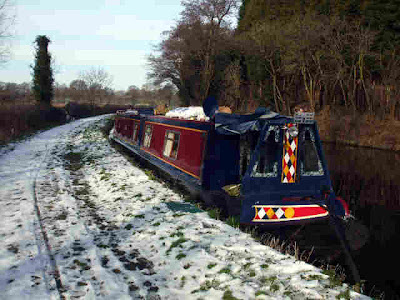 Just heard the forecast for tomorrow and it looks like we’re in for another dose of snow. Showers starting at midnight and running right through till afternoon. So I guess we’ll not be going so far again.