The kindness of strangers...

What was that famous line by Blanche DuBois? "I have always depended on the kindness of strangers" (A Streetcar Named Desire)

Well, I don't depend on it, but I do appreciate it when it's offered!

There are three lift bridges in and around Wrenbury, and we set off yesterday morning towards the first, Church Lift Bridge.

As we approached a boat was coming from the other direction and the crew member on the bank crossed over the bridge, raised it and waved us through. 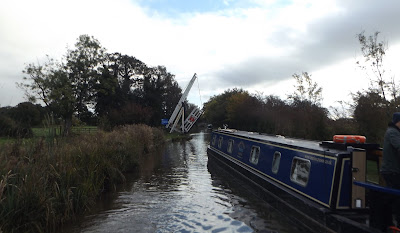 Just along a bit is the mechanised Wrenbury Lift Bridge. It's been recently refurbished with automatic barriers and a towpath-side control pedestal. But it's still time consuming to operate single-handed, as I was yesterday. Mags wasn't 100% so I told her to stay inside. 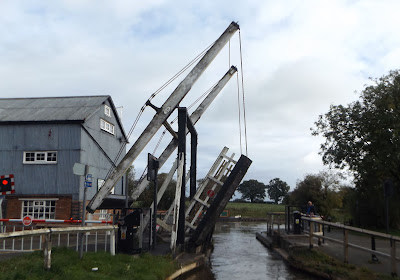 I'd just got tied up and was waiting for a car to cross when a chap with a key in his hand offered to do it for me. I didn't decline...

Leaving the village the next bridge is at Wrenbury Frith. For a long time this on was locked in the open position but a couple of years ago a holiday chalet was opened alongside the canal and requiring access over the bridge. So now it's default position is down. 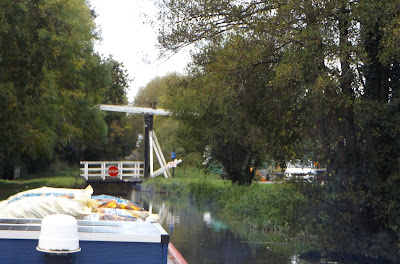 I'd tied up the fore end and was just winding the bridge up when the lady from the plant nursery beside the canal told me to go on through when the bridge was up and she would drop it for me.

I was pleased as the only bit of bank I could use to get off and on at the other side of the bridge was a bed of nettles... And I was in shorts!

It sort of restores your faith a little, doesn't it.

The day steadily brightened as we headed westward, a bit of blue sky appearing through the cloud. 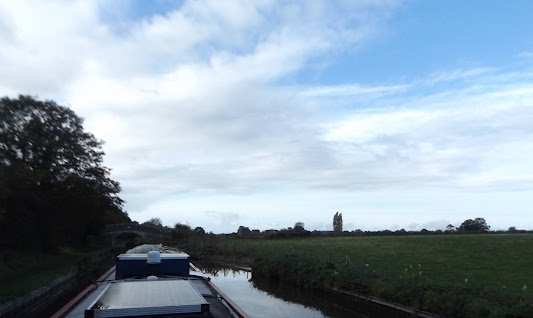 Some stretches of the canal are getting a bit overgrown with reed beds extending out from the offside bank. 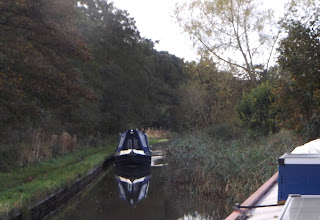 There was a lot of water coming down the bywash at Marbury Lock... 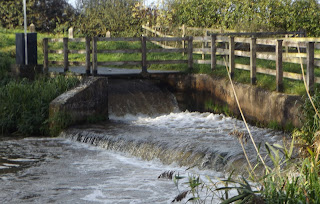 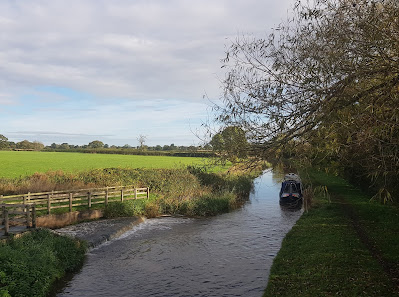 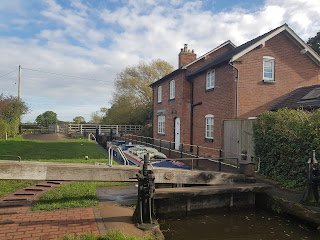 I had to turn the lock, but these narrow locks are quick to slow and empty so it didn't take long.

We pulled in the moorings past Bridge 24, by this time in beautiful sunshine. With the solar panels tilted the batteries were soon topped off.

Please be advised navigation is currently closed at Quoisley Lock on the Llangollen Canal due to a lock gate failure.

Our local team and engineers have been to site and investigated the issue preventing the lock gate from operating. Whilst a method of repair is being organised, navigation will remain closed at Quoisley Lock, on the Llangollen Canal.

A further update will be provided Wednesday 27 October.

Ooh heck, that's the next lock!

We really need to get above to the services above Grindley Brook Locks in the next couple of days else we'll be washing in canal water!

So this morning I decided to move on to the bottom of the failed lock to see what the situation was. On the way we passed a boat coming the other way, a brief shouted conversation told me that they were assisting boats through while they got their gear sorted out. No messing about then, I headed for the lock post-haste.

They'd just let a boat out as we arrived and waved me forward. I untied a batch of stop-planks I'd towed up for them and was in with a rather broad smile on my face.

Still smiling when I took this picture... The trolley jack is to lift the gate back up into position as they close it.

Leaving the lock I passed several boats waiting to go down, mostly hires. There are a few about it being half-term.

I thought about pulling in now that we'd passed the problem, but instead pushed on up Willeymoor and Povey's Locks to moor below Grindley Brook. 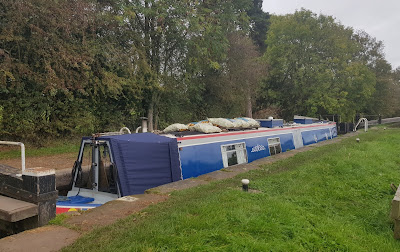 Between the two locks I was pleased to see that someone had cut back the bushes on the towpath side. 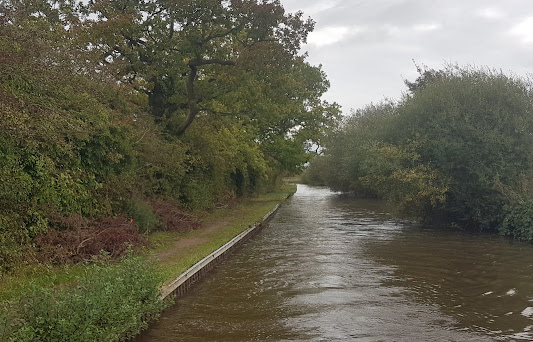 With the trees on the offside it was a slalom run last year!

CRT are starting on repairing Quoisley Lock tomorrow, an update will be issued on Friday. Good job we got through today!

Hi Geoff and Mags. Hope Mags up to 100%now.
I saw that email. was hoping that you had got through as I had read your last post and knew you were heading towards it . Still some kind strangers round . Keep warm and well

Good read Geoff caught up since Cheshire locks post. good luck with the stoppages or are you past them now?

Hi Sue. Hope Mac is better now. As you'll have read we got through the stoppage before the tank ran dry!
Hi Ade All sorted now. At least for the time being...