We set off from Branston Water Park towards the lock, following a couple of boats. 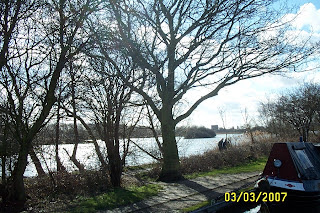 As we arrived the first was just descending the lock, so I went and had a chat with the crew of the second. They are a family of Canadians from Calgary, on a narrowboat for the first time. They’ve hired a boat from Barton Turns Marina, and, apart from the weather, seem to be enjoying their trip.
We passed them in Burton, where they’d stopped to sample the delights of the Marston Brewery.

Hit Dallow Lock just right, with a boat just coming out and another waiting to come up, but as we slowed near the bank, Meg decided it was time to stretch her legs and hopped off onto the towpath! I handed the tiller to Mags, and followed the errant mutt post haste.

By the time we returned, Mags had manouvered the boat into the lock and was waiting for me. Meg was unceremoniously bundled back on board so we could descend the lock. I spent the rest of the cruise to Willington thinking of ways to prevent her from absconding. She’s normally OK, but as we slow down for locks, she assumes we’re going to moor up, and wants to get off. Bruno was the same, at the start.

As we exited the lock, we were told to watch out for anglers on the next stretch. The next stretch turned out to be 2 miles of fishing poles across the cut, held by a mixture of individuals whose temper ranged from the very friendly to the downright surly. One hell of an angling competition! Glad to be clear by bridge 28, and not having to worry about having a very expensive carbon fibre fishing pole attached to a myopic angler wrapped around the bow! (BTW, what is the collective noun for anglers? My suggestion would be a “scowl”. Any more ideas?)

Finished the fine dry day at around 14:45, moored at Willington. Several Canaltime boats were moored near the bridge.

We’ll be stopping here till Monday, the forecast for tomorrow is horrible, with heavy rain and wind.

As a result of the episode with Meg at Dallow lock, I modified the dog gate I made ages ago for Bruno. 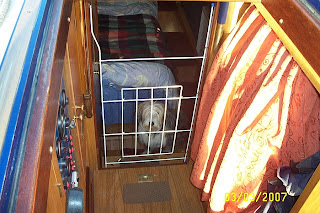