As the forecast for yesterday was for heavy showers, we decided to stay put. The showers didn’t materialise till later, and then were only light. So we spent the day just pottering about on the boat.

We had some occasionally noisy neighbours, though. The sheep were stripping the bark off the fallen branches. 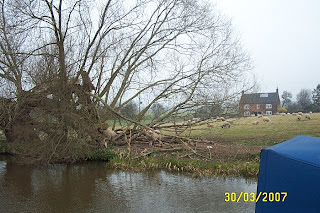 This guy's a long way from home.... Trumpeter Swan, native of N America and Alaska. 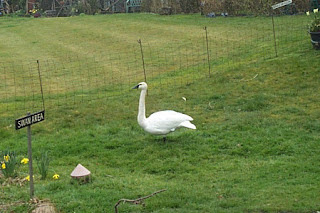 Today started cold and drizzly, but brightened up a bit by 10:00. The East wind was still cold, though. We moved off at around 11:00, towards Great Haywood, where we will stop for the weekend.

BW had been doing some extensive tree felling. The River Trent is just on the other side of the trees. 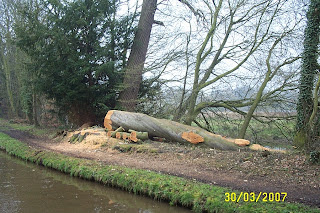 The edge of Cannock Chase 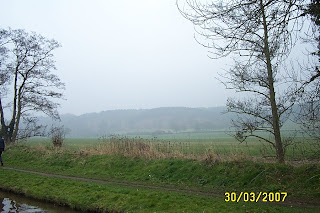 Caught Colwich Lock just right, with a boat leaving the lock as we arrived. No hire boaters around to shut the gates in front of us this time!
The new gates, fitted during this winter’s stoppage program, are very heavy, with short balance beams. The towpath side gate is poorly balanced and swings open again, like Woodend Lock. The trick is to open a top ground paddle part way, then dash back to shut the gate. The incoming water then holds the gate shut and the lock can fill.

We stopped just short of Great Haywood Junction, with a view of Shugborough Hall over the fields. 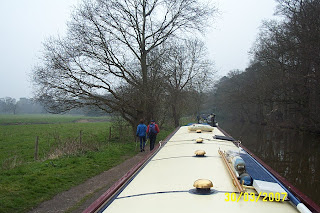