I said I should be posting more often, well I intend to do a post a day while we’re here in the paint shed in Stone. But first, a catch up from the last few days.

Tuesday I concentrated on prepping the gunwales for repainting, just as well as Wednesday’s weather was not exactly outside work-friendly. In fact it rained all day.

I took Meg for a walk up the canal in the morning and met Maggie and Mark (NB Forever Young) heading up to Sandon, and we caught up with them at the lock on the way back. They had a bit of a hold up, we couldn’t get the bottom gates to close.
Mark’s groping around with a boathook revealed an obstruction on the cill, but try as he might he couldn’t lift it out. We bowed to the inevitable and called C&RT, who promised assistance in an hour.

Quite a queue had formed, above and below the lock, by now.

It’s amazing how interesting a man poking about with a long pole can be…. 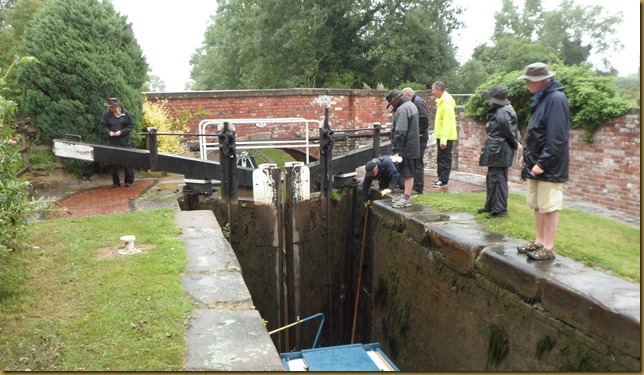 It was Mark, working off the counter of Forever Young, who finally got the offending article out, using a keb off the van. A keb, by the way, is a garden rake on steroids, extra long tines make hooking debris out of the cut a doddle. We should all have one… 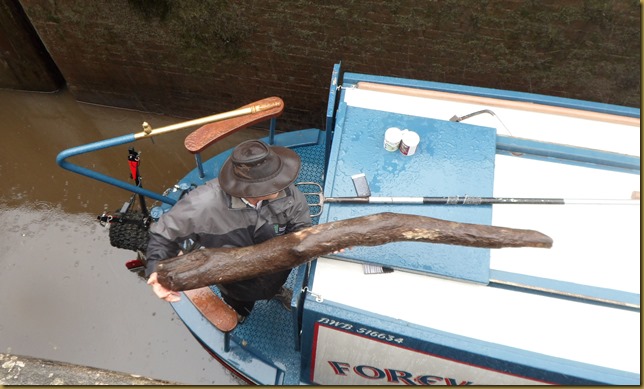 On the roof to dry out for the winter, now.

On the way again. Good to see you both. 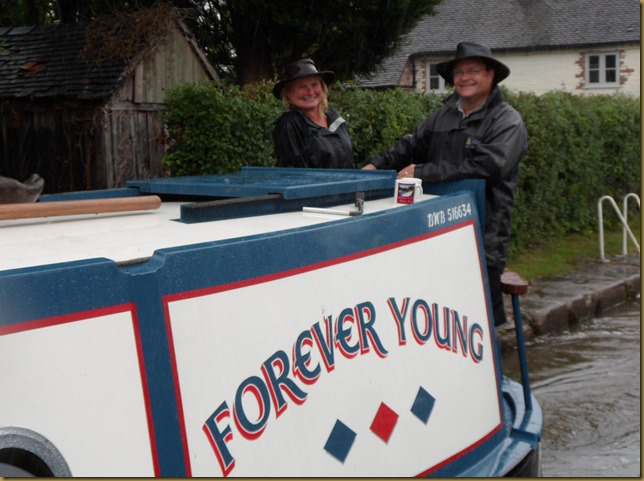 Thursday morning was dry and bright and I got a bit more gunwale rubbing done before we set off back to Stone.

Quite a mixed grill in the field opposite. 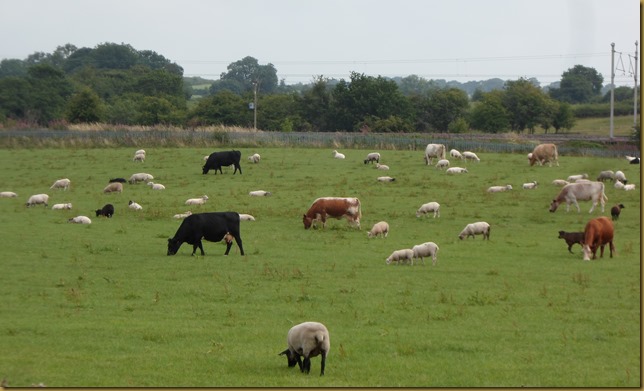 Not sure this guy can see where he’s going… I hope he watches out for low bridges. 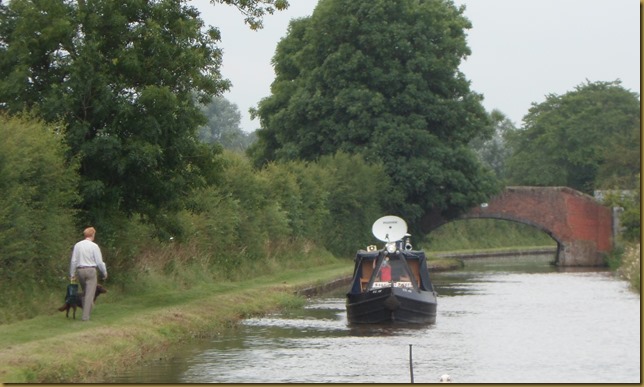 We got moored up for the night below Star Lock, and made the acquaintance of Diane and Ray on NB Ferndale, and Phil and Lyn on NB Valentine. Hi all.

Friday was the big day; into the paint shed at Canal Cruising above Star Lock. So we were up early, dumped the rubbish, topped up with water below Star Lock, and arrived outside the boatyard soon after 10 o’clock.

It was a bit busy, several hire boats had to be moved, then NB Antelope moved out before we could get in. 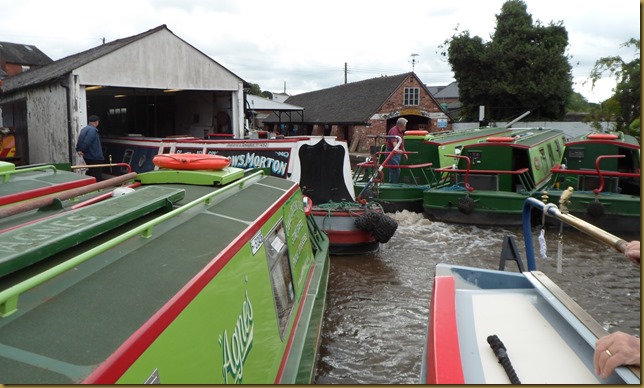 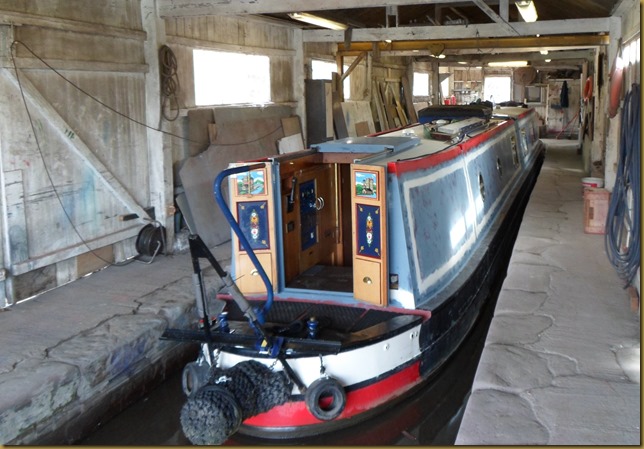 The rest of Friday was spent in removing the “furniture” from the shell; foot-steps, cratch cover clips, ventilators, fairleads, fenders, in fact anything that was screwed down! Then the shell got a thorough scrubbing with sugar soap and a pan scourer before rinsing off with plenty of clean water.

This morning the cabin was wiped down and the handrail and coachlines masked off. It doesn’t sound much if you say it fast, but it took me the best part of 4 hours, and three rolls of tape, before I was satisfied.

All masked up, nowhere to go. 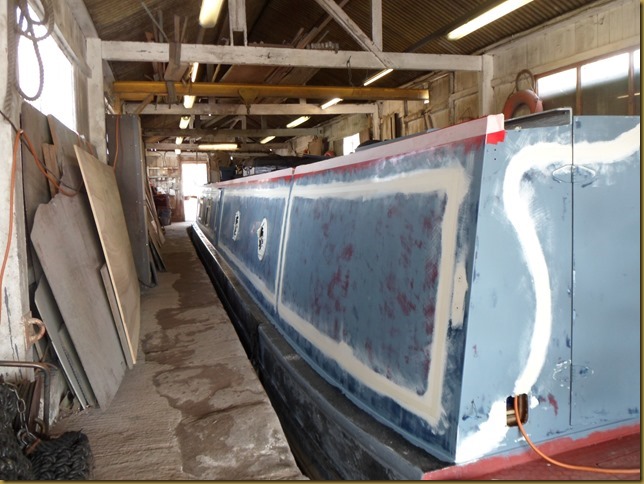 Next job was to sort out the paint, stirring sticks, brushes, paint trays and rollers, as well as white spirit and receptacles for washing brushes. All this paraphinalia was assembled on a cleared area on a bench. Then we were off!

The grey background was the first to put on, and this took longer than I expected. It was only the strip around the outside of the coach lines, but the side hatch doors are also grey and there’s the fiddly job of the hinges. Then there’s the surround around the ear’oles on the back, and the front panel. Anyway, by 5 o’clock that was done.

First coat of grey on, next job the panels 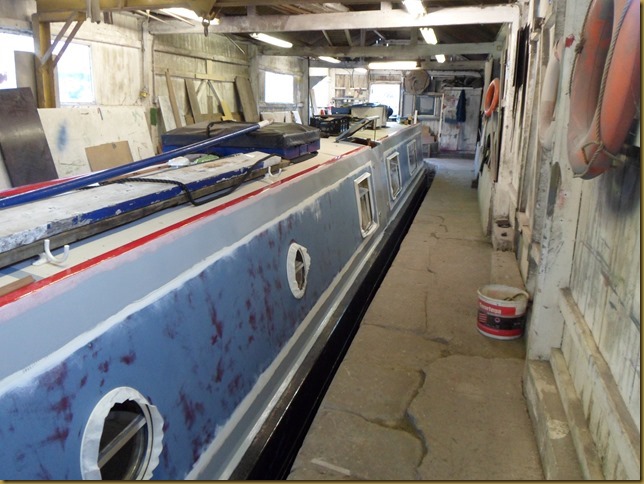 Another 2 hours and the blue was on as well. 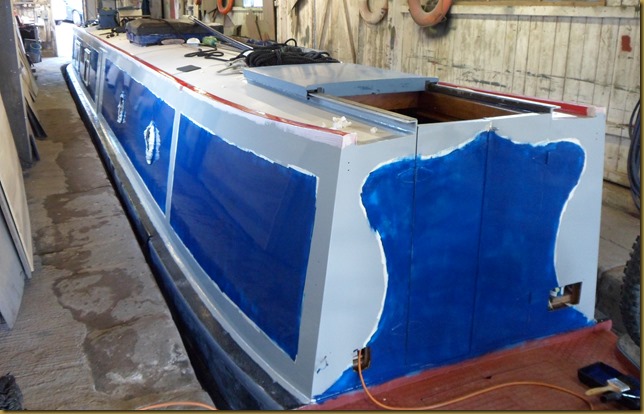 This is the first time we’d seen the shade of blue “in the flesh”, and I’m really rather pleased with it. Also, both colours went on well although the grey covered better than the blue. Not a problem, both are getting two more coats.

And look at that finish! 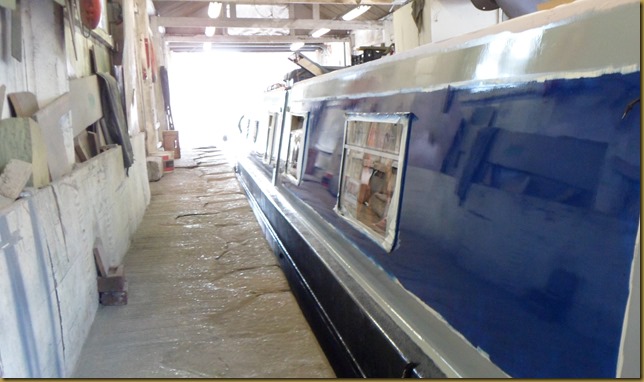 Second coat tomorrow morning, then removal of the masking tape.
Monday morning the whole lot will get flatted with 400 Grit wet and dry, then masked again for the final coat. The last job, on the sides anyway, will be remasking in reverse to put another coat on the coachlines and handrail. That should be Tuesday afternoon, Wednesday morning. Then it’s down to the signwriter to finish off the name panels.
Oh, and in between I’ve got the fore-end, well-deck, cratch board, hatches and counter to paint.  Not forgetting the gunwales…. Doddle.

Who did you decide on for the signwriting in the end?

Hi Geoff, It was nice to catch up with you again. I love the photo . Love to Mags. x Maggie and Mark