A pause and a surprise meeting in Market Drayton before toddling on.

We cruised the short distance to Market Drayton on Sunday, tying up near Bridge 63 at around noon.

Squeezing over a fallen tree at Brownhills Wood. 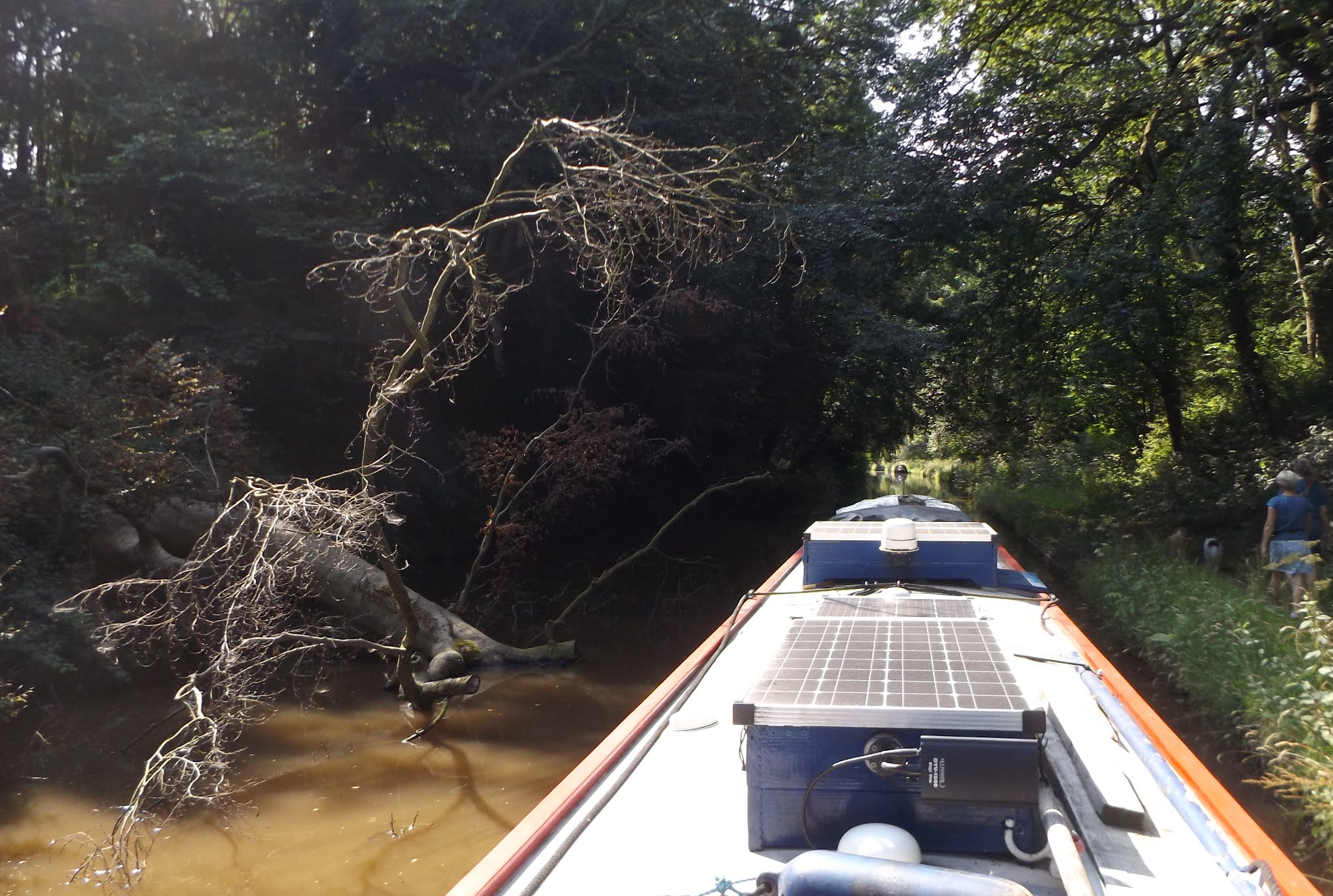 We’d read on the stoppages list from CRT that towpath works were ongoing in the town, supposed to be in stages starting at the far end. So I was surprised to see the section between Victoria Bridge and Lord’s Bridge, where we often moor, fenced off. 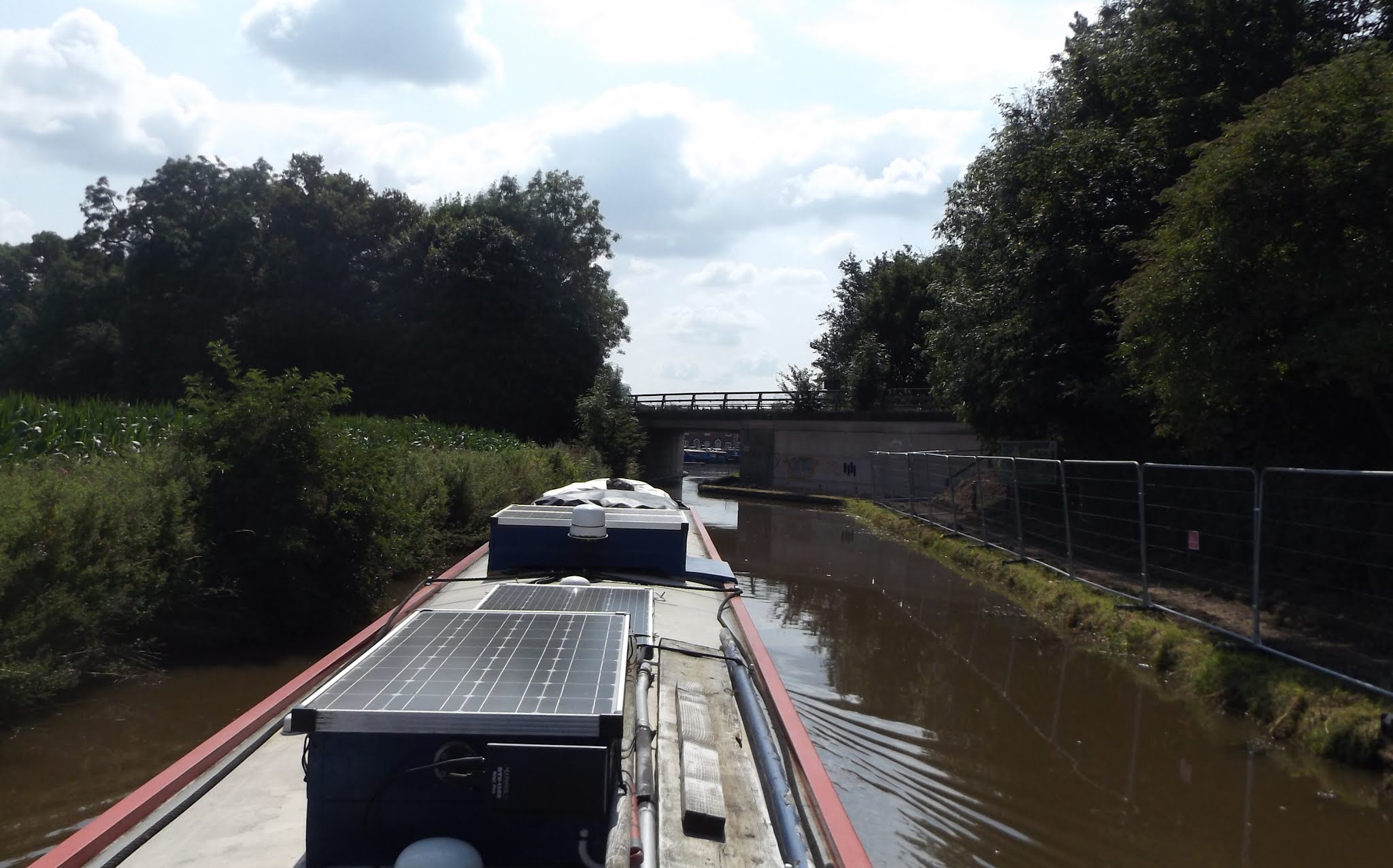 With this section and the 48 hour moorings from Stafford Road to Berrisford Road aqueduct now unavailable I was surprised to see plenty of space beyond Lord’s Bridge. 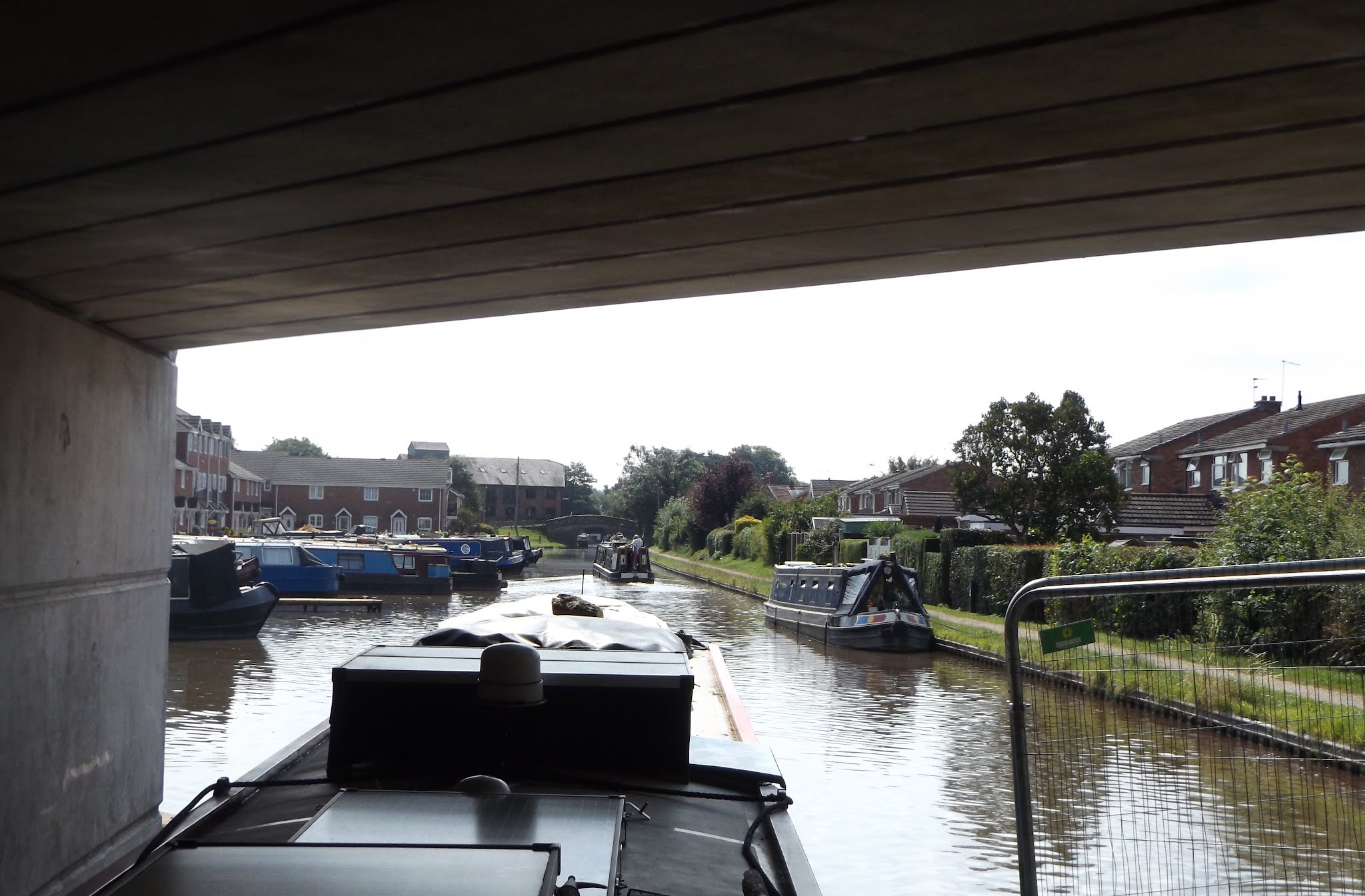 Filled up by mid-afternoon though.

We spent a couple of nights here, then moved through the bridge to the services on Wednesday and spent another two nights near Stafford Road Bridge. It was here that Pete from NB White Atlas spotted us and he and Dawn came to us for a brew, cakes and a good catch-up. We first met them way back in 2014, and our paths have crossed briefly a couple of times since.

With the water topped up again this morning we set off towards Tyrely Locks at just after nine-o’clock. 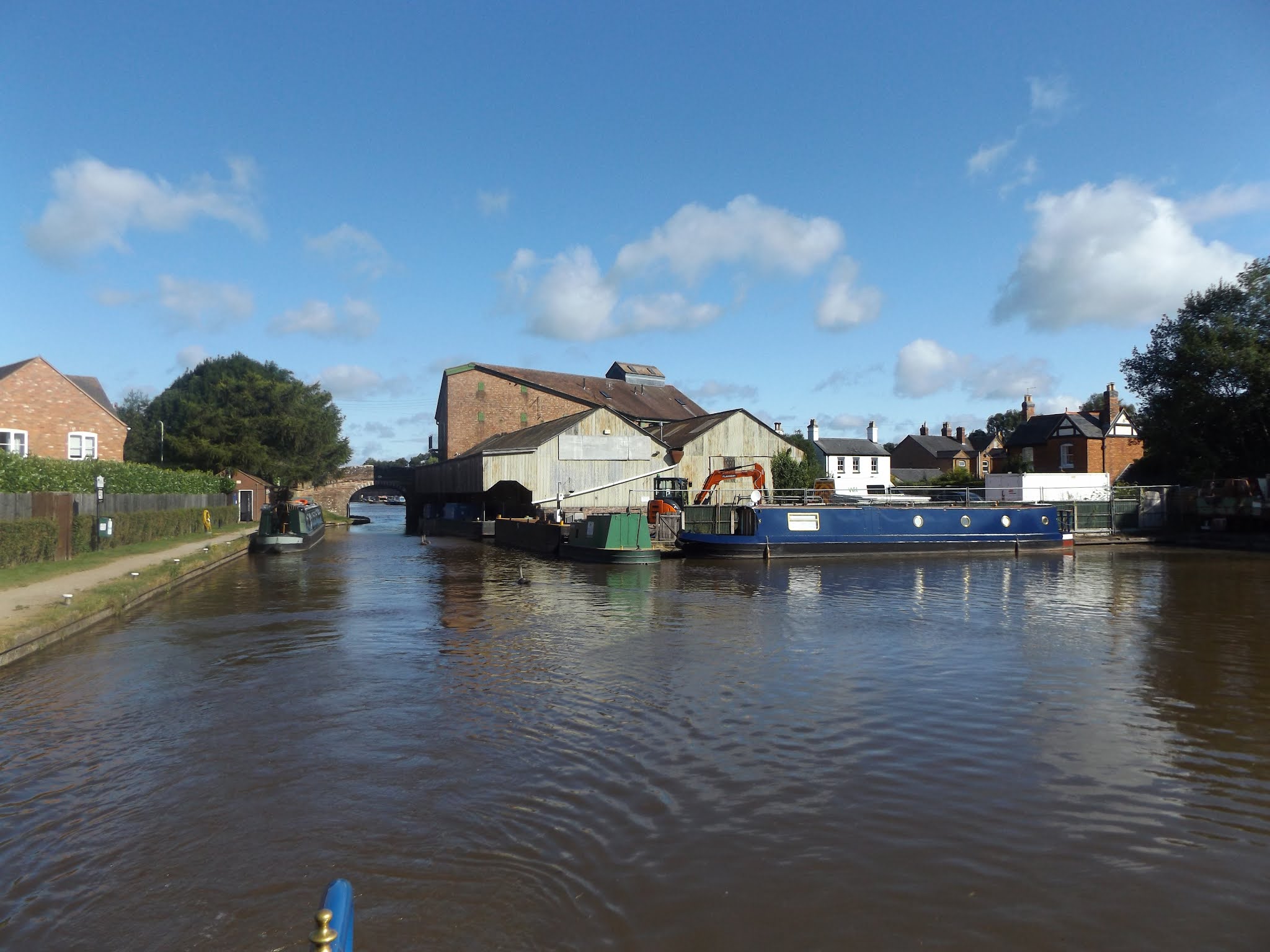 The Birmingham and Liverpool Junction Canal, now known as the main line of the Shropshire Union network, was constructed by 1835. At the start of the railway revolution, the B&LJC was intended to compete with the new upstart. To do this it had to be efficient, using a direct route as much as possible. Gone was the first generation Brindley-type contour canal designed to follow a level as much as possible to avoid the expensive and painstaking construction of aqueducts, embankments and cuttings. Instead Telford surveyed a bold route from Nantwich to Wolverhampton crossing valleys on massive embankments and negotiating ridges in deep cuttings.

Another time-saving idea was to group the locks together into three main flights at Audlem, Adderley and Tyrley. There’s just one odd one further south at Wheaton Aston and a shallow stop-lock at the junction with the Staffordshire and Worcestershire Canal at the southern end.

Tyrley Locks, just south of Market Drayton, is a classic example of this technique. The canal rises 32½ feet through 5 locks in just over one-third of a mile. But the slope it negotiates extends for more than twice that, with a steep-sided cutting leading to the bottom lock and the remaining four following closely.

In the cutting towards Tyrley Bottom Lock. 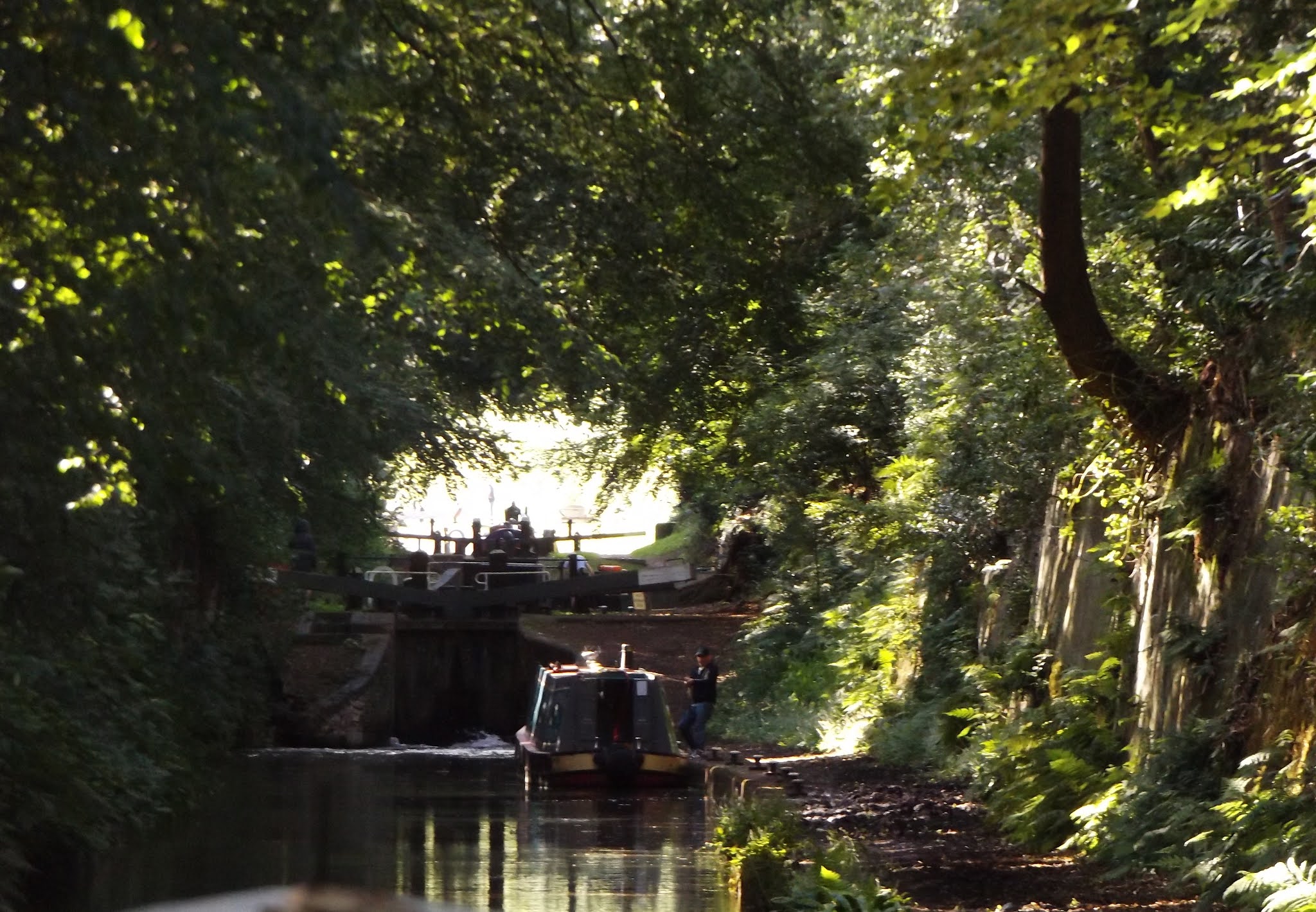 We waited for Richard on the fuel boat Mountbatten to come down, then moved on up ourselves. 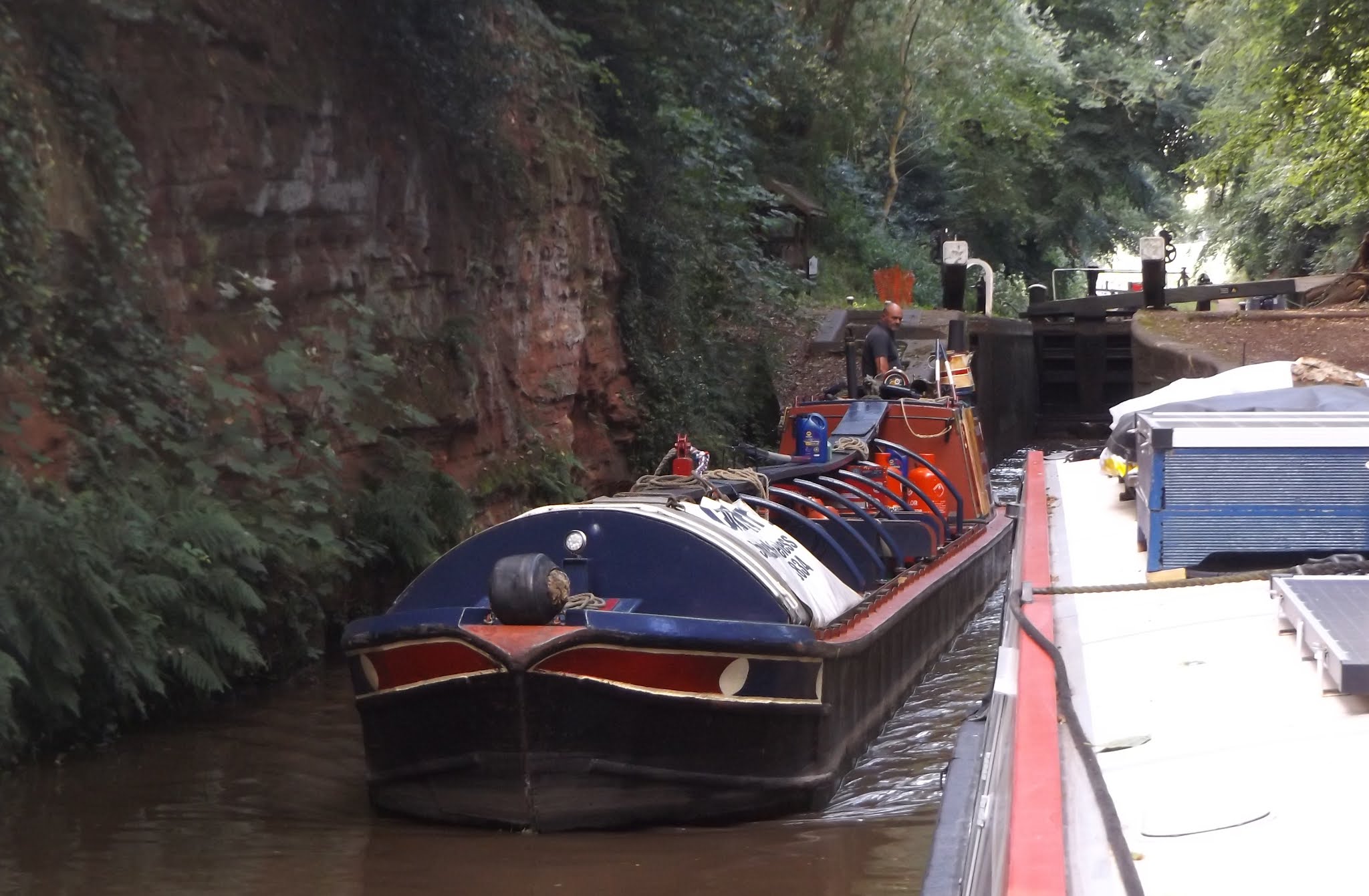 The flight tops out at Tyrley Wharf, with fine canal-side buildings dating from 1840. 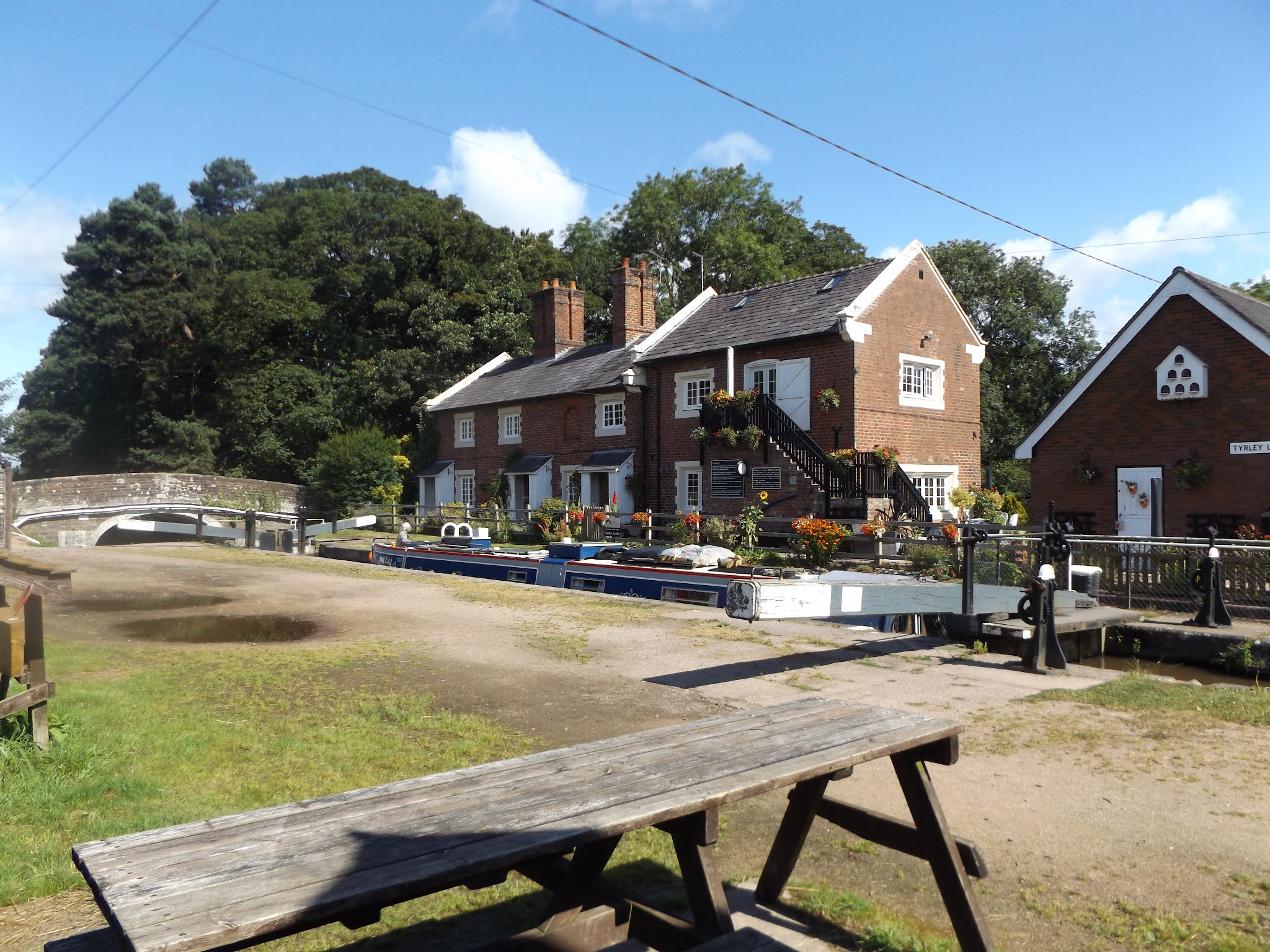 From here the canal disappears into the gloom of the first deep cuttings, Woodseaves. This cutting extends for nearly 1½ miles of narrow, shallow waterway and is around 65 feet at it’s deepest. 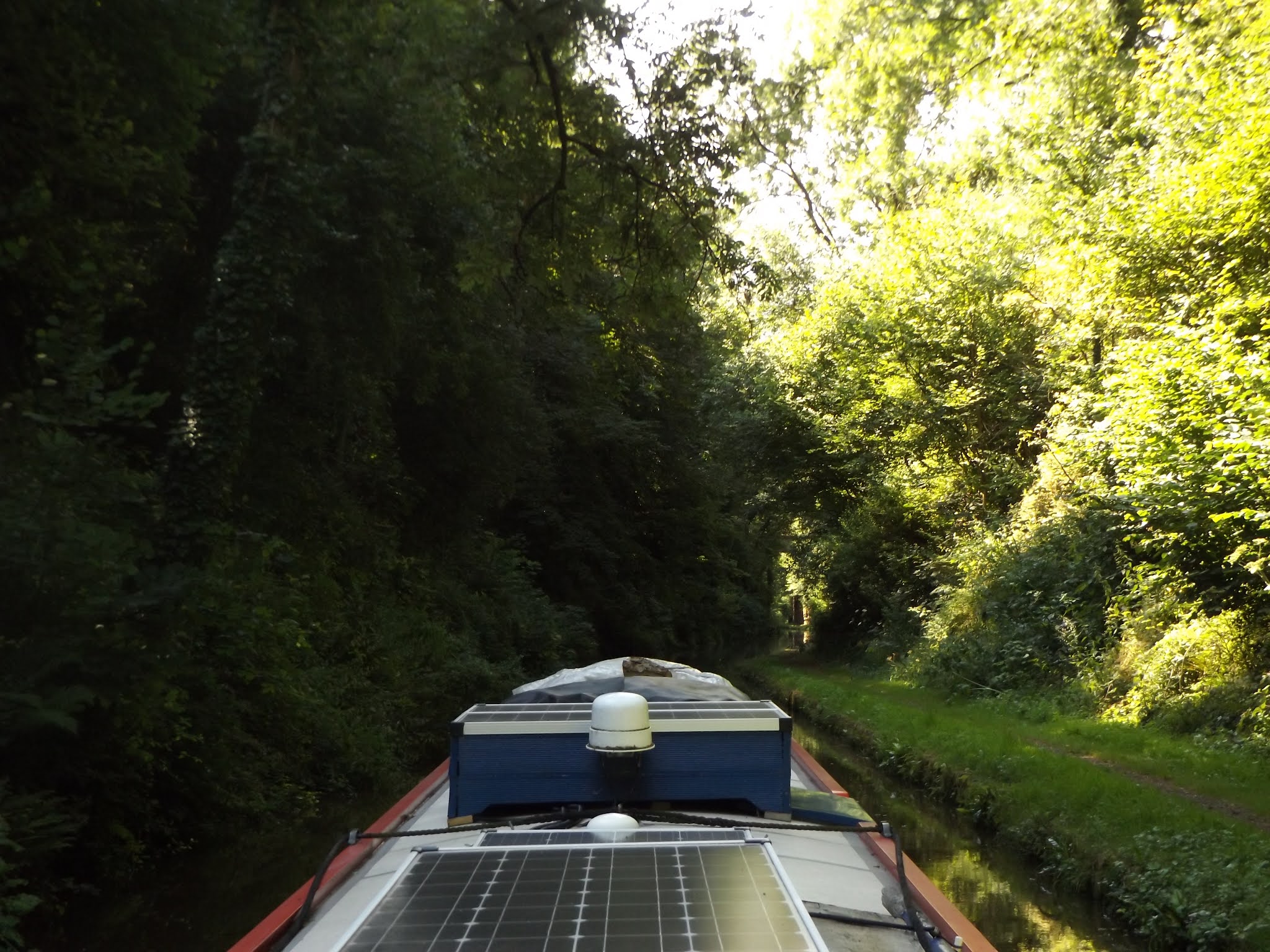 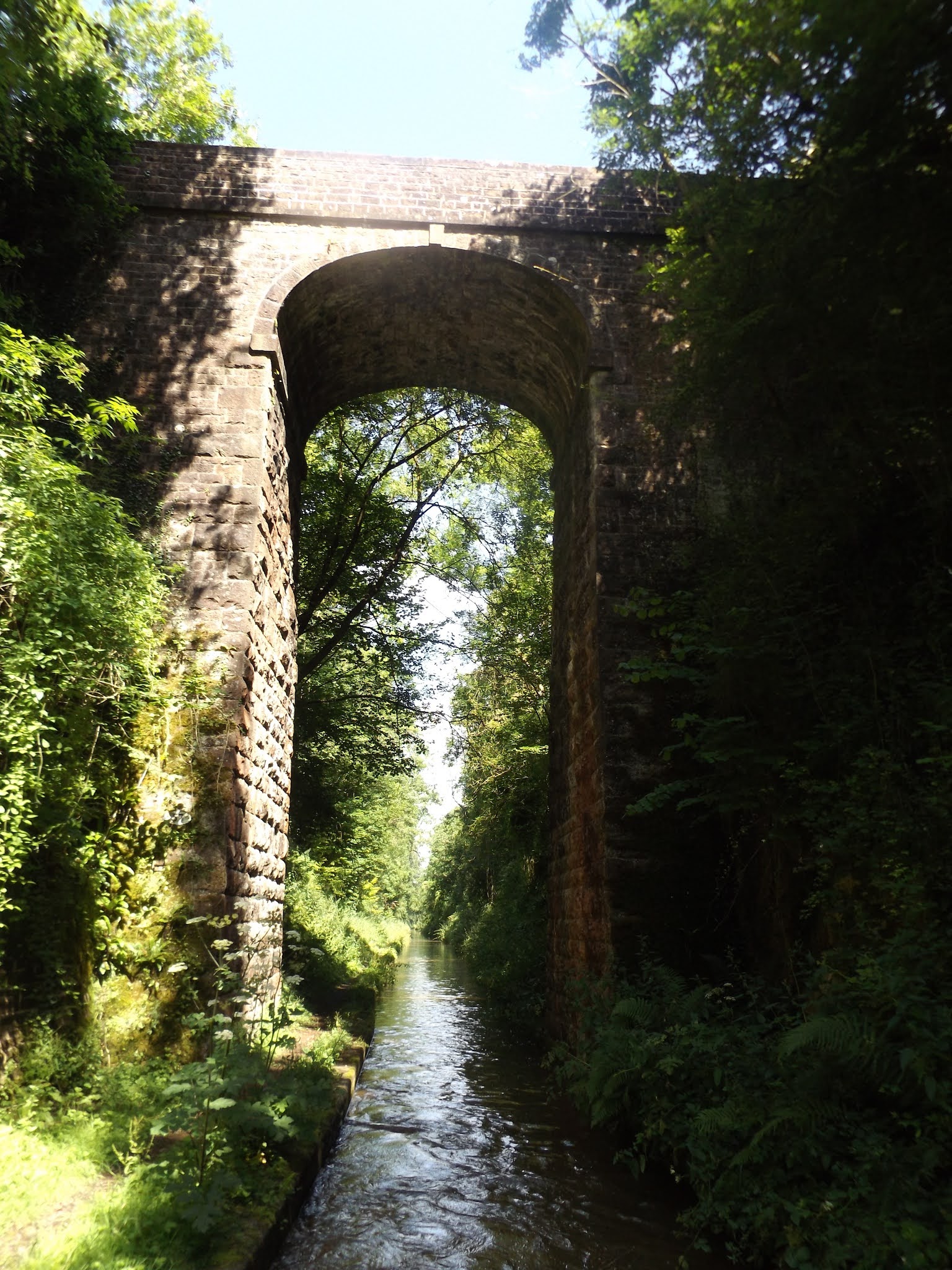 We managed to get nearly all the way through before meeting another boat, just north of Cheswardine Road Bridge. Just 20 minutes after emerging into the sunshine we pulled up on the moorings opposite Goldstone Wharf. 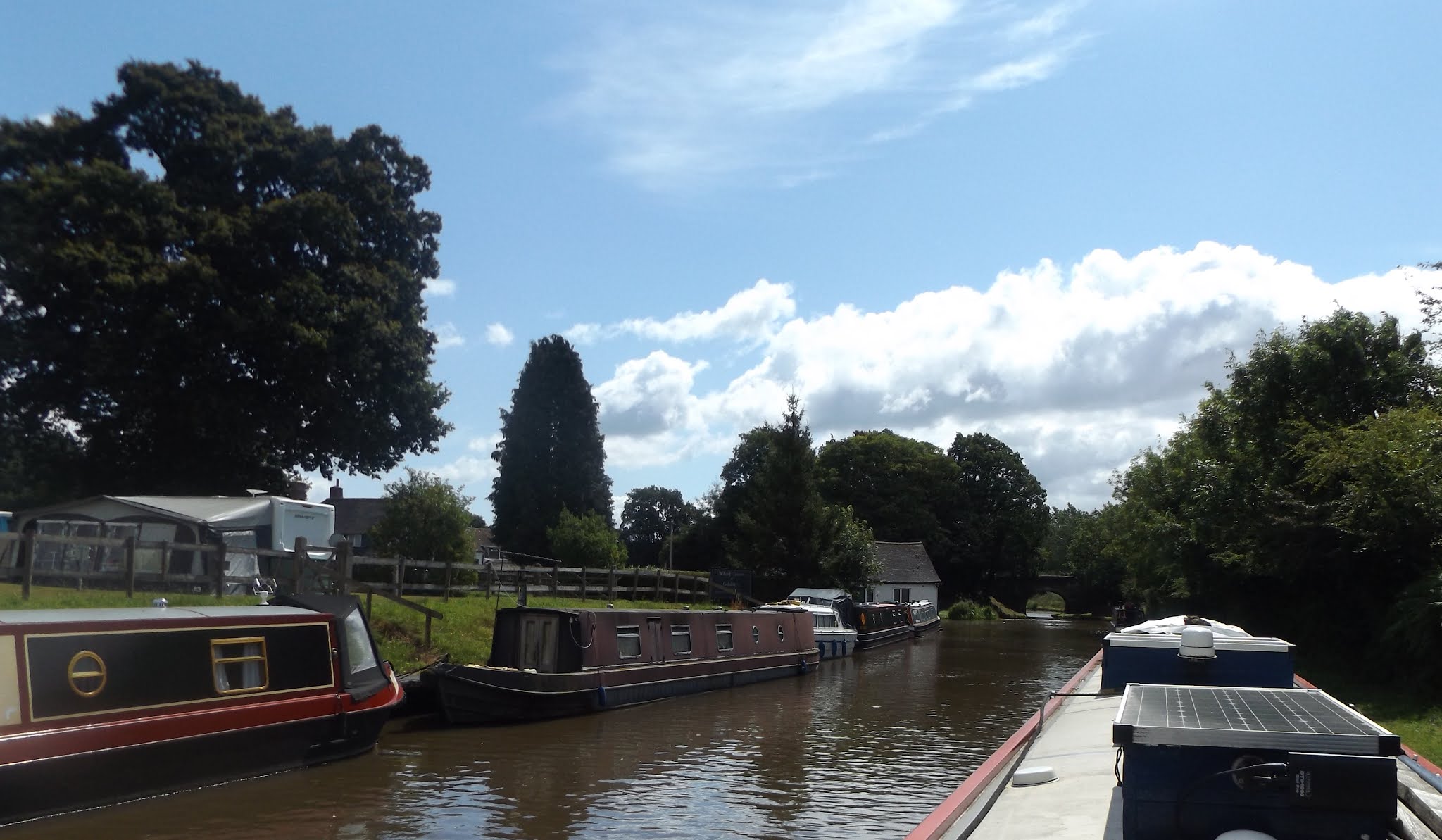