Our short stay at Bugsworth Basin ended this morning. I had my morning run, breakfasted then took Meg out for a walk around the old wharfs before we reversed past the other boats moored on the Lower Basin. Turning around just outside the services dropped us neatly onto the water point. 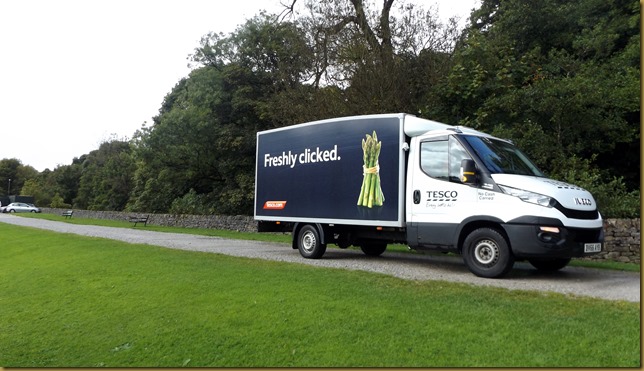 I wouldn’t have wanted to try this yesterday, it was blowing a hooley and frequently lashing with rain and hail. We weren’t the only crew to take advantage of this lull in the weather; several others left at around the same time.

We decided on a longish day, heading back to Marple then back onto then Macc. to head towards Kidsgrove again. I know, we’re supposed to be going to Manchester, and from here it’s only a few days to Castlefield. But we decided a few days ago to go the long way around, back to the Trent and Mersey, down the Cheshire Locks and onto the Bridgewater at Preston Brook. From there we’ll head into Manchester from the south. The reasoning was that it’s tough going for Mags going the quick way, 16 locks at Marple, 18 down the Ashton then a further 9 broad locks from Ducie Street to Castlefield. Going the roundabout route doesn’t reduce the number of locks but does space them out more, allowing us to have shorter days. And we do have the time, anyway. The event isn’t until the 15th of October.
Another reason is the condition of the locks. The Cheshire flight are well maintained and often duplicated so we’re unlikely to be held up by an emergency stoppage. But the same can’t be said of the Marple and Ashton locks. In fact -
“From Date:
11th September 2017 at 09:00
To Date:
until further notice
Type:
Navigation Closure
Reason:
Structure failure
Notice updates:
11/09/2017 @ 16:46
Over the weekend subsidence has become evident at Lock 15, Marple and we have had to close the canal here while this is investigated.  Following inspections on site today we are now concerned that there has been some movement to the towpath side lock wall as well.
Our engineering team will be undertaking a thorough examination of the lock over the next few days so that we can be clear about the true extent of the problem and what repairs are now needed.
Given the uncertainty about the full extent of the problem we cannot estimate a reopening date for the lock at the moment, when we know more we will be able to issue a further update.
We’re sorry if this problem has caused you delays but want to assure you that we are giving this highest priority.
Description:
We have had to close the lock flight at Marple until further notice due to subsidence at lock 15 . Our engineers will be carrying out inspections later today.
We understand that this closure may disrupt your schedule. We are taking every step to look into this problem as soon as possible and we will keep you updated of our progress.”
Not looking good, eh. We’ve seen several hire boats today heading for Bugsworth, having had to abort a Cheshire Ring cruise.

Having topped up the water tank and dropped off the rubbish and recycling, we were on the move again by half-nine. We had to be off quite early because Meg had an appointment to see the doggy-doctor at New Mills at 11:15. Nothing wrong; just her annual boosters, a check up and a new prescription for her arthritis medication.

If I moored here I‘d have been out with the shears and strimmer! 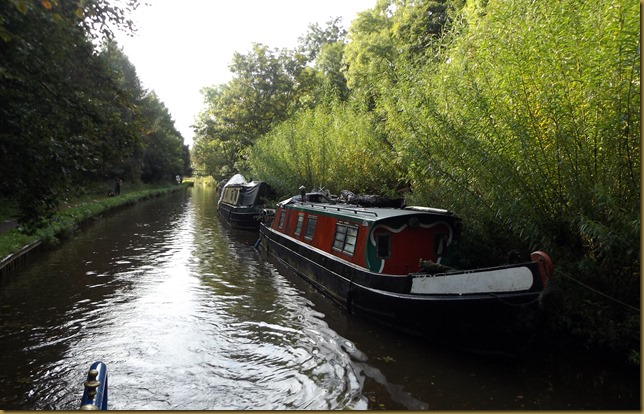 We arrived at New Mills with plenty of time to spare, mooring up just before the main road bridge. The vet is only 5 minutes from here. 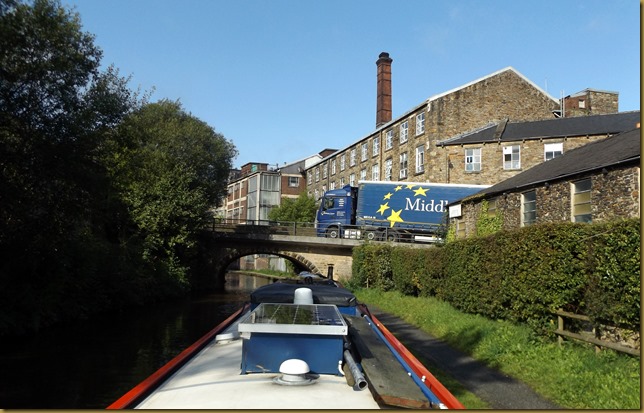 On the move again after a successful consultation, we were slowly gaining ground on a hire boat ahead. We just missed them at Higgins Clough Swing Bridge, seeing them toddling off around the corner as we turned up. 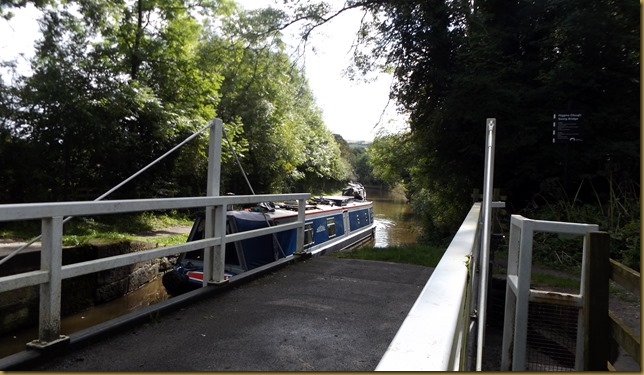 But we caught up at Wood End and followed them through. I shouted across that we’d do the next one, Turf Lea, forgetting that, unlike the electrically operated Wood End, Turf Lea requires 80 turns of the windlass to lift! Anyway, they followed Mags through, and then we waited for another boat coming the other way.

Moored near Bridge 21 is a boat called Del Boy, with an unusual take on a cratch cover. 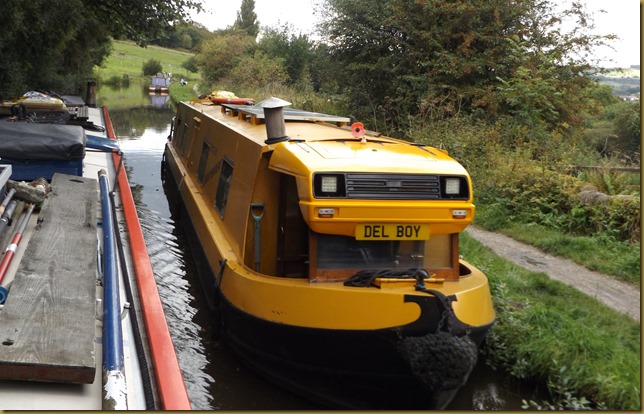 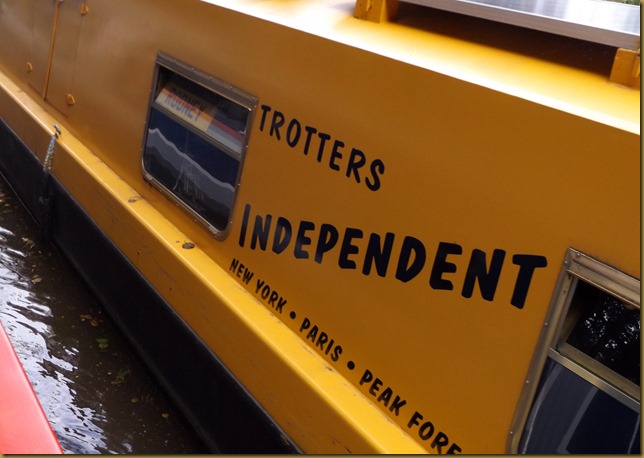 Quite clever really. Not quite true to Del and Rodney’s iconic 3 wheeler, this is the front end of a Reliant Rialto rather than a Reliant Regal Supervan III. But 10/10 for effort.

We turned left at Marple Junction, back onto the Macclesfield Canal. The right turn down the locks is out of the question for the time being anyway. 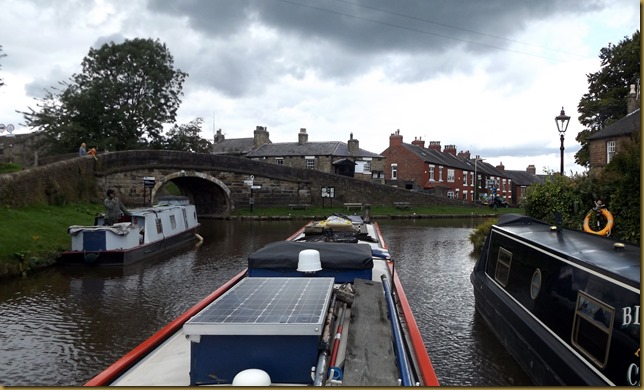 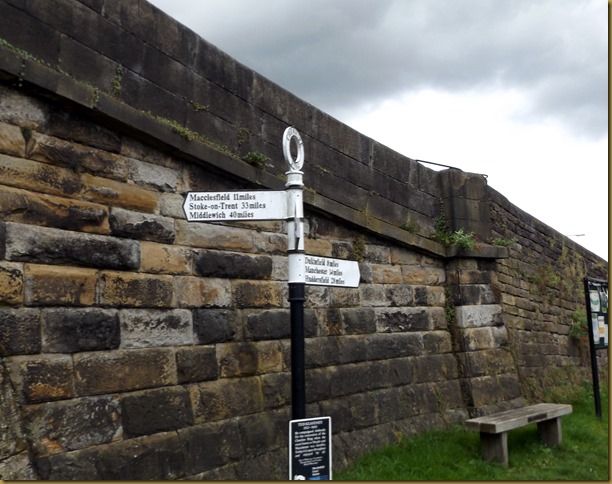 Unusually both the service wharf and the moorings opposite had space! 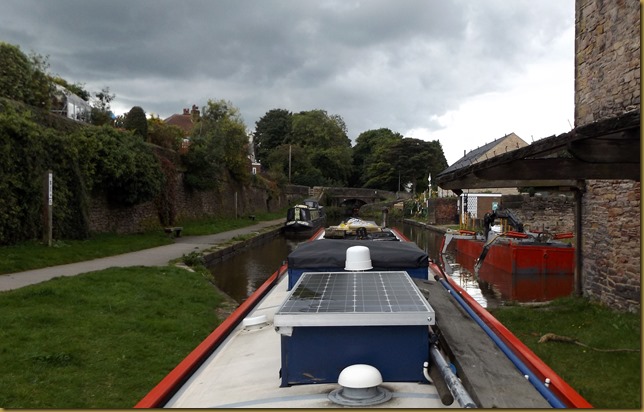 Typically we didn’t need either today.

A little further on we passed a familiar boat NB Gloriana, I gave a shout and Nick came out for a chat. It’s a while since we seen each other. 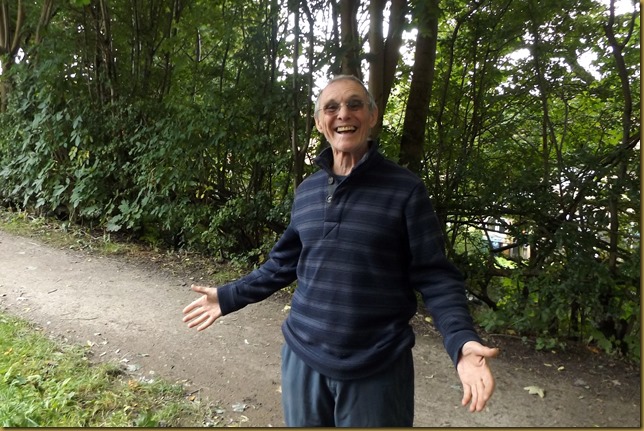 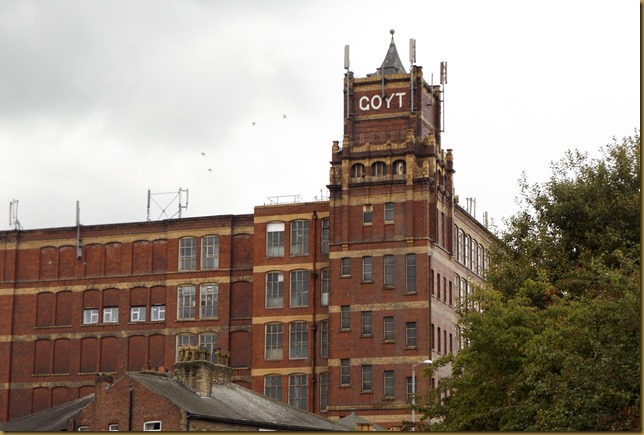 We pulled in between Bridges 7 and 8, pretty much where we stopped on the way north.

Everything is tied down now, in preparation for what promises to be a wild night…

Hey, Doug, James. Good to hear from you. If you've read this far you'll know that your kind offer of assistance down the Ashton and Rochdale locks isn't necessary, but much appreciated nevertheless. We will be in south Manchester in the middle of next month, and may well head up to Castlefield from there. If you're free when we get there it would be great to see you.