We’ve stayed here in Trevor Basin for the weekend. Unlike a lot of other boaters we can’t post any pictures of snowy scenes, we’ve not had any! Just some sleety stuff yesterday afternoon.

It has been cold, though, up until yesterday. When I walked back across the aqueduct to meet  Chas and Ann on Thursday afternoon, I crossed under the Froncysyllte end of the span and spotted this. 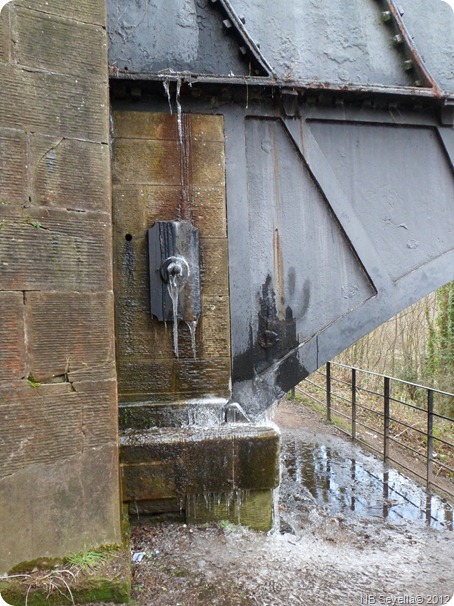 And on the other side too… 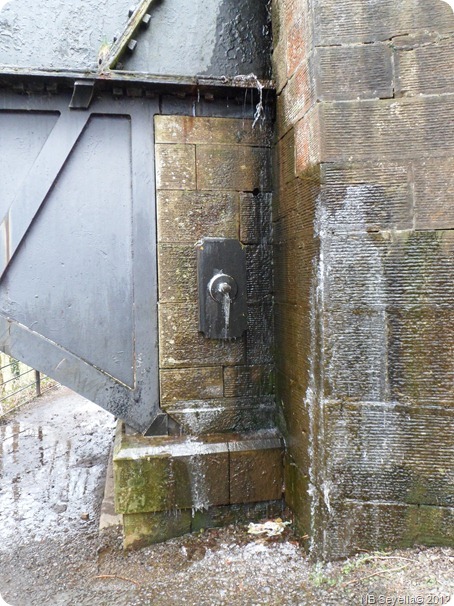 I had a chat with the BW area engineer on Friday in the basin. Apparently this happens during cold spells. The iron trough contracts enough to pull away from the clay seal in which the ends are bedded. The gaps seal up again in warmer weather.
The trough is just over 1000 feet long, so, taking linear thermal expansion of iron as 1.2 x 0.0001 /°C that’s a change in length of around 2 inches from around 0°C in a cold period (like now) to a summer water temperature of maybe 15°. No wonder it dribbles a bit!

We’ve had a few good walks, most taking in some part of the aqueduct, either above or below.

Looking along from the Trevor end 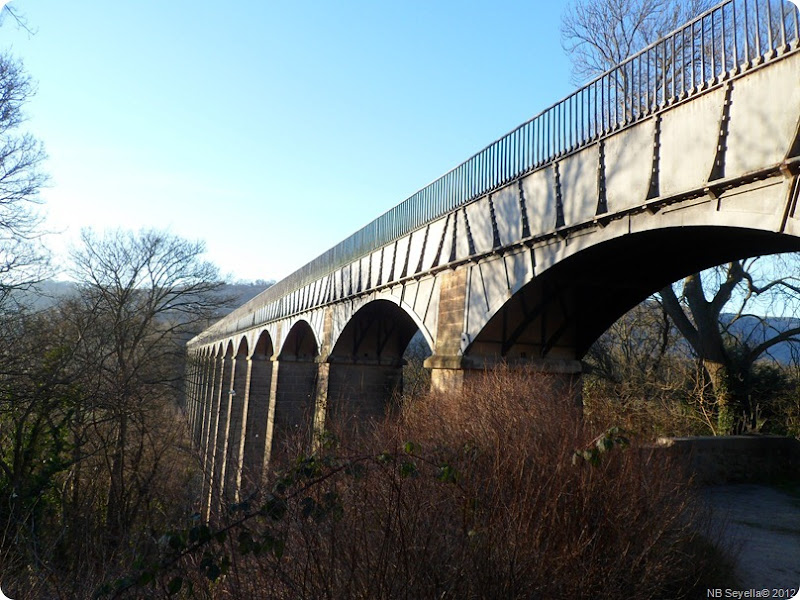 And from the bank of the River Dee below. 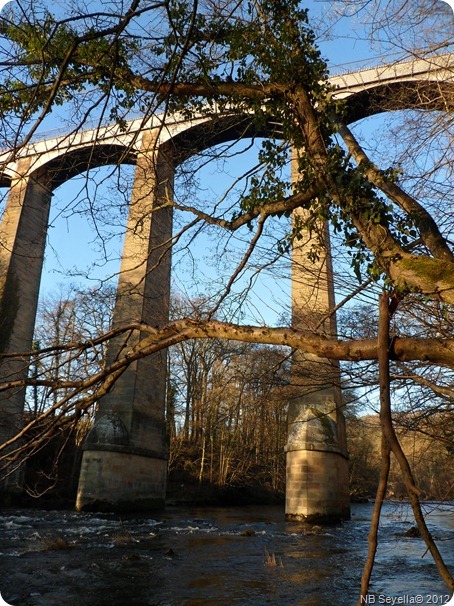 You can tell why the design was met with scepticism when it was presented. Compared to contemporary structures it looks impossibly light and flimsy. 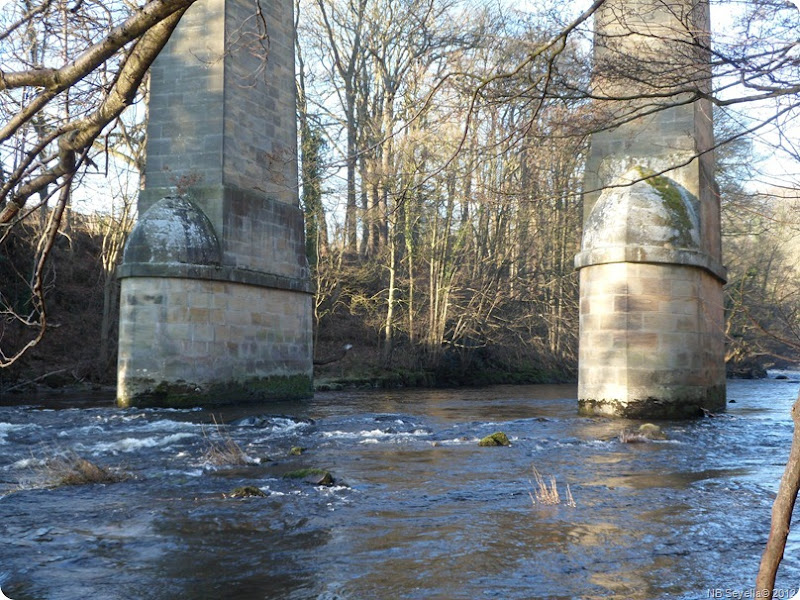 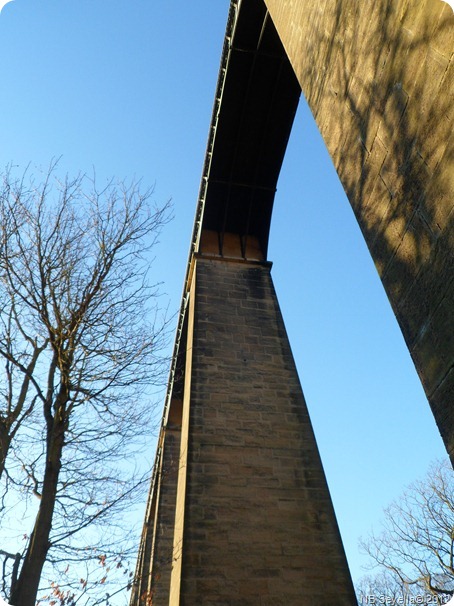 The nineteen support pillars are mainly hollow and carry the trough 127 feet above the river. At the top of each, webs of cast iron arc out to support the span. 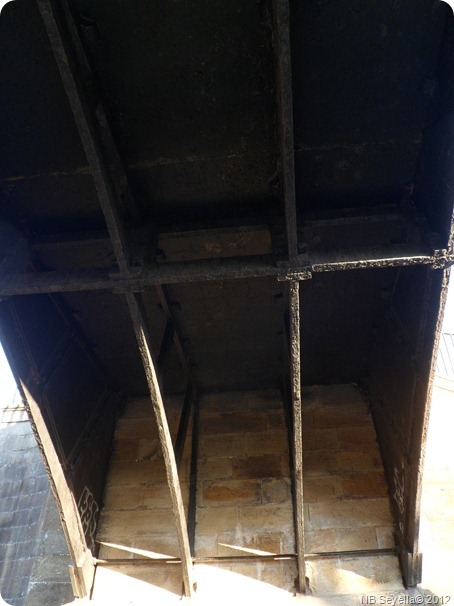 The structure took around ten years from conception to completion, and opened in 1805. A foundry was specially built at Plas Kynaston to cast the ironwork. Cost then was about £47,000. Adjusted for inflation, maybe £3bn in today’s money. A few banker’s bonuses, then.

Thomas Telford has been credited for much of the design work, but there was also considerable input from another very able engineer, William Jessop.

Jessop was actually Consulting Engineer for the Ellesmere Canal Company, and supported Telford’s appointment as Resident Engineer. Jessop had cut his canal building teeth in Ireland, supervising the completion of the stalled Grand Canal from Shannon to Dublin. He re-surveyed the route, proposed changes and ensured that the canal could be finished. During the construction of the Ellesmere Canal (now the Llangollen) he was Chief Engineer to the Grand Junction Canal, now the Grand Union Main Line, from Braunston to Brentford. This was probably his most successful canal project, ninety miles long with two tunnels.
After this he moved on to design and construct the West India Dock in London, and then shifted his talents to railways. He is credited with the building The Surrey Iron Railway, arguably the first passenger railway, in 1802. Although horse-drawn, it predated the Stockton and Darlington by 23 years.

We are moored in what is know as Trevor Basin, but it was intended to be the main line of the canal to Chester. 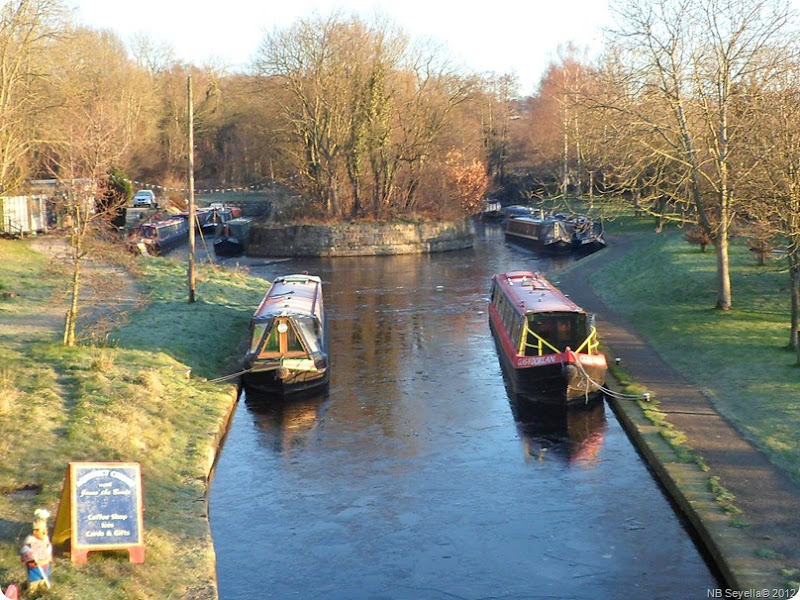 The canal ends just a few yards behind the last boat….

Yesterday we had visitors, Val and John and their daughter Carol, very good friends. They brought our mail and my parts for Project Cosy Toes, so that can go ahead now. They also brought the two Dachshunds, Harry on the right, and Jeffrey Raymond Kenneth (don’t ask… ) on the left. 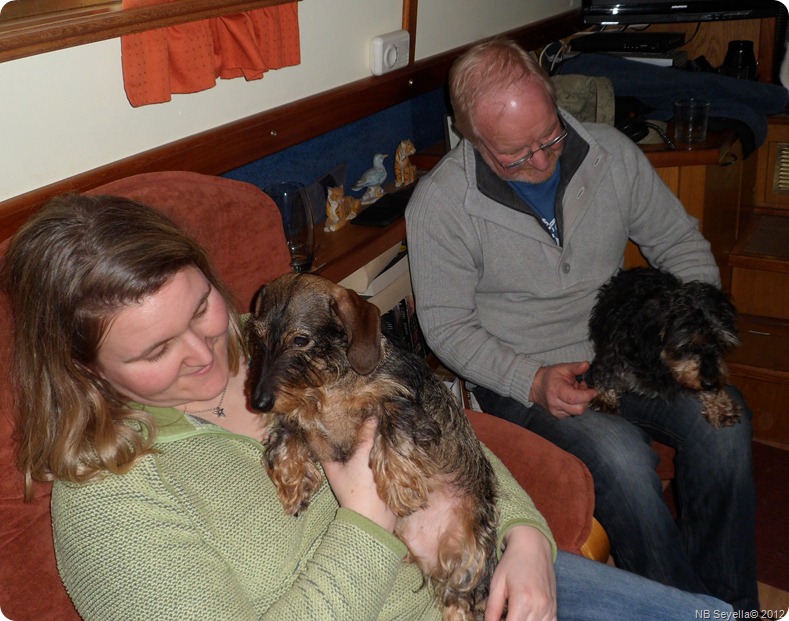 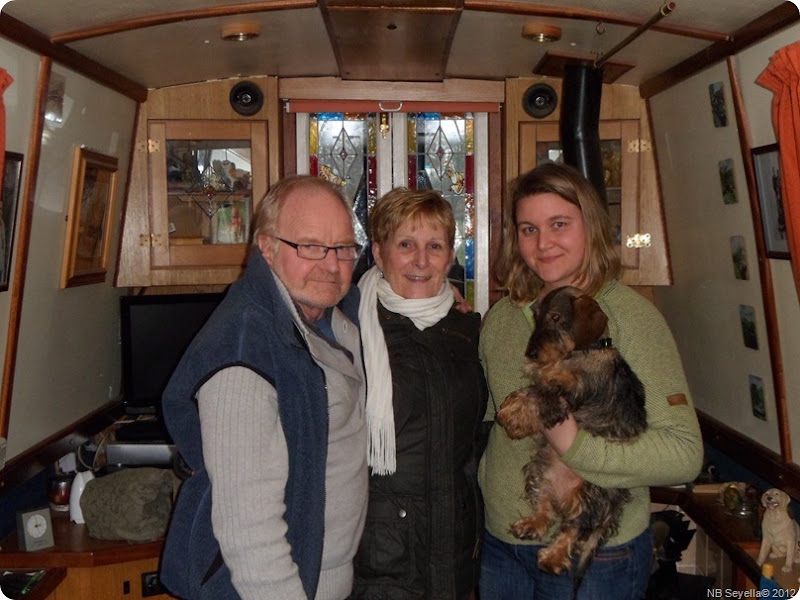 No, it wasn’t cold in the boat (as if!). They were just about to head home. Good to see you all.
Incidentally, Carol is the “Pizza Lady”. She makes and sells chocolate pizzas as boxchoc.co.uk. Excellent they are too. I can now recommend from first hand experience. The orange and chilli flavour is AWESOME! Go on, give it a try. You know you want to….

This morning I gave George a hand to straighten the frame on their pram hood. Why, you ask, did it need straightening? See here.

Moving on tomorrow, four miles or so to Llangollen and the end of the line.

Amazing photographs of the aqueduct!
I'm sure you will know this site about it's building - but just in case here it is for you to enjoy, http://vimeo.com/2267361

Lovely photos - that's our home turf. In fact NB RockNRoll have a photo on their last blog of the gap that is our mooring on their way past the Limekilns at Froncysyllte - we're not there as we cruise Sept-March and currently frozen in at Fradley. Enjoy Llangollen, the last few miles is a beautiful cruise. Sue www.beefur.blogspot.com

Hi Graham
I hadn't come across that site, so thanks for the link. What an amzing structure it is!

Thanks Sue, hadn't realised this was your patch! Frozen in at Fradley, eh. Still there are worse places...
Happy cruising (when you get going)