We’ve had an enjoyable few days in Llangollen. It’s a pleasant town, with a good range of shops and some interesting buildings. But we didn’t spend all our time there; not when there’re are equally interesting but more remote places to see….

On Wednesday, under cold grey skies we heading off on foot up the last 1½ miles of the canal to Horseshoe Falls. Very shallow in places, this is not navigable by private boats, but, during the season, a pair of horse drawn passenger boats go from Llangollen Wharf to Chain Bridge Hotel, just a few hundred yards from the source of the water that runs the 46 miles to Hurleston Junction.

The first sight of the start of the canal is a bit underwhelming, a flow of water bubbling up below a building which houses the metering and valve systems, controlling the volume of water extracted from the River Dee.

Start of the canal. 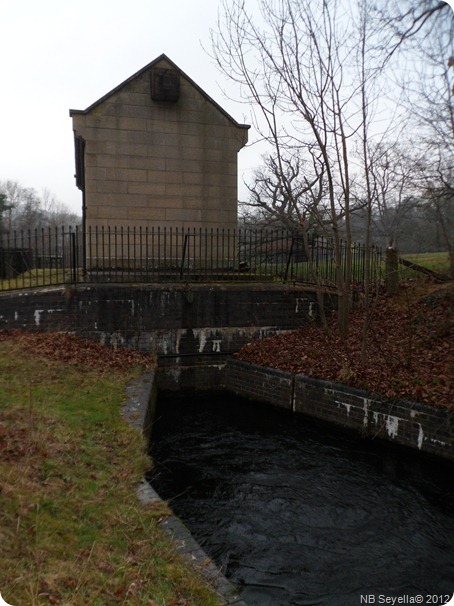 Just step around the other side though, and you’ll come to the weir which holds back the water to provide a head for the canal. This is Telford’s Horseshoe Falls. 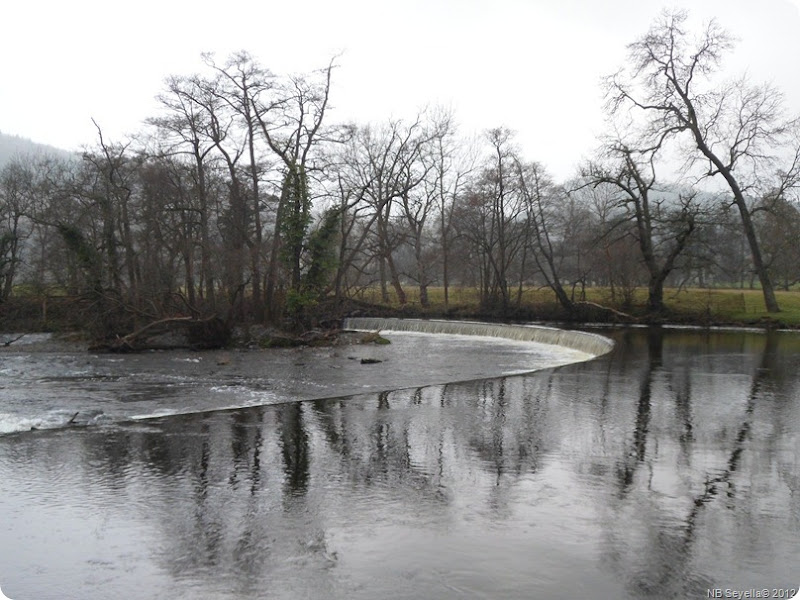 Meg just HAS to sample the water…. 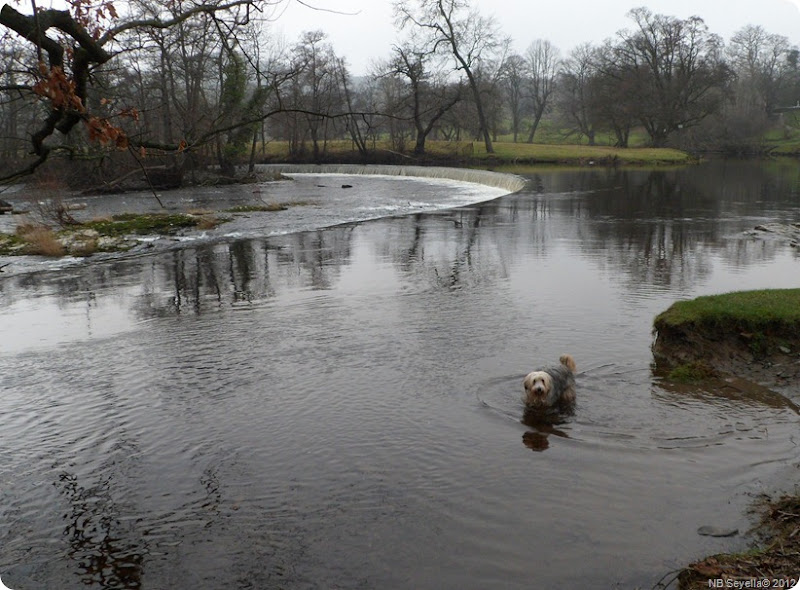 The water for the canal is diverted off to the left, and disappears under this disreputable looking bunch…. 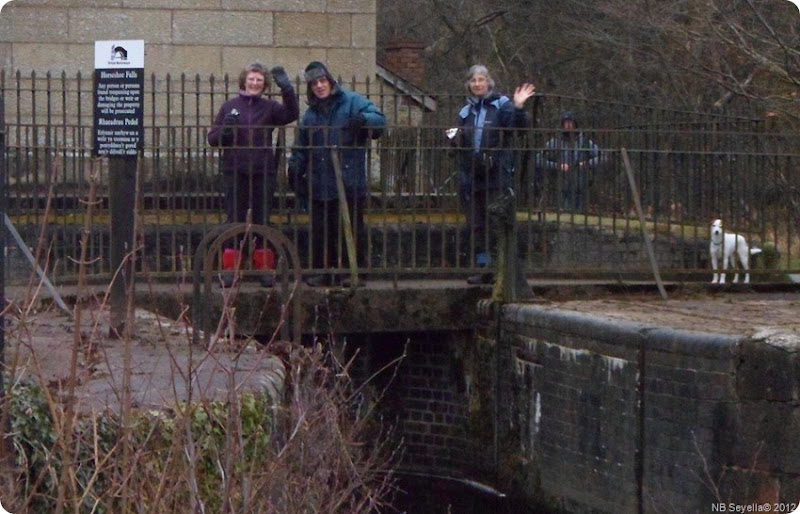 We didn’t hang around for too long before setting off back, it was pretty cold!

There were some who were prepared to endure the cold water, quite a few hardy souls were in canoes on the river and on the canal.

Canadian canoes on the Dee. 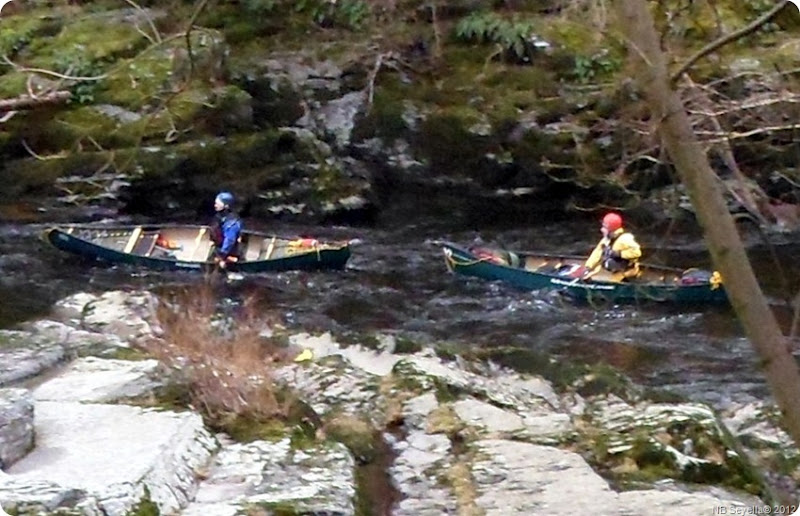 Yesterday was a bit more exerting, we decided to go up the hill to Castell Dinas Bran.
It’s not far from the canal, but it’s almost the same distance vertically!

From near the canal basin 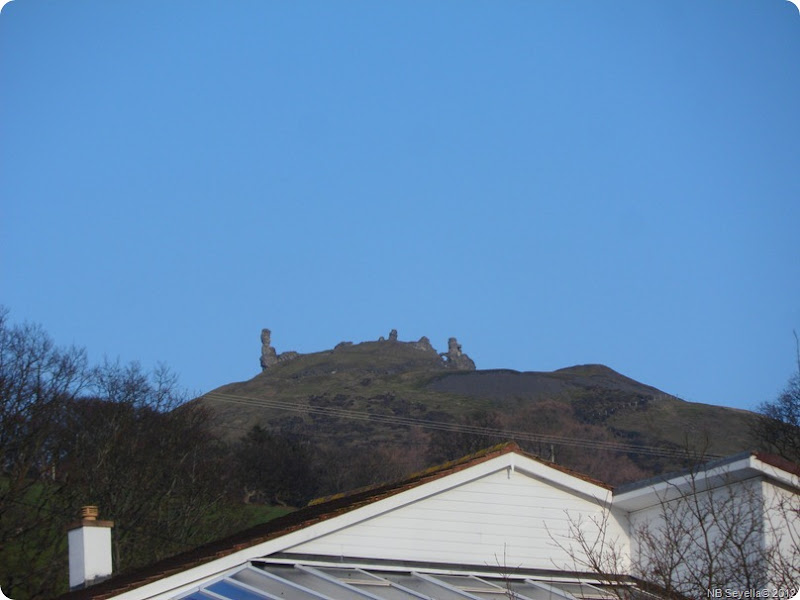 Maybe halfway up, the steepest bit is to come… 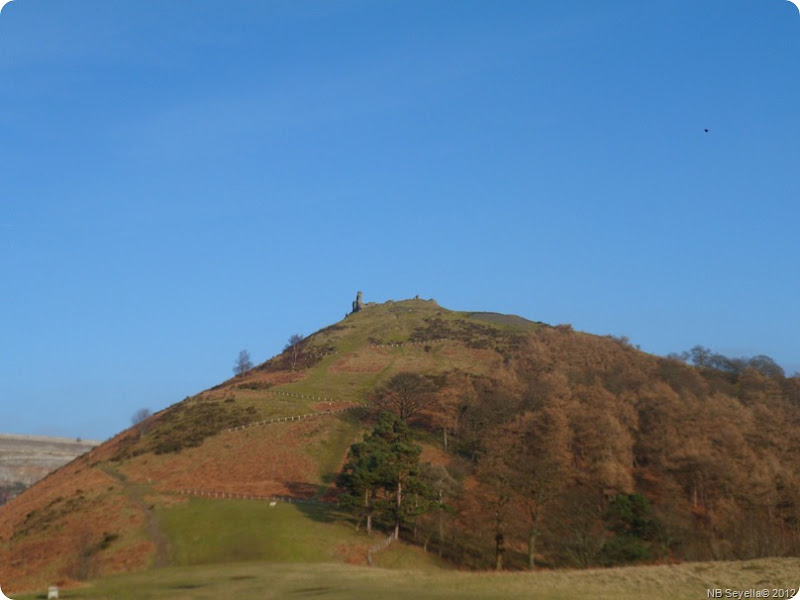 That’s it, the view from the top, looking up the Dee valley. 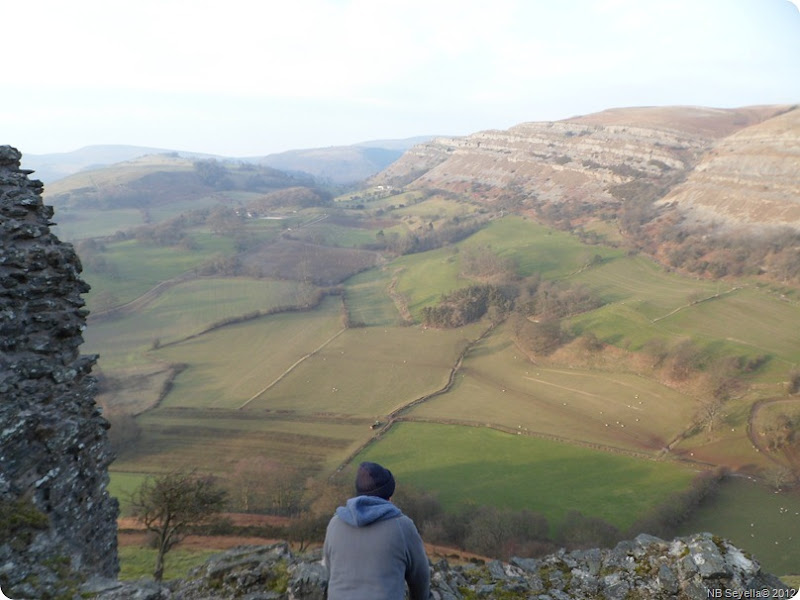 And down the valley towards Trevor 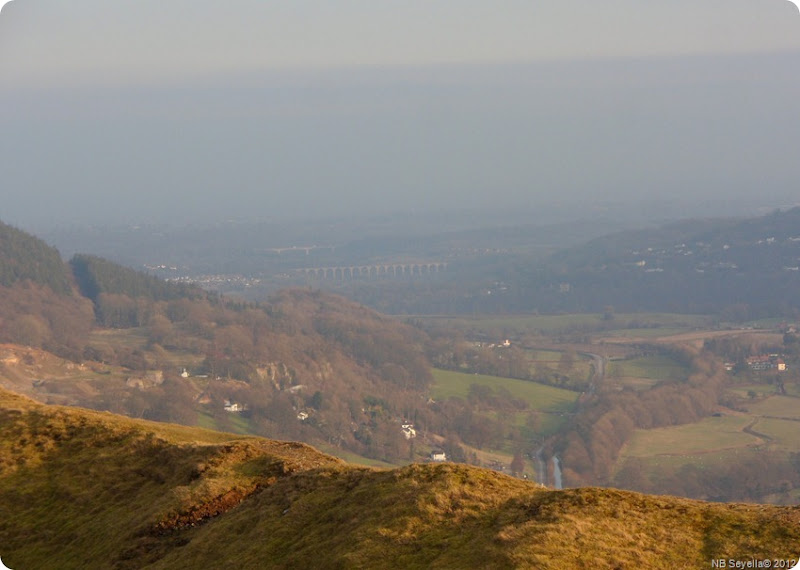 In the middle of the picture is Pontcysyllte Aqueduct, 3 miles away. Another 2 miles and there’s the A5 crossing the Dee.

As you can see, it was a far better day than the previous one!

Panorama over the valley to Llangollen

Apart from the magnificent views, it’s worth the climb to see the ruins of this 13C fortress. 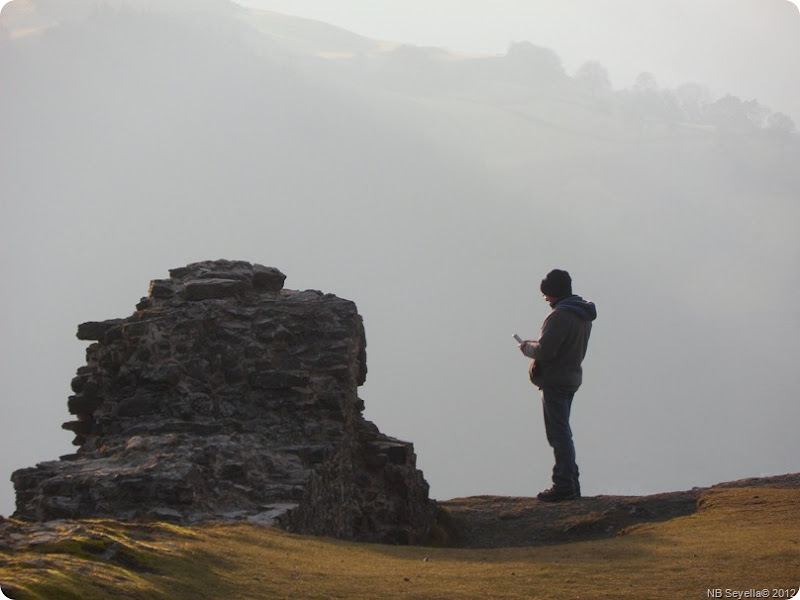 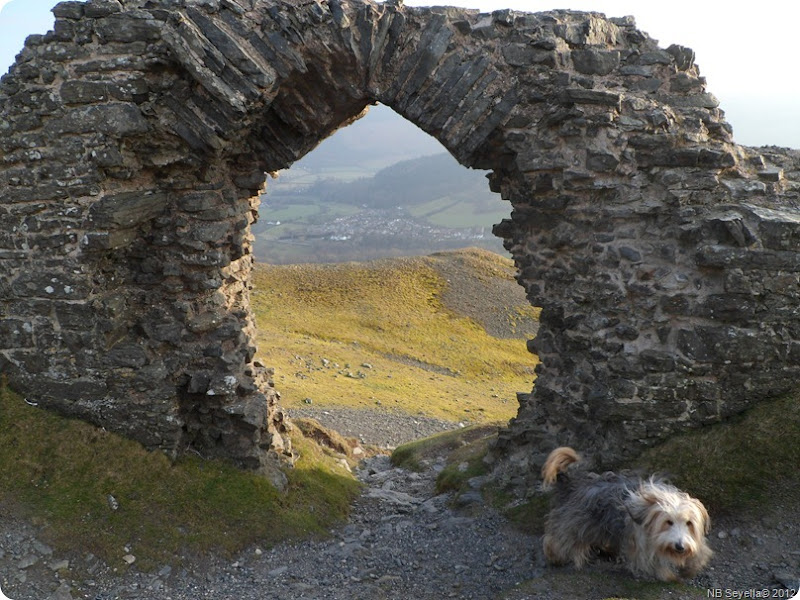 It must have been tough living up here…. 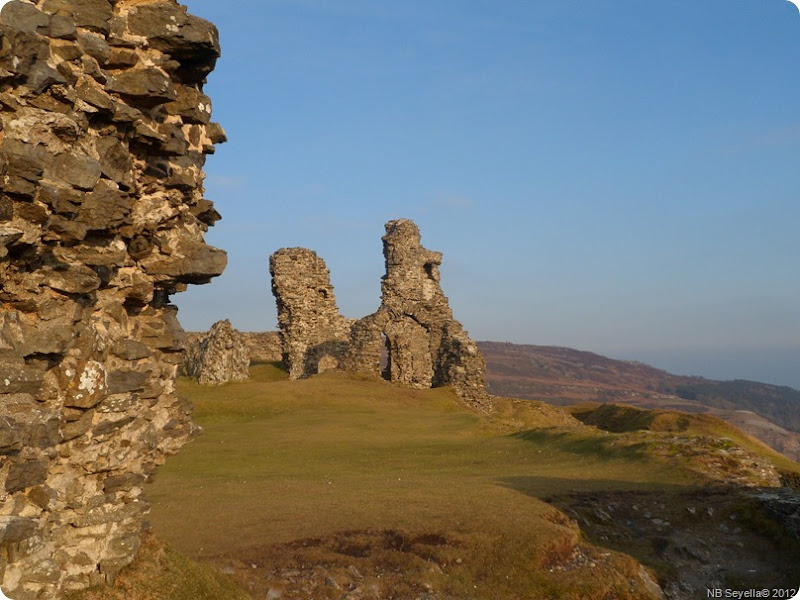 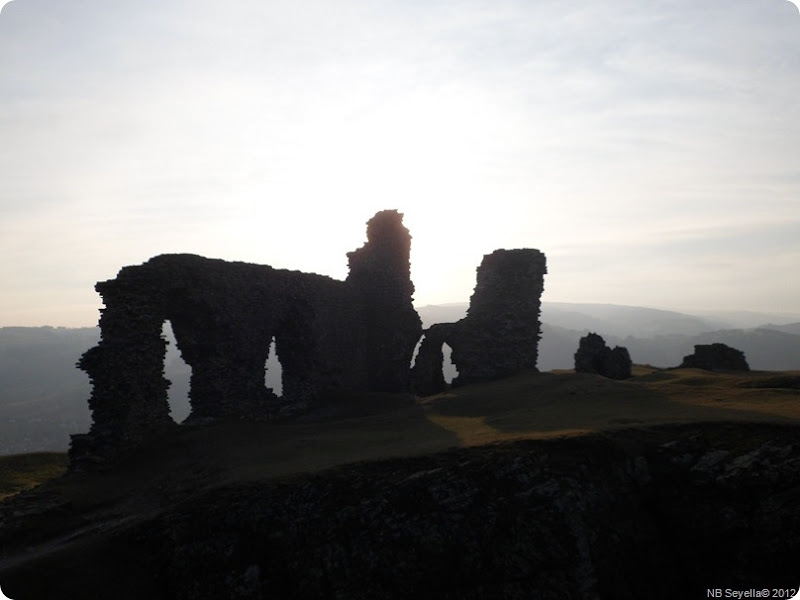 What a very good couple of hours!

Micro-heater fitted next to the calorifier. 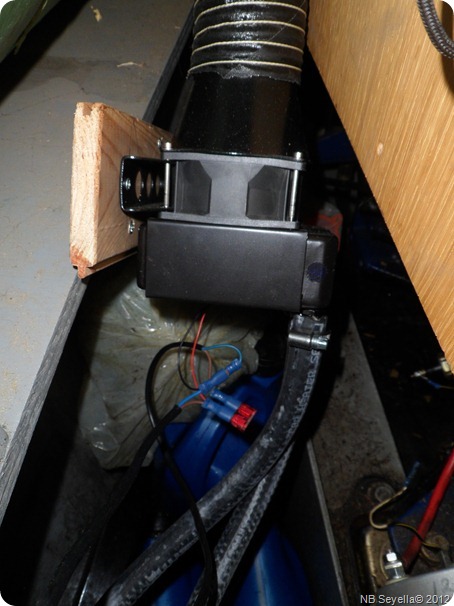 Run from from the heater pipes on the engine, these are designed for kit-cars or classics where a heater was an optional extra. I’ve tee’d off the flow and return lines to the calorifier, with valves so the unit can be isolated. The large air hose leading off at the top of the picture leads to a vent…. 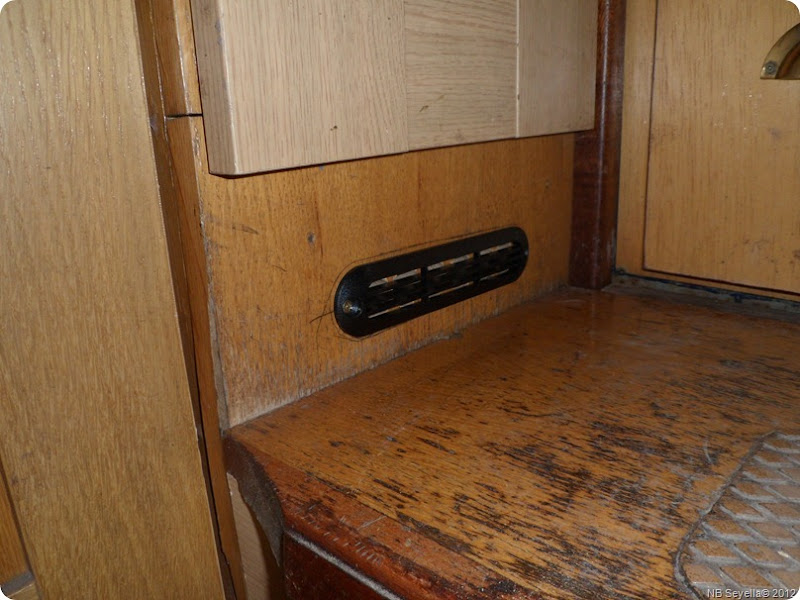 After another very cold night which left a thin skin of ice on the surface of the basin, the day warmed up and turned to rain. Typical Welsh rain. Persistent, insidious, penetrating. Though, having spent a fair proportion of my youth up in the Welsh mountains, not unfamiliar.
Not a good day to cruise, but we did anyway.

We had to make a stop at Llangollen Wharf to meet a delivery of 10 bags of solid fuel from the local hardware store. It’s a private wharf, used by the trip boats, but the horse drawn ones are laid up at Froncysyllte, and the Thomas Telford had left for a trip across Pontcysyllte Aqueduct and back. I’d already checked that it’d be OK, as well. 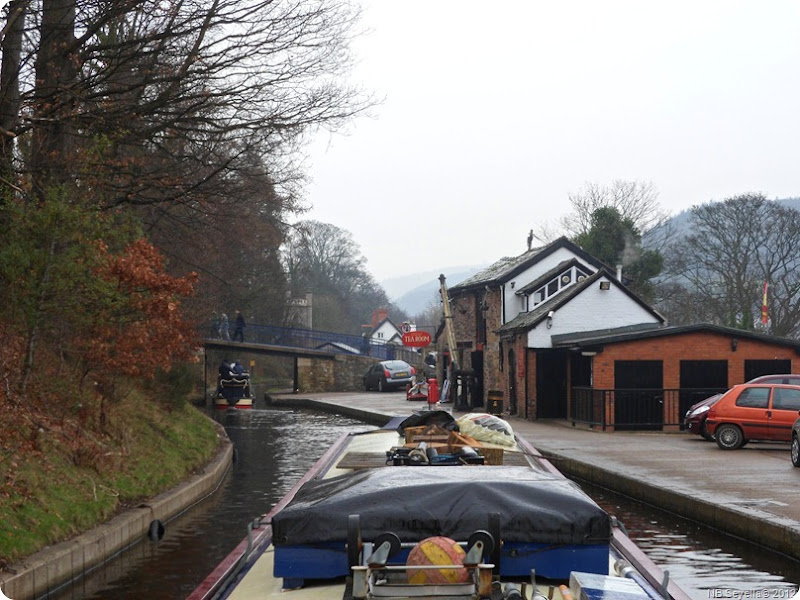 Fuel loaded, we moved on a short distance to the service wharf to empty a poo tank, then set off in pursuit of the rest of the convoy.

It is recommended that a crew member be sent ahead on the single-file sections leading out of town to warn of approaching boats. But, to save Mags having to be out in such damp weather, George had agreed to let me know if there was anyone coming the other way. As it turned out we didn’t see another boat till Trevor.

We’d expected to meet Thomas Telford heading back to Llangollen somewhere just this side of the aqueduct, but a phone call from Ann, then another from Carol, warned us of a potentially “interesting” encounter. Yes, she (he?) was heading back, but was towing the two horse boats back as well. That must have been a sight to see, coming over the aqueduct!

I took it very slowly over the last few hundred yards, expecting to see this “train” appearing round a bend, but didn’t see them till we came under Rhos-y-Coed Bridge, at the end of Trevor Basin.

James Brindley was being poled into the dry dock… 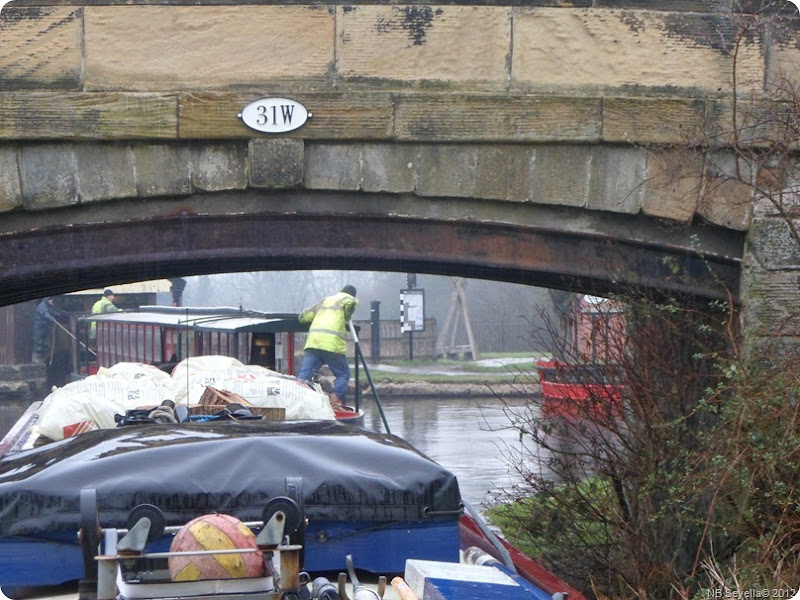 ….William Jessop was (almost) tied up out of the way. 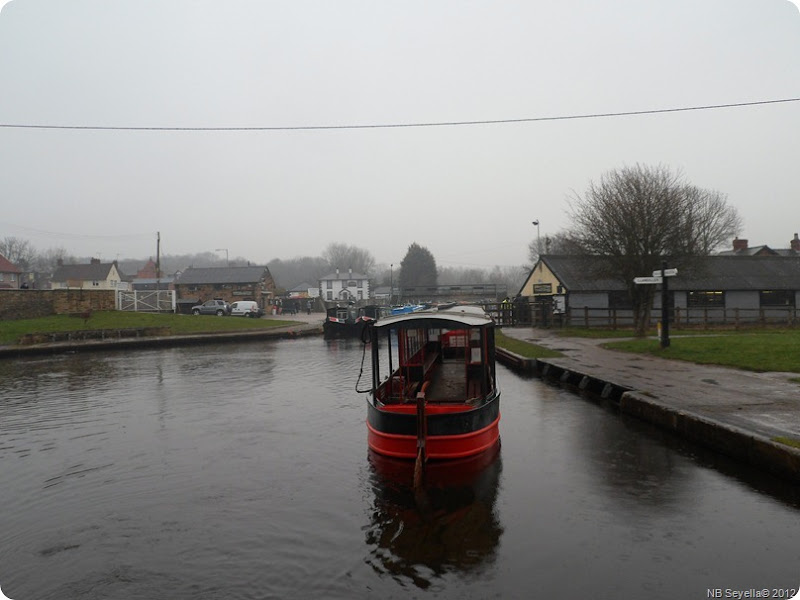 Thomas Telford had slotted in between the hire boats.
The horse boats are double-ended, the rudder can be hung either end. They can’t be turned around on the feeder, so they just hook the horse up to t‘other end and tow it back again.

With these obstacles out of the way, we had a clear run across the aqueduct.

Not that we could see the far end anyway…. 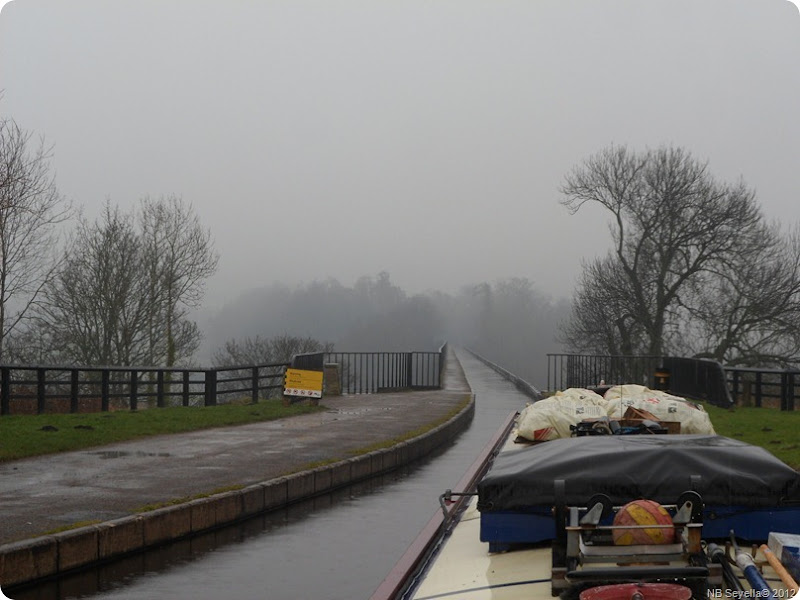 Certainly murky in the hills. 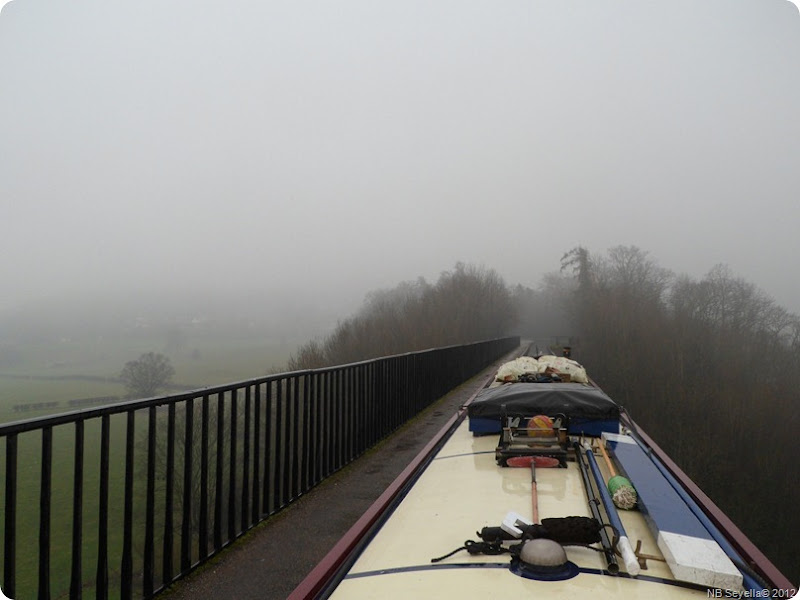 Two miles further on and we caught up with Rock’n’Roll and Moore2Life moored near Chirk Marina.
The Rockers are facing the other way as they’ve guests tomorrow and they’re going back over the Ponty. I hope the weather is a little better than today’s.

It’s been a pretty dismal sort of trip, but I’ve had lovely warm feet!

Hi John and Liana. Thanks for the comment. Weather looks a bit grim for the next couple of days, improving early next week. There's no ice on the main line, but there might be a thin layer in the off-line marinas and basins. We'll keep an eye out for you as we head back. Enjoy your trip.

Thin layer of ice? We've still got over two inches up the town arm here!
Really getting fed up how!

Hi Both
Get the thermals out, it could be -10 in the countryside tonight. Are you sure you don't mean 3"?
Seriously, is there anything you need? We may be coming over that way on Sunday - by road. Hope you're feeling better. Drop us a comment if you're short of anything.
Cheers.