After thirty-six hours of continuous heavy rain, followed by a day of drizzle, the Midlands and north-west are suffering with flooded roads, fields and houses. The navigable rivers are up as well, with closures on the Trent, Soar, Weaver, Severn and even the Droitwich Barge Canal where the River Salwarpe runs close alongside. The river sections of the Calder and Hebble are also affected.

The Llangollen hasn’t got away with it either. Between Marbury Lock and Wrenbury Frith Lift Bridge the piled edge of the canal bank has failed, forcing the closure of this section. 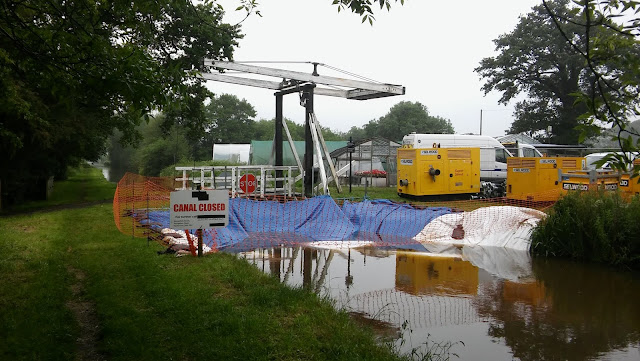 Luckily we’re past that bit, but the ABC hire base has ten boats on the wrong side of the stoppage so they’ve considerable disruption to deal with as they re-schedule boats to and from Whitchurch.

The breach doesn’t look much, puddle clay protected by a plastic sheet currently keeping the water back, but the culvert alongside has undermined the embankment too so the repair will involve reinforcing that as well as re-piling the canal edge. not a quick fix… 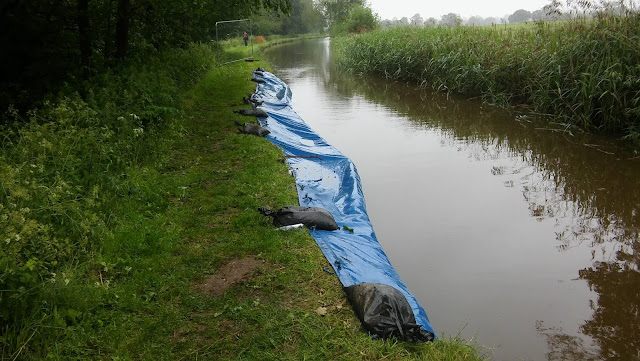 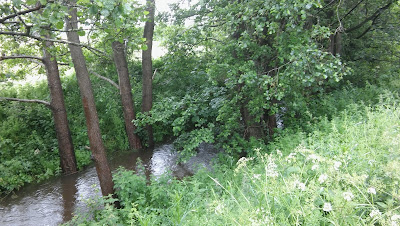 So if you’re planning a summer trip up here check the website for updates first - https://canalrivertrust.org.uk/notices

The weather is looking to improve a little going forward, we even had a splash of sunshine this afternoon! 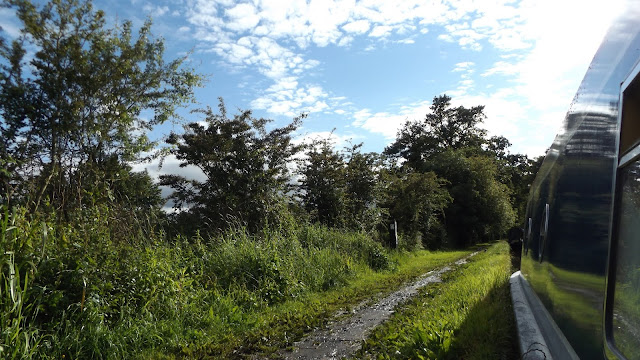 More rain overnight though before it finally clears off elsewhere. We’ll also be clearing off tomorrow, heading towards Hurleston.

On the subject of water, I’ve done a bit of a modification on the plumbing for the washing machine. As are most these days, ours has a cold water fill but we’ve always got hot water available as we have to run the engine while doing a wash load. I should point out that we can heat water three ways – from the engine heater circuit, from the Webasto boiler that also runs the radiators and from an immersion heater when we’re plugged into the mains.
It seemed a shame that we couldn’t utilise this spare hot water so I did a bit of a mod some years ago, which did help a bit but wasn’t a full solution.

Now I’ve made a proper job of it, with valves to control the water flow. 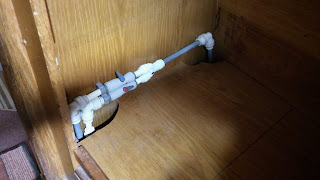 Hot on and cold off to fill, hot off and cold on to rinse. The valves are fitted against the rear cabin bulkhead, easily accessible from the steering position while cruising.