I’ve decided to replace the hard disk drive in my aging HP G56 laptop. It has an Intel dual-core 2.3Ghz processor and 8 Gb RAM (already upped from 2Gb) so those bits are OK for what I need, but the HDD could be improved.
Another reason is that I will shortly need another 500Gb external drive for backing-up my files and photos. The images you see on this blog are a fraction of those that I take, and I keep them all. They’re all taken at maximum resolution on my Canon SX170, and can be up to 7Mb in size.
Replacing my existing drive means that it can be installed in a case and used as a back-up. So the cost of the new one is offset by not having to buy another external drive. It’s a shame that the laptop doesn’t have a spare drive bay, then I could leave it in! 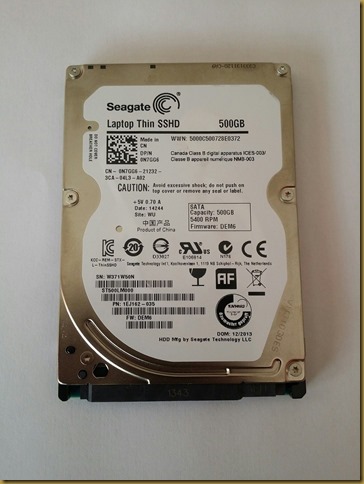 I’ve opted for a hybrid drive, combining the speed benefits of flash memory with the capacity of a conventional mechanical drive. The Seagate 500Gb SSHD that is on it’s way has 8Gb of solid-state storage, and a 500Gb traditional drive. Storage is split between the two, boot and regularly-accessed files are stored on the flash memory, less frequently used files on the drive. The split is managed by an onboard controller which determines what goes where.


Of course, the most efficient replacement would be a completely solid-state drive, but the bang-to-bucks equation doesn’t work for me.
A comparison of costs for the three different drive types shows that a conventional 500Gb drive is around £25 to £35, a SSHD comes in at between £45 and £60, but a fully solid state drive is well over £100.
Booting from the flash portion of the drive should give substantial improvements in start-up time and launching of frequently used applications, and a SSHD uses less power than a fully mechanical drive, which means that the laptop battery should last longer. I could have gone for a 1Tb drive, but being as I rarely use more than half of the 500Gb currently installed, there’s not a lot of point. In fact, why didn’t I get a 250Gb SSHD??? There doesn’t seem to be a smaller one than 500Gb on the market. SSD yes, SSHD, no.
So I suppose I could have gone for a 250Gb SSD - still another £20-£30 though!

Apart from the drive the only extra bit of kit needed is a cable to connect the new drive to a USB port to enable the copying of the current drive. I’ll be using cloning software, that way there’ll be no need to re-install anything, just swap the drives over when it’s done…

I’ll be posting again afterwards. Assuming of course that the laptop still works!

Hi Tom. As you can see, I've gone hybrid rather than pedigree!
KevinToo, watch this space. I'll let you know how it goes...
Carol, tell George that cloning should avoid the need for formating and partioning the new drive - hopefully!
Posted by Geoff and Mags at 12:49 pm